Happiness is a choice that requires effort at times. 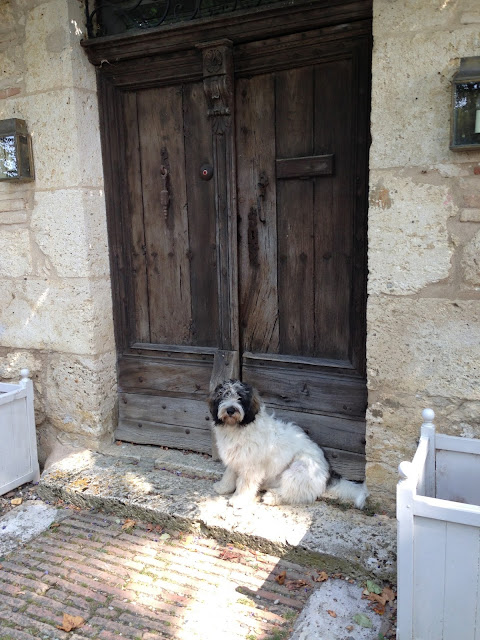 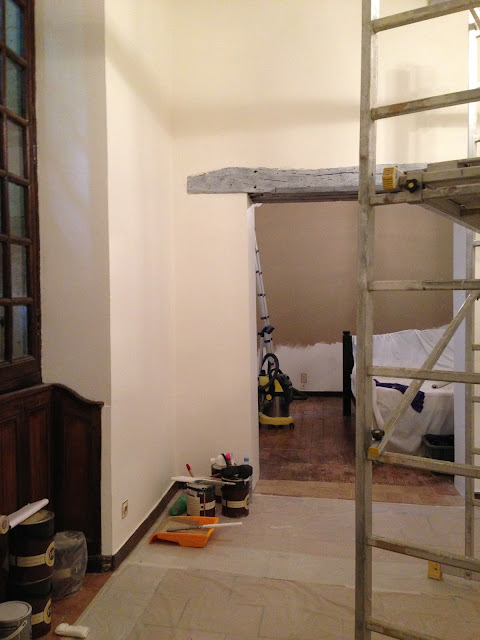 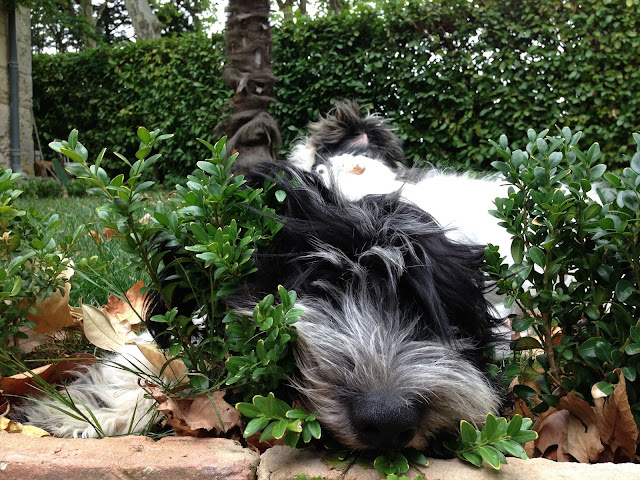 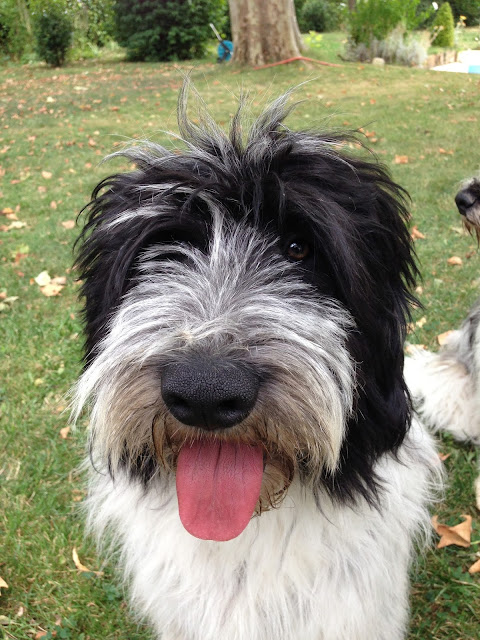 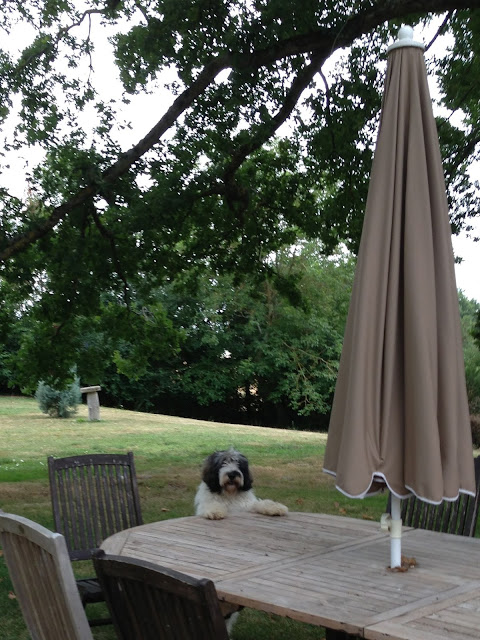 Into the car to buy our morning croissants . Outside the garlic processing plant a demonstration. A dozen or so local farmers throwing garlic cloves onto the dual carriageway.  Two large banners. The larger says  " We have come here today to claim a fair price for this years harvest " . The smaller " Stop cheap Spanish  imports ! French quality the best !!  ".  By the time we return the farmers have disappeared. The smell of crushed garlic lingers.

Bob and Sophie are groomed. Bob's hair lightly trimmed. We can see his eyes and he can see us. Sophie adores being groomed. Bob suffers the indignity, largely but not entirely, in silence. Ten minutes after being groomed they both look like they've never been brushed in their lives.

Aude the decaratrice is painting the dark wooden ceiling beams. '' Should they be white or grey ? ". Angus has no opinion on this. After ten minutes of having the differences pointed out to him he still has no opinion. Aude decides to wait for ' the font ' to return from shopping. The shaven headed lady from the womens cooperative sighs.  I can almost hear the word '' men '' being muttered under her breath.
Posted by Angus at 7:23 AM

Love the photo of squashing the plants.

Will Bob be addressing men in dark suits in the future? It looks like he's practicing his public speaking :-)

I wouldn't want to live downwind of a garlic processing plant, even on a protest free day!
Cheers, Gail.
PS I vote for white. Or do you want to create an ersatz Aberdeen impression?

A garlic growers demonstration. You don't come across one of those every day. Mindy and Max. xxxx

I like the idea of white beams (at least in a few rooms) and am working hard to convince Stuart of the same.

I attended a grooming course, especially for Merlin. I still struggle to get him to stay still for five minutes. I opted for the short back and sides for him before we left the UK. I am hoping that I have a months grace before battle commences!

In the third photo, Bob looks like he got into the old farmer's homemade wine.

Sometimes it's the smaller things that make a big impact.....I salute the farmers in demonstrating for fair prices and buying local products first.
Well groomed PON's , (even for 5 minutes) are as cute as can be, and your photos justify this.
"Men, Men, Men".....

I always buy local produce when I can because I do want to support the local growers, but I have to admit that I can be torn at times because their prices can be pretty steep--I saw local tomatoes the other day for $8.99 (€ 6.73) a pound--ouch!!! .


With or without hair in their face, Bob and Sophie have the most endearing expressions!

Kiriboy loves to be trimmed and looks so silky - but he likes to rugwash his face absolutely adores the carpets... so he is touseled in a minute again... so cute to live with a enthusiastic puppy!!! You have the double joy!!! Love from steaming hot Ischia Susanne, Daisy and Kiri

Well, at least you didn't make the wrong decision!

It has been mentioned before but I will say it again. Great doors.

I had never owned such a fluffy hairy dog before who needed so much grooming, so once when Kioko was very young I bathed him, blow dryed him and then sat him on the outside table and began trimming, thinking how hard could it be. It wasn't hard, and he didn't seem to care one iota but he ended up looking rather "chunky" and suffice to say not his best! Kioko now goes to the nice lady at the grooming shop just 10 minutes away. They clean his teeth, trim his nails, get him all cleaned and trimmed in "personal areas" (that I was afraid to weild the scissors near) and he glows white for at least a week. The groomer must apply some kind of dirt repellant because when we wash him he looks bright white for about a day. How did the dogs who owned me when I was growing up survive? There wasn't a professional groomer around (that was something reserved for the pooches of zsa zsa gabor and the likes) and I don't think my dogs ever had their teeth cleaned, I don't remember anyone ever getting wax out of their ears. They seemed just fine though.

If I may respond to Louise's childhood dogs.Dogs breakfast was dregs of three cereal bowls, a little egg yolk, and maybe a piece of left over toast all poured into his old pie tin. Lunch was part of a sandwich, maybe a little soup poured into his pie tin. Supper was the best: A dab of mashed potatoes. a piece of grisly meat, some green beans covered with a little gravy or pan drippings. They ate like this for years, lived to be 11 or 12, and rarely, if ever saw a vet. And grooming/bathing. Only if they got skunky or rolled in something that was just too terrible. Then the laws changed!