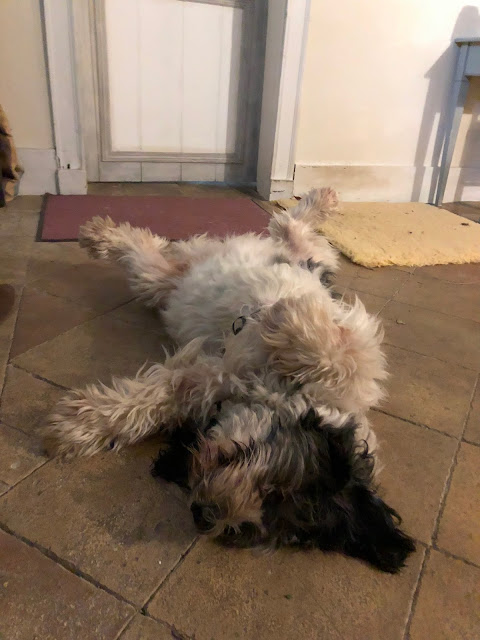 Angus talks to Manhattanites in dark suits. 6:00 am French time. Midnight in New York. Do they never sleep ?  What might happen between now and January ? What decisions do the East Asian allies make ? How will those Michigan and Wisconsin college towns vote now there's no students around  ? Could Don Jr be the chosen one for '24 ?  Will the stimulus package make it to the Senate floor before or after the election ? Sophie displays her interest in the conversation by turning on her back and snoring. Sophie does not snore quietly. 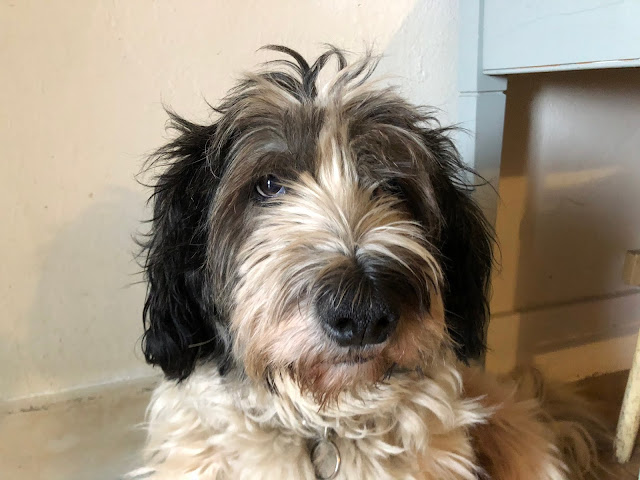 Weighty matters out of the way Angus and his furry companion head out for their morning tour du village. Some wild boar have been by during the wee hours and left their calling cards. Sophie devours these with relish. Sophie then has  a long drink from the zinc bath by the village pond.  On our way home we meet the Parisian lady who is here for the school holidays with her husband and 16 year old son. All the kids at the Henri IV wear masks but social distancing is a problem.  No sooner has the Parisian lady scurried away than one of the ladies from the womens cooperative pulls up alongside in her little silver Dacia. She asks whether there is anything they can do to help. ' Keep smiling. I know how difficult it can be at your age' she says . Until now Angus had never thought that he was at a 'difficult age'. 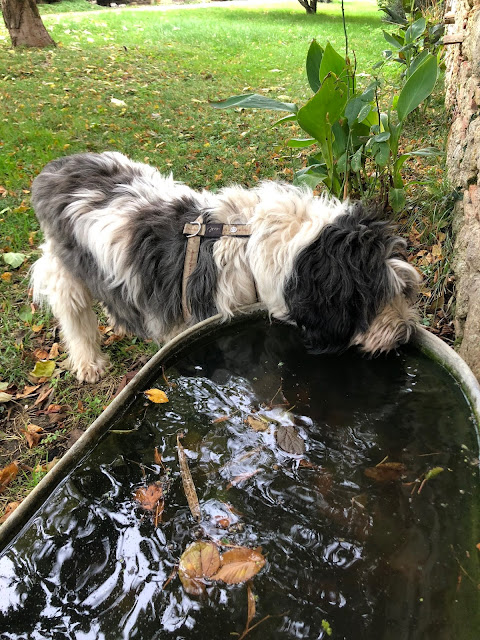 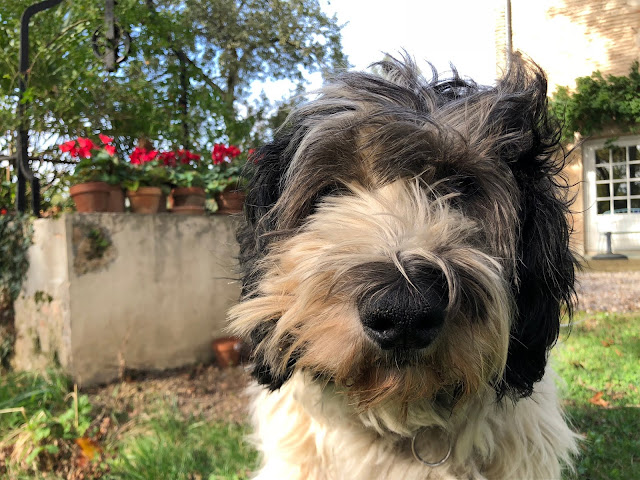 Blowy this morning . Loic comes to deal with the fallen leaves but the wind makes his task a Sisyphean one. No sooner has he got them in a pile than a gust undoes his handiwork and they go flying. For once the havoc can't be blamed on Sophie. 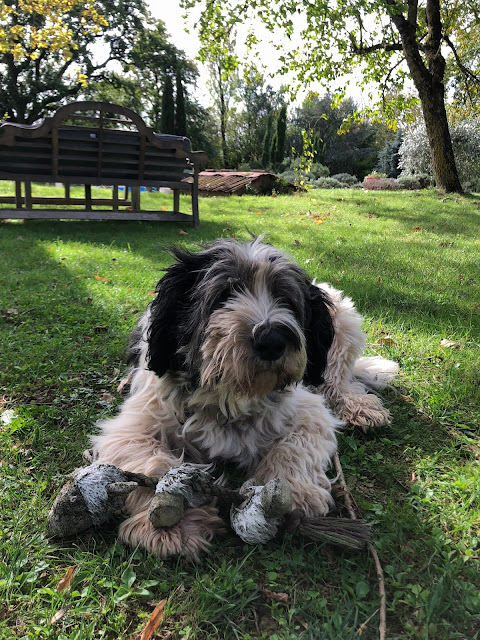 The family diva spends her morning following Loic around . She uncovers hidden treasures that her late brother had painstakingly hidden around the garden. That old family favourite, Lamb on a Rope , expertly buried alongside a rose bush, is rediscovered. So too is Green Toad. Sophie is delighted to be reunited with these old acquaintances. 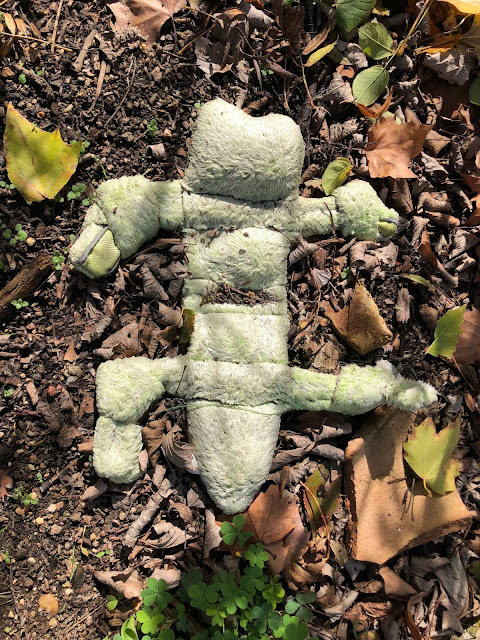 With much of the country in lockdown life has taken on a gentler pace. We are reading a lot. Angus finishes this book on the German revolution of 1918.  Although largely forgotten, the author ranks the events of November that year alongside the French, the American and the Russian revolutions as being one of the great political changes in history. Its success was obscured by development 15 years later. Not an easy book  but  well worth reading for its insights and the ' what might have beens'. 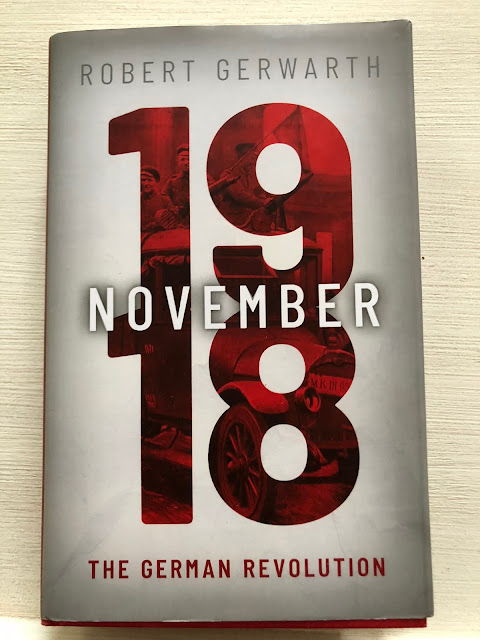 Today we spot two cars with Dutch plates, one British registered Mazda drophead, three Spanish vehicles and no less than five cars with Belgian plates. Many, if not all, the local rental homes are let out - at peak season prices to Parisians and other 'incomers' fleeing the lockdowns. Ireland has imposed a six week lockdown so I'd expect to see some Irish plates joining the mix.
Tuesday morning smile : https://twitter.com/AesTw/status/1317471458868776962
Posted by Angus at 6:46 AM 7 comments: 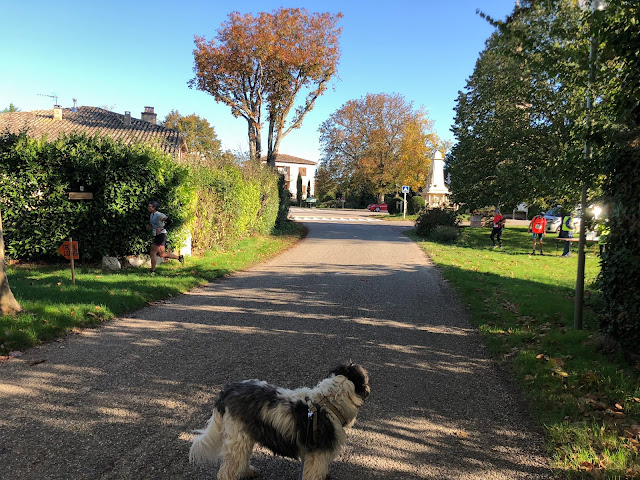 The day of the race. Two men in day glo yellow jackets arrive at the crossroads. They have red and green paddles to direct traffic. The village doesn't have much traffic at the best of times. On a Sunday morning it has none. The men in the day glo jackets look suitably bored. They greet Sophie with a degree of enthusiasm that indicates we're the only living things they've seen in the last fifteen minutes. 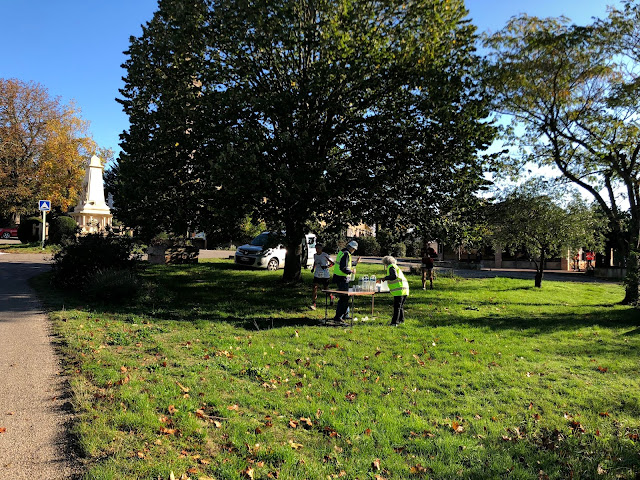 On the village green a man and woman of a certain age put out water bottles on a trestle table. The man is sent back to the car to get his beanie hat. ' It's chilly out of the sun and I don't want you catching a cold' says the woman. The man saunters off in sullen silence.  Shortly after the runners arrive. This seems to be quite a serious race. Flashes of shockingly coloured lycra hurtle through the village and down the ox track. There must be all of two hundred of them but they're evenly spaced out. Sophie stands intrigued and immovable until - in the space of ten or so minutes - the last has gone.
On a day in which there were 32,000 new cases holding the race still strikes Angus as being an odd thing to happen. Not a threat to the village or the villagers but there must have been a lot of 'mingling' in the car park and at the start line. 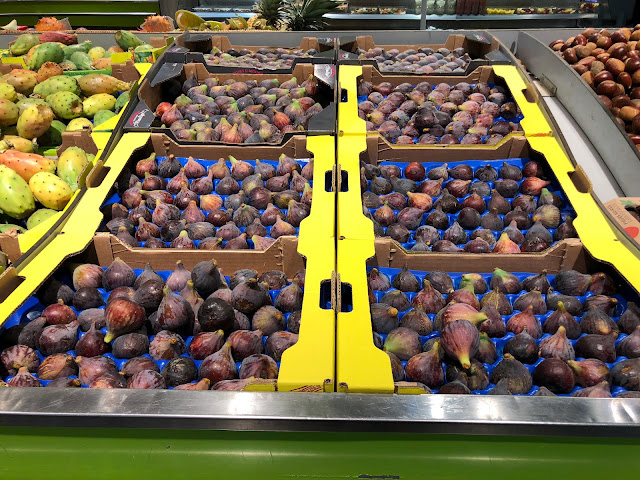 This morning Sophie and her master are the first customers at the greengrocers. Fresh figs ,,,,, 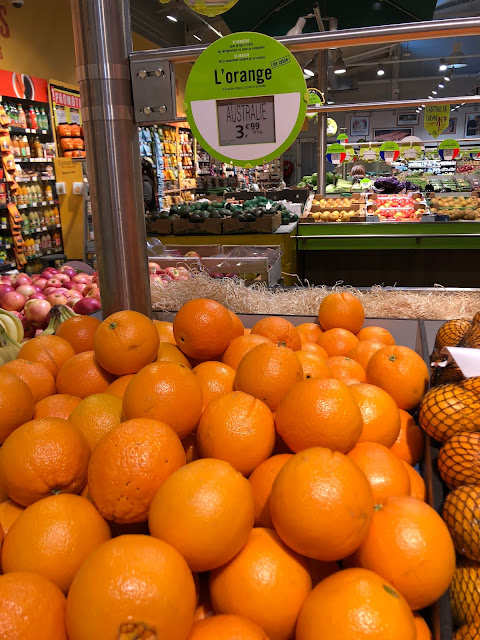 .... and Australian oranges make their debut on the counters. There must be some sort of northern hemisphere orange shortage as I don't think I've ever seen Australian oranges on sale before.
At the drive thru bakers they're out of croissants. Instead we get a pain au raisin. Sophie has the end of the spiral with the currants carefully picked out. She sits on the ground while Angus perches on the tailgate. No pandemic is going to halt this dog and masters Monday morning routine. 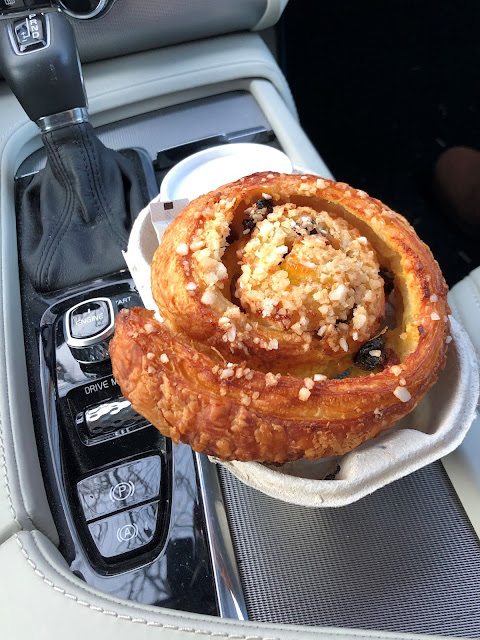 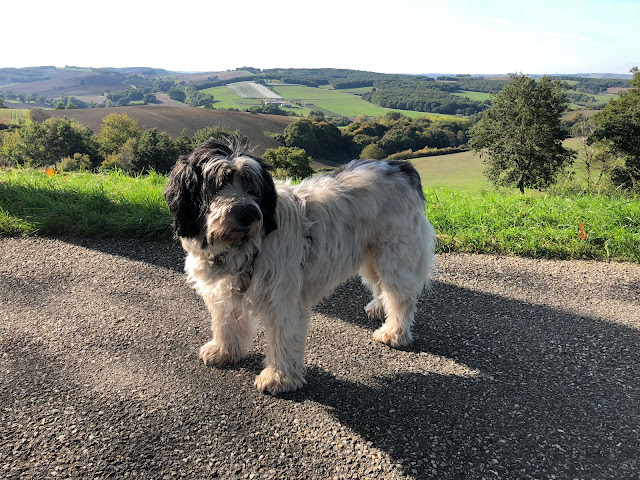 A 20 kilometre cross country run is due to come through the village this morning. It was originally scheduled to be held in a town close to Toulouse but due to the surge in infections and the imposition of a  nine 'til six curfew it's been rescheduled for our little corner of paradise. The new mayor is unsure how many runners there will be but thinks it will be in the ' high hundreds'. 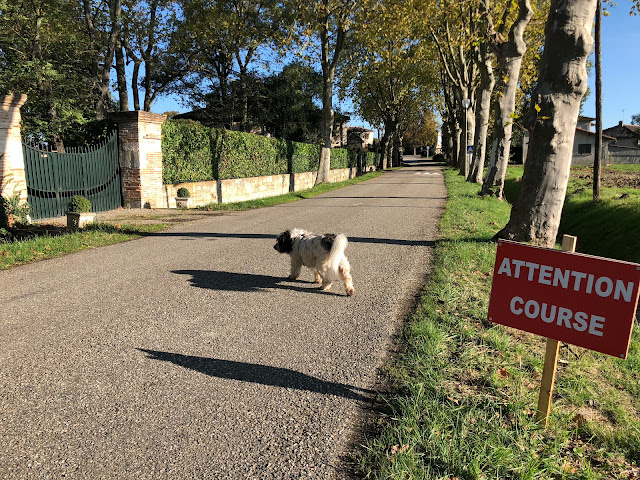 A group of serious men arrive at first light to hammer in signs and put up trestle tables. Quite why so many people should be gathering during the midst of a pandemic is something of a mystery. The course comes through the village and then takes a sharp right turn to take it along the ox track and down to the stream. After the heavy rain in the middle of last week the ox track is very wet and slippery. 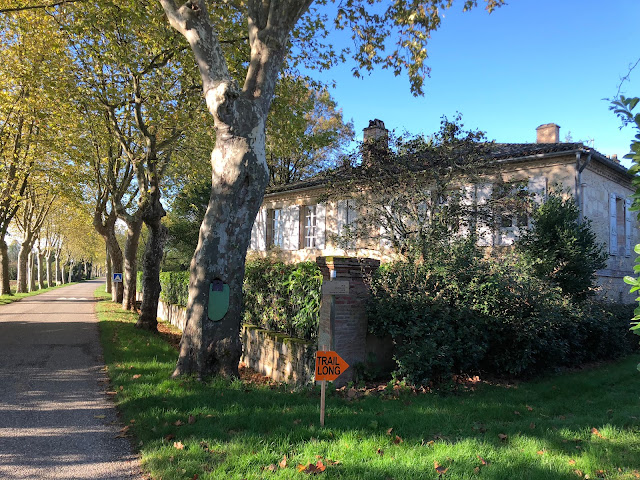 Sophie has sniffed all the signs, checked the trestle tables for Jaffa Cakes and is now looking forward to observing the passing runners from the distant safety of The Rickety Old Farmhouses garden.  Before the runners arrive she and her master will head off to the greengrocers and pop into the drive thru bakery for a croissant. 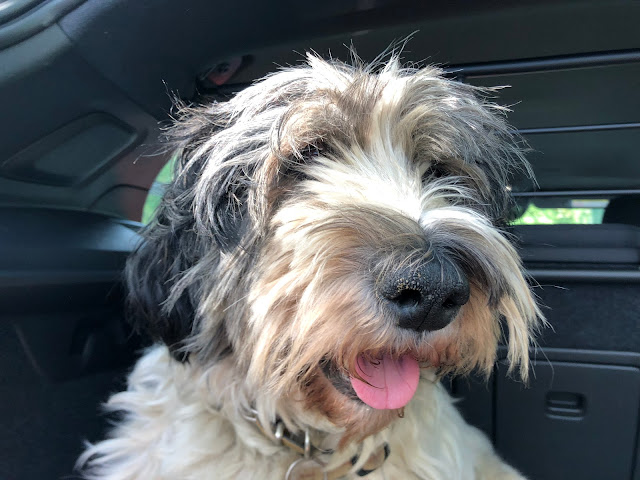 A new hotel opening. Let's hope this name doesn't turn out to be  right :  https://www.whiteelephantpalmbeach.com/ 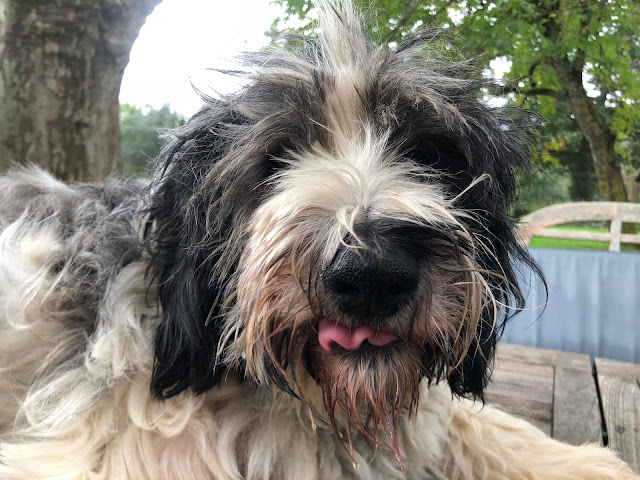 We return from our walk. Sophie looks as if she's been dragged through a hedge backwards. This is perhaps a little unfair. She's been through a hedge but not backwards. In fact she's been through a hedge several times this morning in hot pursuit of an audacious C-A-T.  It goes without saying that the C-A-T made good its escape.
So starts a Saturday morning in a quiet little village in deepest, deepest France profonde. Sophie's C-A-T chasing is likely to be the most exciting thing that happens in the village today. 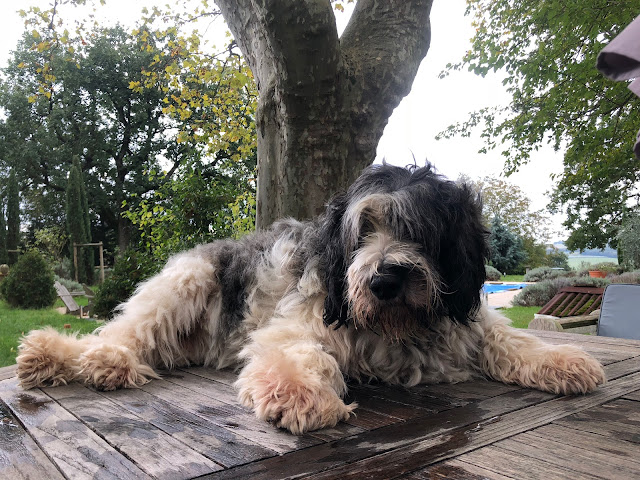 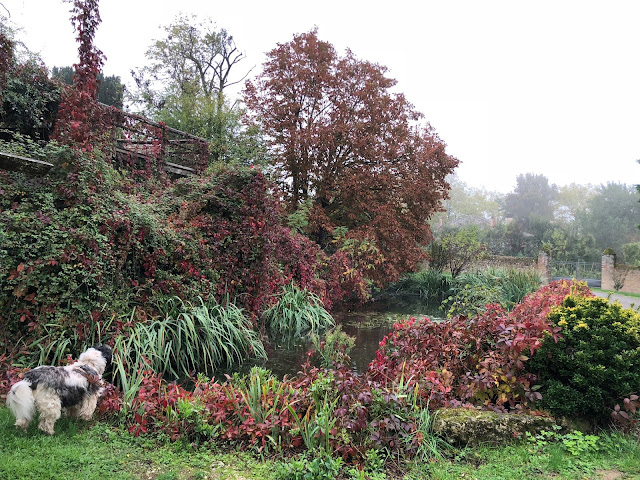 A dry start to the day after a week of heavy rain. The ground soft and springy underfoot. For one awful moment I think Sophie is about to leap into the village pond. Thankfully, she is content with merely glaring at the frogs. 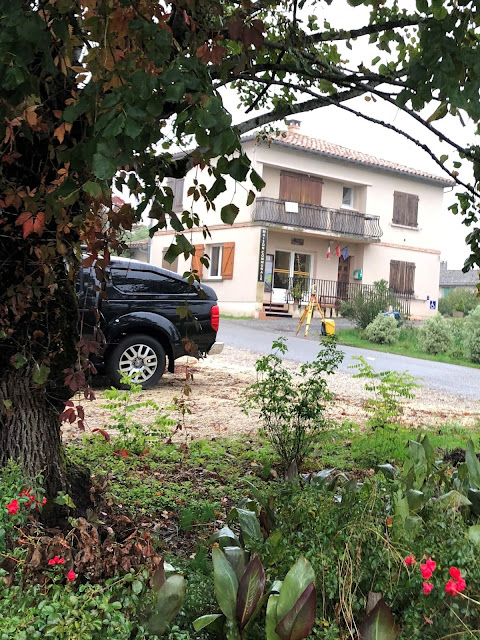 On our way home we spot two hooded figures. They are setting up a theodolite outside the town hall.  The man with anger management issues is claiming that the German billionaire has built a wall that has encroached a metre onto his land. The hooded figures have been sent by the court to verify his claim. The oft delayed court case between Anger Management Man and the billionaires builder is set for next week but with 30,000 cases of the virus reported in France yesterday and with Toulouse in virtual lockdown a further delay can be expected. From the shouting that drifts across the village late at night we can assume these delays are causing an additional degree of stress for our angry neighbour. 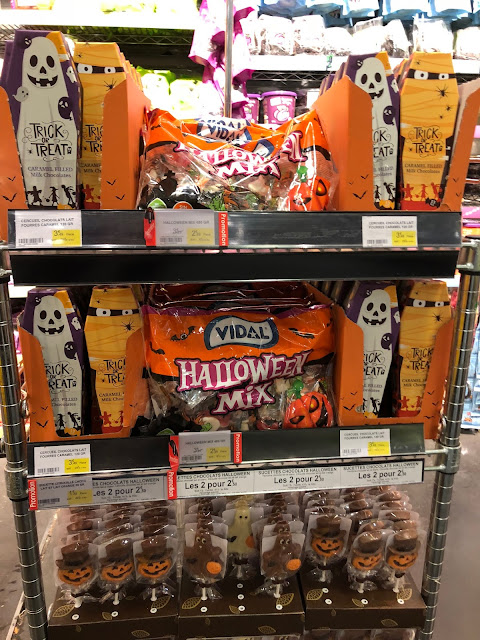 In the greengrocers Halloween treats and a display of seasonal gourds appear. There comes a point in the year when time just puts its head down and charges towards Christmas. 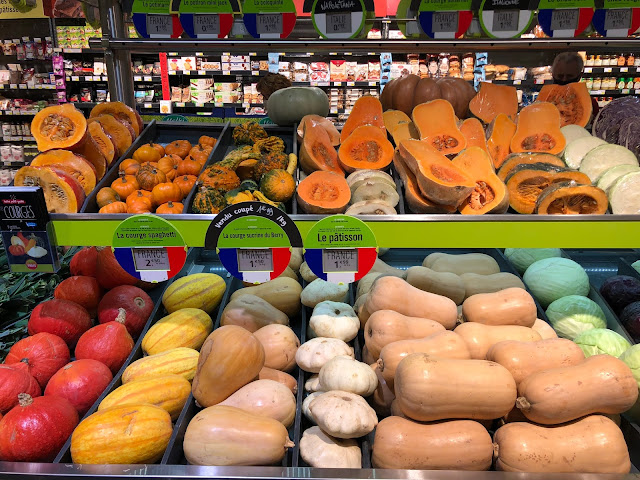 Angus discovers that there is such a thing as hazelnut flavoured yogurt. He inwardly shudders in horror. 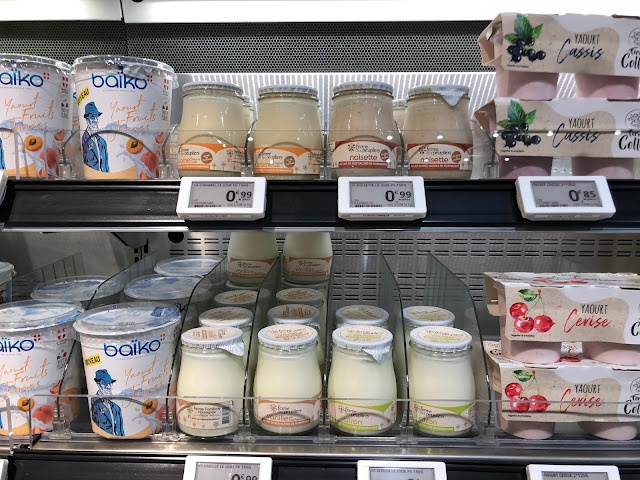 Brain plasticity - http://nautil.us/issue/91/the-amazing-brain/your-brain-makes-you-a-different-person-every-day
Posted by Angus at 6:38 AM 5 comments: 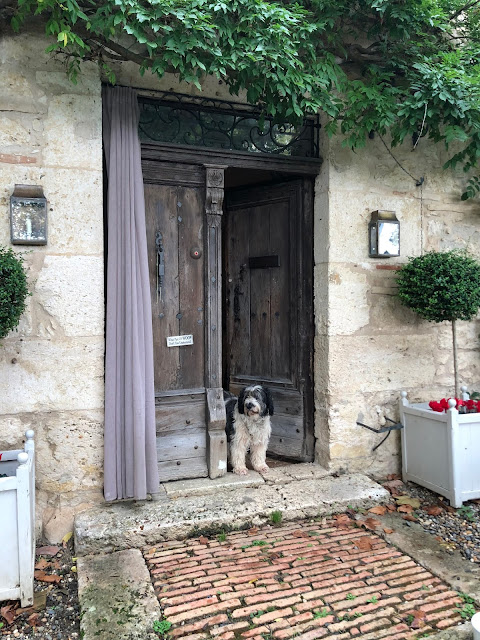 Our normal morning trip to the cafe routine has been upended by the lockdown. The President was on television last night saying that in the big cities like Paris and Toulouse there will be a 9pm until 6am curfew for the next four weeks. Bars and cafes closed. Everyone here seems mildly surprised at the speed with which the virus has returned. It's almost as if they thought it had gone, never to return. The one big change is that people in the village now stand well apart when talking to each other. We foreigners tend to position ourselves at least eight feet away when talking. The locals a more intimate four feet or so. The days of kissing on the cheek are gone.
Instead of curly croissant ends Sophie is getting a lot of walks. Today she heads off for a long stroll on the far side of the village.  Usually we see few, if any cars, but this morning  three with Dutch registration plates pass through the village. Europes new population movements. 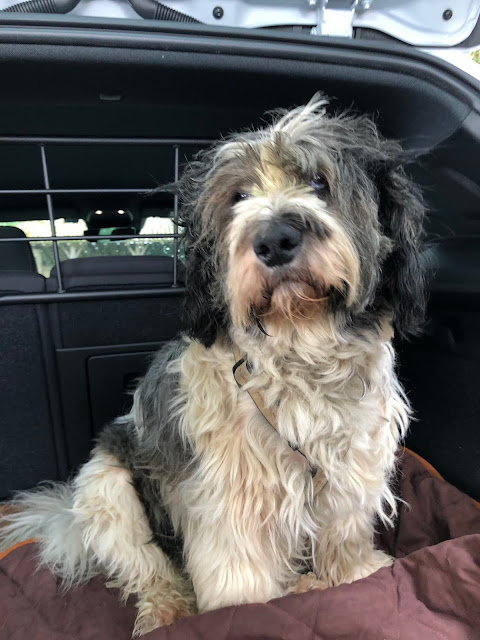 My shaggy companion rather enjoys these trips in the car. Attention and excitement. What more could a girl ask for - apart from that elusive start of day viennoiserie? 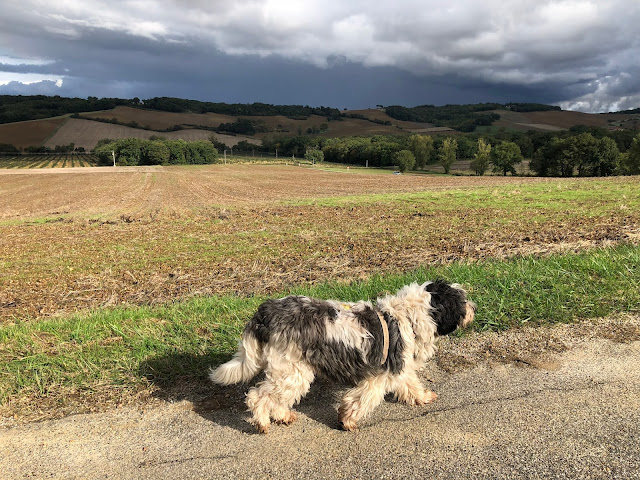 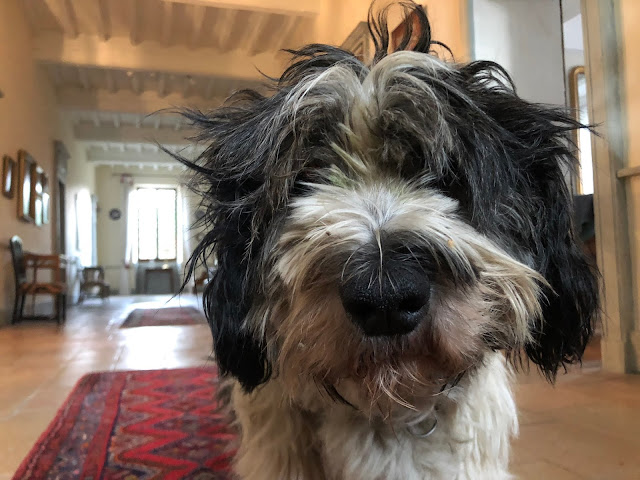 A shortage of fridges ? : https://www.cnbc.com/2020/10/10/coronavirus-why-there-is-a-national-shortage-of-refrigerators.html
Posted by Angus at 6:54 AM 4 comments: