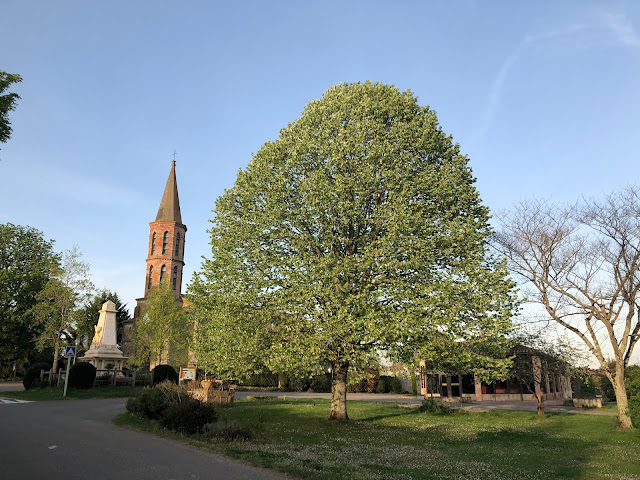 Venus glittering like a diamond as we set off on out start of day tour of the village. This morning she's joined by a thin crescent moon. The two of them hanging gracefully, side by side, just above the horizon.
Sophie's walk is undertaken amid decidedly chilly temperatures. A blast of frigid air has swept down from the arctic taking us all by surprise. There has been snow up north. Sophie loves the cold spell. PONette weather. Oblivious to the icy gusts she stands and stares, for what seems an eternity, at something only she can see in the long grass by the village pond. There is a smell of wood fire in the air. The villagers are all up and about early lighting their stoves. 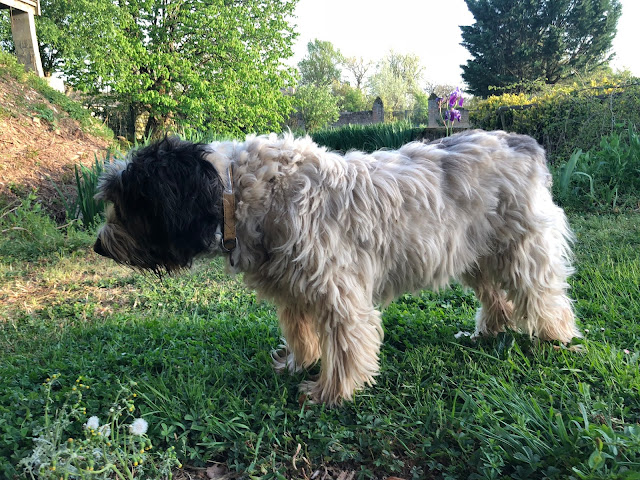 We say good morning to the man with anger management issues who is out collecting his breakfast eggs from the hen coop.  He is due to have his first shot at the end of the month. ' They've started to make the vaccine in France' he adds as if a locally produced vaccine will somehow make everything right as rain. By the pond the builders teenage son greets us with a half hearted grunt of recognition- he's been told to get up and bring in logs from the wood pile. He drags a trolley along behind him in that ennui infused manner of all  sixteen year olds spending Easter with their parents . Seems the online  school system has been hacked so his Easter holiday homework schedule remains satisfyingly inaccessible. 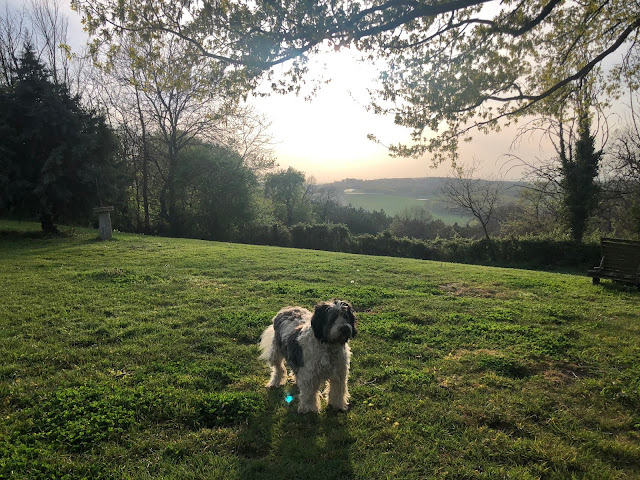 The new mayor stops his white van , winds down the window and greets Sophie. He's in no hurry to move. I ask him how he likes his new job. ' A lot of responsibility but I cope '.  He then goes on to add ' The good thing is I've got broad shoulders and I don't lose any sleep over it'. This is a strange comment from a man who opens up the town hall at three in the morning to do his paperwork. 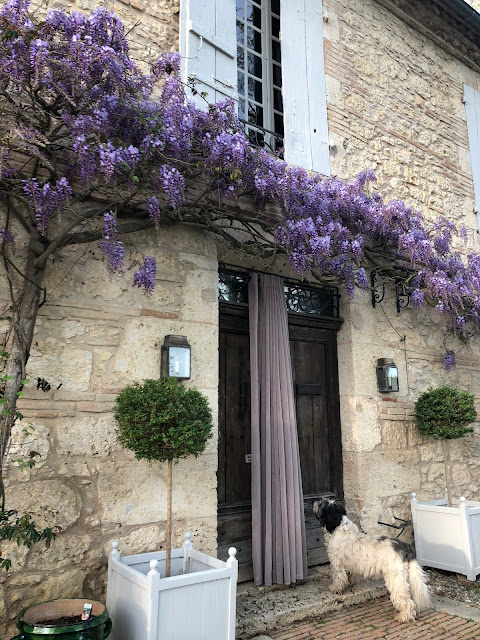 Flights from the US to the UK are set to begin again next month . Going here this September might move from being a dream to a manageable reality ? :https://www.unionsquarecafe.com/
Or this ? 'The Fonts' favourite and a deeply intelligent wine list :https://www.aquavit.org/
Posted by Angus at 7:32 AM

Oh, the wisteria!!! We have a little potted tree on our patio, but it is stubbornly refusing to bud or bloom. We used to have a branch of Aquavit in Tokyo, and it was both very good and very beautiful, but it seems to be no longer with us.

Would have thought Aquavit was ideal for Japanese tastes ? There again why I should think Japanese should share Swedes love of pickled fish is a mystery.

Every time I see a photo of your beautiful Wisteria, (or the one on my neighbour's wall) I remind myself that I really must have one in my garden. Newly planted, they take time to establish, and it's seven years before they flower for the first time, so I shall have to be patient!
Like Sophie, Inca stands and stares for ages at something only she can see. There is no hurrying her on when she's in a trance.

Also admiring the wisteria. I wanted to plant one at our house but was told that if not carefully kept in check, it could rip off shutters and even a roof.
Aquavit is a .org?
Odd to have had the windows open and now see smoke coming from the neighbor's chimney.

I guess the online school system being hacked is the pandemic equivalent of being sent home early because of snow!

We had one when we lived in Chelsea ( in London ) and it did untold damage to the foundations and the Georgian brickwork. Here The Rickety Old Farmhouse is so rickety that a little wisteria damage goes unnoticed.

They grow wild here - presumably because they long ago escaped from someones cottage garden. The thing to watch out for are the roots which spread to all sorts of unexpected places.

If the flights are indeed going, I'll pass you in the sky!