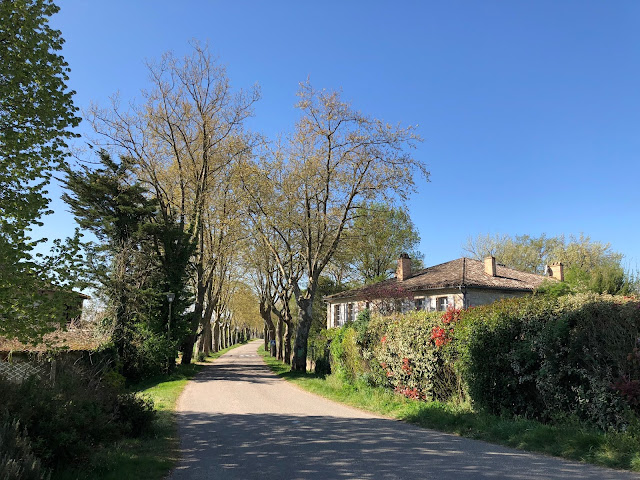 Easter Monday. A nationwide lockdown now in place. On our morning walk a blue gendarmes van passes us but doesn't stop.  The only traffic we see in forty five minutes.  A reminder to print out the permits that allow us to be within 6 miles of our front door. 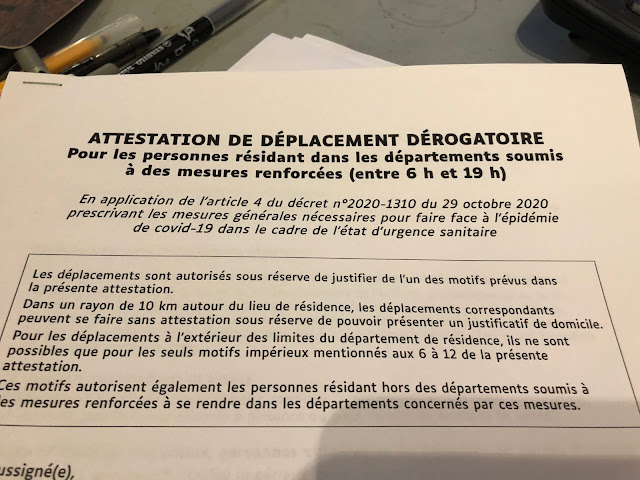 A start of day chat with men in dark suits. Ukraine this mornings top concern. We're at that stage in a new Presidency when the worlds mischief makers see how much leeway they have. The Manhattanites also show great interest in the vaccine roll out. The US dollar has been strong on the back of 4 million doses a day in the US. By contrast the Euro has been weak as it becomes apparent that things won't be back to normal in time for the start of the all important summer holiday period in Spain.  While I chat Sophie positions herself outside the front door to deal with any C-A-T-S that might dare to wander by. 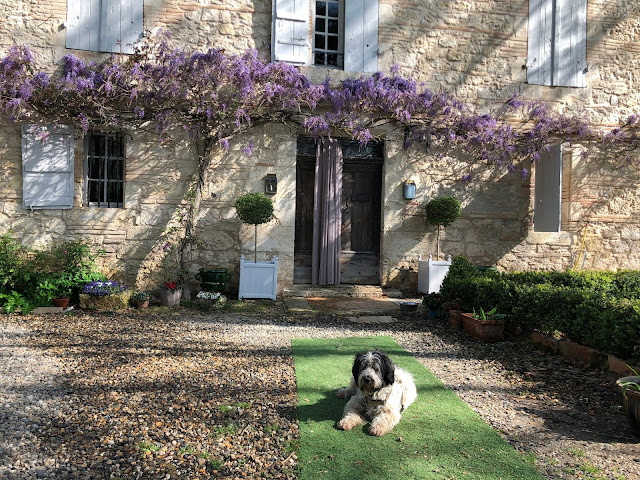 Yesterdays vaccination process went smoothly. We showed up five minutes ahead of time and were told to fill out a one page medical history form ( rather simpler than the 8 pager the Germans require ). Neither of us has a pen. The receptionist lends us one but only after she tuts loudly and informs us that ' in France people usually bring their own pens'. After that  were ushered into a very white and very modern waiting room with an enormously high ceiling. Everyone was masked up although one lady seemed to think it was only her mouth that needed to be covered.  'The Font' was in and out in three minutes. Angus took seventeen minutes, but only because the doctor wanted to have a long chat about whether I thought the Greens rather than the CDU could win the German elections. Interestingly, the doctor sat behind a desk and chatted while the bad tempered receptionist administered the injection. The doctor and a colleague ( and the receptionist ) are scheduled to do 160 vaccinations a day , every day, for the next month. Two doctors at the surgery will be vaccinating full time, while the remaining two will carry on dealing with 'general' problems. The whole process will start again for second jabs in May. The doctor says that he hasn't had one local refuse to be vaccinated. 'It's free' he says by way of explanation. The doctor and receptionist are thanked for working during their Easter Sunday lunch hour.
After that we sat outside in the car park for a quarter of an hour to make sure there were no side effects. This morning 'The Font' has a sore shoulder. Angus is as right as rain. Both of us are simply delighted to have started the path back to normality. In fact that's not true. We're not simply delighted to have been vaccinated , we're DELIGHTED !!! to have had the jab. 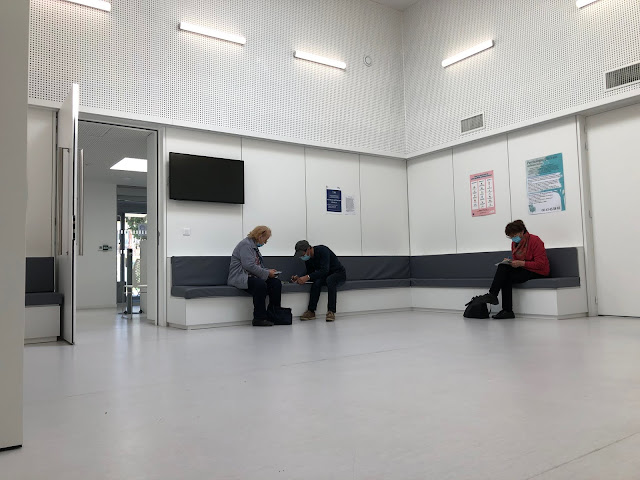 Congratulations! Everybody who gets the shot seems to have this same unexpectedly DELIGHTED !!! reaction - at least everybody in my age group.

Delighted here that all went well yesterday and side effects are apparently minimal.
Wondering how Angus rates the Greens chances in Germany?
Sophie might enjoy the Aberdeen weather this morning - an Arctic blast bringing snow showers and a face-numbing wind chill...

Glad to hear it! Hope to join you among the vaccinated soon.
Was filling up with gas on Saturday and every single car at the pumps and in line were from other departments, none of them neighboring. Was the only local. Incredible.

Congratulations! Know the feeling Angus - everyone I know was absolutely DELIGHTED to get their jab too. It's the relief of knowing that you're on the way to having as much protection as you can. I too, had a sore shoulder the next day, but the nurse had prescribed paracetamol for any unexpected symptoms, which did the trick.
Surprised to learn that the Spanish holiday season makes so much difference to the strength of the Euro throughout the Union, rather than just in the country itself. But I suppose the loss of millions of visitors a year, in holiday spending mood, will make an huge impact. I do know that Brits will be a great loss - they spend more than any other country. We're seeing Spaniards from lockdown parts of Spain creeping in, and now fear our previously low virus numbers will surge. For some reason they seem to think that once they have "escaped" from their part of the country they don't need to wear masks or obey any of the other restrictions in place.

Excellent news! The slightly sore shoulder I had post jab was infinitely better in comparison to the horrible effects I had when experiencing this dreadful virus. Please everyone - get jabbed when it's offered to you.

Angus, just out of curiosity, did y'all get the AstroZeneca vaccine? Almost everyone I know received Moderna (some, including me, felt lousy for 24-36 hours after the second dose, and I got a rash at the injection site 8 days after the first dose), but my daughter and SIL, who are in their 30's, are getting the Pfizer... Like you, I feel free as a bird now, but also slightly anxious about resuming normal (sometimes, too hectic) life. In many ways, it was restful, and a nice excuse not to do a lot of things I would just rather not do :(

Congratulations on your Easter Sunday jabs and minimal to no side effects! We joined two other couples for a special Easter dinner at another's home about 20 miles away yesterday. All of us long time friends, same age group and now, thankfully, fully vaccinated. It's difficult to describe how very 'strange' it felt to gather once again and share a meal with friends, but delighted!! pretty much sums it up. And now it's Monday and back to the necessary reality of careful behaviors, masking, and hand washing. But with a sincere hope and prayer for us ALL that, someday soon, this will be well past us. What wonderful thing that will be.

I am very happy for you and ‘The Font’ to have received your vaccinations! What a wonderful gift for your Easter Sunday. Sophie is taking her job seriously, as I did not see one c-a-t in the photo. Your wisteria is glorious!

Glad the vaccinations went well. Hope there are no ill effects from it.

Got my first injection of the AZ vaccine 3 weeks ago. No notable side-effects, short of a sore arm the day after. Here,(CA) it is currently being given to people 60+

...Sorry, the previous post was meant as an answer to Liparifarm.

Happy to hear of your first step on the road back to the old normal. (The new normal sucks)
Any visibility on the second shot yet?

Hurray! I had a sore arm with the 1st jab, sore arm and some fever with the 2nd. Nothing to complain about. My husband (at age 82) had no side effects! What a great feeling, isn't it? So lovely to see your wisteria once again. Spring has truly arrived now. Still crossing our fingers for the first flowers on our wisteria this year; tiny leaves just starting to uncurl so far. Still chilly on the coast of Northern California even in the sun.

The feeling of euphoria after our jabs was slightly dampened by the knowledge that nothing much else had changed, we were still locked down. That was quickly followed by a sense of calm that had been absent for a year. It's a good feeling.