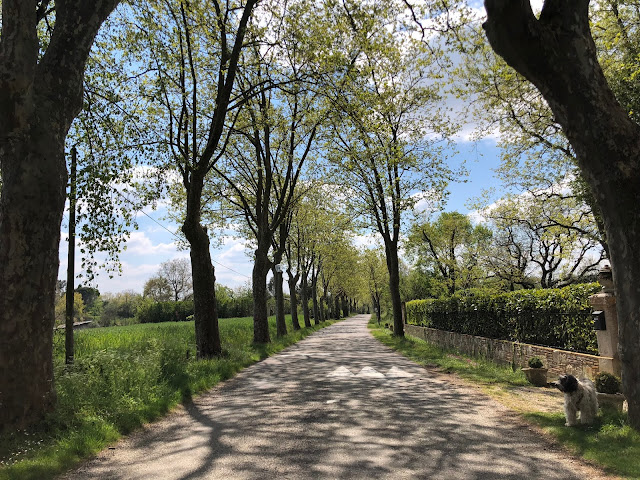 Out of the gate and along the lane. Sophie chases after three C-A-T-S spotted at various stages on our walk. The Old Mayor is up early. He and an  octogenarian mate are cutting back the shrubs around the car park. Both are villagers born and bred. The Old Mayor tells me that under the new town hall, built by his father, are cellars of an old medieval  building. It may have been the chapel for the chateau before the Wars of Religion. After the exceptionally long rains earlier in the year he thinks the cellars may be filling with water. This may be part of the reason water has started to build up in strange places and flow into the village hall kitchen. 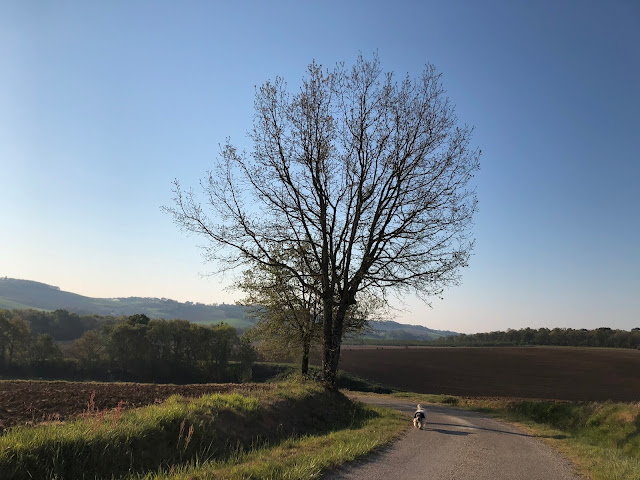 A bit chilly this morning. Sophie hunts in drainage ditches for fox or boar delights. We talk about world affairs. India and China are arguing over how a new Dalai Lama should be chosen. Beijing says the next Dalai Lama should be chosen by picking lots from the golden urn in the Jokhang Temple in Lhasa. India prefers the “dough-ball method which  entails writing the names on a piece of paper, encasing them in dough balls, placing these in a bowl before a sacred object for three weeks, and then publicly rolling them around in the bowl until one falls out. Behind such esoteric choices lies control of Tibet. 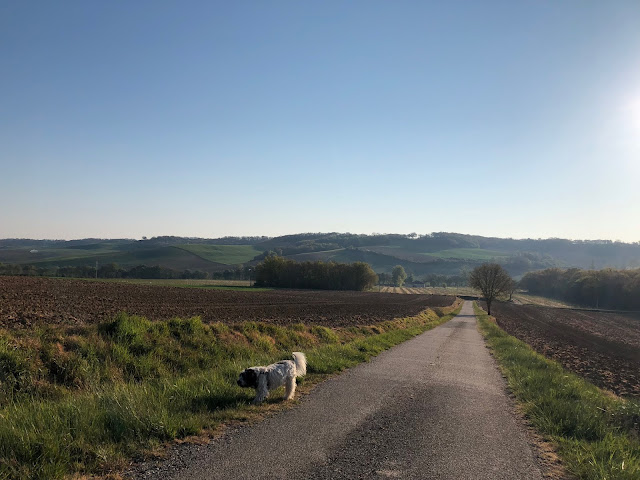 Some virtuoso bagpipe playing at yesterdays funeral of Prince Philip. Playing the pipes indoors without overpowering the listeners is a rare skill.  Overall, a difficult event handled with grace, understatement and exemplary good taste :https://youtu.be/Iql2WrAtaCo?t=4641

And on a separate note - the last woman in the world who knows how to do this - sea silk from clam secretions – a rarefied skill, literally hanging on by a thread on the Sardinian island of Sant’Antioco : https://www.chiaravigo.it/index.html

Hari Om
Yes, the pipes rather sealed the deal... poignant and dignified. Wow to the sea silk. YAM xx

Much to his regret, Bertie has never tasted 'boar delights' but would love to give them a try some time...

What a beautiful morning for discussing world affairs - the clear blue sky and promise of a good day must make things so much more digestible, if not acceptable.
Interesting information about sea silk - but apart from it's rarity, I wonder what, if anything, it might be made into, or perhaps it doesn't have a purpose, and just is.
No idea what Inca finds so tasty in the verges hereabouts but I don't think it's boar delights. We've only seen the very occasional fox, and are probably not up early enough for her to get first pickings!

I had no idea picking a Dalai Lama was so mundane. I thought there had to be a particular alignment of stars over a household, or a child born with a particular birthmark.

Unfortunately, the BBC removed the bagpipe video for copyright reasons. I will keep looking. The old mayor is very wise. I hope he is extensively interviewed as you compile your History of the Village!