Weeds are flowers, too, once you get to know them. 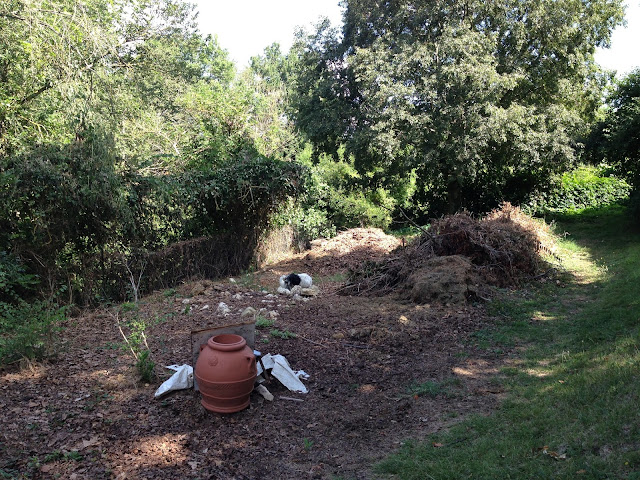 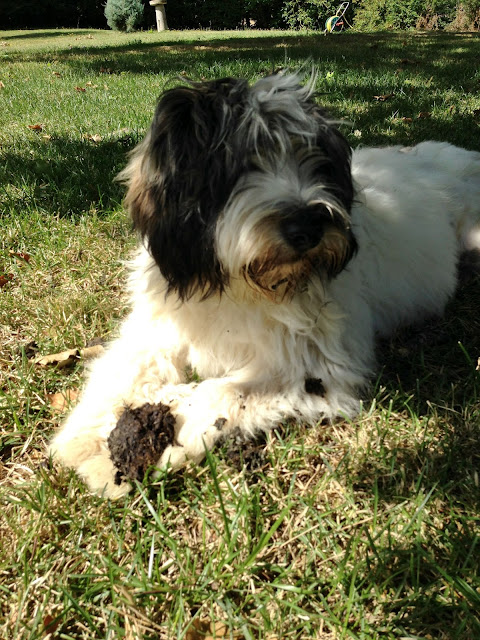 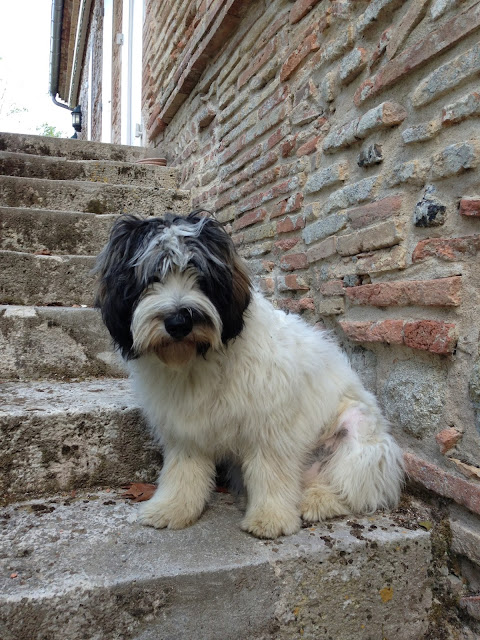 The compost heap. A wilderness  behind the barn where Loic the gardener deposits the grass cuttings and watches them slowly turn into mulch. Bob and Sophie's idea of heaven. Their most favoured place.

To the garden centre for some wire netting. Now the builders are gone  ' the font ' thinks it might be a good time to plug the gaps in the compost heap fence . This, it is hoped, will stop our happy PON's from wandering into the freshly decorated  house with mouthfuls of silage .

This morning Sophie can be found inside the compost heap fence howling to be let out. How did she get in ? Did she tunnel under or leap over ?

Email ThisBlogThis!Share to TwitterShare to FacebookShare to Pinterest
Labels: A A Milne., Bob and Sophie, Polish Lowland Sheepdogs

our Sally loved silage - in the park, those clumps of cut grass left by the mowers, just turning solid and sour ;)

Halfway through this post, the outcome of the fencing project was entirely predictable!

Did you tell Sophie that it was "An impenetrable , six foot , PON proof, barrier?"
I wonder how she DID get in....please keep us posted.
You can hide nearby and watch to see how she magically gets back inside again......or employ the use of cameras.
Who knows? You may have a YOUTUBE viral video after we catch her on film.

Levitation?
Standard poodles are good at vertical take-offs but six feet would be a challenge. Maybe she was inside, disguised as a pile of silage all the time it was being built!

Do tell, how did Miss Sophie get in? What a little scoundrel.I hate to say it, but I'm sitting here LAUGHING OUT LOUD at the image.
Karen & Kelly Rathje

Me too. Not howling, but certainly smiling at the ingenuity of our doggers. Or should I say diggers?

I agree with Bertie. We could have saved you a lot of money!

oh oh oh!
i agree with virginia c!
as a matter of fact I've been missing your little videos. they're ... they were ... priceless!

I've learned to never say an area that is fenced off is inaccessible to our pup. There really is no such thing. We refer to the pup's very strong quadriceps muscles as her "leapinators" and call her a kangapoodle.

You see, what you thought of as PON proofing Sophie saw as a great new game and the howling was to let you know she'd won the game ! Go Sophie !

Given her penchant for digging, I would say that's the best bet.
By the way, how many times a week do you have to bathe those angels?

Well, we all know she is a genius who has been known to use her brother as trampoline in the past and said brother is considerably larger than he used to be = more bouncy. Just saying.

I can just imagine the conversation. “Oh Bob, you look a little tired, why don’t you take a delightful nap right here in this shady area by the nice new fence. I’ll curl up with you. Hmm, this patch of grass feels a bit damp doesn't it, shuffle back a bit, a bit more, two more feet say. Perfect. Don’t be alarmed, I’m just going to bounce on you a couple of times . . . wheeeee . . .”

Kangapoodle! HA. I have a kangabeagle - Michael-Angelo can levitate four feet straight up; can't leave him loose alone in the house without me there or even sometimes with me there!

Dear Sophie - you are ingenious but you do need to get yourself back out...oh, I see, that's what Angus is for....:)

Can I mention cats on a dog page? I once had a cat and a wire cat cage that when she was in it, I fully secured with twist ties at brief intervals all around because otherwise she would try to escape and I thought she might hurt herself doing her Houdini. One day, after I had brought the car around to load her, already in the cage, into the car for a trip to the vet, I found her sitting on the couch smiling. The cage was fully twist tied shut, sitting next to the couch on the floor. No one else in the house. It was the smile I found most galling.
Barbara from Vancouver