A day of high drama. 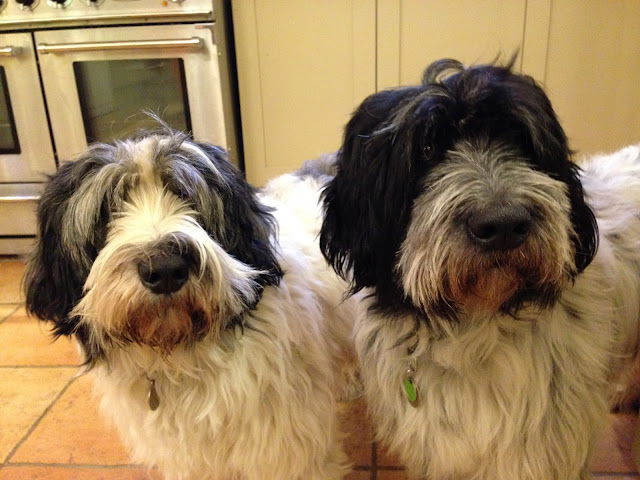 Sophie has taken to sleeping on her back. This might explain this mornings 'flat head' look. 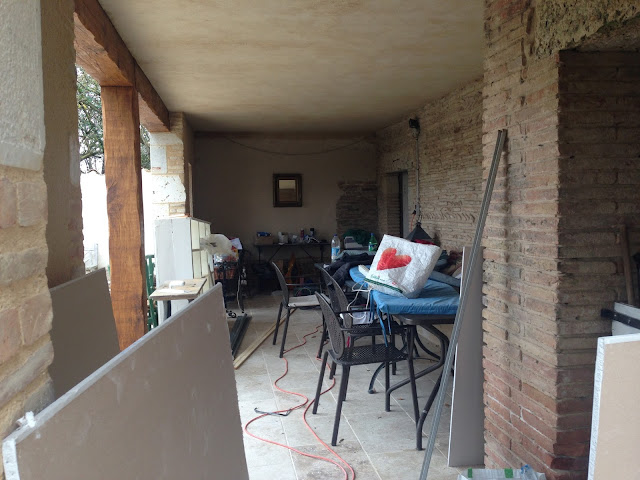 The workmen are busy putting up walls. Two of the morose lads leave their sandwiches in a bag on a table on the terrace. This proves to be a mistake. The 'disappearance' of the sandwiches goes unnoticed until lunch time. 'The Font' makes replacement cheese and ham baguettes. Sophie gives us her 'I cannot tell a lie. It was my brother ' look. The crumbs on her chin tell a different story. 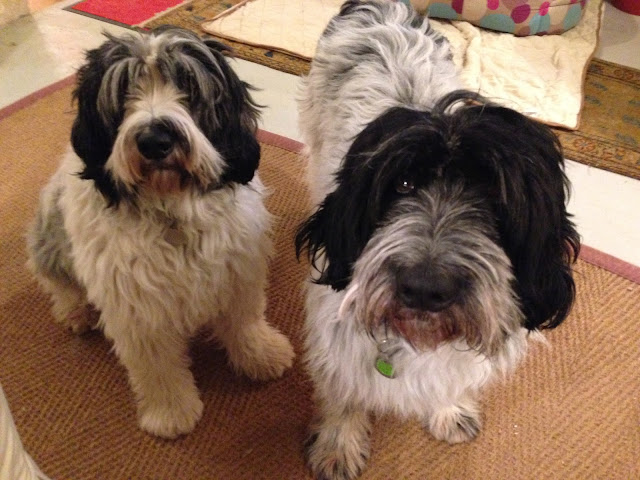 There is wholewheat spaghetti for dinner. Sophie's new anti-gulp bowl slows her down - infinitesimally. Bob, being a gourmand, slowly eats his spaghetti, strand by strand. This display of prudence drives his sister insane.

While we've been away The Old Farmer has added a string of red and pink flashing lights to the windows and doors around his terrace . This is a colour combination one doesn't often see. Together with all the other lights around the gutters and along the railings his little cottage now displays  a festive glow not unlike a nuclear reactor in meltdown.

So passes another day of high chicness in deepest, deepest France profonde.

Just a normal day at the ROF, then !
We can only assume that the Old Farmer embraces Christmas with a rare enthusiasm, and is even now contemplating a 10 metre high tree with yet another assortment of multi-coloured flashing lights - each set on a different setting of course. Is it right that we hear warnings are now in place to pilots approaching Toulouse airport....?

In our Middle-England garden last night, there was a certain reddish hue in the south eastern sky....

Merlin is jealous and currently packing his bags. Our newly gluten free home is now devoid of such PON favourites as spaghetti.
x

I am sure that the replacement ham and cheese baguettes that the Font made were waaayyyy better than the sandwiches that the morose lads brought with them.
Brownie is hoping for some wholewheat spaghetti and sauce when he gets back from the vet today.
The Old Farmer is a hoot....I just love his spirit of life.

Could there be a method to the morose lads' leaving their lunch vulnerable to the discovery by the PONS,
knowing (hoping) that it will be replaced by something waaayyy better, as Virginia says? We all recall the
first time and the quiche luncheon.

We tried a Kong toy filled with kibble to slow down our Lily's hoovering of her meals. But she had it all
figured out in no time. Then she sat in front of her dish waiting for her "real meal."

It is unlikely that the morose lads could plan anything. A carrier bag and layer of grease proof paper is no defence against the perma-hungry angelic duo.

Poor workmen. First they have their lunch stolen then the morose lads have to eat their lunch under the reproachful eyes of the PONs.

Drag it out so that your sister wonders why she hasn't got any spaghetti left and you still do. Make lip smacking sounds to amplify her agony.

If three wise kings show up it was the Christmas star. If not.....

Perhaps he sees a fresh line of lights to add to his collection each time he goes to the supermarket ? Seasonal impulse shopping.

No dogs for a couple years now, but my Tiger and Earthakitty fill the void now. They both eat 1 kibble at a time (very fast) as if there're keeping track no gets an extra. Made me laugh out load thinking of Bob's slow slurping and enjoyment 1 noodle at a time. Poor Sophie, she should know by now! Your house looks beautiful at Christmas, all the time really with all your seasonal decorations

I am awaiting the news bulletin that says a strange red and pink glow in southwest France has been spotted by the international space station.

When purloining sandwiches, ones needs to eat quickly...

Sounds like the Pons had full tummies all day.