Courage is being scared to death, but saddling up anyway. 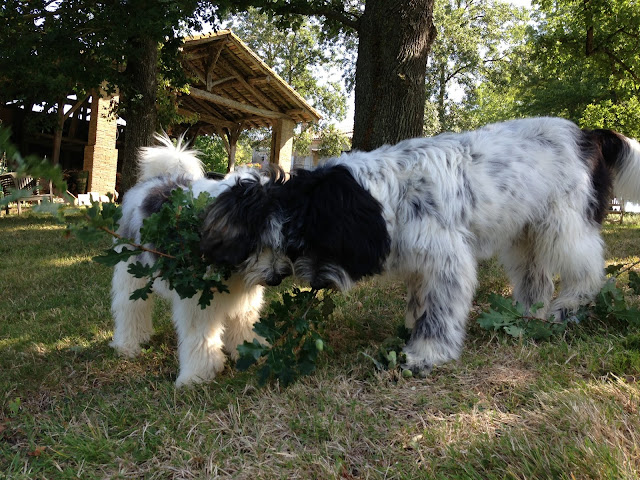 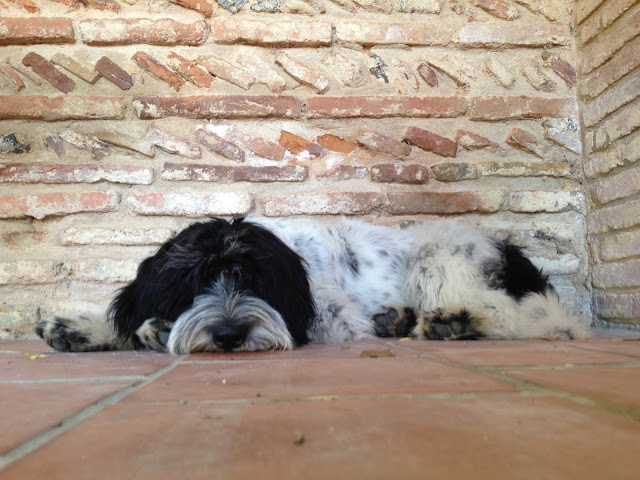 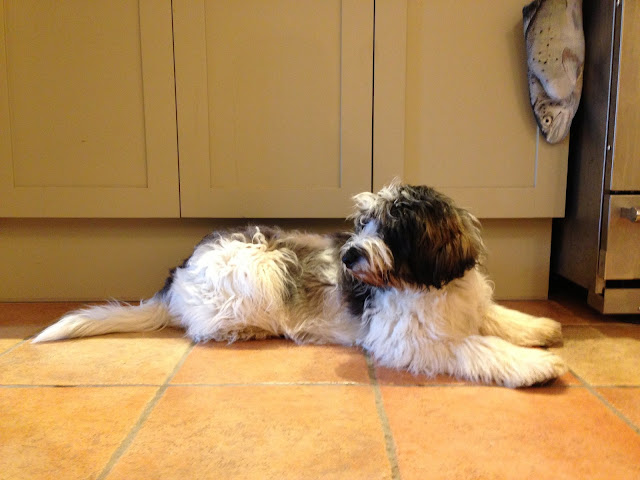 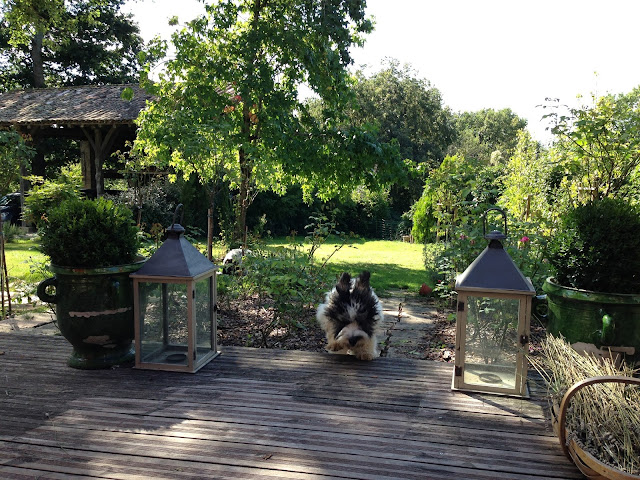 2.50 am. The malodorous hedgehog wanders across the lane and arrives in the garden. The PON pups start howling and rattling their pen. ''  Right ! That does it " says ' the font '  before adding " I'm not losing another nights sleep ".

Angus is sent off to find thick gardening gloves , a flashlight and a cardboard box .Bob and Sophie are sent out into the stygian darkness to find the visitor. Finally, amid whoops of delight and cartwheels of canine joy , the hedgehog is  located and carefully put in the cardboard box. The thick gardening gloves proving their worth.  ' The font '  gets the little Skoda out of the barn and drives the tightly curled up scavenger off down the hill. There, in the wildflower meadow by the walnut grove, he is released. By 3.20 silence has returned to our little patch of paradise.

This morning Bob and Sophie race round the garden looking for the intruder. They then chew on a fallen branch from the oak tree before settling down for a lengthy nap. Bob on the terrace, Sophie in the kitchen.Time to dream about saving their family from prickly intruders.

' The font ' wonders how long it will take the hedgehog to find his way back up the hill. Angus wonders what the villagers must be thinking about the bizarre nocturnal behaviour of the foreigners in the rickety old farmhouse.

Your post reminded me over twenty years ago I caught a possum in the garage (found by my cat) and then drove it, in the middle of the night, about 10 km away to release it far enough away so it didn't come back.

I hope that you and "the font" now enjoy many nights of uninterrupted sleep.

Glad to know we're not the only ones who transplant wildlife !

We were thinking it might have beat 'the font' home. SHE takes wildlife....even mice....out to another area.

Love the last photo of a flying PON.

Thank goodness the hedgehog saga is over.....let's hope it doesn't find its way back to the ROF.
I've transplanted a few creatures in my time, especially frogs, since the cane toads here are toxic to my bow wows....well my guy friends did the transplanting, I couldn't get near those toads for a million dollars.
I see Sophie has caught an enormous fish!!!!! What's for dinner? Fish à la meunière?

I think that compared to other things that have happened in your village, this could be seen as quite normal! But it must be the season for hedgehogs; another blog that I sometimes read in Périgord France also had one in their garden that they relocated--They are interesting creatures.

Aahhh.. Hedgehog Heaven. Could Spike be after our fluffy friends' doggy food?

On the subject of the same prickly fellow returning - perhaps a little toenail painting could have solved any future mystery. Funny if another one turns up with toenails painted in a different shade! :-)

Great idea but I fear toenail painting at three in the morning with the aid of a flashlight and two enthusiastic pups might have been beyond us !

We rescued a shrieking shrew from the clutches of one of our cats once. We only took it round the corner tough...

What is it with dogs and hedgehogs ? Sniffed through closed doors and windows when humans can't even smell them close up. Can't wait to hear that your neighbours have found a hedgehog with painted nails in their garden, would you dare confess that you'd done the painting ?

A friend re-located a squirrel they trapped, they took it a few miles and it only took him two days to find his way back.

How do you know there's only one hodgepog?

Maybe there is a discussion going around between village cats and other critters, that it is great fun to go and work the foreign dogs into a frenzy in the wee hours.

Well, the opossum that Edward so proudly brought inside one night and that was relocated by The Songwriter never returned. Of course he did drive him halfway across town. As for the Hebrides... in less than 2 weeks, I'm delighted to say. xo

You see, You're not alone.
I thought I was feeding a frightened stray cat but actually it was an extremely large possum. I borrowed my neighbors dog carrier and put food in it and, at early morning, waited. The possum came and ate for several days and one day went to sleep. Got the broom pushed the door closed and drove the frightened possum to a safe, wild area. When I got home and thought about it a bit, I became unsettled. Quite docile, he was. Probably tamed by someone. Felt awfully guilty and went back to get him. Couldn't find him, of course. I wonder, to this day, if he lived.

They don't seem daunted by the smell of fish.

Ha ha ha! Maybe the neighbors all appreciate the relocation of your visitor as well!

I'd like a video of Angus trying to pain a hedgehog's nails!

I'm wondering how confused the hedgehog is. He curls up in one place and wakes up in another.
It will be interesting to see if he does come home.

As long as there are slugs , he'll be happy.