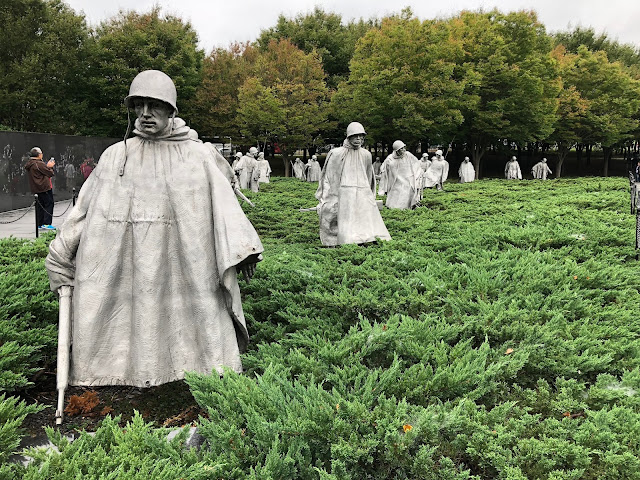 We go to the electronics store in the shopping mall. They have an Apple laptop and an Apple desk top. Neither looks as if it is 'state of the art'. ' Why don't you order one on Amazon ? ' asks the young sales assistant in that peculiarly noncommercial way you only find in France.

The Korean War Memorial in DC a new addition to the Mall since we were last there. The soldiers on patrol have been given a spectral, hollow cheeked look by the sculptor. It's as if you've unexpectedly disturbed a platoon of wandering spirits. It must be quite a veil lifting sight at night. 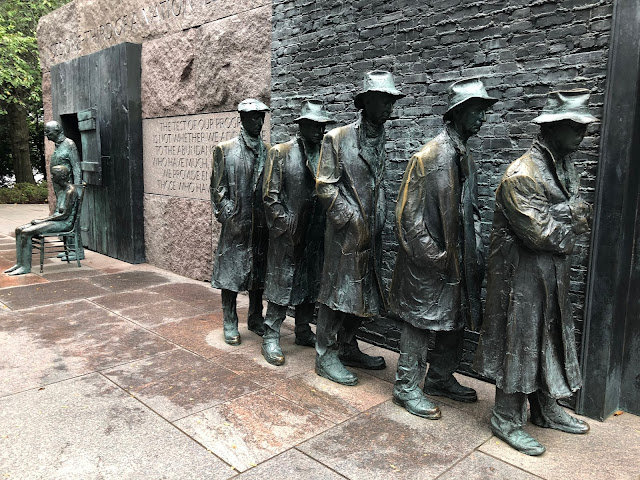 The layout of the Roosevelt memorial took time to come to terms with. This was because we entered it from the wrong direction. Many folks don't like it but the setting and words have an understated  grandeur that is very adult. 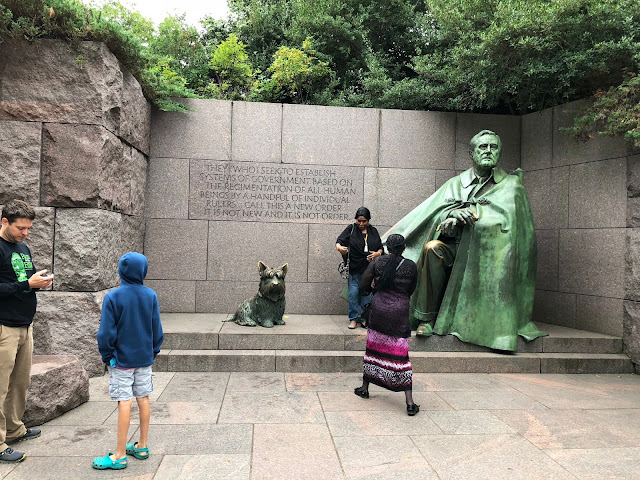 Roosevelt's knee and the ears, fringe and nose of Fala the Scottie have been touched so often they are smooth and bright. The fringe is a thing of wonder. Did the sculptor get a Scottie to pose for him ? Is such a thing as Scottie posing possible ? The story about Fala  in the minutes after his masters death is worth recording.

In the minutes after his death, Fala behaved very strangely. FDR biographer Jim Bishop wrote about the death scene: "… a snapping, snarling series of barks was heard. No one had paid any attention to Fala. He had been dozing in a corner of the room. For a reason beyond understanding, he ran directly for the front screen door and bashed his black head against it. The screen broke and he crawled through and ran snapping and barking up into the hills. There, Secret Service men could see him, standing alone, unmoving, on an eminence. This led to the quiet question: 'Do dogs really know?'" 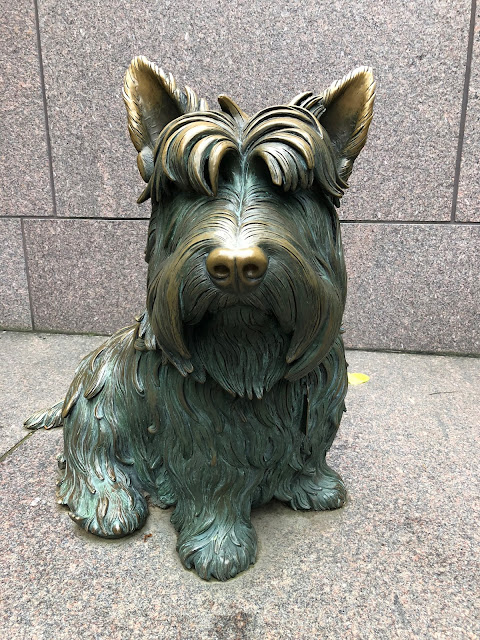 Pending the arrival of an Apple desk top the blog will now enter an esoteric phase depending on what can be, randomly, downloaded from the new phone onto the Microsoft tablet. The relationship between the two is of the 'sometimes they talk, sometimes they don't ' variety. This is at least an improvement over the total disdain the phone exhibits to the DELL.

Sunday morning music to make you whistle and smile : https://www.youtube.com/watch?v=KHYj1-3QrrY

A remarkable story about Fala. All dogs owners must spend time wondering exactly what goes on in the head of their beloved companion. But then, would we really want to know? Surely some of the appeal of dogs is that the way they develop such close bonds with humans (or a particular human) but on the other hand retain something of the wild.
Cheers, Gail.

I know exactly what goes on in the head of my Lab. - her facial expressions say it all. Mostly it's about whether it's breakfast or dinnertime !
The Korean War Memorial looks rather unnerving.

Hari OM
Now those are what I call memorials; not just monuments of glorification, but prods of ponderment and questioning.

Oh crikey - you've been usurped by the orchard. Hope you end up with cider and not just stewed apples... YAM xx

I hope you remembered to specify a QWERTY keyboard if you touch-type.
The Korean War memorial looks amazing.

The faces of the soldiers at the Korean War Memorial are from actual men who served. at night surreal and intense.

I'd not read the story before about Fala after FDR's death, I think dogs do know. But I had read that the name for Fala given to him by the secret service was "The Informer." Very fitting for a Scottie! But the memorial is a favorite, and I do think it's partly because of Fala. I really want to take Todd down there and get his picture next to him.


***By the way, I have to add, that I can't get pictures off my "Android" onto my Dell - I e-mail them to myself from my phone, and download them onto my computer. But the camera on my phone isn't nearly as good as yours, so I don't use it very often. We'll see what happens when I "upgrade" in January.

Very striking pictures of the memorials honoring the commitment and valor of men whose names are not known to us and the great compassion and courage of one so well known.

One wonders why not an iPad? Your photos would be shared immediately to the iPad without any manual intervention. The Pro is available with a keyboard option and Apple has a lovely portable keyboard I use for everything. Unless of course, you were just wanting another computer?
Pam, housekeeper for Bonnie n Kenzie, the wee Scottie girls

I love that kind of art. Really haunting. We have a friend that is going through some of the worst computer problems ever, and the experts have not fixed it yet. Going on two months. Good luck with getting things sorted. Cheers

SHE's one of those who brightened Fala's head.

What you need is a teenager..they can fix it in no time!

I know I shouldn't say ... but I had a Dell for years (and loved it and that's what my business always used) and I switched to a MacBook Pro about 3 years ago when I retired. The first days were iffy, but once I got the hang of it my Life was GRAND. Pictures move to my Laptop in minutes. I do nothing . Magical.

You're right. Of course teenage tech dependency has the downside that they grow up, leave home and leave you stranded with unforgiving software .

We were blown away when we visited the Korea memorial. It transported us right into the dire situation those poor brave soldiers were dealing with. The FDR memorial had a different effect... stark and inspiring moments of history to be relived. Glad you and the Font got to visit them. And I would love just a wee bit of the event tnat prompted your trip to the states. We ae all so happy you are home! (Not just the PONs.)

Love the Roosevelt Memorial, probably most for Fala and for the quotations--they're so intelligent and inspiring, which is much appreciated in this era.