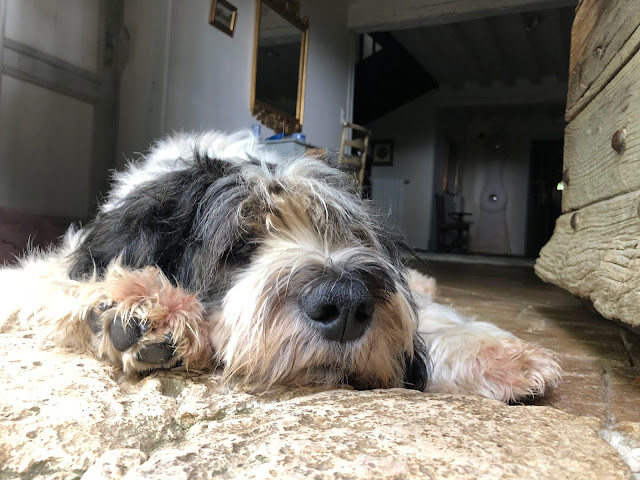 A ' What is it you want ?' start to the day look from Sophie who is enjoying the cool air after last nights mountain storm.  Female PONs leave you in no doubt as to what they're thinking. No doubt at all.

As we head out along the lane we meet The Old Farmer. His lady friend is still asleep. Seems that three days on the open road, in the heat, in the motorhome was just about enough. For his most recent adventure The Old Farmer had embellished  the rear of the venerable Ford Transit motorhome with signs outlining his plans to take  his lady friend on a tour of Napoleons battle fields. Wherever and whenever they stopped strangers would chat about what he's doing , where he's going and what route he was planning to take. After 72 hours the lady friend tired of hearing him repeat the story for the umpteenth time. The Old Farmer seems oblivious to the fact that his passion for history - and a trip across France to Belgium on a battlefield pilgrimage -  might not be shared. Angus has to quietly think this is quite an audacious undertaking for an almost 88 year old. Equally so for his 85 year old lady friend. 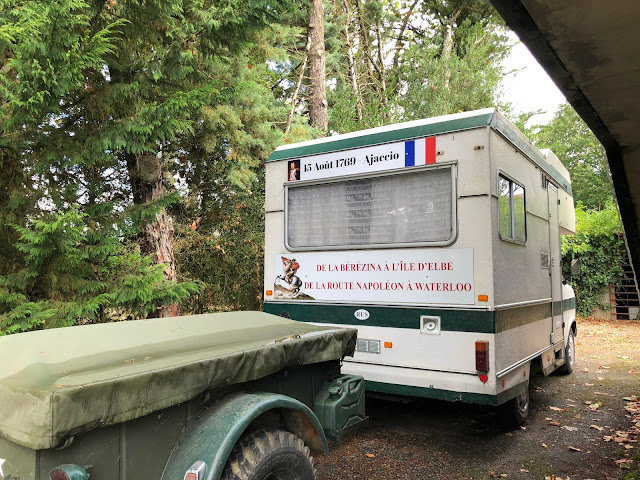 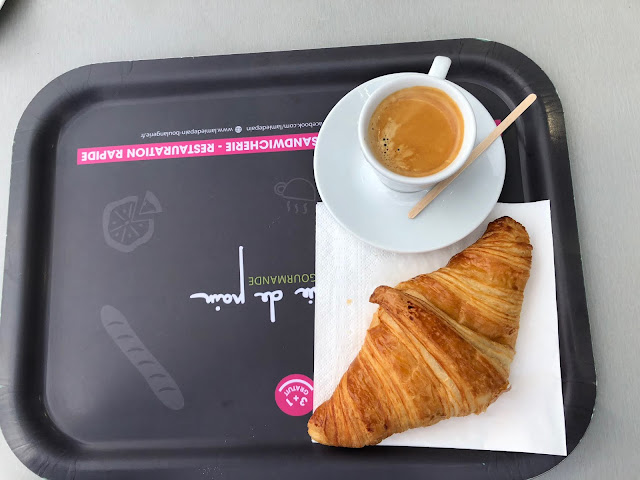 We consider buying a cake for lunch but the sight of Kiwi fruit as a topping puts Angus off. 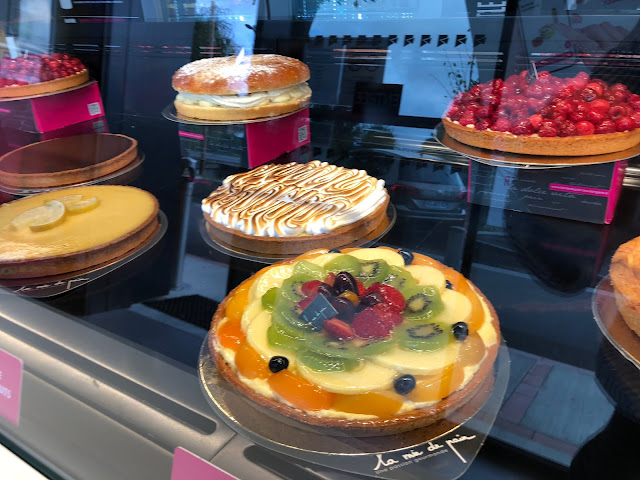 Had never heard of Electric Screen Syndrome  - until now : https://www.skeptic.com/reading_room/is-electronic-screen-syndrome-real-video-games-aggression-addiction-what-does-science-say/

Electric Screen Syndrome seems to be about the last thing many parents might want to learn about at this particular moment in time. Maybe there is some truth in some cases, but both of my kids carry pretty high rankings in what might be considered violent video games, and I don't think it's done them any harm. Maybe because they play team sports that require collaboration as well as aggression? I agree completely about kiwi as a topping - those raspberries in the back, on the other hand . . . I hope last night's storms were enough to replenish Sophie's stream for a bit.

Clearly, ANGUS, your 'patisserie tastes' do not include citron! As for yours truly, Tarte au Citron is my all time favourite dessert. Lemon anything,
really. Therefore, I find today's selection very very inviting. I think all of us who follow you daily and loyally.........are hoping that yesterday's consultation in Toulouse for The FONT brought some insight and good news. Please do wish her well from this household, on the Westcoast of Canada! She is certainly in our thoughts.

I too have been looking out for a report from Toulouse, hoping the consultation was helpful.
Cheers, Gail (also a Taste as Citron fan).

I have to agree that kiwi on a cake whilst pretty can taste a bit slimy. You have to admire the old farmer and his girlfriend, but as you say a battlefield tour may not be the most stimulating for the Mrs in a hot cameraman.

You would be surprised at how many history lovers (of all ages) reside in France. I recall a tour during les Journées de Patrimoine, and several of the crowd were quick to correct our guide on various kings, their ministers and their mistresses.
When I lived in Brussels, I visited Waterloo. It's a very tony suburb today, and the monument to the battle has a rather ridiculous gold lion on top, seen from the highway. But in person, it was very moving. Napoleon was the enemy, not the hero, to the Flemish community there. The women of what was then a village decided to do something to commemorate his defeat, but they were starving and impoverished by the war. They used what they had, dumping buckets of mud to build up the mound. I imagine them, swearing under their breaths (or aloud), and sploshing out mud with a "take that!"

A young lady like Sophie guards her beauty rest.