The most wasted of all days is one without laughter. 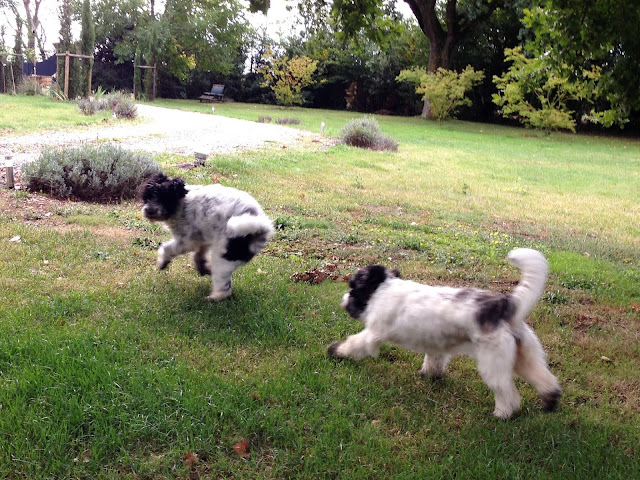 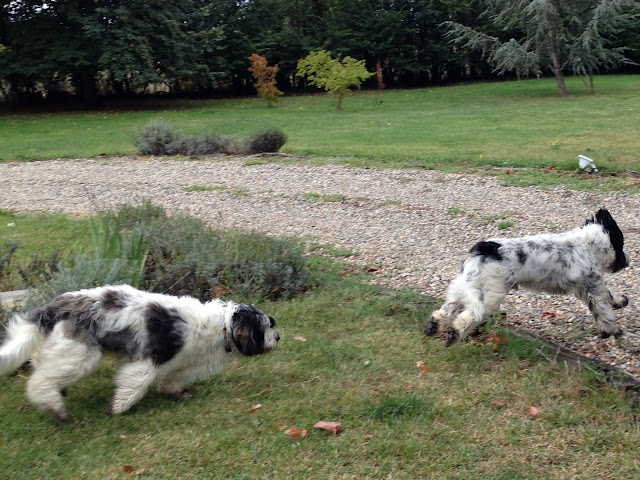 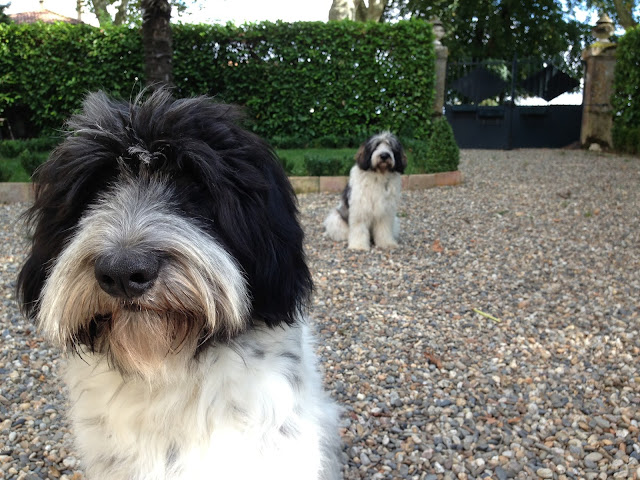 Seven o'clock on Sunday evening. The mayor, Madame mayor, the lady with the Marge Simpson beehive hairdo, the man with the yellow fluorescent vest and the deputy mayoress show up at the gate. They have had a town council meeting . Did we know that as EU citizens we were eligible to vote in next years mayoral elections ?  They stay for a glass of champagne. '' I really shouldn't " says Madame mayor , giggling, when offered a second glass. Bob and Sophie look on in silence. Sophie goes around plaintively resting her chin on every ones knee but quickly decides that there are no sausages to be had. The PON siblings wander off to create mayhem in the orchard.

Back from our early morning trip into town. Madame Bay is in the kitchen with two great grand daughters. She is dancing to the theme tune from that movie about the pet whale. One right leg darts out at a thirty degree angle, taps three times, then is retracted. Then it's the left legs turn. The great grand daughters clearly think Madame Bay is the best dancer in the world. At the end Madame Bay does a pirouette.  Bob has a quizical look on his face that seems to say '' Blimey ! " .

We discover Bob likes bananas. The clue ? Two carefully masticated banana skins , the fruit removed, on the kitchen floor.
Posted by Angus at 8:28 AM

Movie about the pet whale. Do you mean Free Willy ? Wouldn't have called it a pet whale exactly. The Michael Jackson tune was good tho. xxxx Mary Jo and Troy in Greenwich

Mme Bay seems to be recently visiting more often. She'd be a match for the Prancercise lady.
The puppies look like they are having a fine old time!
The ear cleaner has arrived and seems to be providing much relief. Thanks so much for the tip.
x

Did you get the Zymox from the US ? Our last batch arrived with the bottle epmty. The shippers had popped it in a box without sealing the top and it had all leaked out in the hold of the aircraft on the way over. Touch wood, we've had no problems with these two now that they're given a weekly ear wash out.

I thought it was the candidates that were supposed to ply the voters with champagne and not the other way round.
Great action photos of Bob and Sophie today. But what I would have given for an action shot of Madame Bay....
Cheers,
Gail.

What amazing photos of the PONs playing, I notice that Bob's the one in front, does Sophie ever manage to catch up with him and his long legs ?

Only when he wants her to.

when they're sitting posing for their picture . . . remember how wilf sat up front and little digby was very nearby in the background . . . sweet memories . . . and not unlike how bob and sophie sit.
love the action shots! airborne baby pons! a wonderful way to start monday!!! xoxo

Madame Bay has made herself at home? Hmm... I agree, I bet she'd be a lot more entertaining to watch in a video that the Prancerize lady!

If two bananas were eaten, how do you know that Sophie didn't get one? I can't imagine her willingly being left out of an eat fest!

I do miss Mme Bay

Was this the France profonde version of telling you to vote early and often?
My doglets get a couple of slices of banana anytime one is opened. They love the stuff -- supplies potassium. Cucumber slices are also a big favorite.

I fear the politics of France profonde are about to catch up with us.

Jack is more of a watermelon type of guy. He'll eat bananas but then again, he'll eat pine cones as well (or would if I let him!).

He also uses Zymox in his ears. It seems to work fairly well.

The Return of Madame Bay? Could be a movie in that.

Ah, the prancerize lady . Who could forget her ?