Men have become the tools of their tools. 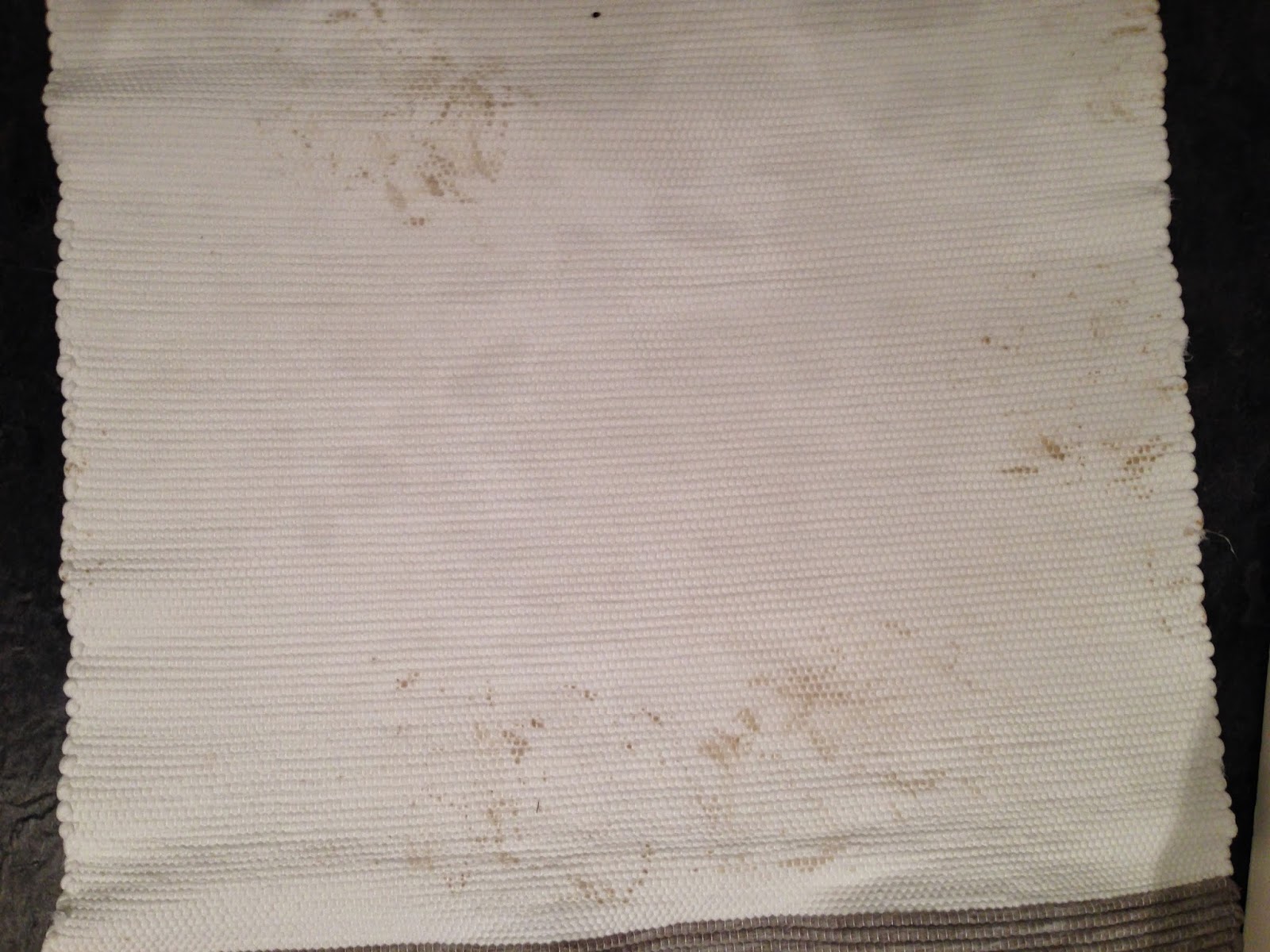 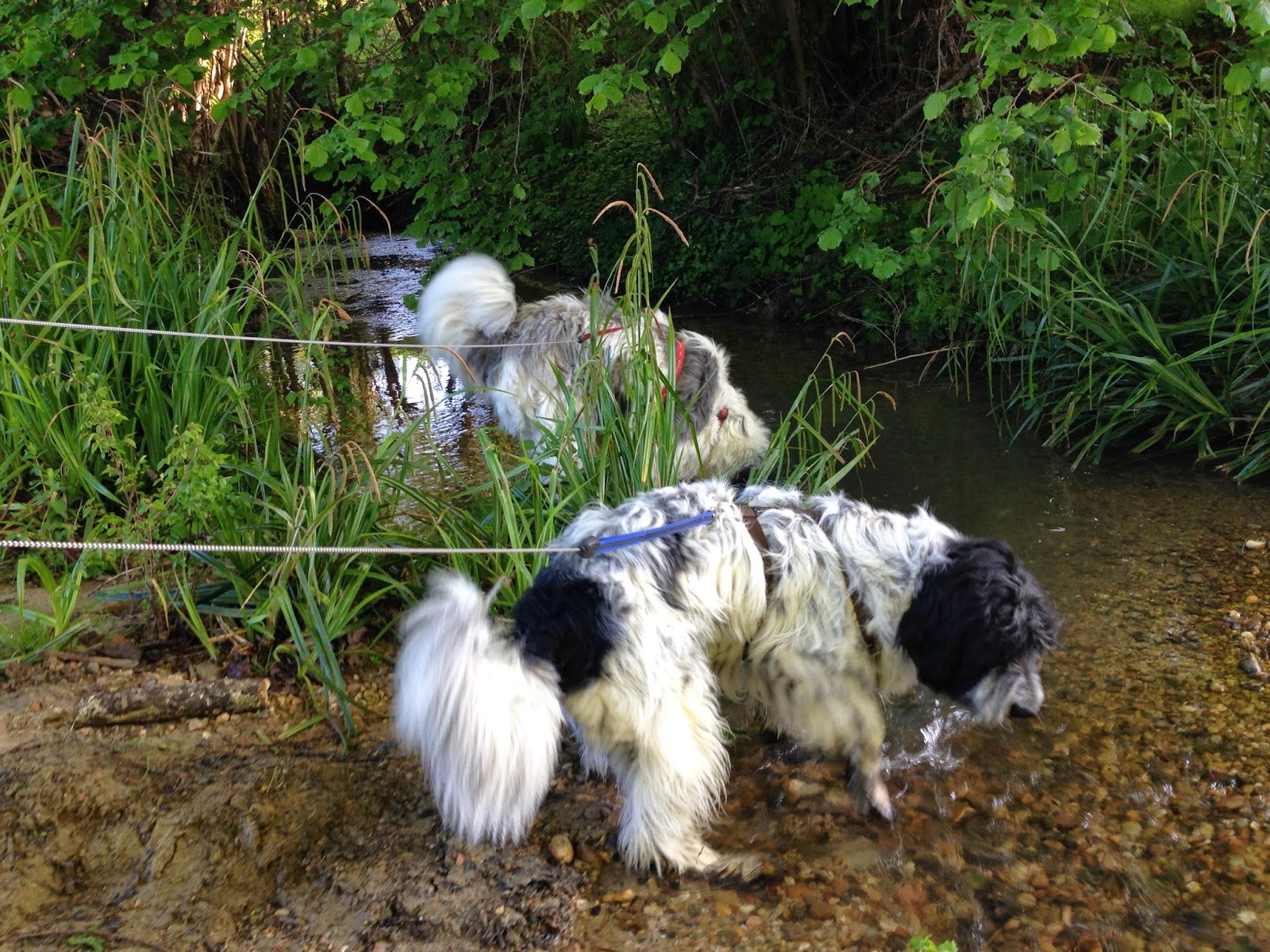 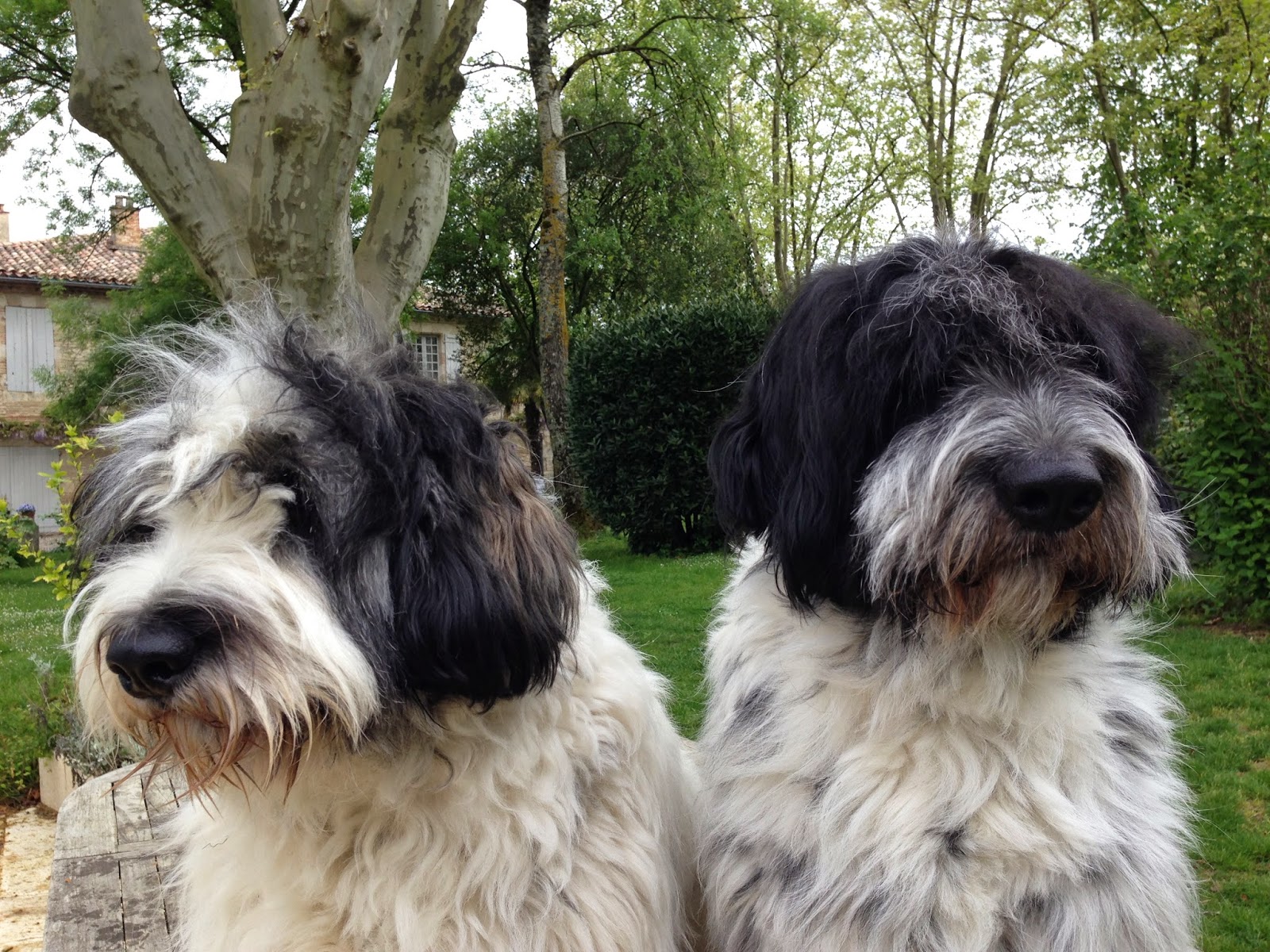 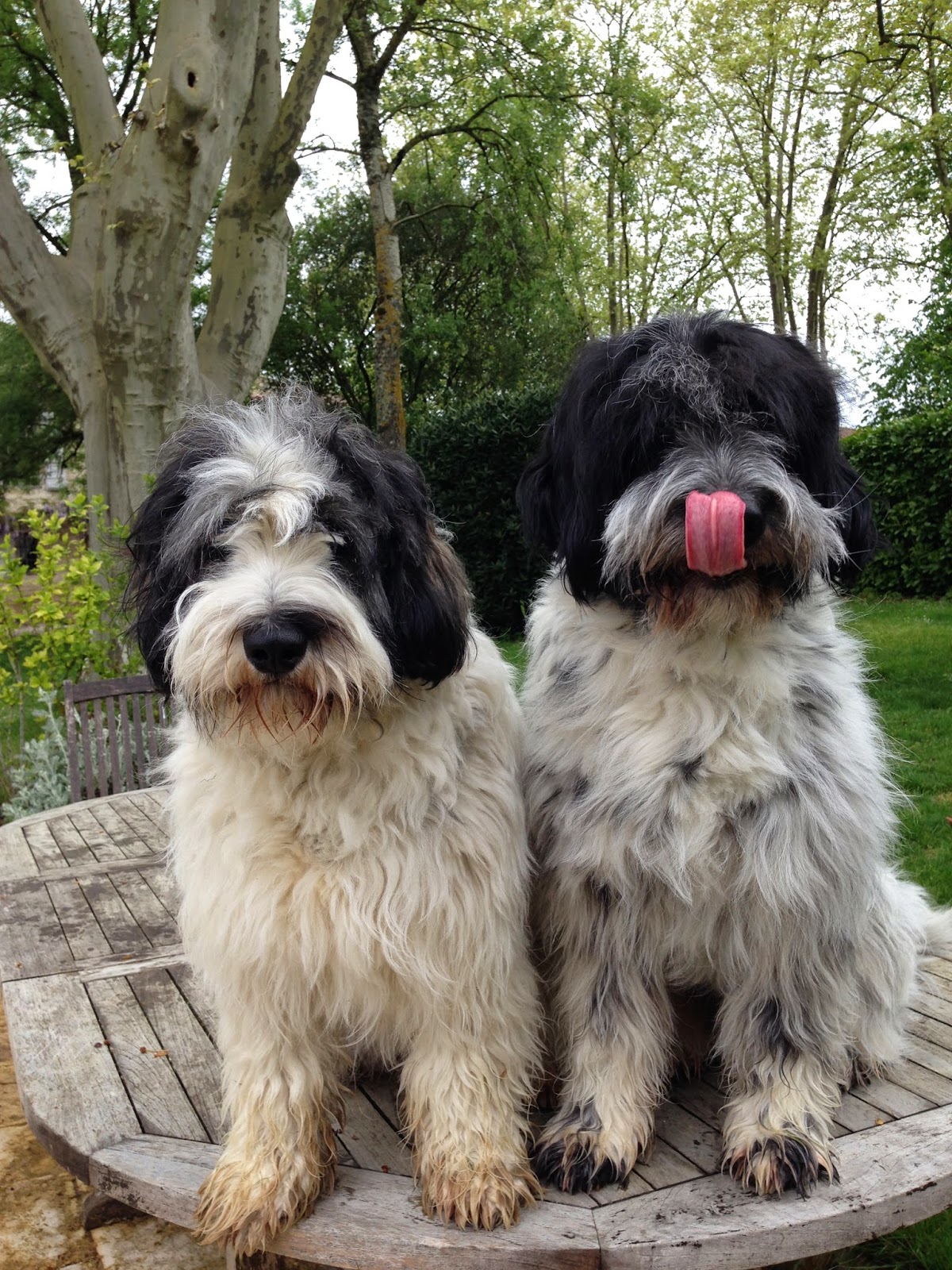 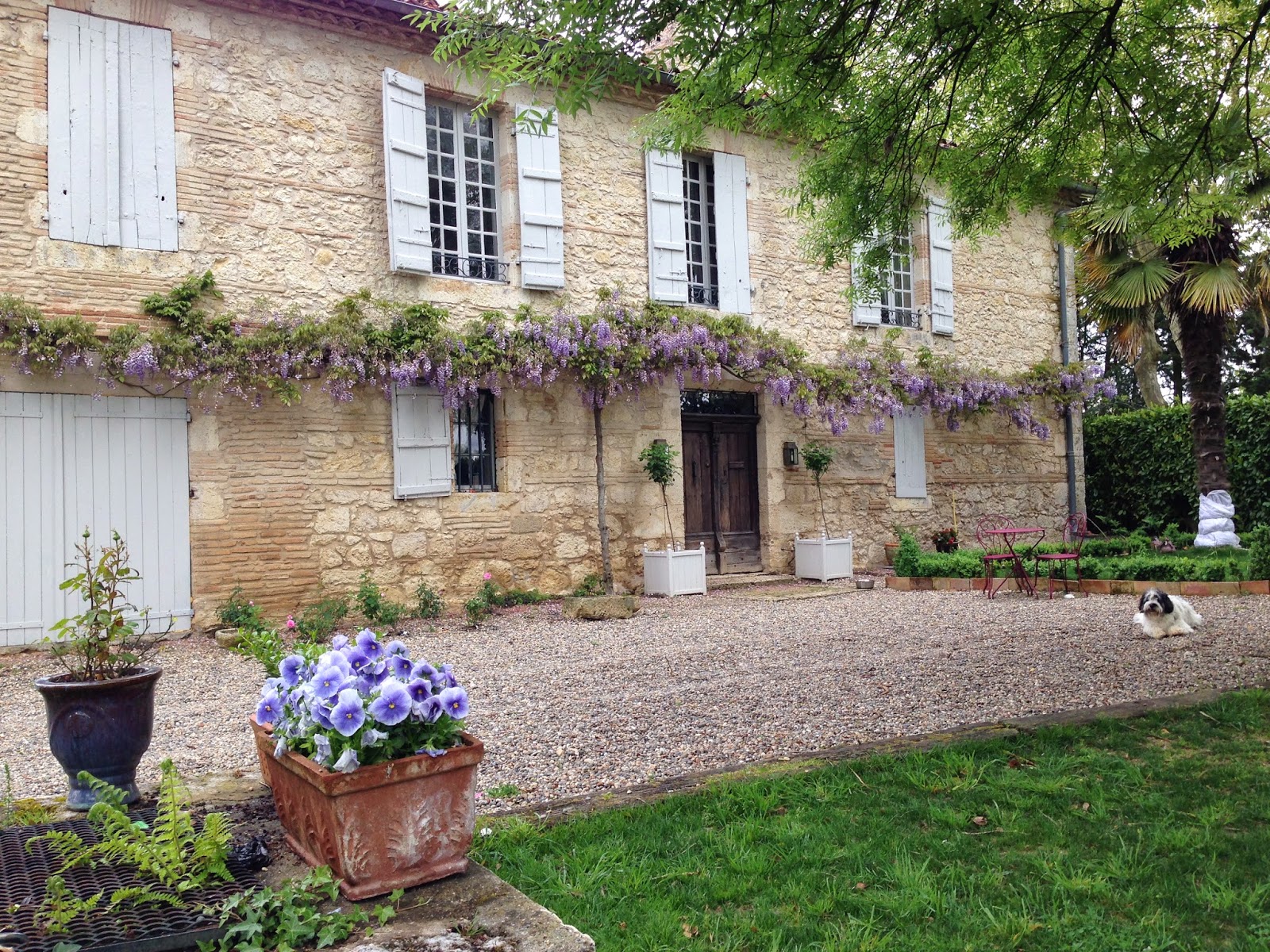 Muddy paw prints on a mat in the bathroom. Matching paw prints on the floor of the shower. That 'forbidden fruits are fabulous ' look on Sophie's face. So much for the rule that bedrooms and bathrooms are out of bounds. When caught in flagrante delicto Sophie seems to believe she's invisible. Either that or she's completely shameless.

Post lunch a wander down to the stream. Bob tries his hand at fishing. Then a saunter along the valley floor to watch the young calves in the fields ( Sophie does this from behind the safety of her owners legs). In the afternoon the PON duo chase squirrels. They don't know it yet but their first taste of kennel life is only three days away. Our betting is that Sophie will adjust more readily than her brother.

This raised an eyebrow :

ANGUS - ever since the day that you posted a photo of the "kennel" ("just in case it is ever needed") - I have feared that this day was coming.
For how long will they be imprisoned? Cooped up. Jailed. In the slammer. I could go on………but it looks like the deed is (almost) done. Will
SOPHIE and BOB be posting on the blog - while you are away? Will they be taking their beloved garden table with them? Or the newly-christened bathroom mat? We do hope so. Hurry back from wherever you are off to - they need you, as do all of us. Greetings - and best thoughts to the DUO -
from the Westcoast of Canada.

No No NO! Bob and Sophie, don't let them put you in kennels. I've only just escaped. So relieved that I can express myself via my blog as my bark is now just a pathetic croaky squeak…
Toodle pip!
Bertie.
PS About that mat. Tell Angus to chill. It's only mud.

The chocolate cross--sold out on line. Must have been popular.

No rooms are out of bounds for the dogs.....just sayin'.

A pathetic croaky squeak would get the villagers vote.

You're right. Out of bounds a phrase that isn't in the canine dictionary. Can't imagine a chocolate cross being sold in Europe.

And her brother continues to eat the plaster off the walls. Interior decor PON style.

Shameless. No doubts about it. She's quite shameless.

Hi, it's me Brownie, joining in to defend my girl Sophie....I would have to say that the muddy prints on the mat in no way resembles the paws of my friend Sophie....just looks like mud to me... from maybe your feet when you came in from the garden....Daddy Angus that's quite shameless of you to blame my friend Sophie.
Sophie my friend you will be going to a kennel in three days time, and you and your brother Bob will be there for three days, but you didn't hear it from me.
Your pal, Brownie

Will the kennels give them croissants?

Will Bob and Sophie share an accommodatIon? As long as they're together, incarceration won't be too awful....we hope. Will you be sending
along their usual food as well as some tasty treats to mix in in case they feel unsettled?
Chocolate crosses, chocolate
covered marshmallow, have been
around forever here. Never really
thought about them.

Much as we adore Madame Bay her attention to little details like closing gates or locking doors is doubtful.

No, Madame Bay, jamais ça! Better kennels. Our two are always much better behaved for a couple of days after kennels! We laugh, but I always swallow back the tears on leaving them there. We do have them share a "double" which relieves our consciences a little. I am six weeks behind but enjoying catching up with you, The Font, and those two mechant rascals.

At least there was no chocolate Jesus on the cross - although I'll bet those exist somewhere, too :)

I do believe Sophie has super powers and can indeed be both invisible and shameless all at once. Does Sophie know what goes on in the shower? That you can turn heavy rain on at will? I think my dog has witnessed this and I can't imagine he would ever go in there willingly. I usually have to crawl way under the bed to retrieve him if he merely hears the bath tub being filled!