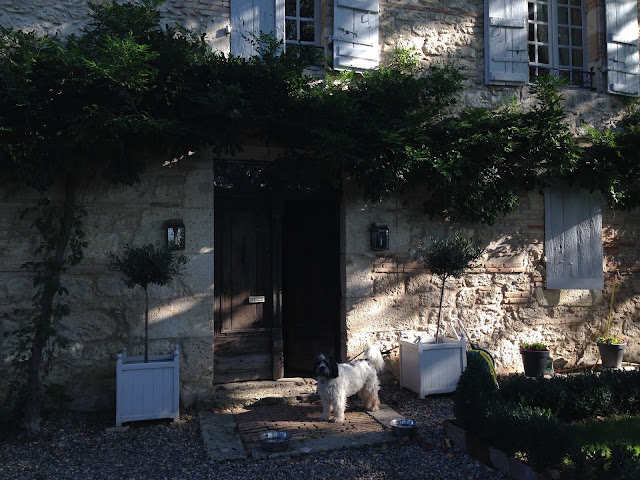 Sunday morning. That wonderful time of the year when the mornings are still warm but the air is clear and hints at winter and endless skies. Sophie waits impatiently for her brother. On the telephone wires hundreds of swallows sunning themselves and chatting distractedly away. Can birds be happy ? From the joyful cadences the journey ahead is viewed with delight. 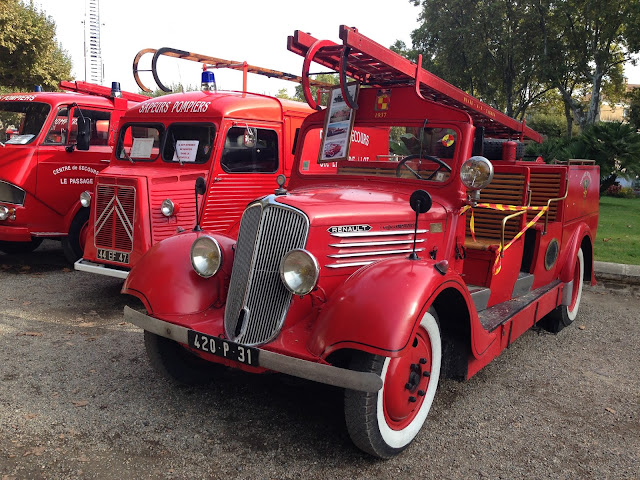 In the little market town the local firemen are displaying a collection of historic fire engines. Bob de-threats the tyres. Thankfully, nobody notices. Or, if they do, they don't say anything. 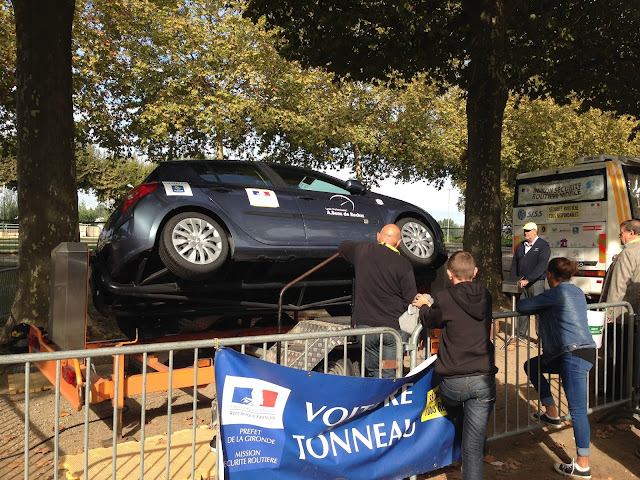 The road safety organization has a little Peugeot mounted on a gimble. This spins the car round head over heels five time to simulate an accident. There are certain ages when you can have breakfast and then be spun rapidly around. Angus has reached an age where this is definitely not advisable. 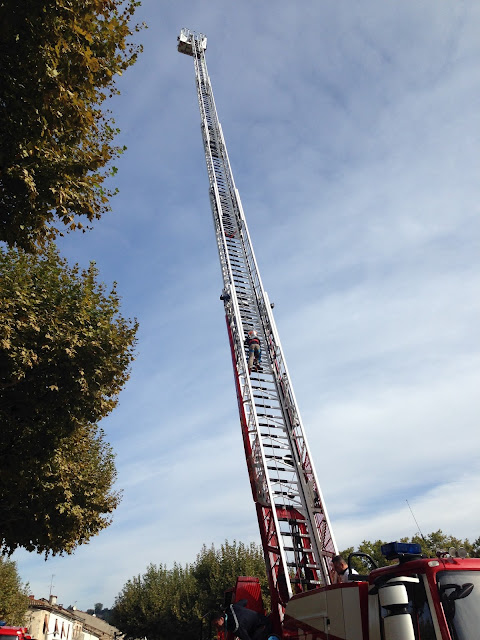 As we leave there is a small drama. A six year old child, male, has been allowed to clamber onto a fire tender and try on a fireman's helmet. This is what is known as community PR. The fireman turns his back and next thing you know the six year is shimmering up an immensely long ladder. When we hear the screaming he's clambered up fifteen feet or so. Six is an age where fear has yet to make an impact on the psyche. Mother is apoplectic, Father is wishing he'd stayed at home , Fireman is agitated, Child is oblivious to the pandemonium below. One wonders how parents of young males ever make it into middle age with their sanity intact.

We bet the six year old male could be spun around after breakfast, too.

I think that puppies can be a lot like six year olds....

And unfortunately, we won't be able to see the eclipse tonight, too many clouds.

I heard an ornithologist being interviewed the other day who said that chattering swallows
which gather like that prior to their migration are in fact "discussing" the route they'll take.
Seems somewhat improbable, but I want to believe it's true.

Many years ago, when our son was still small, there was a saying that went around - its called the 3 I's of a teenage/young male. Invincible, immortal and infertile. :) I think it suits any age, male or female. I can only imagine the fear of the parents.

Angus at age 6 on the ladder?

Always loved the French name for fireman. For the six year old boy, I see great future as a sapeur pompier.

Do not know if birds can be happy, however I know they can be unhappy. When the bird feeders run out, they can get down right angry! Humming birds even unite to let their frustration be known.

Love the fire engines and the swallows sitting on the telephone wires....deepest France profonde sure has a nice atmosphere.
Now as for the inquisitive 6 year old climbing the ladder he would have had a scolding from me and then a hug after he was rescued....gosh his mother's heart must have been in her hands.
Tonight I will be checking out the lunar eclipse...thanks for the reminder.

That fireman will be better prepared in future.

Eclipse was spectacular. Th meen a deep red. All the owls stopped screeching.

Applies from six to sixteen - or perhaps twenty six.

I thought of the Cost Centres.

I'll keep an eye out for flocking humming birds.

Hope you get a cloudless view.