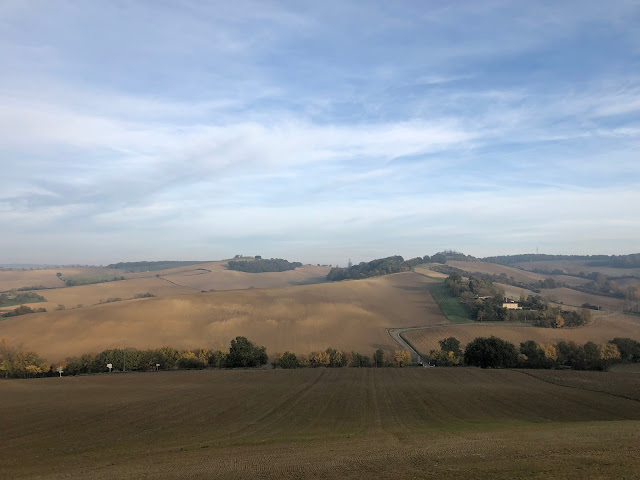 Winter upon us. This morning the high sky shimmering with ice crystals. There was a general strike on Thursday but we didn't notice it. In the Post Office  the two women behind the counter were working to rule and insisted 'The Font' buy stamps from the automatic machine. '' Sorry, can't help you. We're on strike ".

Last night the local volunteer firemen showed up at the gate to sell their Christmas calendar. I thank them for their service and give them 20 Euros. ' See you same time next year ' they shout out cheerfully when driving off. This is a sentiment I can agree with. 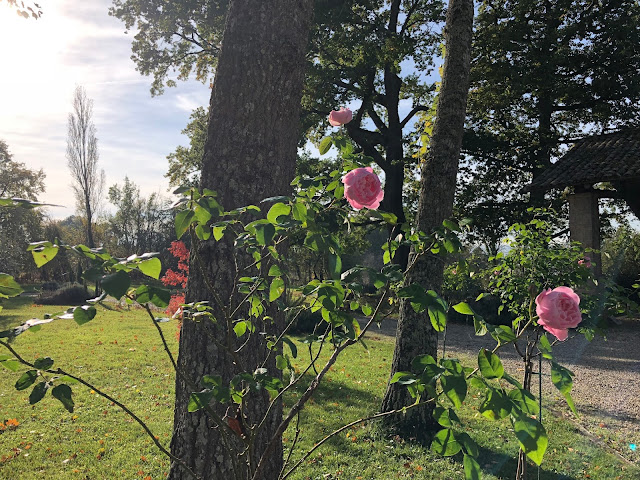 The roses still in bloom. 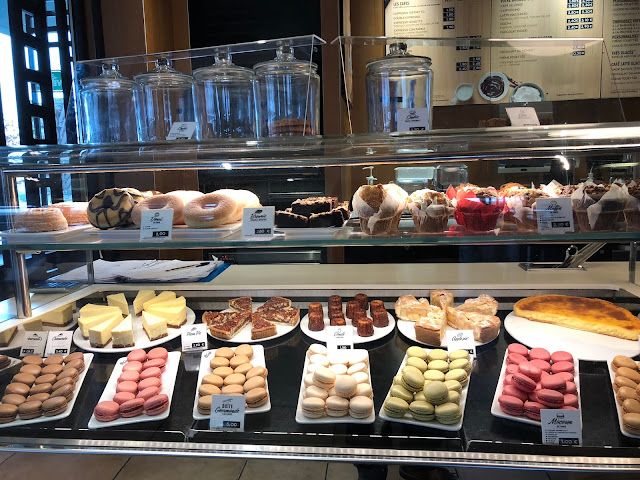 After our morning walk Angus and the PONs go to the McDonalds by the motorway pay booth. Bob and Sophie are briefly tethered to a red metal bench while I go in and order. A young woman wearing a lot of mascara is mopping the tiles by the Ronald McDonald climbing frame . She is listening to a gaunt faced young man wearing what appears to be a pair of camouflage pyjamas. The camouflage is of the black and grey swirly type much favoured by middle Eastern armies. ISIS chic. The young man has a haircut that is very short at the sides but sticks straight up on top. This is presumably fashionable. The couple appear to have had some form of romantic misunderstanding.  Snippets of their conversation drift over to us. '' You're the only girl for me " followed by a more demonstrative " It was only a kiss " followed by an even more demonstrative " Honest ! ".The young lady has stopped swabbing and has turned her attention to emptying the rubbish bins. She works while maintaining a glacial silence.

By the time we leave the young lady is placing new plastic bags in the rubbish bins. She is still ignoring the young man. Angus explains to Bob that young males of the species operate in the belief that exculpatory adverbs make a bad situation better. They rarely do. Honest ! 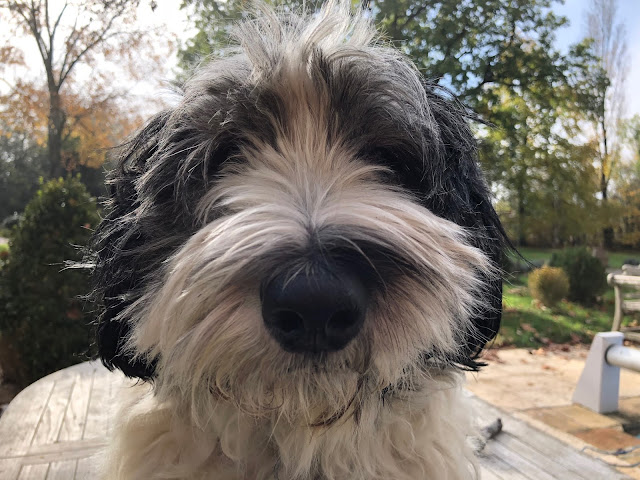 The PONs have their ears plucked and washed with Zymox. Sophie doesn't like her ears being plucked but doesn't object to the Zymox. Bob objects to both. 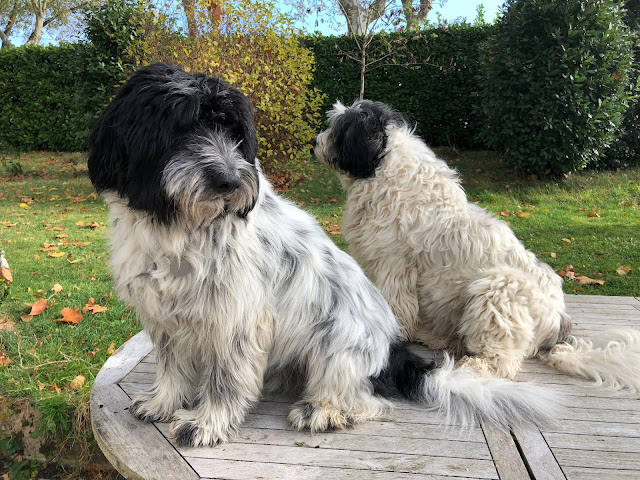 At the greengrocer we pick up some potatoes for Sunday lunch.

So starts a quiet Sunday in deepest France profonde. 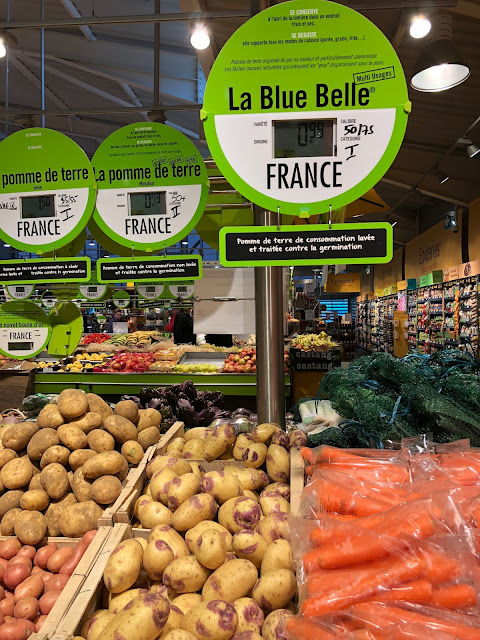 I've never been to a Cheese Cake Factory and was ignorant of its architectural riches   : https://www.eater.com/2017/6/21/15835074/cheesecake-factory-interior-design

It sounds like the young man was sporting a Kim Jong-un...

Ear problems are abounding here! The only thing that our crew likes about them are the treats they get at the end -- Like the Cheesecake Factory, dessert is the best part. And a slice of cheesecake, depending on which one you get, can be $8.00+

Poor Bob, he's not always the bravest of souls is he ! I would have thought that he would be stoic when his ears are plucked and Sophie would scream blue murder !
Interesting article on the architecture - but is the cheesecake any good?

I have been to a Cheesecake Factory in U.S. flyover country, and it looked as if it were the kind of mass-market, over-the-top faux-luxe junk-food purveyor that a certain orange-haired aspiring autocrat would approve of. I was not impressed by the cheesecake. When you've lived in France for years and have gotten used to food cooked from scratch from real ingredients, chain food tastes like chemicals. Which it is, mostly.

I’ve read about the firemen offering their latest calendars each year in Peter Mayles’ books. He usually offered them a drink as well! I could never figure out what the decor of the Cheesecake Factory has to do with the food..

I grew up in a German household with German and New York cheesecake. I quite enjoy the Cheesecake Factory and other menu items. If this helps to make it palpable, some locations give homeless and those in need a place to sit down and food to eat for Thanksgiving. At all locations, if you buy one type of Cheesecake, 25 cents is donated to Feeding America.

Hari OM
Seven weeks, and it will indeed be 'next year'... and now I will have to pay more attention when I watch 'the Big Bang Theory'. YAM xx

I feel the need to ask this question today. I have put it off in the past.
You have left the fur babies tied outside and I would like to know don't you worry about someone coming along and taking them?
I know in the US you couldn't do that. Someone wold take your dog in a heartbeat. They have broken into cars to seal dogs and cats. Shouldn't leave pets in the car anyway because of heat.
I would be so worried about someone taking your beautiful dogs.
Just a worried follower.

Don't worry. I can see them through the plate glass windows. You can also rest assured that Bob and Sophie would alert me to the approach of anyone who wasn't carrying Jaffa Cakes.

The Cheesecake Factory set on Big Bang Theory looks more like a Perkins Pancake house than CF. I've often wondered who they think they are trying to fool.
Pam

...still none the wiser - but thanks for the info! Yxx