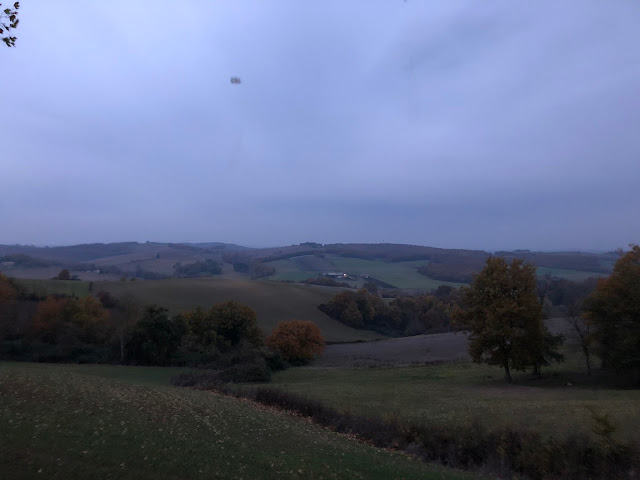 Thick Atlantic cloud - layer upon layer of it - makes for a somewhat gloomy start to the day. 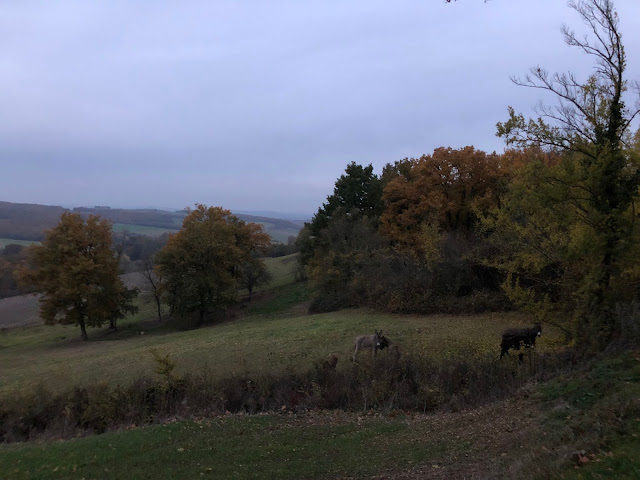 The donkeys barely visible in the darkness. 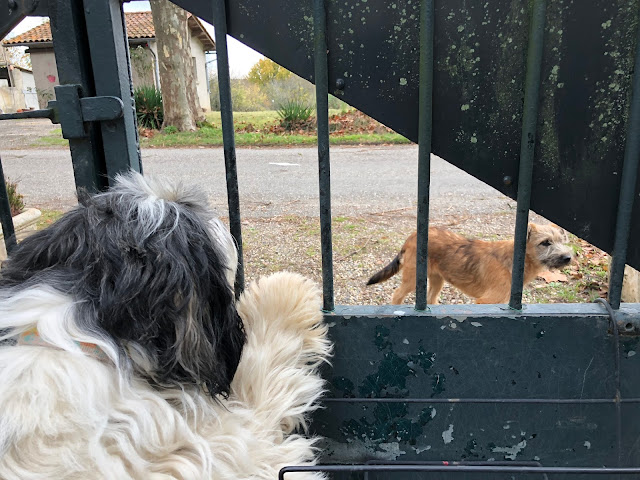 Later, when it's brighter, the plumbers dogs come a calling. Sophie once again demonstrates the warm and welcoming side of her nature. 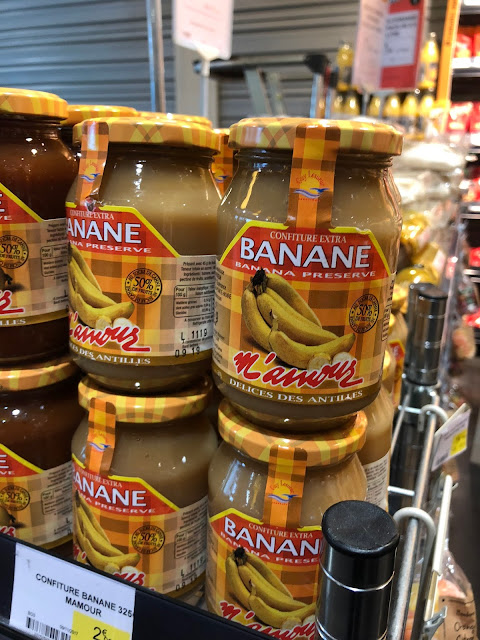 Banana jam in the greengrocers. Horrible.

The greengrocer has placed packs of Christmas chocolates next to the cash desks. A harried young mother with three exceptionally energetic boys is ahead of us. Her three year has an atomic meltdown ( of the fall on the floor, kick your legs, become a dead weight and scream variety ) when told he can't have a chocolate Santa on a stick. His big five year old brother silently eggs him on. The little one year old brother, seated in the back of the shopping trolley, feigns innocence but files the scene away for future reference and embellishment. 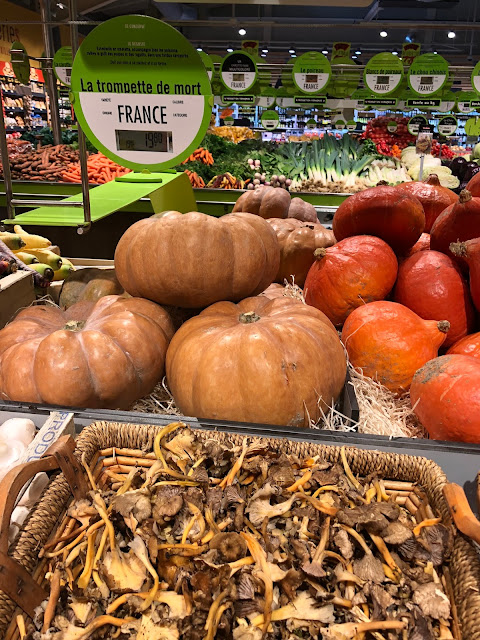 In an unrelated development Trumpet of Death mushrooms make their seasonal appearance.

Sophie so wants to play the host. Perhaps sometime soon? Those pups seem quite keen to make the Pons acquaintance.

I wonder if the plumber's dogs know about Throw The Furry Fox, and Jaffa cakes?

Bluh banana jam. Why not just have a real banana on toast.

I agree that banana jam sounds revolting.
Some supermarkets here avoid putting chocolates by the checkout, a policy that I suspect the harried mother would welcome.
Bertie wants to see more of the plumber's dogs.
Cheers! Gail.

Hari OM
Mashed banana... bottled? wwwwwhhhhhyyyyyyy???? Keep at it Sophie, one day those gates will open. Am glad I don't eat mushrooms. Or turkey for that matter. Now to get things ready for a rugby session; both my home countries. I can't lose! YAM xx

Some of the grocery stores here have "candy-free" checkouts to avoid those atomic-meltdowns. But it doesn't stop them in the cereal aisle when they can't have their Captain Crunch, Trix, etc.

I've known several people who have deep fried a turkey. And they all said they'd never put one in the oven again, that's how good it is - crisp skin, juicy and not dried out. On the flip side, buying the fryer to do it, added to the expense of the oil, it's not the most economical way to cook one. Also on the news every year you hear about someone who did it wrong and created a giant flame ball like the video you posted that can burn down house a house and sadly it has.

I like the idea of the one year old filing away the tantrum scene for future reference.
Frying turkeys is very popular here in Texas. In order to avoid the disaster noted by Kim, it's recommended that this be one in the middle of the driveway with the car well out of the way.

Yum. Deep fried turkey is delish. You get turkey bombs when you have too much oil, the oil is too hot and you put the turkey in too fast and too wet.
Bonnie, the wee Scottie

The possibility of banana jam had never crossed my mind.
Sophie does seem most eager to befriend the plumber's dogs. It would go a long way to make a best ever day.

Congratulations to Team Scotland in the Rugby. I would like to say Australia was robbed but I cannot. At least my Scottish Pop would have been happy for the win