Talk about good luck. This morning we get our flu and C-19 jabs at the Community Hospital. Two cancellations showed up on the website just as we logged on at midnight and we got both of them. 'The Font' had a booster in France in May, Angus hasn't had one since last November. 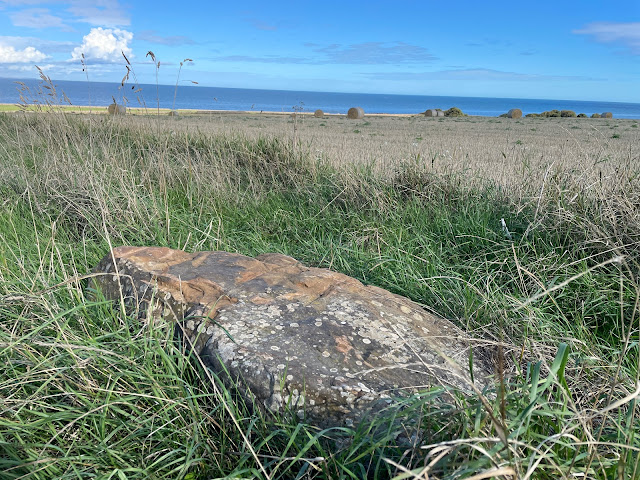 On Sophie's sunrise comfort break we meet the woman archaeologist who unearthed a burial chamber on the foreshore. More discoveries are appearing. She takes us to see some fallen standing stones. They're hidden in the undergrowth down by the heron pond . Most have been incorporated into the stone walls of the broccoli field but a few of the largest lie where they fell. They don't appear on any map but  seem to be part of a large stone circle that was built down on the fertile ground along the coast. Angus finds it rather reassuring that people have been walking these very paths and marveling at these coastal sunrises for the last four or so thousand years. 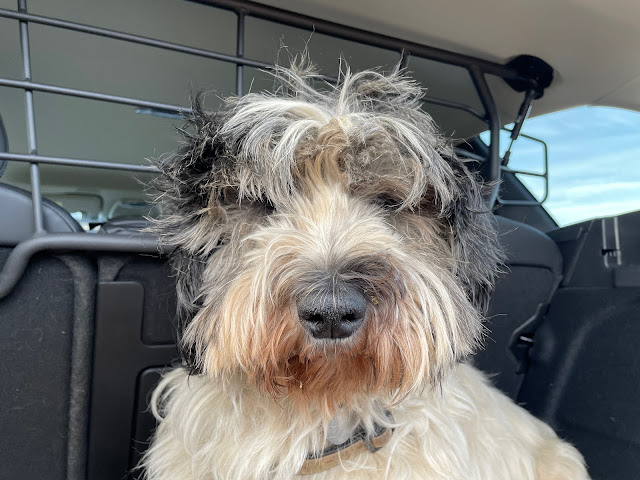 Sophie is less than impressed with the fallen standing stones. She has her mind set on her start of day croissant. 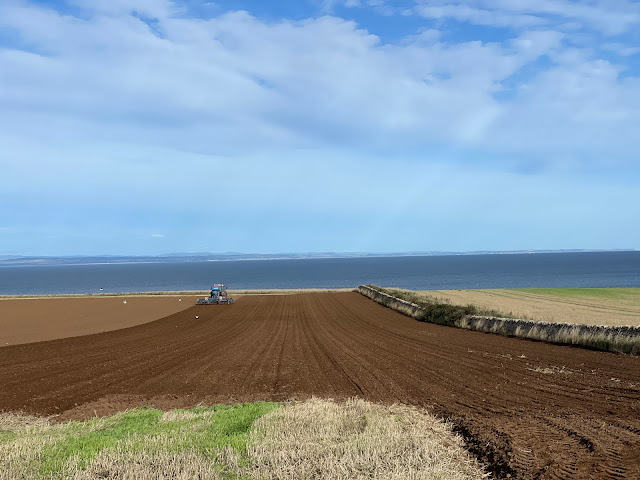 Last night 'The Font' thought it might be a good idea to go out for a pre-dinner drink. Angus suggested the bar in the fancy hotel that's a four minute drive away. 'The Font' thinks that option is lacking in character. We head off instead into the little coastal village. 'It's a lovely night. Let's sit outside' . It is indeed a lovely night but the thermometer reminds Angus that we're no longer in France. The suggestion we move inside is met with ' A little cold never harmed anyone'.

The bar has a limited wine list. There are two wines that can be served by the glass. The barman suggests a cheeky little Romanian number. ' You can get it in both red and white '. The alternative is a super sweet Portugese desert wine. Angus settles, unhappily, on the cheeky little Romanian. He hopes that he didn't let slip an audible ' Oh my God ! ' of despair when faced with these choices. 'The Font' asks if they do non-alcoholic cocktails . 'Leave it to me ' says our host with a momentary hesitancy which suggests he's never made one before. Angus intuitively knows we are about to enter a gustatory twilight world . The non-alcoholic cocktail turns out to be raspberry syrup, tonic and crushed ice with a couple of  raspberries placed on top. Even 'The Fonts' determination to find something positive in every situation is tested by this. 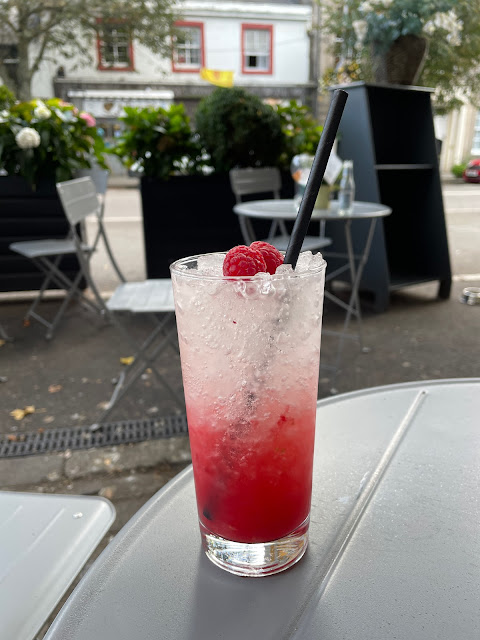 Definitely not in France now...

Your drinks menu reminded me of a drink called "Purple Death" , which is still made and sold in NZ, that used to appear often at parties I went to in the early 80s held by friends in the Air Force who lived near the vineyard so bought it by the case. The label description (worth reading) described it well. I won't be drinking it again! https://www.flickr.com/photos/stephentrinder/36429039716

You would think, given the nearness of the University and Golf Club, that something a little more sophisticated would be on offer. Perhaps you should have stuck to your original idea!

OMG, I certainly remember "Purple death" in the 1980's and do remember drinking it as guests of certain gentlemen at an airforce base, however, not the one you are referring to. It was lethal and I was suprised to see it for sale at a local liquor store recently. I did briefly think about buying it for old time sake but that thought quickly past, thank god.

A sophisticated choice of bar.

Hari OM
...there is a hint of a croc about that rock... that saltwater kind.

I like a SLAB; soda, lime and bitters. Ta. YAM xx

I guess the Font will be seeking a little less character in the future and Angus a few more wine by the glass choices. The archeological goings on are quite interesting. Did Sophie get a bang trim a few days back?

I burst out laughing at your description of your less than satisfying pre dinner drinks. Surely the host could have come up with something a little more imaginative as a drink topper than two lonely raspberries...particularly when he's subjecting his guest to a nauseating mixture of tonic and raspberry syrup.

They probably have a decent single malt,

I've been reading your blog on and off since Wild & Digby days. Funny how I so love to read about you days and travels.

Faced with another choice of red or white taverna wine (by the kilo), F and Mr B opted for the only wine on the two line list that had a name. It was still a pig in a poke even though F could read enough Greek to pronounce it. It turned out to be nearly black and the first sip sent them reeling - more for the unexpectedness than anything bad. Isn't Gurgle wonderful? - before they had gone further F had researched and concluded they'd ordered the Greek equivalent of Port - by the large glass. And rolled home. Beware the mavrodaphne.