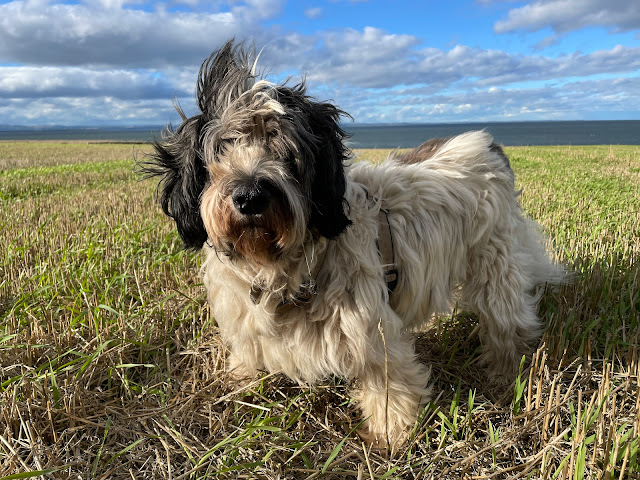 Clouds scudding in from the west but it's bright and breezy this morning. May and September are often the best ( as in rain free ) months to be in Scotland. It is however decidedly chilly - as in shock to the system chilly.
Sophie glares at a flock of geese and stares skywards at a hundred or so circling skuas. Neither geese nor skuas seem overly alarmed by the presence of the PONette. We sit on the beach and start to put the world to rights. Our conversation ends abruptly when Sophie spots an Oyster Catcher and gives chase. She does this in a head back, howl to the heavens, way. The bird goes right, Sophie - true to form - goes left. For some reason Oyster Catchers infuriate the PONette. Figure that out ! 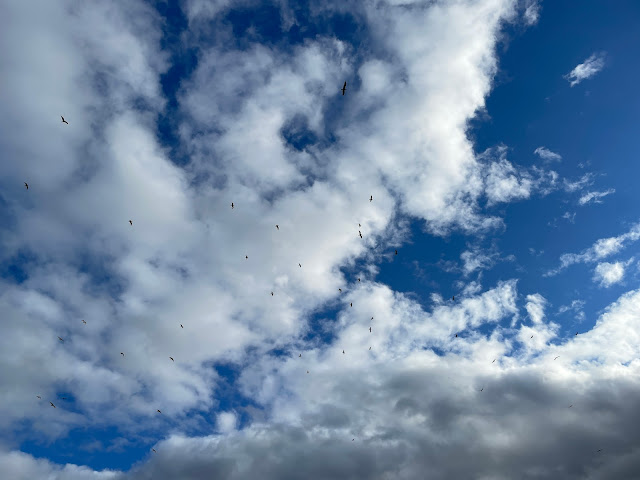 This morning dog and master take a seven minute drive to the new click and collect cafe at the garden store. Someone has worked out that opening before eight catches the morning rush hour. 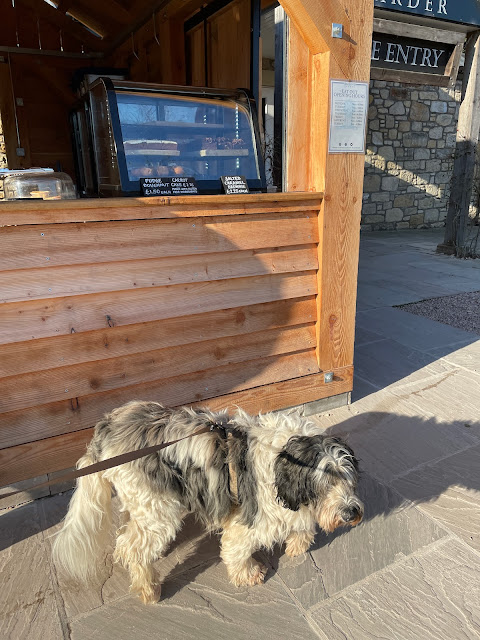 The click and collect croissant is warm. This is perhaps the only thing Angus can say in its favour. Sophie by contrast thinks that a hot croissant is wonderful. Her tail does that manic ' I've died and gone to heaven ' thing.  Angus scores todays offering a 4/10. Sophie gives it 11/10. We are the first, and so far, only customers. Early mornings in Scotland are not the time to be seated at an outside table unless you're a dog owner with a lively and enthusiastic companion with a double layer fur coat. Angus wonders how people can both move and hold down a day job. A new washer/dryer is expected today. We are  unhelpfully told it will be 'with you in the afternoon '. There are more three pin plugs to wire up. The rest of the day when not waiting for the washer/dryer will be spent chasing up the  builder/electrician/plumber/ joiner to rearrange visits that have been cancelled because of the Queens funeral. The conservatory people say their waiting time is a year. The kitchen folk say they have a nine month backlog. I wonder if inflation or recession will change these timelines ? The gentleman from the auction house came and went. He says we'll get a valuation later this week. We shall see.
Posted by Angus at 8:07 AM

The croissant obviously looks much better than it tastes, it depends on who you believe - Sophie or her master!
Glad you've finally found somewhere to sit and put the world to rights. Even more important in this changing world.
The latest national events in the UK must be a good excuse for no-shows or delaying work to be done and tacked onto Covid lockdowns must mean some people will be waiting for a very long time!

I'm afraid that after nearly a quarter of a century living here, I've concluded that the idea of a relatively rain-free September in Scotland is a bit of a myth.
And never mind Sophie, it will soon be Angus who needs a double layer fur coat.
Nobby thinks oystercatchers, especially when gathered en masse, are irritatingly noisy creatures.
Best of luck with the various trades people...

Hari OM
Yes, I fear the May-September thing is now not to be relied upon as it was in our youth... here by the Hutch, we've had more rain in the first fortnight of this month than many nations have in an entire year. I love that Angus is seeking to maintain routines well established en Francaise... and look forward to seeing how he adapts them! YAM xx

I’d love to see the Scottish croissant alternatives, muffins or scones perhaps? Sophie looks so happy. Is there still a grooming table for the occasional bang trims?

I say finding a 4/10 warm croissant so close to "Sophie Beach" is a win.
I love seeing it all, especially Sophie's hairdo du jour!

Last night's low in the south of France just past Toulouse was a sticky 24, with a "feels like" rating of 33. Even with a fan on, it was too hot to sleep. Not helped by a thunderstorm in the middle of the night which required shutting all the windows that had been left wide open in hopes of getting some cooler night air. The air was wetter but not really cooler. This is supposed to change dramatically in a few days, with a low of 9 early next week.
Do you have news of the Old Farmer?

Perhaps Balgove’s scones would be a better option.

Click and collect? Sounds like a 21st century version of my once much enjoyed Horn and Hardart automat in Philadelphia and NYC. No croissants though. Cherry pie.

The final touches are going into our kitchen replacement, it took the better part of a year. Cabinets took almost five months to be made, appliances I compromised to what we could get in 5 months, rather than what I really wanted. The induction cooktop I wanted had a 12 month order backlog.