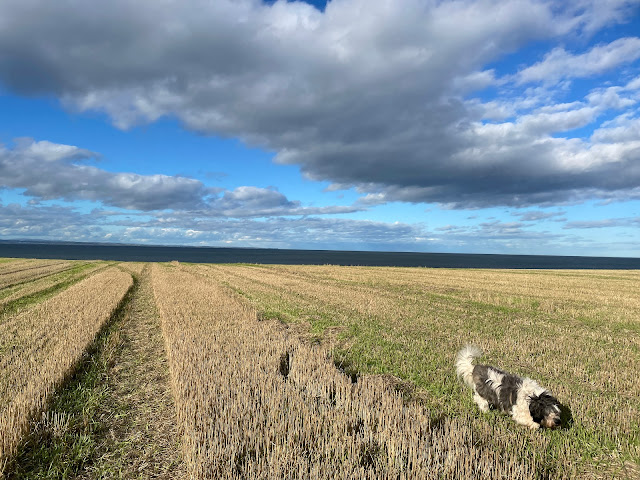 The mornings darker now. Colder too. Up here in the north summers endless days are quickly giving way to autumn. The sea today a deep gun metal grey speckled with white horses. Out on the horizon two oil rigs heading inshore from the storms. None of this bothers Sophie who loves this colder weather. In fact she thrives on it. That double layer fur coat is proving to be just the thing when checking the fields first thing in the morning. 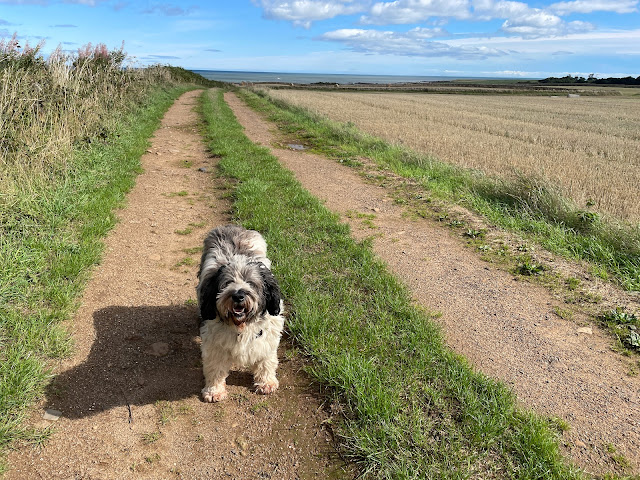 We're not sure what shops are going to be open during the Queens funeral on Monday. I'm guessing not many so we'll 'top up' this morning. Restaurants and cafes are all advertising their wide screen televisions. Sophie and Angus head off to the farm shop for a roast chicken, a pint of milk and some breakfast sausages. This morning dog and master try a pain au raisin from the Click and Collect. The pain au raisin is more recognizable as such than the croissants. I'd give it a 7/10. Sophie , who is restricted to the 'pain' rather than the 'raisin' thinks it warrants a 12/10. 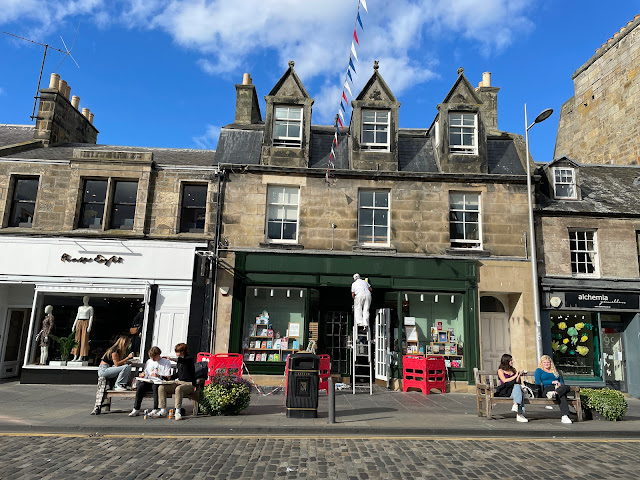 Town getting a last minute spruce up ahead of tomorrows events. Mr.Tulloch the painter applying a final coat to the bookstore woodwork. He'll go down and put the finishing touches on the new Japanese-Korean cafe later. I pause to tell him that the 'Wee House' in town could benefit from a visit. ' Aye. I'll get round to it when I can. Maybe before Christmas ' he says with an imprecision that would be recognizable to any French tradesman.   First year students already out and about and enjoying a bacon roll from Starbucks washed down with a can of Red Bull. The youngsters are at that stage where they can sit out all night shooting the breeze and pretending to ignore the single digit temperatures. The novelty of being allowed to do whatever they want, whenever they want to do it, still fresh. 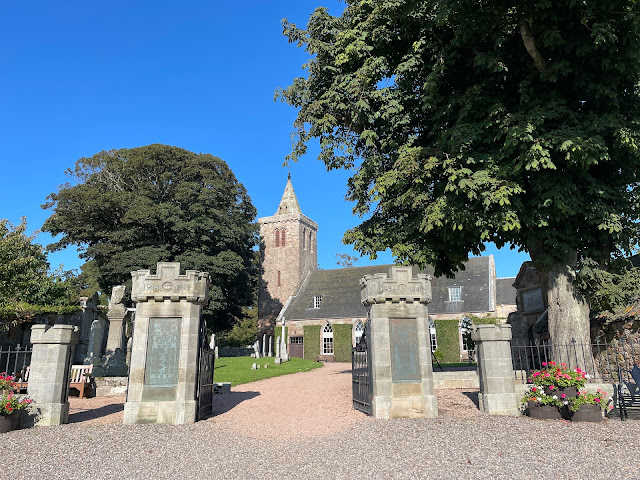 What a review ! This hotel is in the little fishing village and costs £25 a night ( if the brochure sellotaped to the window can be believed ) breakfast included. We wandered by yesterday. Having read the review the pricing is perhaps somewhere between realistic and sensible :https://www.tripadvisor.co.nz/Hotel_Review-g551745-d1523687-Reviews-Marine_Hotel-Crail_Fife_Scotland.html#REVIEWS

Sophie really does look happy in all of your recent pictures. Not that she didn't look happy in France, but there does seem to be something different. Today is a good day for Charlie - pelting rains in Tokyo thanks to a typhoon approaching from the south. The sun came out for ten minutes or so mid-afternoon, and we made a dash outside, where he found the puddles and wet grass irresistible. The reports say the storm will come closest to Tokyo two days from now, so we have a ways to go.

Lisa - PONs are cold weather dogs - that coat really doesn't work when it gets above 30 degrees. All she needs now is for the rain and sleet season to settle in !

From even further north in Scotland, the environment described in the first paragraph feels remarkably familiar. Nobby's coat is not as thick as Bertie's was, and he might be reaching for a wooly jumper in a month or two.
Oh how well I remember that first term at university, and the joy of being able to do whatever I wanted, whenever I wanted!
Cheers, Gail

The Marine Hotel reviews were enjoyable. I knew I was going to be entertained after reading the first line in the first review. "My wife booked 3 nights here. That was our first mistake."
Sophie looks so happy. She was meant to live by the ocean.

Sounds wonderful, lacking the fur layers I feat the winters would be rough for me. You and yours seem to find happiness where you are, happiness is what you make of things,

Thanks for the otters this morning!