How to wear the kilt. 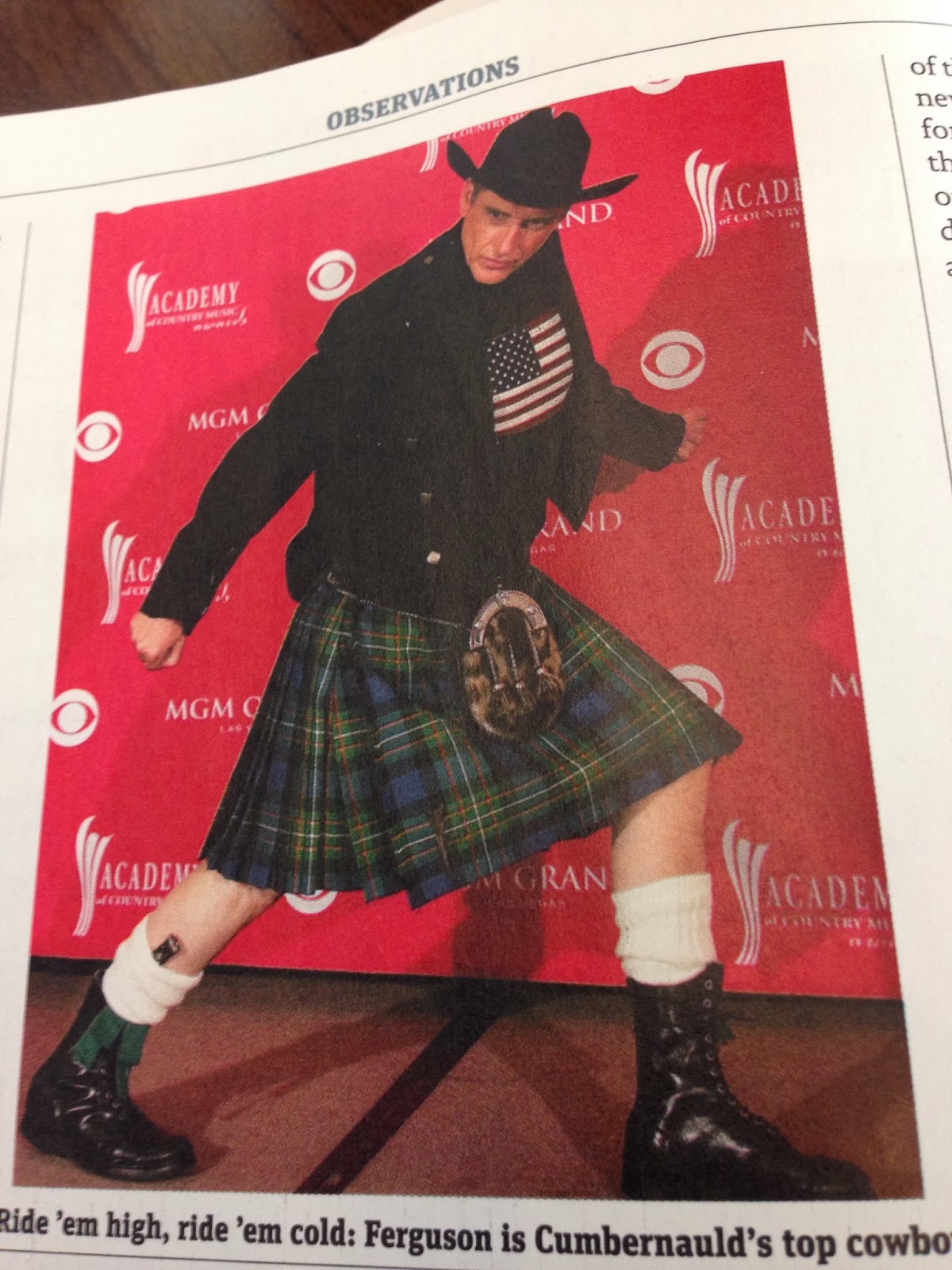 Off to London. A room full of identical men in dark suits. A very dull, humourless, masculine, affair. " Angus. Mind if we conference you through to New York ? " says the most senior ; a tall American with slicked back hair, marble sized gold cufflinks and a suit that fits just a tad too snuggly to be entirely gentlemanly. Angus briefly toys with the idea of saying he does mind about being conferenced but the man is already shouting '' yellow ! - yellow !! with ever increasing fervour into a video phone. There is no hello in reply as the  video phone remains resolutely dead.

At the airport lounge a magazine with a photograph of a man in a kilt . Something to do with the Academy of Country Music awards in Las Vegas. The man is wearing his kilt flashes in his boots, not his socks. A sartorial innovation too far ? Perhaps this video should be viewed by all those who feel the need to wear the kilt outside its natural habitat - the Highlands. 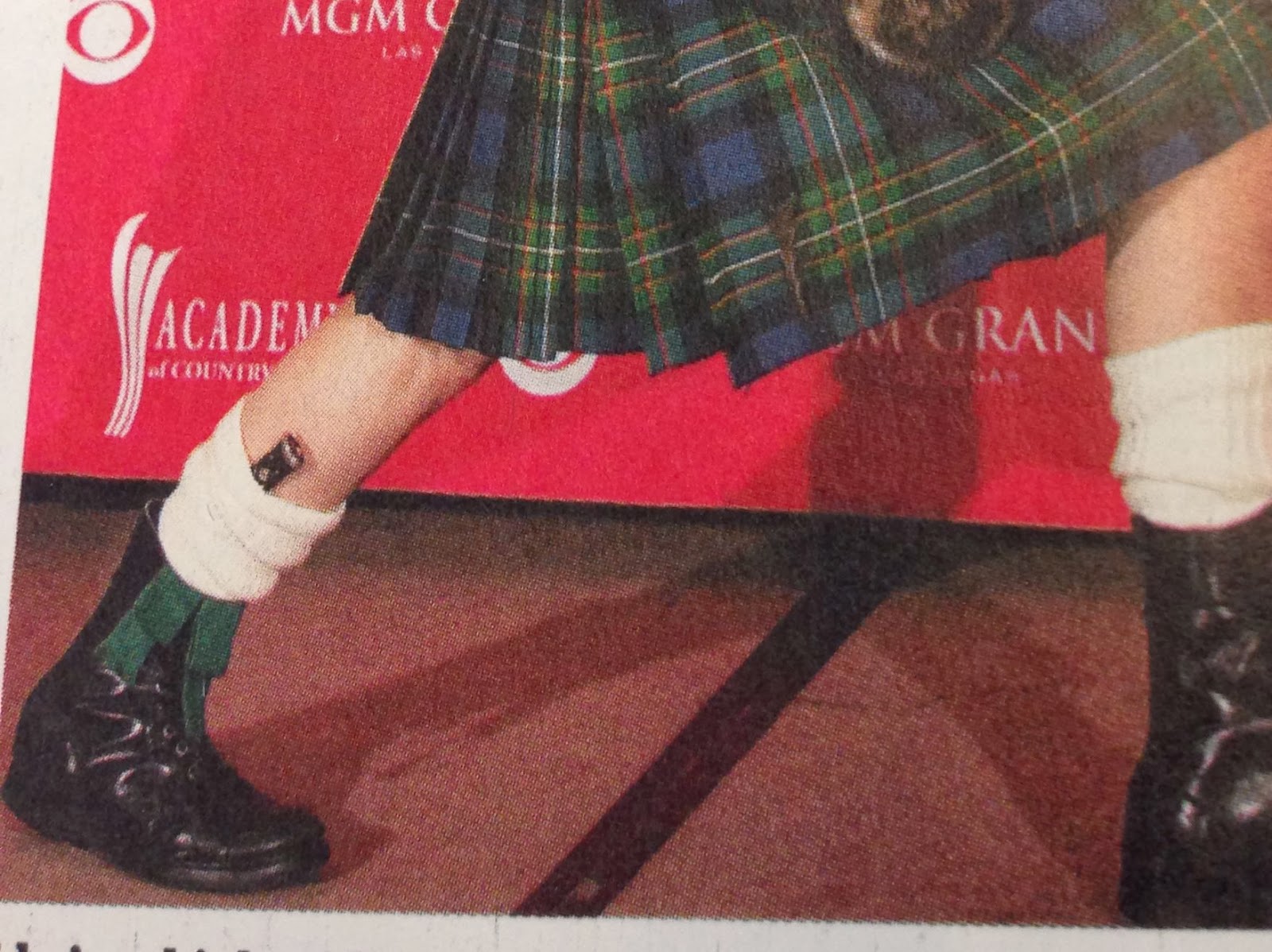 Ten minutes well spent if the alternative is the 'elegance' displayed in the magazine photograph !

Looks like a mix of cultures gone wrong......very wrong.

Kilts and cowboy hats were never meant to be worn at the same time.
The wearer looks like one of those male Barbie dolls whose owner has muddled up the outfits!

I feel I ought to be lusting after some gorgeous male model in a kilt and telling you that you've misunderstood the point of the advert Angus, but I can't.
I agree with Bella and Roxy, the mix just doesn't work at all, very disappointing really. Big sigh !

This past Saturday we attended the annual Scottish Festival and HIghland Games here in Fort Lauderdale. Needles to say I saw some very odd combinations, but lacked the true knowledge base to identify the most outrageous sins. May I ask what clan you are? We toured the many clan booths and could not help but wonder.

the wearer is Craig Ferguson - late night television show host. he's actually Scottish born - would would presume he knows how to wear a kilt...

How wonderful to have been at the Lauderdale Games. I'm sure there were lots of MacDonalds and lots of sights !

It's the flashes in the boots that attracted my attention !

This might be just to look for you to don at your next meeting of Men In Dark Suits...just a thought...

I've just been looking at photos of dogs arriving at this years Crufts, there's a hilarious picture of a PON arriving, in the rain, with a raincoat and red booties on, so funny. Ever thought of getting booties for Bob and Sophie ? Red ones ?

I thought that might be Craig Ferguson. Never seen the knife stuck in the sock before! The Queen's Own Cameron Highlanders of Canada used to come and march in our summer parade . We loved them all!

Mixing country music and Las Vegas is a seriously bad idea anyway.
Believe it or not, I saw a man sporting a kilt at the grocery store the other day.
He was wearing it all ways of wrong and I found it deeply disturbing.

Was it a grocery store near the Stone Mountain Highland Games? I got lost going there once and ended up asking for directions in Mary's Bar in Dacula . They haven't seen many men in kilts.

I once met a boatbuilder who'd named his boat "Sgian Dubh"; he was from Nova Scotia.

Ah, the Men in Dark Suits -- I do so enjoy these little snippets.

i don't know why...
but when you go off with the men in dark suits... i'm always uneasy.
i know you're a bit strong scotsman... and you go to help them figure their way out of their little boxes.
but they seem evil to me! LOLOL.
glad when you return.

Every summer we have the Capital District (NY) Scottish Games at a local fairground. I may have to attend this year...

And there we have it!!! I enjoyed the video and learned quite a bit in the process.
A photo of your full kilt regalia would be nice Angus....I'm sure you wear it well.

At least he wore no pouches on the side like the new utility kilts. We have lots of kilt wearers in the states,check out the X marks the scot website.

I don't think there are too many things more handsome than a man in a kilt, although I don't think I like the cowboy version. o.0 That video was actually pretty interesting!

What was your Ukrainian advice?

Herr Steinmeier ( like his former SPD government colleague Herr Schroder ) is an ardent Russophile. From this simple fact everything else follows. Heavy on words short on action. Whether this makes Mr.Sikorski, Polands Foreign Minister, happy is another matter.

Sadly, no Highland Games defense for this chap.
Just his sartorial choice for grocery shopping.