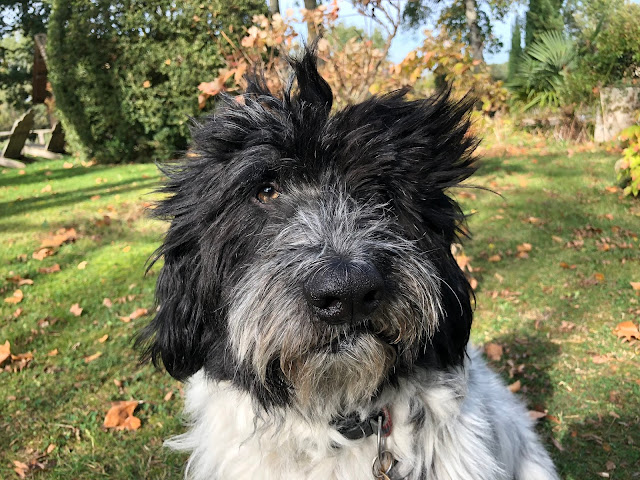 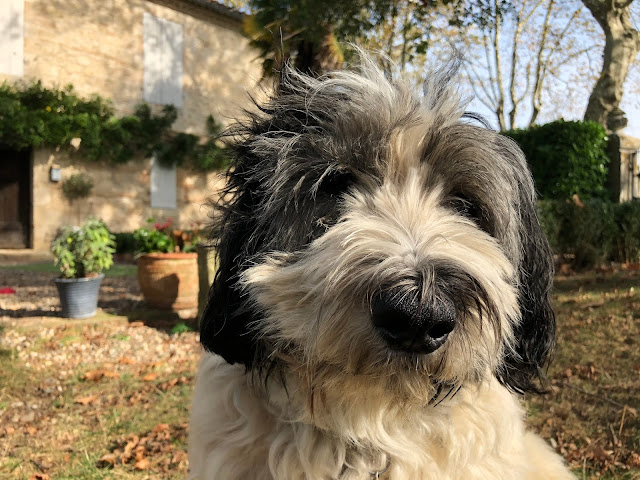 Sophie's appearance has definitely been improved by her haircut. Sophie adores being groomed. A first for any PON we've had. She trots off with her head high as if to say ' the styles a bit Hollywood but I think I can carry it off' . 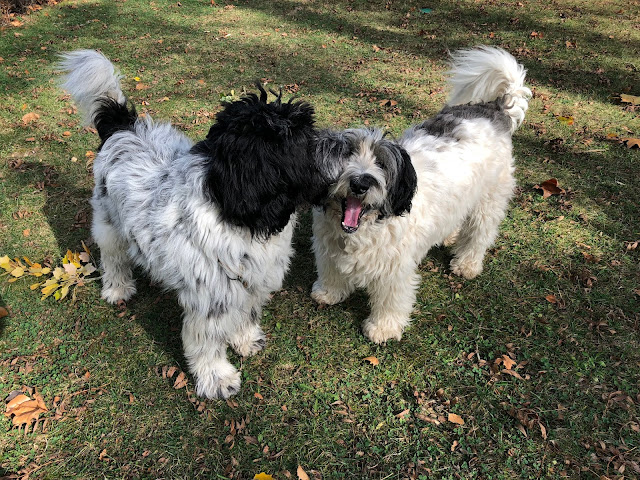 Bob plants a kiss on his sisters cheek. A daily ritual that Sophie bears with relatively good grace. 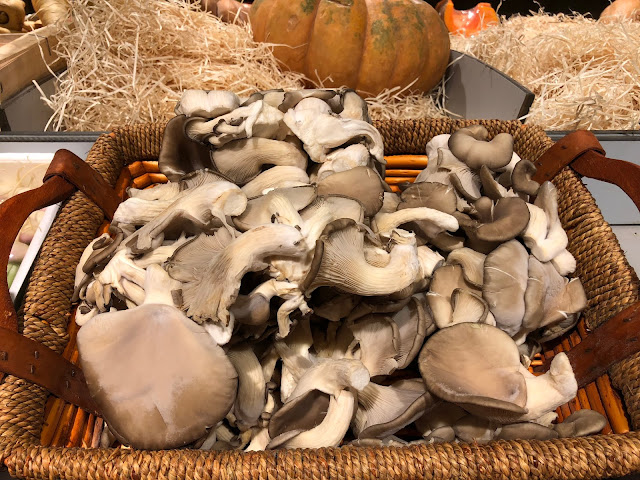 After a slow walk to the ridge we head off in the car and buy some chanterelles for a lunchtime risotto.

It's the school holidays so the PONs will spend their day racing backwards and forwards barking at the the eight year old tike doing wheelies on his pedal bike over the speed bumps. He's discovered if he goes 'woof woof' at the dogs they go 'woof woof' back.

A French village day when little if anything happens

Sophie could surely carry off ANY hairstyle. But I'm wondering why your chanterelles are not the same colour as the (golden yellow) ones I find in the birch grove behind my Torridon cottage.
Cheers! Gail.

The mushrooms in the picture are oyster mushrooms Pleurotus ostreatus (Fr. pleurotes).

This is perhaps why Angus shouldn't be allowed put alone to do the shopping !

Perhaps the tike on the bike gives Angus a reprieve from long sessions of throwing the furry fox?

Throwing the Furry Fox is quieter. Having said that after a day of barking at the tike and his brother the PONs sleep from 9 til 6.30. A guardians job is never done !

Hari OM
Little happening, perhaps, but no less enjoyable for that! YAM xx

I'm struck by how unusual Bob's black head is as shown in that kissing photo; we usually see him front on. It's as though he's wearing a black hood. Thanks for the video link, which I watched more than once and giggled each time.

Interesting comment. Bobs fur just isn't black but an intense jet black that's quite remarkable. It's difficult to photograph him as the camera on the i-Phone can't find a place to focus on.

Your title and that first picture of Bob scrolled up on my screen, and I thought, "Uh-oh, they've learned something new." Glad it's not the Dynamic Duo doing wheelies.
Sophie's new 'do looks quite chic. It's nice to see their eyes.

Beautiful photos with the new iPhone!

In Perugia for lunch today, thinking of you, Bob and Sophie. Sophie is looking very chic. I thought of her also as I was having my hair cut.

I’m always struck by what beautiful eyes Bob has and a certain gentleness they seem to express.

The accrued knowledge of PONs.

I wouldn't put it past them.

Lovely photo of the duo kissing. Sophie looks quite happy to be on the receiving end.