A blustery but mild start to the day. Sophie stands in the courtyard and waits impatiently for Angus to join her. A new week of adventure and excitement beckons. There may be Jaffa Cakes. 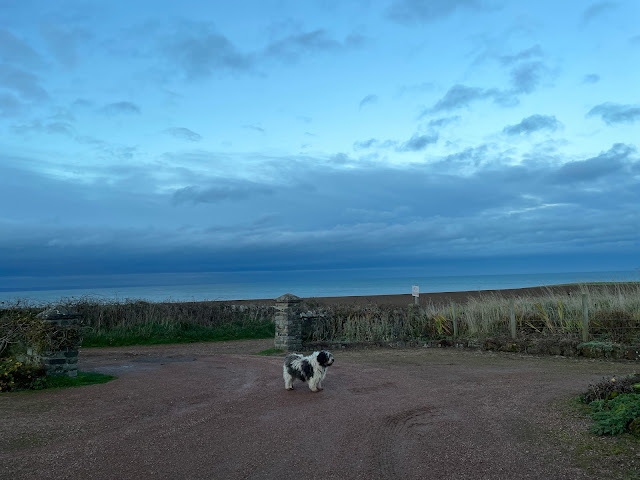 In the summer dawn comes early here in the North. Now we're heading to the winter solstice the pre-dawn darkness lingers until it's turned seven. We head out onto the farm track and then up over the hill before turning back down to the shore. Cormorants, seals, the village pig and the coterie of Jack Russells led by Doreen are all glared at. 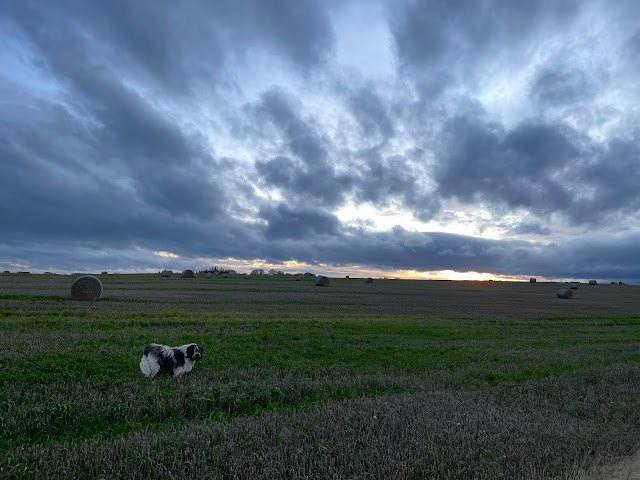 There's still a large puddle in front of the good coffee cafe. The weekend rain has overwhelmed the old drainage system in the heart of town. 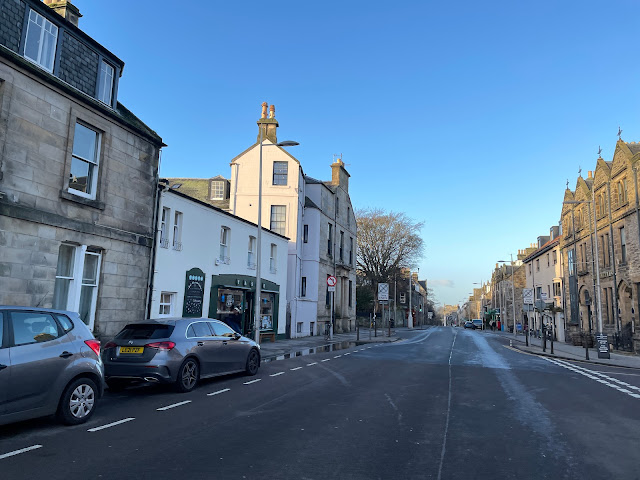 Margaret Atwood will be speaking at a winter graduation ceremony on Wednesday morning.  Joan Armatrading is also in town to receive an honorary degree. Angus has to pop down to London for a few days but 'The Font' will go to hear both of them. Will Joan Armatrading sing ? One of the reasons we chose to come to this wind blown corner of Scotland is the variety of people who wander through. This is a town where 'something' is always happening. 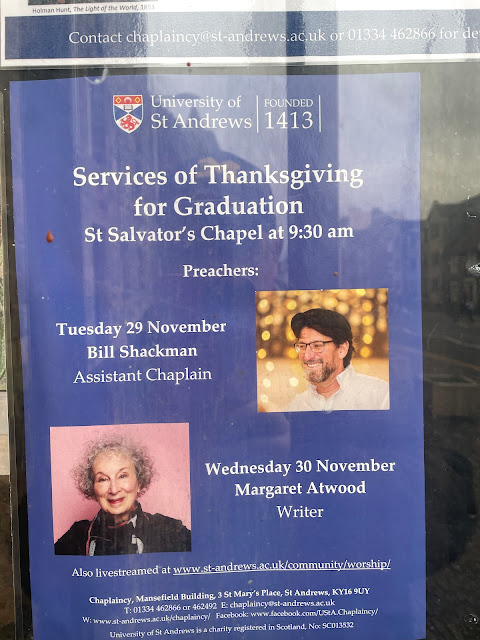 At the supermarket I look for Tattie Scones. They seem to have sold out but there are  Potato Farls . Angus has never heard of a Potato Farl. It sounds like something out of Anglo-Saxon England - The Beowulf breakfast of Ox, Hog and Farls. 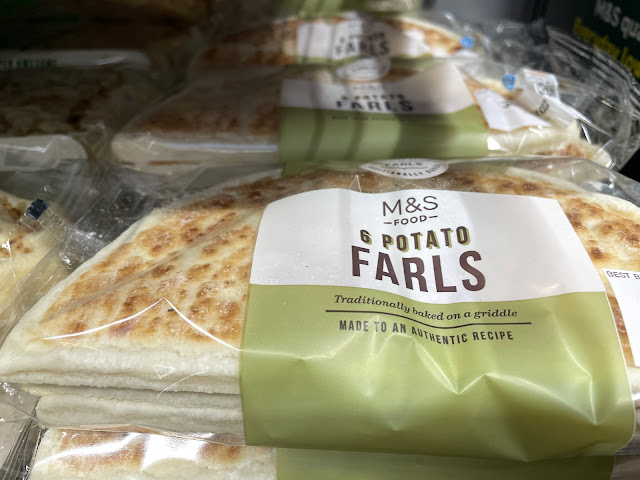 A kind lady wanders into the storeroom and finds the Potato Scones. The Farls are returned. 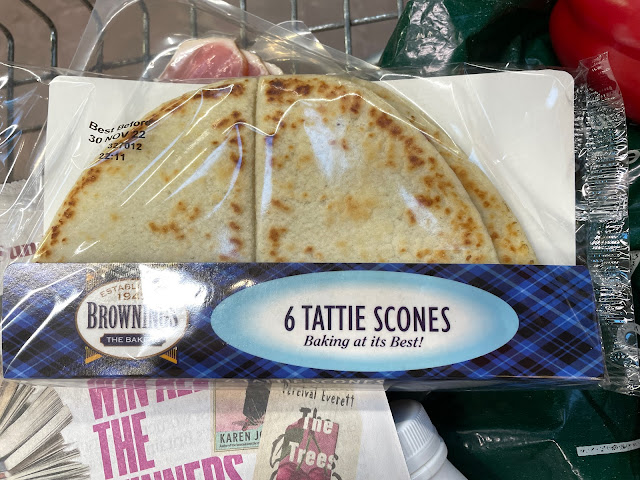 The supermarket has installed new self service check out systems. With the new system you put the groceries on the right and the empty bag on the left. This is the exact opposite of the previous system. Lights flash and alarm bells ring. Angus is ever so slightly irritated by this and wonders if this is change for changes sake -  another sign that somewhere along the way I've turned into my father.  A forest of Ponsettias have made an appearance in the aisles between the Prosecco and the wrapping paper. There can be no doubting  that Christmas is almost upon us. 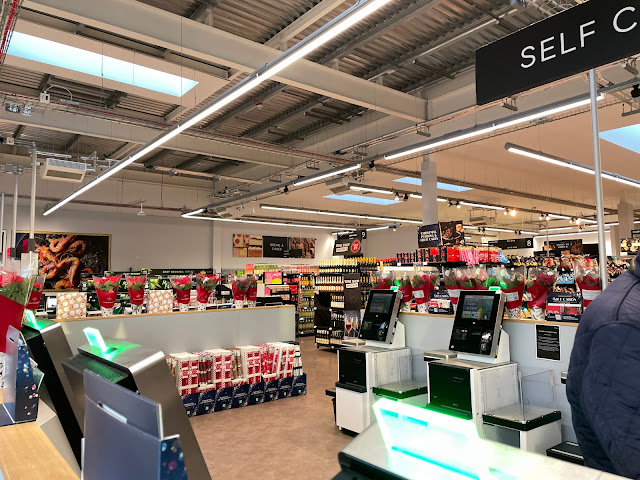 Very 1980's. This is the only Joan Armatrading song I remember :https://youtu.be/CEIZv1FzLhM

The new ones are better because it’s not measured by weight, so you can move your bags. Installed in Inverurie about a month ago.

Do you really not remember “Love and Affection”? Two of my heroines in the same week….Joy

Joan Armatrading and Margaret Atwood in one week - almost an embarrassment of riches, And yes, I too was thinking surely Angus knows 'Love and Affection'?
Cheers, Gail.

The weekend rain has left everywhere looking freshly washed.
Indeed, almost an embarrassment of riches with two Internationally known celebrities in the same week.
Self-checkouts are yet to make an appearance in the local supermarkets hereabouts, though i understand that they can be found in a couple of Hypermarkets half an hour or so away. I can remember using them in the States years ago, then finding that the machine would not accept our English cards. We had to root round for cash and just about made the right amount with a couple of cents to spare.

I avoid the self checkouts if i can. I am somewhat reassured having a bored university student swipe my groceries.

Our stores for several years have had the self check out system, and they keep adding them -- I try to opt to go to someone because I think it is sometimes just easier. But I have gotten really good at checking myself out given that stores in the county I live are now charging for plastic bags (.05 a bag) something that I know has been done away with in other countries -- I see that's true where you shop, not a grocery bag in sight.

The huge shrimp/prawn picture is a bit terrifying to me! I would love to see Margaret Atwood.
Wendy (Wales)

We are just starting to get the self-checkouts in Japan. I like them once I figure them out, but as you say, they all seem to be somewhat different and, I think, designed to make you feel like an idiot the first few times you try and use one. We are also being charged for plastic bags now, but the stores have not quite broken the practice of overpacking everything. Before you can put your purchases into your own eco carry bag, they've slipped a foam sleeve over every bottle, packed the fish into little plastic bags even though it is already packed in a foam tray and cling wrap, and so on and so on. I remember being shocked by all of this when I first moved here, but it seems it's a habit that's hard to break.

I seem to always have something go wrong or confuse me at self checkout. For that reason and because I want cashiers to stay employed, I use regular checkout. The miniTarget here now always has one cashier at a register, six self checkouts. They didn’t used to, probably realized cashier checkout is something to keep.

How wonderful to live in a beautiful small village where something is often happening! Yes. "Love and Affection" - what a great! It's a good thing that Sophie doesn't have to contend with those small but lethal cats on your morning walks!

Golly, definitely lethal cats, and yet they look so appealing.

I go to a supermarket that provides employment for some 'special needs' people, and I support them for that reason. In New Zealand single use bags are illegal, and over wrapping frowned upon. Im surprised how quickly we've become accustomed to bringing our own bags, and choosing paper over plastic. Of course there are still people blithely unaware of recycling and reusing, but it is slowly becoming better. CHildren will lead the way. I taught at a school where plastic wrap (I think Americans call it Sarun wrap?) was outlawed, and all lunchboxes used reusable containers for things like yoghurt. Also refillable water bottles and NO juice allowed. The kids got fully behind it.

I see Virginia has already commented on the NZ shopping experience - and I avoid self-checkout whenever I can and mainly shop online, but I do want to say that I went to Joan Armatrading and thoroughly enjoyed the show - I didn't know all the songs but she has an amazing voice :) Margaret A would also be fascinating.

Loving the beautiful photos of Scotland, particularly Sophie enjoying real weather for Pons - so much better than 40C days. Hopefully, your own weather-protective clothing is working :)

While I miss the village life stories from the Rickety Old Farmhouse, (and hope things are all working out for them), you do seem to have returned to Scotland during some exciting events.