We have been taught to believe that negative equals realistic and positive equals unrealistic. 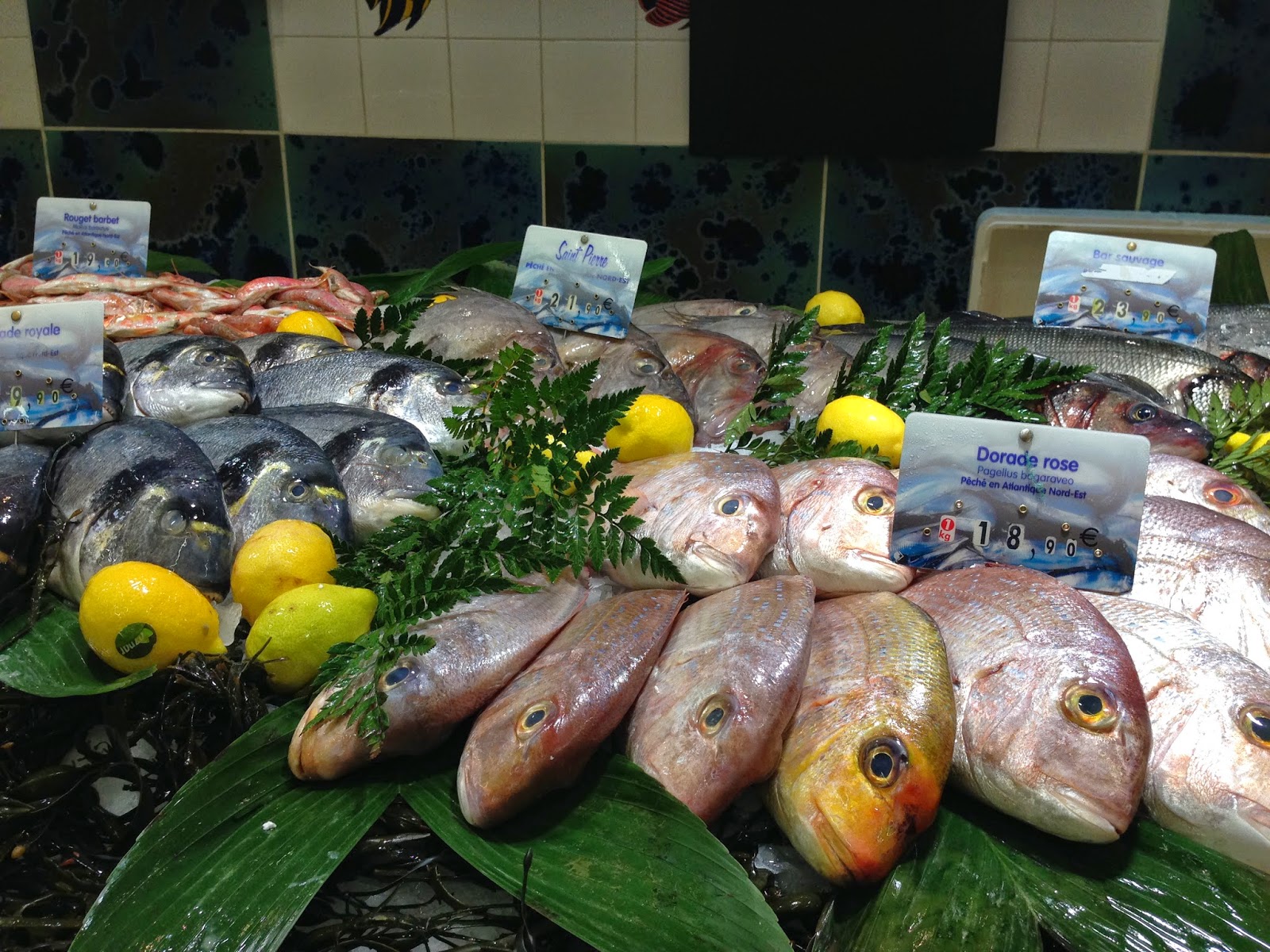 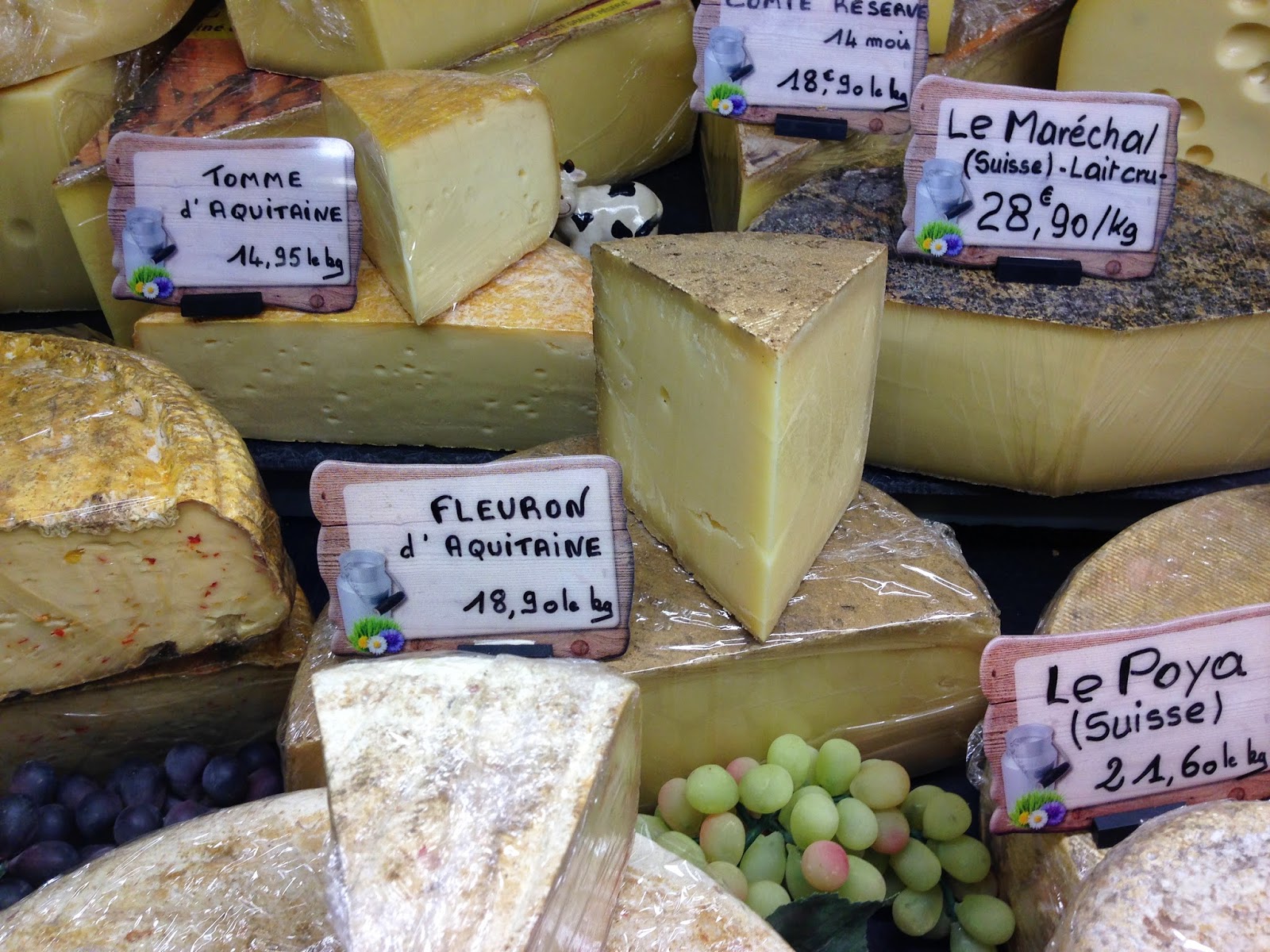 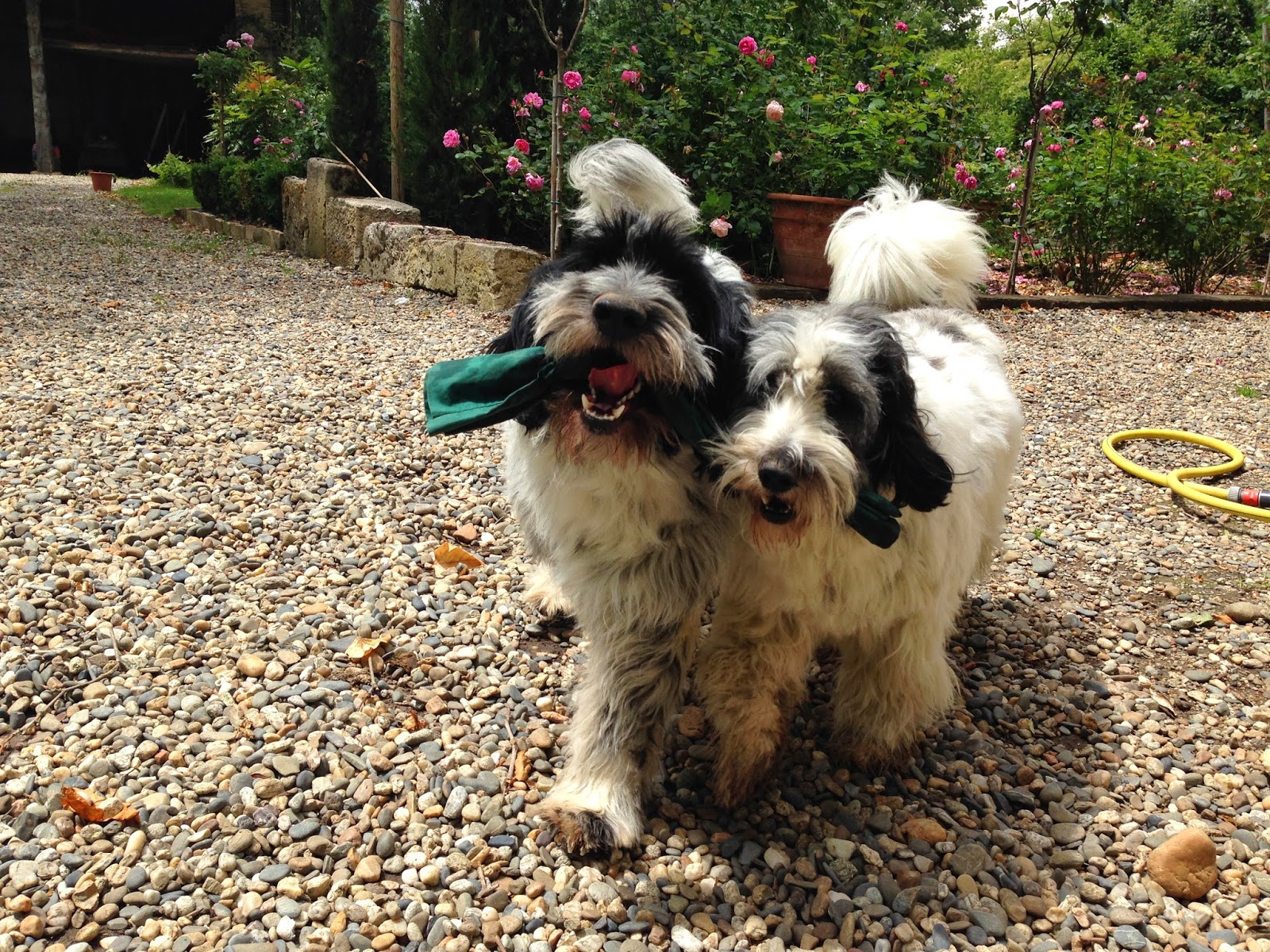 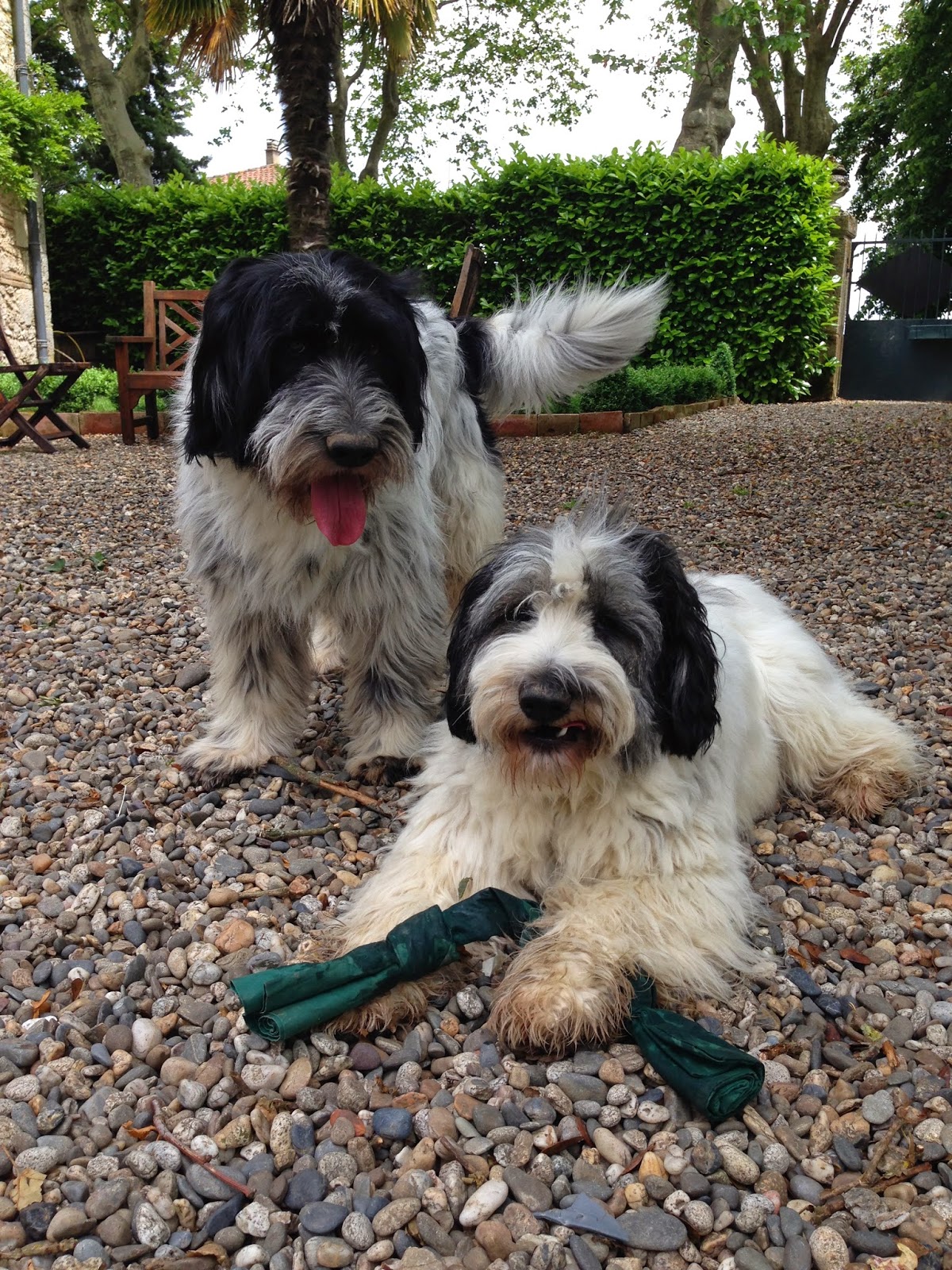 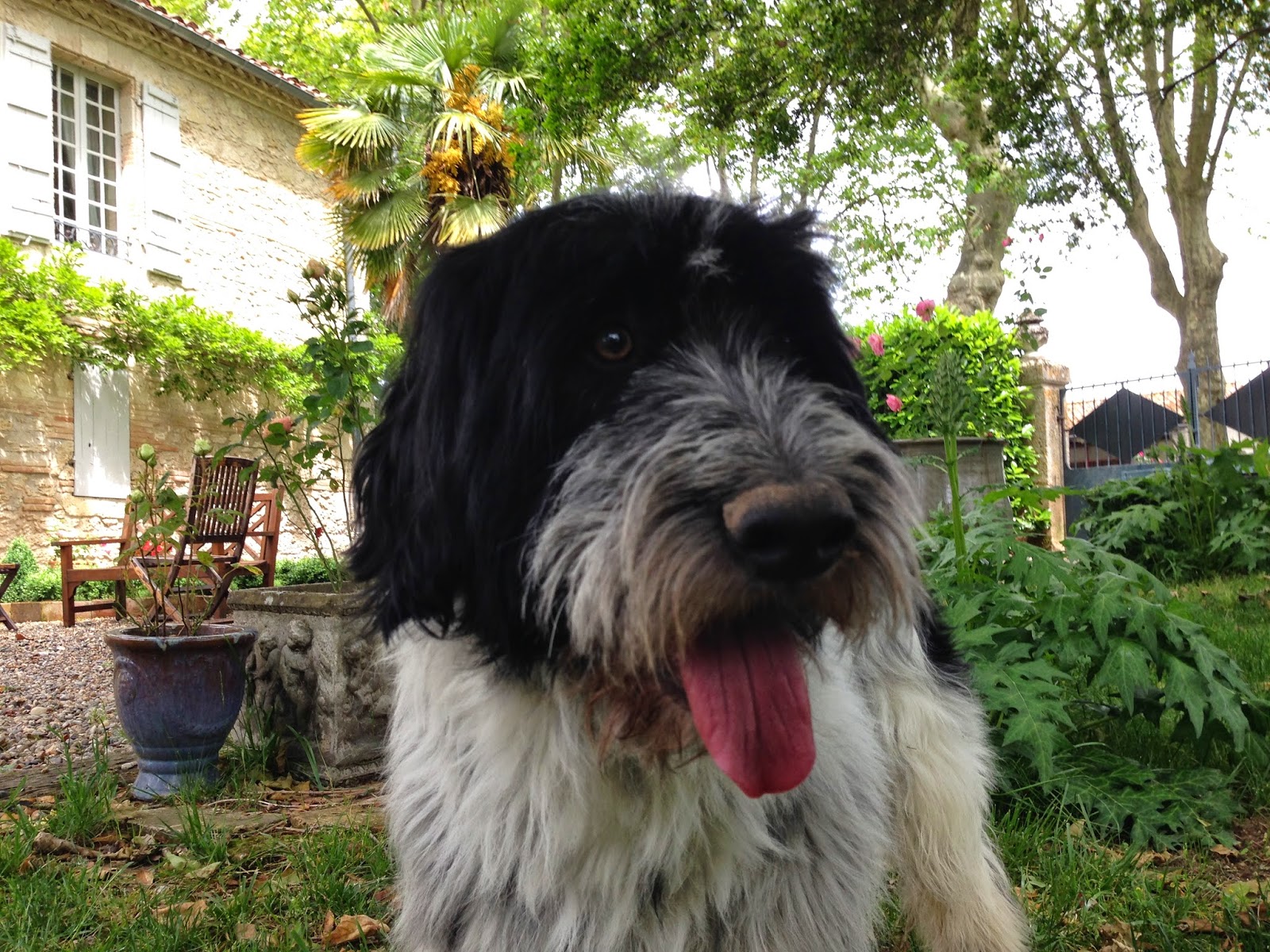 A visit to the cheese lady. This morning we're adventurous. Some Fleuron d'Aquitaine and a Swiss cheese, Le Poya. Each harder in texture and saltier than our usual choices. Bob and Sophie have no problem with the taste or the texture - both meet with their approval. Bob stares at the cheese lady in the hope that she might give him the large piece of cheese on the counter rather than the tiny sliver that's proffered.

At the fishmonger a fresh delivery. We opt for a large Saint Pierre. There's Limande on the counter but it's certainly not Sole Limande which we think, but no one seems to know, is the French for Lemon Sole. Perhaps it's a fish you only find in Scotland ? What is it called in the US ? Flounder ?

Rather than throw it out, 'the font' has had the Idahoans old bed linen laundered and posted back from London. Pillow cases, knotted at either end, are perfect for tug of war. They're supposed to be played with indoors but they're quickly dragged out into the garden.

It would be an interesting challenge to find a cheese that Bob and Sophie would refuse. (Hamish once turned his back on an exceptionally over-ripe Brie.)
Cheers, Gail.

In the third photo. Bob looks like he's sporting a topknot!

We don't have much of a variety of cheese way out here......

I enjoy the mild and tender white fillet of fresh flounder, and so I did a quick look-up on them, and the site I found said that in the US, there is "no true sole only flounders and lemon sole is one of the names given to winter flounder." Somehow, that makes sense, just like Bob and Sophie taking their bed linens outside for a game of tug of war!

The "Font" is such a practical woman....no wonder you chose her as your life mate....you did well Angus...you did well....what a lady...I do admire her.
Thanks to dear Mummy Font, Bob and Sophie now have a year's supply of tug-o-war linens to pull apart....what joy!

That cheese looks delicious! And yes, I think it is called flounder.

A challenge that would take forever.... and then some.

That ever present, ever whirling tail !

Thank you. I shall do my best to find a fish restaurant in Annapolis that serves flounder. The chances of finding winter flounder ,I guess ,are minimal .

And our store of dog towels has been replenished thanks to the Idahoans.

Merci. Of course the problem is that asking for sole limande here in France elicits a blank stare.

All sounds a bit fishy to me (ouch, sorry !)
I was just wondering when I last saw a proper fishmonger but at least there does seem to be plenty of cheeses to choose from here. You (and the PONs) are very lucky with all this fresh produce close at hand Angus

This left-eyed flatfish has both eyes on the left side of its body when viewed from above with the dorsal, or top fin, up.
The "eyed" side of this fish is scattered with 10 to 14 eye-like spots which blend in with the ocean floor.
Its belly or underside is white.

Summer flounder are found in estuarine and coastal waters from Nova Scotia to Florida.
They are most abundant from Cape Cod, Massachusetts to Cape Fear, North Carolina.
Within Chesapeake Bay, summer flounder are largely restricted to waters south of Annapolis, but they can be found occasionally in the upper Bay.
These fish inhabit coastal and estuarine waters from spring to fall and move offshore to depths of 100 to 600 feet during the winter.
Their migration is presumably brought on by decreasing water temperatures and declining photoperiods in the fall.

You should have no problem finding flounder in Maryland....doubt you'll want to take it home, tho...