A judgement on cooking skills. 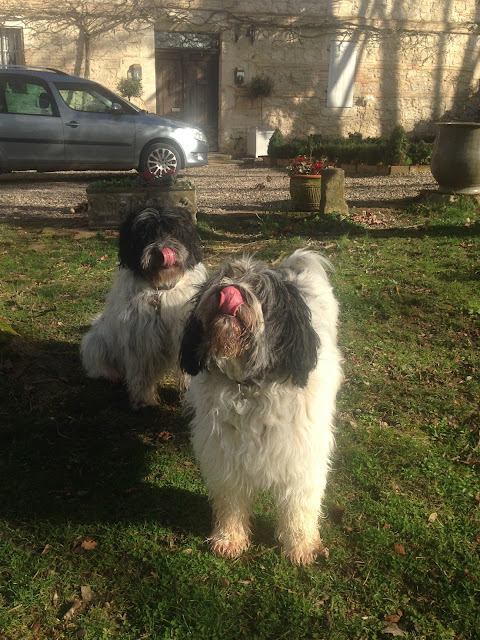 Difficult to say if this is synchronised nose cleaning or a comment on Angus's cooking skills.

Oh dear Angus, you had better go and buy some sausages...but what a wonderful photo !

Maybe they did synchronised nose pushing into something they shouldn't .....but that was very tasty!
Marvellous photo.

I watched the PON category at the Westminster dog show last night, and can't help thinking this would probably have warranted a demerit(how do they get them so clean and tidy, not to mention well-behaved?): http://www.westminsterkennelclub.org/videos/Breed%20Judging/2016/Herding/pid:fas2t9O3v_jK

Bob and Sophie, don't you know that sticking your tongue out at the camera is Rude!
Toodle pip!
Bertie (who is really just jealous, being not so well endowed in the tongue department).

How funny....maybe it can become an event at Westminster.

Looking at those fluffy, pristine looking PONs all I can imagine is that their owners live where there's no mud and are hard at work grooming 24/7

For Sophie everything is tasty !

Now you know. We have Gorbals PONs.

The judges wouldn't be pleased.

I watched the PON judging video too, and I must say I prefer the down to earth look of Bob and Sophie.
Now as for those tongues, I think they may be trying to tell you a whole lot more.
"Quick, Dad is coming, lick your nose quick before he sees that we've been digging in the seeds again!"
But then again if they just ate a piece of one of your infamous bacon sandwiches, that would definitely be the reason for that incredible synchronised nose licking.

I much prefer the au naturelle look of the angelic duo!

I feel the same way about the show PONS versus our angelic duo. A touch of mud on the nose and paws. A bit of wind in the fur. A synchronized lick of the nose.

Many moons ago, I showed my Basset Hound in obedience trials through out the south east US. After much thought, I think synchronized nose cleaning should be an additional task in the obedience ring, rather than the show ring! I can picture a long line of PONS with their tongues on their nose, upon command!!!!!!!!

I don't think Show dogs are allowed out to mix with the common herd, are they?

They are slightly over groomed. Too much scissoring in the USA, they are sheepdogs afterall. Training and grooming takes time but it's manageable as long as the owner likes this. I just hope that one day judges will finally understand the breed enough to give it best in the group. At this point they don't respect their unique shape and look underneath the coat to do that. In any case, Bob and Sophie are perfect as they are, smart and funny just how we as PON lovers like :) Love reading about their adventures.