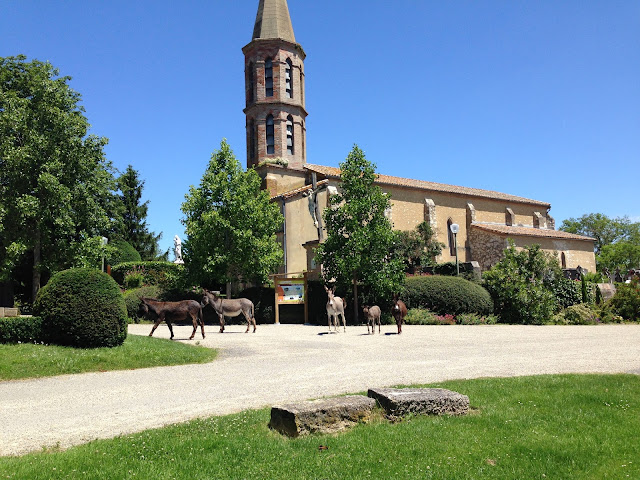 At the crossroads there is a barn with a corrugated metal roof. The barn is usually home to four donkeys, one grumpy male and three females. Two weeks ago one of the females gave birth. Now there are five donkeys. 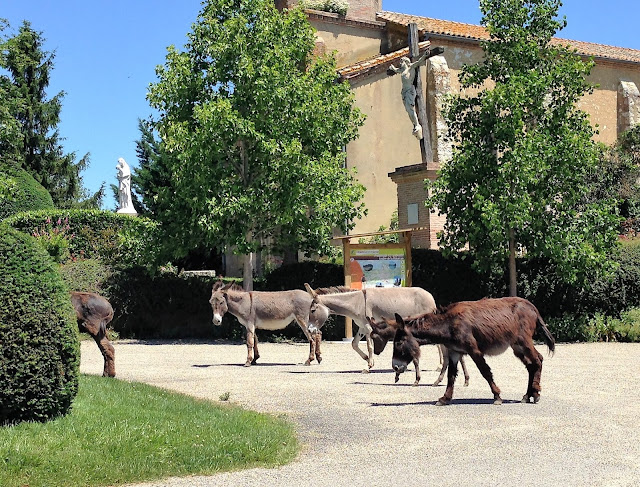 Today, the donkeys manage to open the barn door and make a break for freedom. I'm alerted to the fact that something unusual is going on by the PONs. Sophie is standing on her hind legs at the gate. Her high pitched squeak has modulated upwards by an octave. Bob, on the stump seat, with Furry Fox in his mouth , has been rendered speechless. 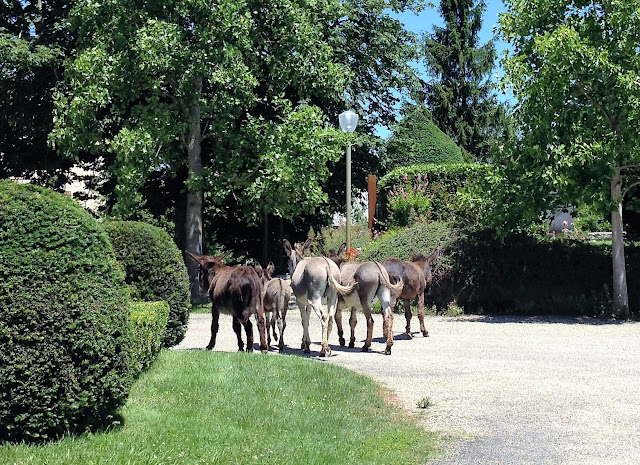 The donkeys amble down the lane. They eat the hydrangeas at the front gate before turning their attention to the Old Farmers hanging baskets. The dahlias in the flower beds in front of the church follow. Under the watchful eyes of the swaying Jesus the male makes short shrift of the rose bushes around the war memorial. 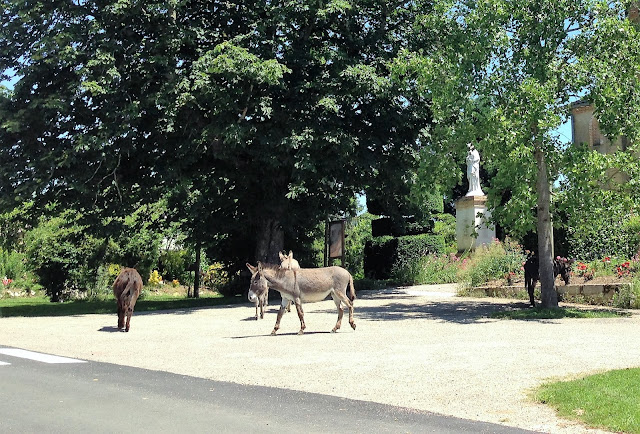 It's hot. The donkeys opt for a dip in the village pond.  The mayor is called. His donkey herding skills are limited. Other villagers become involved. Their donkey herding is also found wanting. The dip in the cool water rekindles the male donkeys amorous spirits. Shouts and whistles cannot deter him from what he has on his mind. At this point Angus decides he's done his civic duty and slips away. 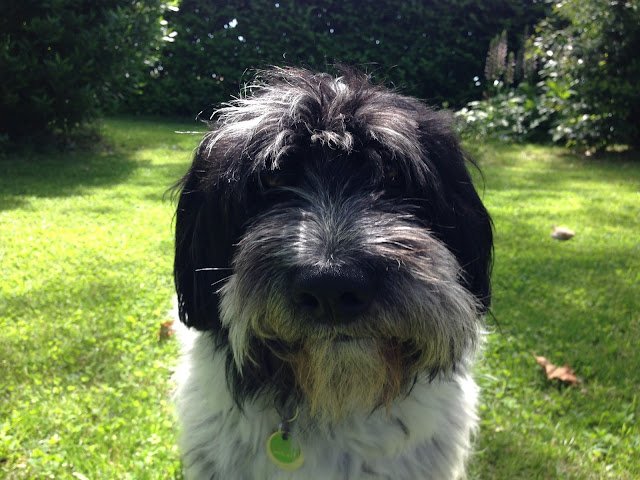 Bob is convinced that he alone has prevented the house and garden from being overrun by these strange creatures.

Sophie demonstrates how brave she is by keeping close to me while I clean the pool. 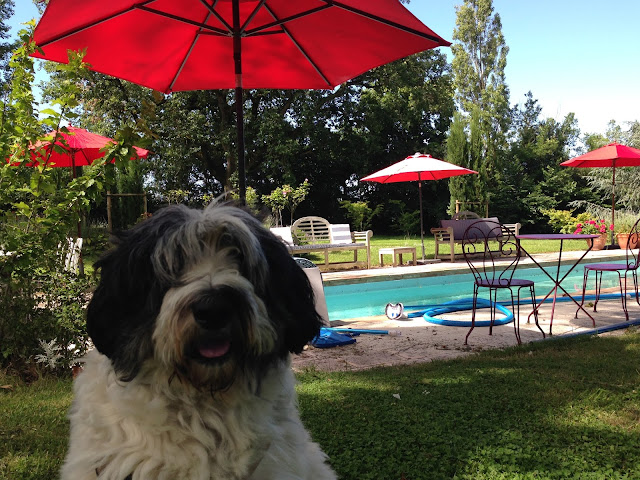 Man proposes, God disposes and donkeys do pretty much what they like.

A day in the life of a French village. Recorded here because some things are too unimportant for a diary but are too life affirming to go completely unrecorded.

I'm holding my breath til we hear the end of the saga - did they get caught before some loon driving too fast injured any of them? Or are they on the way to walk the Camino??

Donkey mayhem? Important enough to be recorded in any diary, I'd say!

Thank you for a hilarious start to the day, Angus, I can just picture those carefree donkeys chased by the inept herders...and the amorous donkey....ooh la,la - c'est la vie !!

What excitement! Furry Fox would have been dropped here...nothing gets in the way of a good bark.

What an exciting day in deepest France profonde...I hope the owner soon showed up to put the donkeys back in the barn....although I do think Bob and Sophie would have done a good job at herding them back in too.

I am laughing out loud. Your village sounds a whole lot livelier than mine.

Now that is what I call an exciting day!!! Hopefully the pack was herded back to the barn and the roses and hydrangeas are but a distant memory....

It's too bad no one in the village has any herding dogs...

Greetings from sunny Alaska! I left the blog world for Facebook but "check in" on the PONs from time to time. Glad to see you are all well. Cheers!!
Ina in Alaska

They do look rather pleased with themselves. All those exotic tasty treats. I hope they were safely rounded up eventually.
Good boy, for protecting your territory Bob.
x

Great to hear from you. You are missed ! Whatever happened to the old Jaguar in your neighbours yard ?

A posse of pre-teen boys on bikes making whooping noises finally got them to turn round and head home. They had gone through the village, as far as the old widows cottage at the far end, devouring every window box in sight !

Now they know there's juicy succulents to ne had outside the barn they will be scheming up fresh escape plans !

Our 67 souls inhabit a universe that time forgot.

The thought of Bob and Sophie herding donkeys has made my day.

The noise of an amorous donkey is a wonder to hear !

Bob prefers to guard with a soft toy in his mouth. Somewhere he's got it into his mind that this makes him look frightening !

Mayhem just about sums it up.

I can only imagine.

The swaying Jesus may have averted his gaze for at least part of the donkeys' antics.

Can you imagine what the frogs thought, when their village pond was invaded! Love the picture of them walking side by side down the road!

The Jaguar was towed away to an unknown fate. I am so sorry I never contacted the owners, although the folks living in the Jag House were tenants. The house is now for sale. It is in terrible disrepair.