Where did the day go ? 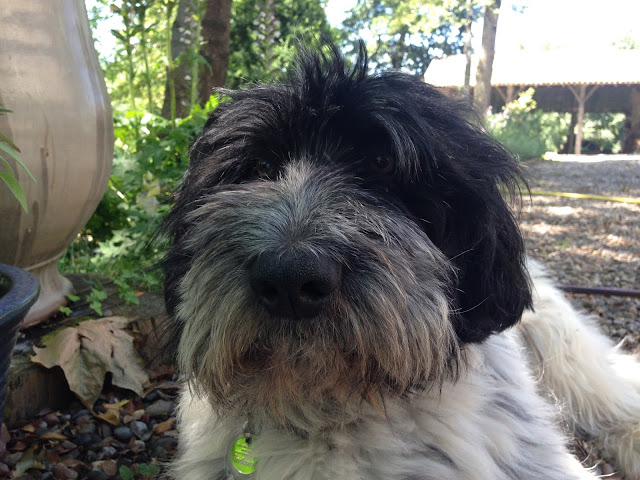 'The Font' has been nagging me to go to the Prefecture and apply for a Residency Permit. Angus believes in the healing powers of procrastination but last weeks events give this chore an added urgency.  Bob and Sophie get walked at seven and I'm in the car and on the motorway by eight. 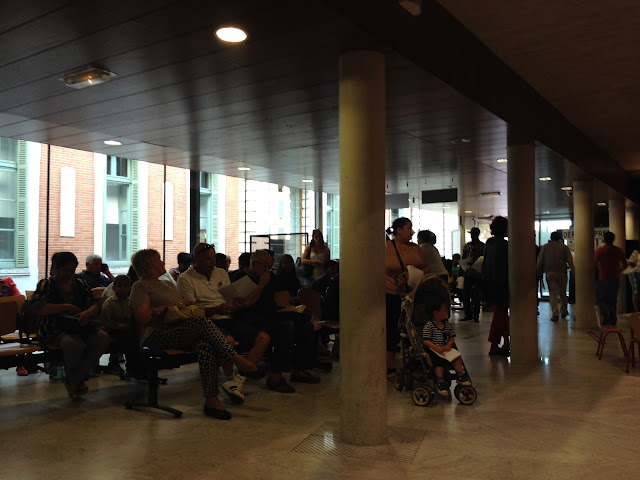 By ten to nine the lobby is already full with people waiting for driving licences, insurance forms  and all those pieces of paper needed in modern life. Residency Permits are in the same department as asylum seekers. I get ticket number 423. The digital sign at the reception shows that applicant 401 is being seen to. 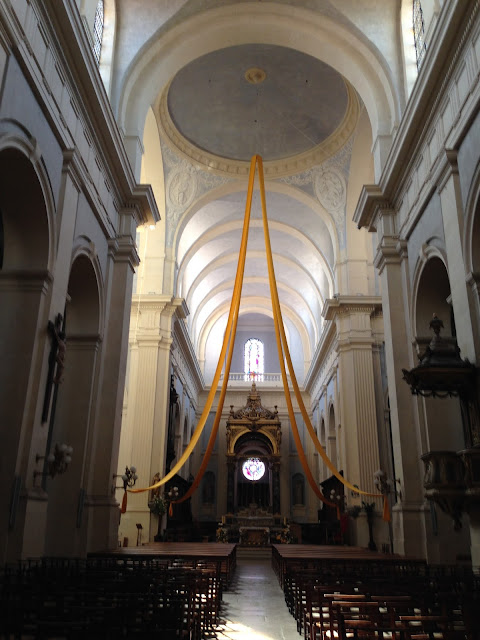 Off across the road for a coffee. When I return the queue has progressed as far as 404. Time enough to go sightseeing. In the peculiarly ugly cathedral yellow ribbons have been strung from the dome. No one seems to know why.

To the book store. I buy a book on local history. The man behind the counter tells me I've made a commendable effort at speaking French with the local accent. Angus takes this as a compliment but it could just as well be waspish humour. 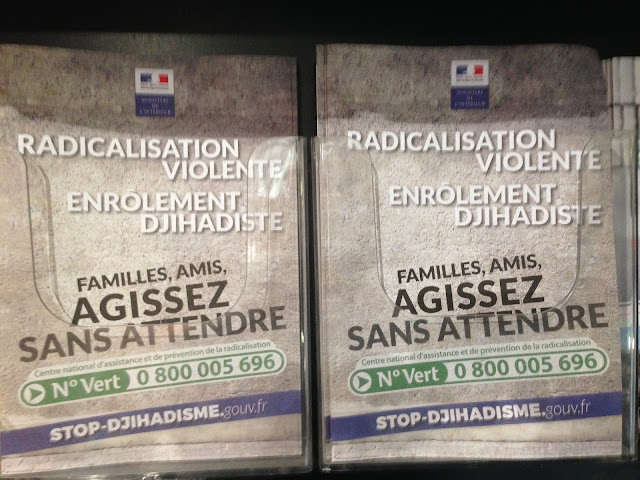 Back to the Prefecture. They're now seeing applicant 411. Five chapters of the local history book gets me through to 418. An attractive young lady hands out leaflets advising families on how to recognize Jihadists. Angus being an unlikely looking Jihadist isn't offered one.

Finally, it's the turn of 423. 'The Font' had warned me to be prepared for a frosty reception from the ice maiden behind the counter - a doughty lady with a bun and an orange knitted cardigan who greets applicants with unsmiling formality. ''Why do you want asylum ? " she asks. I explain that I don't. A residency permit would suit me just fine. '' Don't you believe it. You English will all be asking for asylum soon ". With that she laughs, says the referendum shows the English are mad, gives me a pile of forms, tells me what to do ( this is done slowly with the words '' are you sure you understand ? " repeated three times ) and makes an appointment for me to come back for an interview next week. She smiles again when I thank her with that particular effusiveness used by those who have had unexpectedly pleasant dealings with bureaucracy. 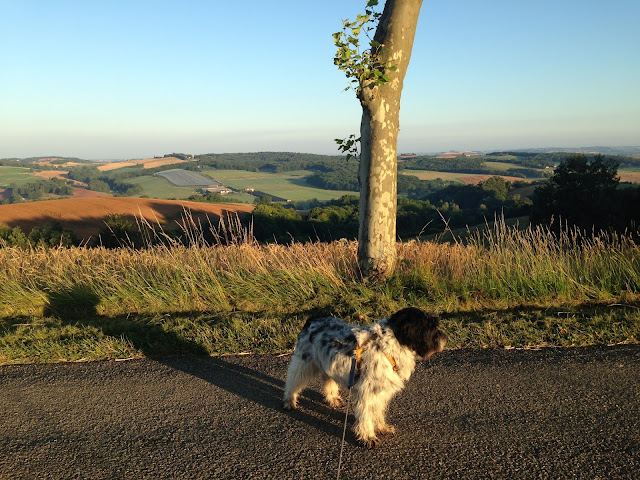 While Sophie and 'The Font' experiment with a new Bouillabaisse recipe in the kitchen Bob and Angus walk to the end of the ridge. We sit and watch the four adult donkeys and the young one eating the bark off a fallen oak tree.

We have had residency permits or "Residencias" as they are known in Spain, for about ten years. The first ones expired after five years, and we forgot to renew them, (a very simple process) so last year we finally got around to applying for new ones - these, supposedly, won't need renewing. It was fairly straightforward, just a photocopy of passport details and an up to date copy of our Padron. We also pay our taxes here too, now, so we don't know if that will stand us in good stead in the future. We'll see.
Aren't our canine companions lucky, they don't have to bother with bureaucracy or form filling and it doesn't matter where they are as long as they are loved, walked, fed and watered? Would that our own lives were so simple !

Was given a list of documents two pages long - Birth Certificate, Letter from Social Security to say I'm not drawing benefits, same regarding health system. proof of income, proof of health insurance, proof of house ownership etc, etc, etc. All of course to be translated by a court approved agency.

Me thinks that the lady in the orange cardigan may get busier in the coming months.

Are you 'jumping the gun'?

As an American, I had to get a residency permit. I just renewed it for a second 10 years, in fact. We had taken an appointment, so we didn't have to wait. I had a dossier about an inch thick, everything with two copies. The bureaucrat was stunned to leaf through, see everything was there, in duplicate. I guess that doesn't happen often. I got an email a couple of weeks later that my new card had arrived. However, that was not by appointment. It was just after an attack (was it the TGV?), and the line for security took an hour before I even got inside. Then I took a number and had to wait for three hours just to be handed my card (there was no going back out). It gave me ample time to observe others going in, then coming out with papers, waiting in line to use the photocopy machine, get to the machine and THEN fumble for coins. Turn to others in line to ask for correct change. No wonder the process is so slow.
Don't forget your facture EDF. That is the ultimate proof of everything in France!

Now that is indeed a good day. Better safe than... Besides what would deepest deepest France profonde do without you and the Font?

Oh no! We well remember what you went through obtaining your driving permit. Took something like four months if I remember correctly. Wonder what hoops you'll be jumping through this time.

A walk to the ridge overlooking Bob's World and a healthy serving of boillabaisse seem the perfect antidote to a morning of bureaucracy.

The longest journey starts with the first step.

Better safe than sorry. Particularly as tempers are rising.

The Fonts permit was slow - photos not clear enough (?), was the translator approved by the government , why was this Swedish passport issued in London not Stockholm etc etc. I'm hoping that my charm will win over the orange cardiganed lady and that the process will be smooth and efficient. 'The Font' is doubtful.

Yes, but when it comes to uncertainty why not ?

Best to charm her now !

Hope all goes well with the bureaucracy… One wonders why these forms aren't available on line. Incidentally, I just renewed my passport and, impressively, received it within 9 days of submitting the application. So my new British passport, also bearing the words 'European Union' arrived one day before the Brexit vote.
I bet the Bouillabaisse tasted good.
Cheers! Gail.

My passport is due for renewal in two years time, so I wonder what form it will take? Hard blue cover?

If it's 2 years it should still be an EU one.

On line would reduce the power of the bureaucracy and cut costs. This is France. Why would anyone want to do that ?

If you need a character reference, Mr. Mayor and Mme. Bay should do.
I'd like to think that somehow this mess could be reversed, but am not optimistic. Best apply now, The Font is right.

Angus,
Interesting the differences between départements. Like you, I procrastinated in requesting a Carte de Séjour. And, like you, I went to the préfecture here in the Loir et Cher yesterday. I was armed with all the documents I could imagine, and a few others as back-up. My wait (number 711) was about 75 minutes and I was helped by a well coiffed middle aged fonctionnaire. She was happy to take the copies of my passport, my American husband's Titre de Séjour, marriage certificate, and then supporting declarations of income - 5 year's worth - and health insurance in France.
All seemed to be fine, except the early documents supporting income didn't have enough detail, so I needed to post off the additional pages of the Avis d'Impôt. No other hassle
Now I will just await the review of my dossier. Perhaps, as a back-up, I will hope for Scotland to leave the UK, join the EU and I can then request a Scottish passport and be in good stead here in France.

Interesting your comments about health insurance. Is it an age thing, or based on country of origin? Here in Spain, we have excellent free health care, which presumably is granted on a reciprocal basis.