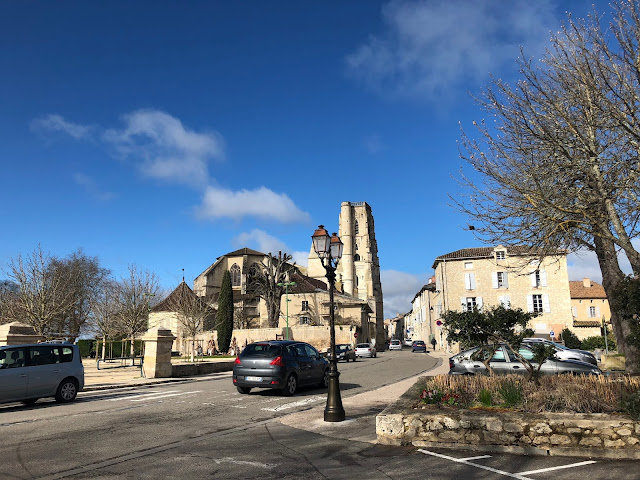 Cold but bright. We park by the Post Office and head off into town. The PONs detour via the bandstand. Bob christens it , Sophie runs up the stairs on one side and down the steps on the other. She repeats the process in reverse then yelps with delight. She's mistress of all she surveys. No doubting this is the best day ever. 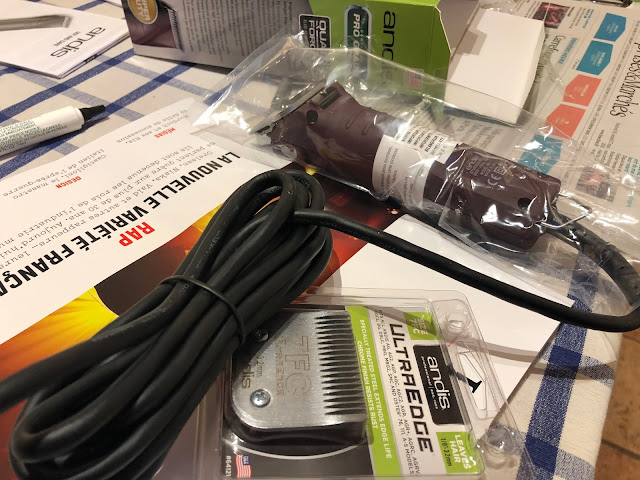 The new dog clippers arrive. Boy are they heavy. Probably double the weight of the battery operated ones. Lets hope they'll make an impression on Sophie's impermeable four inch thick coat. When this cold snap goes both PONs will have their summer cut. 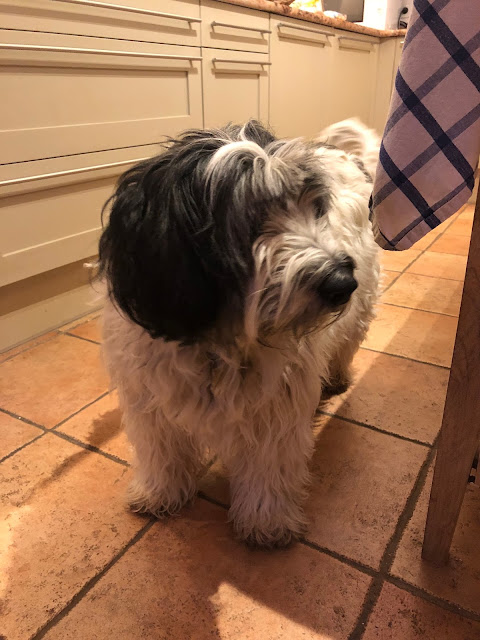 In the village the two tykes who so memorably 'played' their trombones at the recent village wedding are up early. The sound of the C scale being played over and over disturbs the Sunday morning calm.  Drums and acoustic guitars can't be far off. 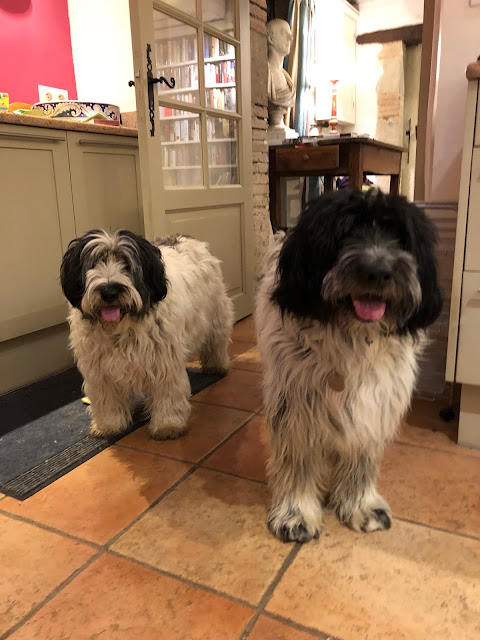 There was a shooting incident in a supermarket a couple of hours south of here. A gendarme volunteered to take the place of one of the female hostages. He was later killed. The priest that was due to marry him ended up giving him the last rites. A reminder that duty, honour and bravery exist.

The entire town is in shock and mourning over what happened. This is a small enough place that the degrees of separation are but one or two.

What a tragedy. I do hope France supports his family long term. Are the French good at doing that? Second question - I've been shaking my head over Sophie's interruption of the painting process ... did you try offering her a yoghurt pot - the magical kind that has PLENTY of scrapings in the bottom? Surely that would have moved/woken her ??

Hari OM
This was well reported on our news - dreadful.
That is indeed a fine photo.
Wonder if Sophie and Bob's will be as fine after the shearing...
YAM xx

He had a légion d'honneur, which means that there will be considerable support I believe, especially if he had children. I have a friend whose children are being educated in the very best schools thanks to scholarships connected to her father's légion d'honneur. By coincidence, she is also the owner of an English pointer who last time I was at her place was kept occupied by trying to get the last bits of paté out of a jar. Paté or terrine is even better than yoghurt. The dog had been at it all day because it's much more difficult to lick out.

Such a terrible tragedy in Trèbes. My heart goes out to all the victims.

Bertie is hiding under the kitchen table having just caught a glimpse of those fearsome looking clippers.

France has the concept of the state becoming the parent of orphans :
https://qz.com/561449/children-orphaned-by-the-paris-terror-attacks-will-be-adopted-by-the-french-state/

Inconceivable that such bravery can end in such tragedy.
Sophie is much more difficult to move - Inca, typical Lab, comes at the crackle of any bag, in the hope that it just might contain food !

A brave public servant - in the true meaning of the words.

Bob and Sophie will be fine after the shearing - their masters inner karma less so.

Sophie will move in an instant if she thinks there's food. Problem is she determinedly returns to her spot.

Do PONS shed out their winter coat at all?

No. Bobs coat is manageable. Sophie's is quite unlike any PON we've ever known. It is, to put it mildly, luxuriant.

The gendarme is a true selfless hero. So sad.

We are very sad over here about the hero losing his life. No words enough to describe.

The bravery and sacrifice made by the gendarme made our news here. The president tweeted about it, however he said nothing about the marches yesterday. Listening to those students, I was/am in awe and inspired by them.