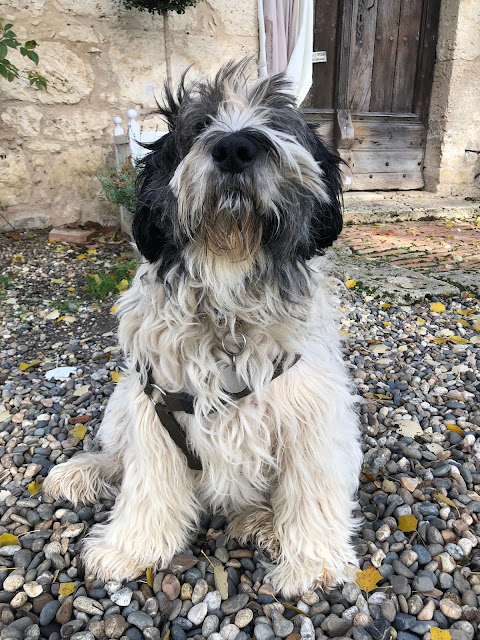 After the turmoil of the last few days The Rickety Old Farmhouse is returning to its usual routine. 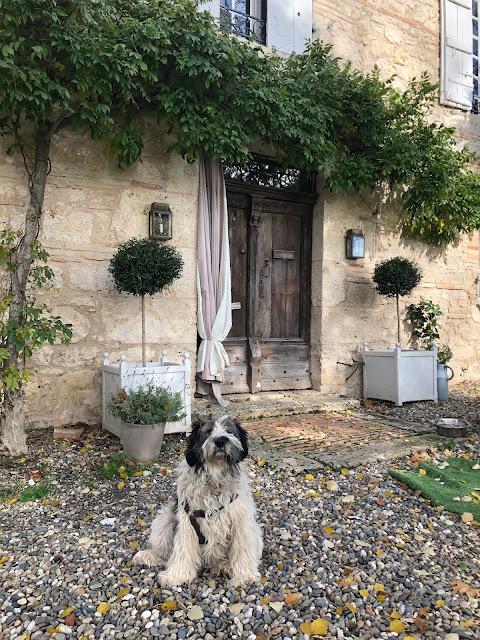 The cleaning lady comes. Sophie is told how brave she is. The post lady stops by. Sophie is tickled. Madame Bay shows up. Sophie is smothered in a cloud of Lily of the Valley. Loic the heavily bifocaled gardener arrives to blow leaves. Sophie follows him round but she doesn't like the leaf blower so maintains a prudent distance. Finally, the oven repair man comes to replace a wobbly door hinge. Sophie sits in a corner of the kitchen and monitors him warily. 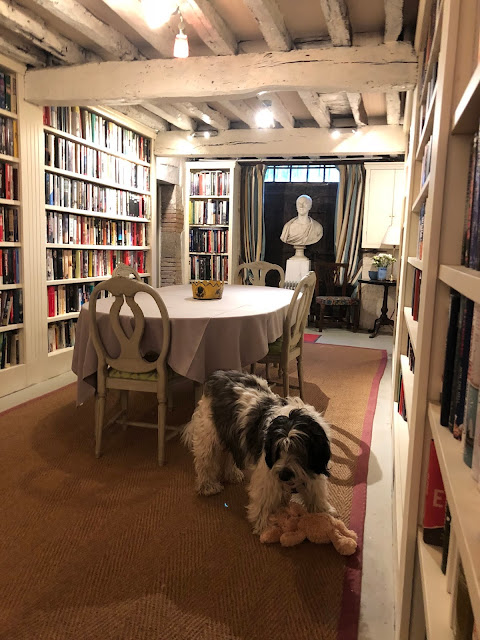 At the garden centre a variety of soft dog toys. Sophie is greatly taken with a ginger rabbit with a particularly loud and piercing squeaker . This is her new, favourite, plaything.

And how did Sophie react to Madame Bay's inadvertent aromatherapy treatment?

Good on you Sophie girl. I like your new toy.

Forward by two steps and an extra half an hour of playing catch.

After a rocky few days ( not confined to the canine component of the family ) we should never have doubted that Sophie is as tough as old nails and independent to go with it.

Poor Sophie, though confusion might be a blessing compared to the knowledge that the ROF's humans have.
You might enjoy/appreciate this podcast episode about dog psychology, and eventually find the book: https://freshairarchive.org/segments/new-science-understanding-dog-behavior

Of course Sophie is as tough as old nails and independent - she's a female! So glad that things are slowly starting to return to normal, and that you have the support of so many kindly people.
When we lost our much loved Lab. Petite-Chose, almost three years ago, it left a huge gap in our lives. In the four years she was with us, I spent so much time taking her to the vet. (she had so many problems due to overbreeding by her previous owner) that Inca, our other Lab. still associates my return home with her! When I park my car, she runs all round it, to see if I have Petite-Chose with me.

Delighted to hear there's progress. Routine, tickles and a ginger rabbit - the best of comforts. (May be for us humans too?)

Thank you. We'll look for the book to add to the library although Sophie may well require a case study volume of her own.

Bob was really a dog that wanted to do everything with his humans. He simply could not understand not being involved in the daily routine. We're only now discovering how much time we each spent with him. Every trip to the supermarket by The Font accompanied by the family guardian. Sophie is altogether more aloof and I think will adjust to sole dog role quite quickly.

What could ever match a ginger furry rabbit with a squeaker louder and more piercing than a fog horn ?

Dear ANGUS: what wonderful words to read just now.......how SOPHIE is adjusting and taking on the new role of sole PON at the ROF.......for as long as need be. And the new companion.....the ginger furry rabbit with the squeaker.......came at the precise needed moment. I have to mention something a cherished old-style Vet of ours once said to me when I asked him what his 'favourite breed of dog' was. He looked me straight in the eye and said: "well, I don't know - but I will tell you what the most "un-favourite" breed among my fellow Veterinarians is - the Scottish Terrier. I was horrified to hear his answer (having brought in our beloved MAGGIE and ANGUS on that very visit for annual check ups). I asked him "why." He said: "because Scottish Terriers are the most stoic of all dogs - they will never ever show pain or symptoms of weakness until it is absolutely too late to treat them." A trait, I admit, that we have admired and loved in our forty years with Scotties. And very true. I wanted to share that with you and your readers. Being a die-hard Scottish Terrier lover - you have taken a huge part of my heart with sharing your PONS with us. I had only previously seen them in the annual Westminster Kennel Club Dog Show each February in Manhattan - now PONS have become a passion. The loss of BOB this past week has hit me as hard as the loss of my own. He was a daily part of my life, thanks to you ANGUS.
A big kiss to SOPHIE from EDENA on the Westcoast of Canada. And love to you and the FONT.

So relieved to hear about Sophie. Hoping that you are mending physically, hoping that the Font knows that she is so wonderful. Love to all at the ROF. XXXX

Maybe not "the best day ever" but a full one that is a place to start.

Sophie's independent nature is like most of "my girls" have been. If I've had any problems between dogs, its been the girls. Hardly ever has there been issues between the carefree and comical boys. (knock on wood) Don't get me wrong, of course I love them all, but just having "my Sophie" as the single female in our house right now, is fine with me.

And if Sophie were in the US, she would love being in the kitchen today because of Thanksgiving. The smells etc., would probably make her the most social of dogs!

EDENA on the Westcoast of Canada, you are right about the Scottie. Having always had Goldens and Labs, we got a Scottie about 9 years ago - A long story, but it's because of Angus - And even though he's tempered by the Labs and Goldens, life to him is very serious. But his best quality, the one I love the most, is the bond and loyalty and devotion, that I feel from him. Something Labs and Goldens aren't really known for.

Ah - she heard you say how quiet the place was with only one dog.

In reading your few recent blogs, I think that Sophie will adjust over time to the absence of a male PON in the household, but I am not sure if the human residents of the ROF will.

Sophie's French Adventure blog is still a pleasure to read, but Bob's name and sweet face are deeply missed.

Very nice to read this morning that Miss Sophie is making progress. Trusting that all of you are also. As well as everyone who have been part of this blog for years.

Inca enjoys all the fuss of being the only dog in the house. She's a gentle girl and loves the attention she gets, as I take her out with me whenever possible. It's the first time in many years that I have had only one dog, and it's taken me some adjusting too.

The squeaker will make everything better! Baby steps are to be cheered!

Hari OM
Sophie and the GR... respite is a welcome thing, in whatever shape it comes...(says the woman who has just had a day's respite!) continued Love flowing your way. YAM xx

It'll will take awhile for all of you. If only squeaky toys could solve hurting.

I have been in the hospital for the past few days (routine procedure) and was frustratingly unable to post from my iPad - every time I hit "Publish," my words went "Poof". I had wanted to respond to Kim's post the other day, as we also had an experience where a dog underwent a personality change after a loss. Our dog Parsley was a wonderful Jack Russell/Norwich cross and we kept one of her puppies. When she became a mother, Parsley became much more serious and was constantly looking out for her offspring. When her son was hit by a car and killed, she was completely off balance for a time, but she gradually recovered and eventually reverted to her original happy-go-lucky, no maternal responsibilities, personality. Maybe Sophie will change a big as well now that she is an only dog (although PON girls seem to have their inherent quirks). We recently learned that Cherry has some sort of mass on her spleen and it seems that, because of the nature of the spleen, the only thing to do is remove the spleen, whether the mass is malignant or not. She is twelve now (which seemed young to me until last week and for which I am now deeply grateful), so it's a scary development. If we can, we'll wait until after Christmas.

The picture of dearest Sophie with her new ginger rabbit does my heart good. Now why would she be drawn to a toy with a piercing and loud squeaker? :)

Thank you. Hope the post hospital stage is going well . With regards to both Cherry and Sophie we can be sure of one thing - female PONs are a power of nature. Sophie ignored two broken legs and I'm sure Cherry will recover rapidly if there are sufficient inducements - sausages highly recommended in the recovery stage !

Because at the time of choosing she heard the squeak then heard The Font say ' No way is that coming in the house'.