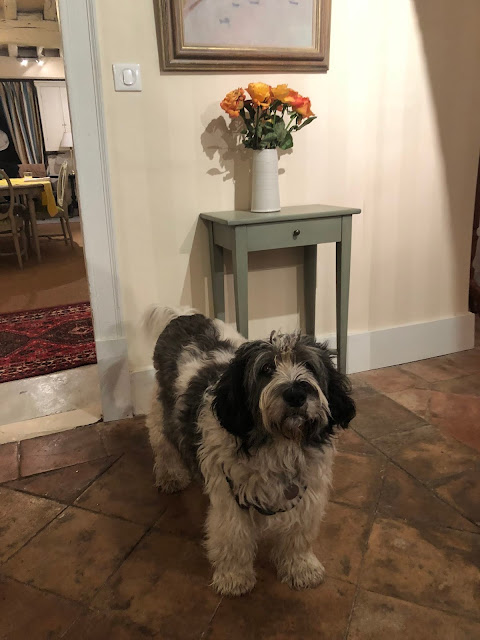 The mayor is at the front door early. His wife, who has had no less than five hip operations, has had a difficult night. He's made her breakfast and is now up and about checking on his villagers while she has a doze. An excuse to be out of the house. Being a dog family he knows that we will be up early. The PONs are delighted to welcome this early morning visitor. Over a cup of coffee he tells me that he's going to retire in March and that all the work that's going on in the village is his ' swan song '. Today electricians will come to install new motion detectors and lights above the church and village hall doors.  ' Then it's all done ' he adds with a wistful smile. 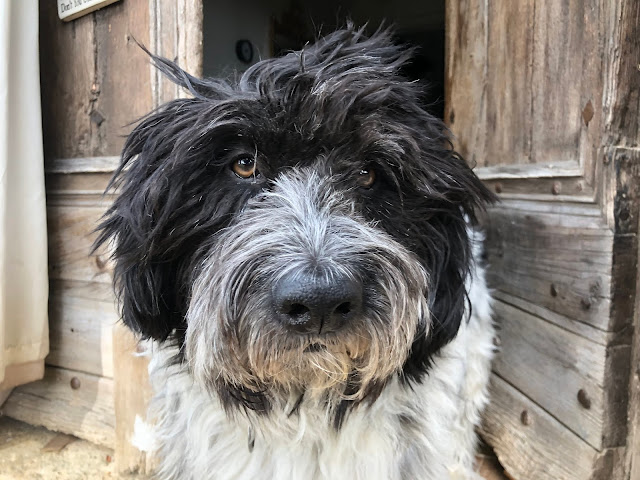 No sooner has the mayor gone than Loic the heavily bifocaled gardener comes to blow leaves. There are a lot of leaves to blow. The PONs leap into the newly formed piles, roll on their backs and thoroughly enjoy this new adventure. Loic seems oblivious to the fact that his hard work is being scattered everywhere. With a broad grin he informs me that he'll be going to the dentist this afternoon. He's looking forward to it.

Someone has left a rather tasteful floral decoration in the church porch. Deemed too fancy to be put out on one of the graves in the churchyard for Halloween ? 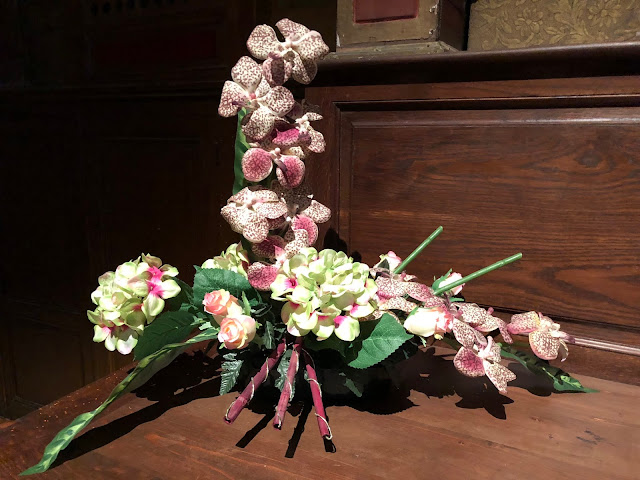 Good on the mayor - he deserves to put his feet up and spend time with his wife.

The flowers are rather decorative.

Does the mayor have a successor lined up?

Hari OM
I too wondered about a successor - it is often the case that the incumbent has done such sterling work, whoever takes over will have much to prove. The village will not fully appreciate what it had until it isn't there, one suspects. YAM xx

I will miss the mayor, and the devotion he and his wife have for the Villagers. Bob and Sophie have had a very exciting early morning. The floral arrangement was created by an artistic individual! While it may have missed the mark for this occasion, much thought went into the creating of it.

Angus for mayor, perhaps? Or do you need to be French born and bred?
The decorative flower arrangement is more suited to celebration, rather than a grave.

He thinks his 85th birthday will be a good time to retire.

There is a deputy mayor but we're not quite sure who he is.

Some of the village cations will be mortified at the change. Others will cheer. French village life is a maelstrom of generational rivalries and slights.

We shall miss him too but shall enjoy meeting a new cast of characters.

I fear that only EU citizens can be a mayor.

Perhaps the floral arrangement is for someone linked to the village but not buried in the cemetery?
As for the mayor, he seems to have been a true servant of the public, as well as to his wife. I hope we will still get news of them. Too bad Angus was so close to being able to succeed him. Maybe if BoJo screws up....