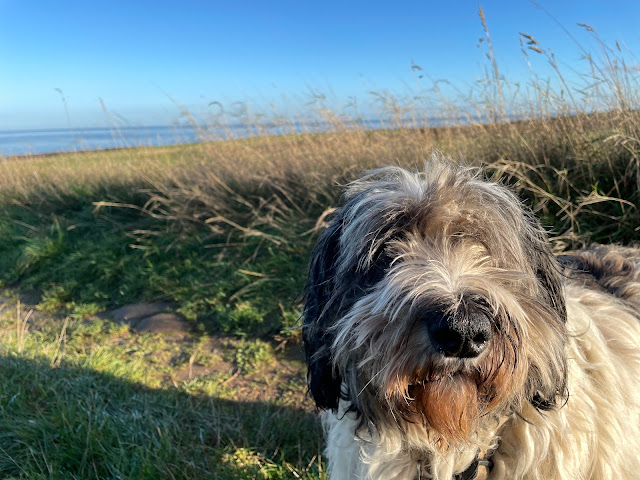 Sophie seems to know that I'm going away. I get the 'accusatorial ' look. 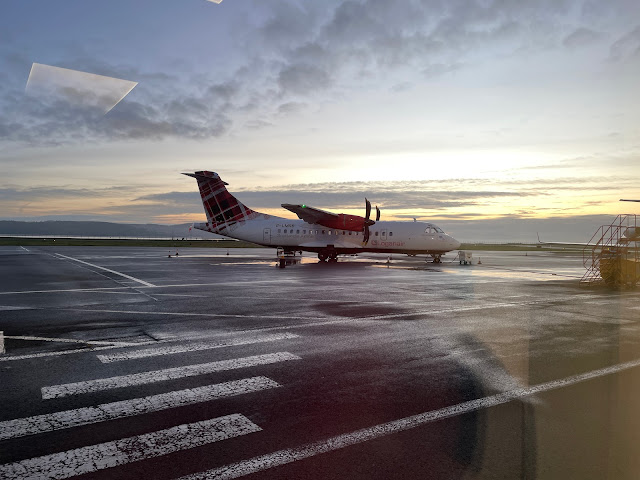 Down to London for the night on Scotlands 'favourite' and indeed  'only' airline.

The Christmas decorations in the departure lounge are of the less is less variety. 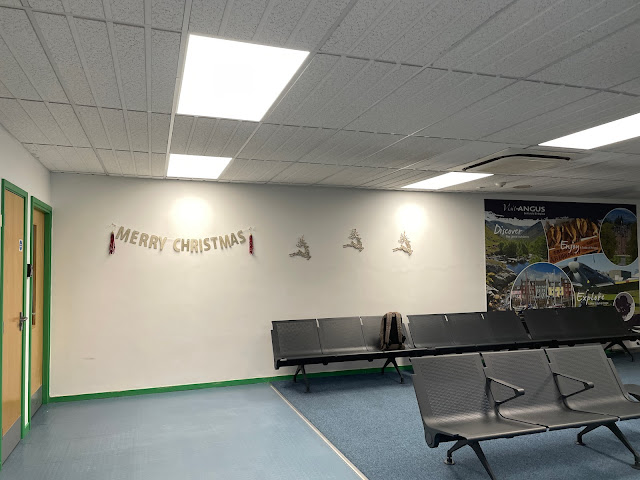 London hotels continue to be booked solid by bargain hunting Americans and Asians enjoying the recent weakness in Sterling. Angus finds all his favourites sold out and opts for a new high rise hotel near the bright young things at the AI company. 'You'll love it. It's so cool ' they say.  Rule #5 in life. Never accept a recommendation from anyone who is 40 years younger than you. They inhabit a different universe. 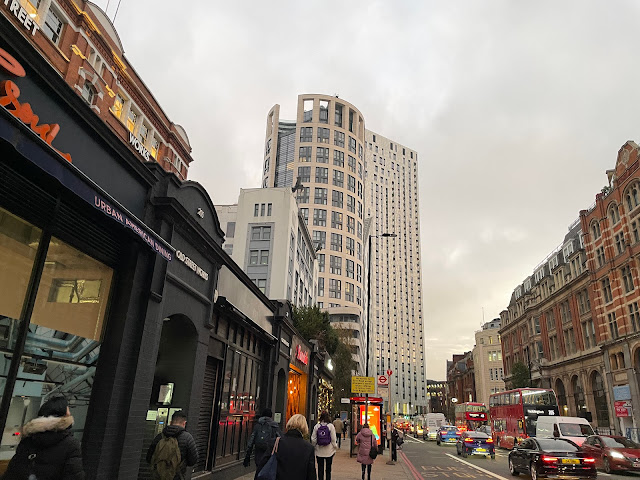 Angus does not find the hotel 'cool'. The reception area is approached through a snaking wicker tunnel festooned with fake apple blossoms. This leads into a large circular area lined with red curtains and lit by purple spotlights. To begin with I think this must be the bar. Check in, when I find it in a dark and unmarked corner,  is staffed by an unsmiling young lady wearing what appears to be a pair of red silk pyjamas covered by a black silk dressing gown that is held in place , at the throat, by a gold clasp the size of a small cat. ' I trainee' she says by way of greeting . She then points to a sign on her pyjamas that says 'Trainee'. This is followed by an accusatory 'What your name ? Where your passport ?'  The young lady is not a native English speaker and it takes some time to explain that I've come from Scotland and don't have my passport with me. ' It's all part of the same country ' I explain. This comes as a surprise to the young lady who eyes me suspiciously and calls 'management'. 'Management' also seem to find this unlikely but we settle on my driving license as proof that I'm who I say I am. ' I'll accept it this time' says a stern young management man in a manner I find mildly irritating. "That's so very kind of you " I reply.

The hotel does not have keys. Instead it has an ap to download that opens your room, turns on the television, contacts room service and allows you to call the lifts. One entire wall of the bedroom is taken up with a tv screen that must be all of nine feet by eleven . It takes Angus some time to learn how to use the 'ap' to get the tv started. Somehow this new hotel already looks old and scuffed. It must be a style that appeals to hipsters. Angus particularly disliked the window which was a glass 'slash' that ran at a 45 degree angle across the back wall. 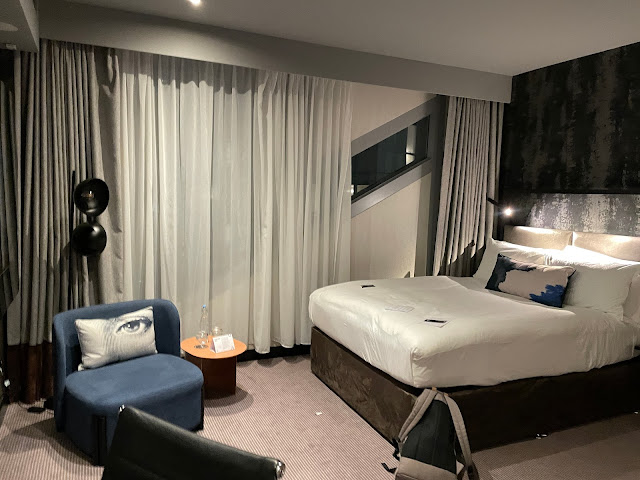 Christmas decorations in London seem to be rather less 'austere' than at the local airport. 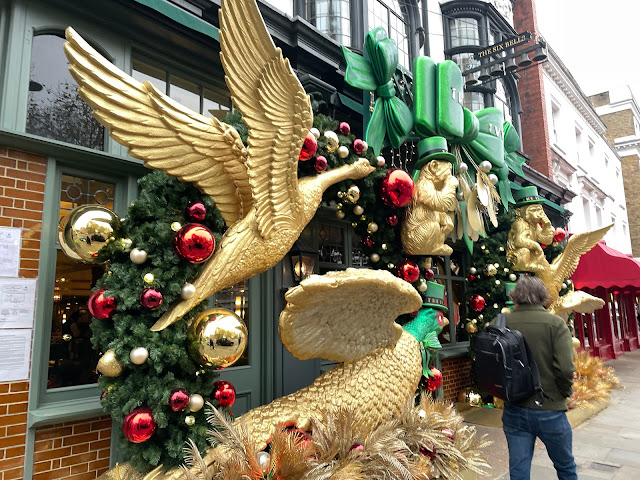 Sophie has now discovered the excitement that is Dundee airport and been reunited with her entire flock.
And here is a very happy and relaxed looking Joan Armatrading :https://youtu.be/SqW3oPS0dfw?t=6131
Posted by Angus at 8:36 AM

I think the comment on that hotel and that room from this definitely senior person is OMG! - and most definitely not in a good way.

The hotel looks and sounds a complete nightmare. When I started reading I was thinking at least check in was via a human being and not an app. But quite possibly in this case, an app would have been preferable...
Cheers! Gail.

What a drearily depressing hotel room - it looks well used and uncared for. What rude staff too - though the bit about the passport and your lesson on British geography made me smile! British national are probably such a rarity that they don't know how to deal with them.
So glad that the wayward member of Sophie's flock has returned to the fold.

Diary of a Nobody said...

The hotel phone app would have sent my husband into a complete panic as he is firmly of the belief that technology hates him , to be fair I have far less trouble than he does .

Oh My ! I think dossing down on the street might be preferable! Or in one of the London churches that let people sleep in the pews! Are there self opening doors for Sophie at her new airport?

Just had another thought after looking at the Christmas decorations at the airport. I wonder if the person responsible for such intense minimalism is related to the mayor's secretary in your little village in deepest France profonde? The decorative style seems remarkably similar, though possible slightly more sophisticated.

Given the hotel description, I find the eye pillow especially creepy.

Too many James Bond movies i guess, but I immediately imagine a nest of spies observing the inhabitants of the "cool" room from behind that ginormous TV.

I had exactly the same thought as Coppa's girl regarding the decorations in the lounge, and the same thoughts as everyone else on the dreadful hotel room. I did like the Christmas leprechaun monkeys (??), however.

I'm guessing that their accepting your drivers license 'this time' probably means to you, that there won't be any worries about a 'next time.'

Laughing, in horror, at the hotel room and amazed and annoyed at the complete ignorance of the staff. I agree with Gail, check-in via an app would have been preferable, and with EAS about the eye pillow, and I add, the off-kilter window. Perhaps it's worth your time to post a review? Or, perhaps not....

It's ghastly! The eye pillow gives me the creeps. I agree, it looks very shabby.

The hotel’s motto, perspective is our attitude, might be a little skewed.

Thanks for posting the video of Joan Armitrading receiving her degree. I'm teary-eyed. What a pioneer! (That hotel room is atrocious!)

The hotel would have to pay me to stay there. At least you only had to stay one night.

Something very 1970’ s tacky about the room. And the pillow with the eye? Ghastly!

At least the departure lounge had "Angus" written on the wall twice to the right of their Christmas decorations! I don't think I've ever seen my name on a wall.