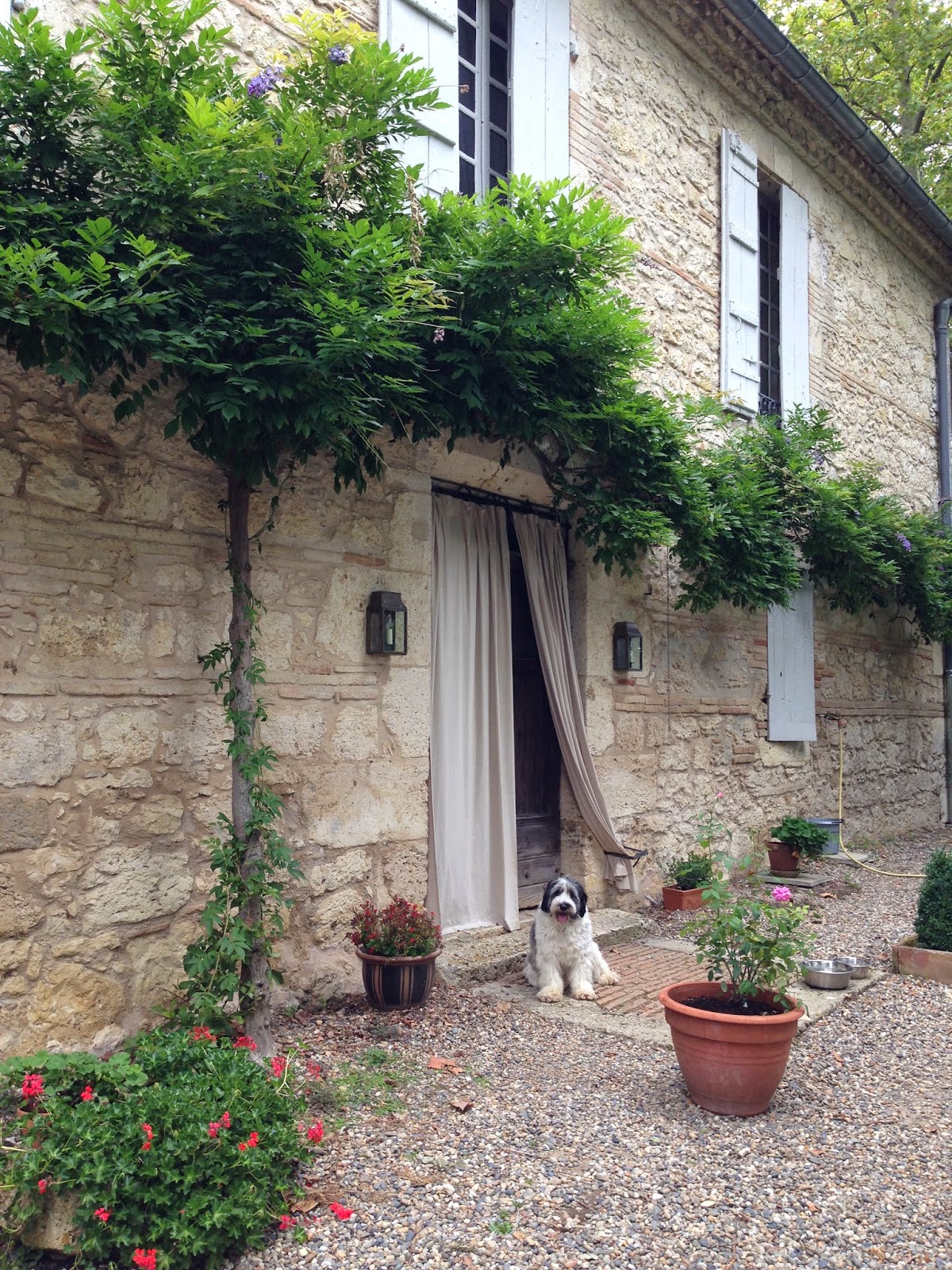 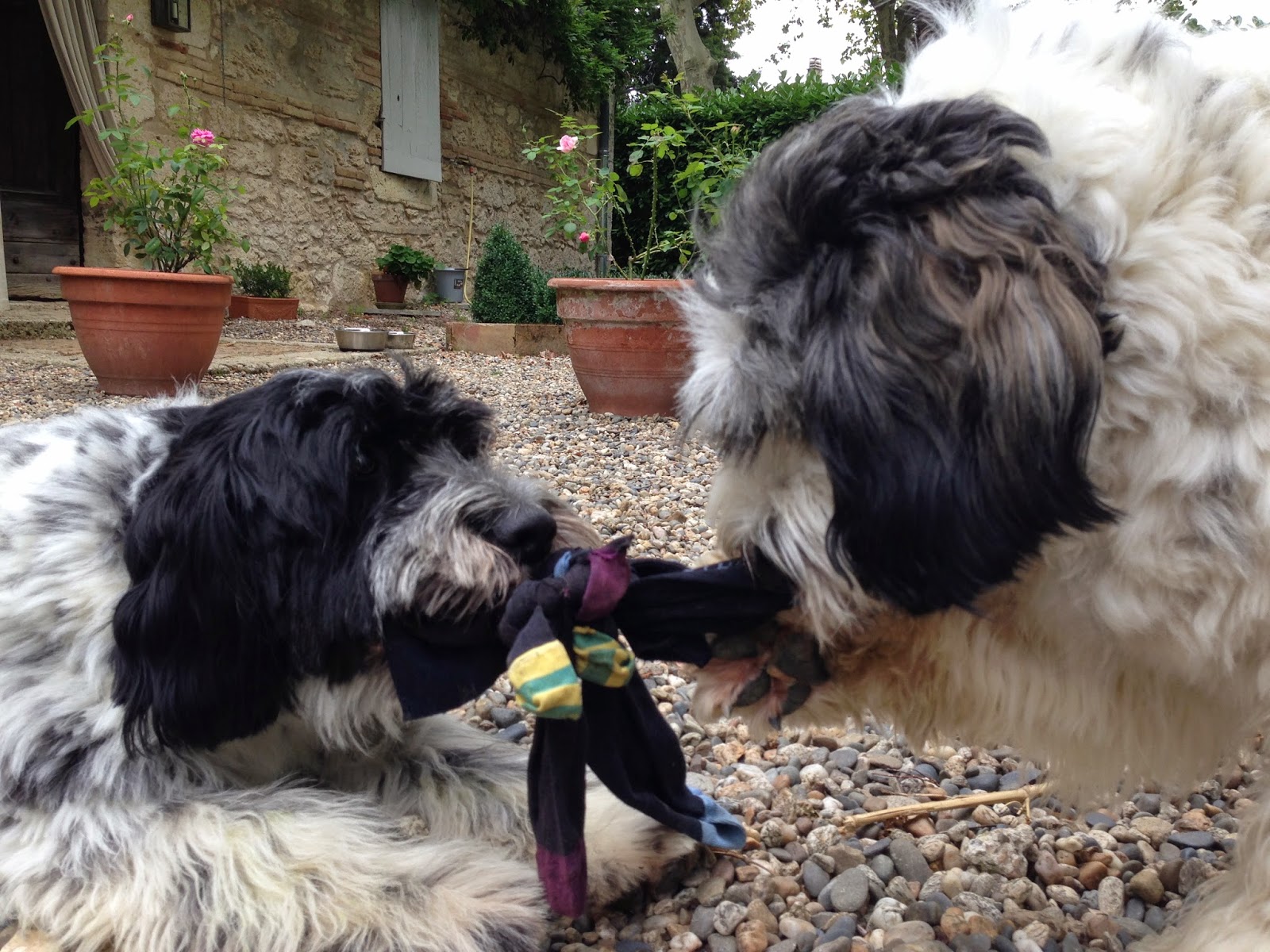 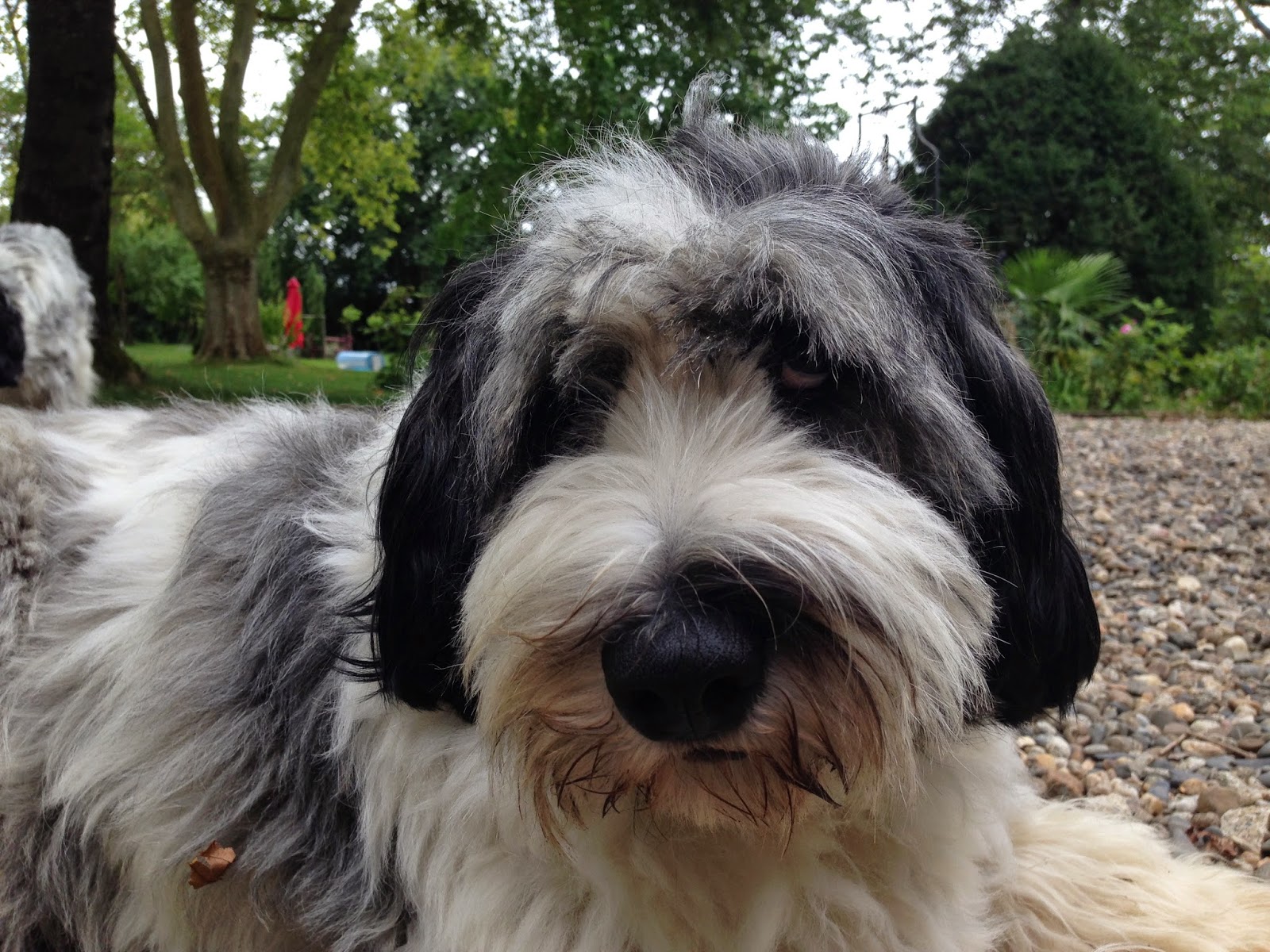 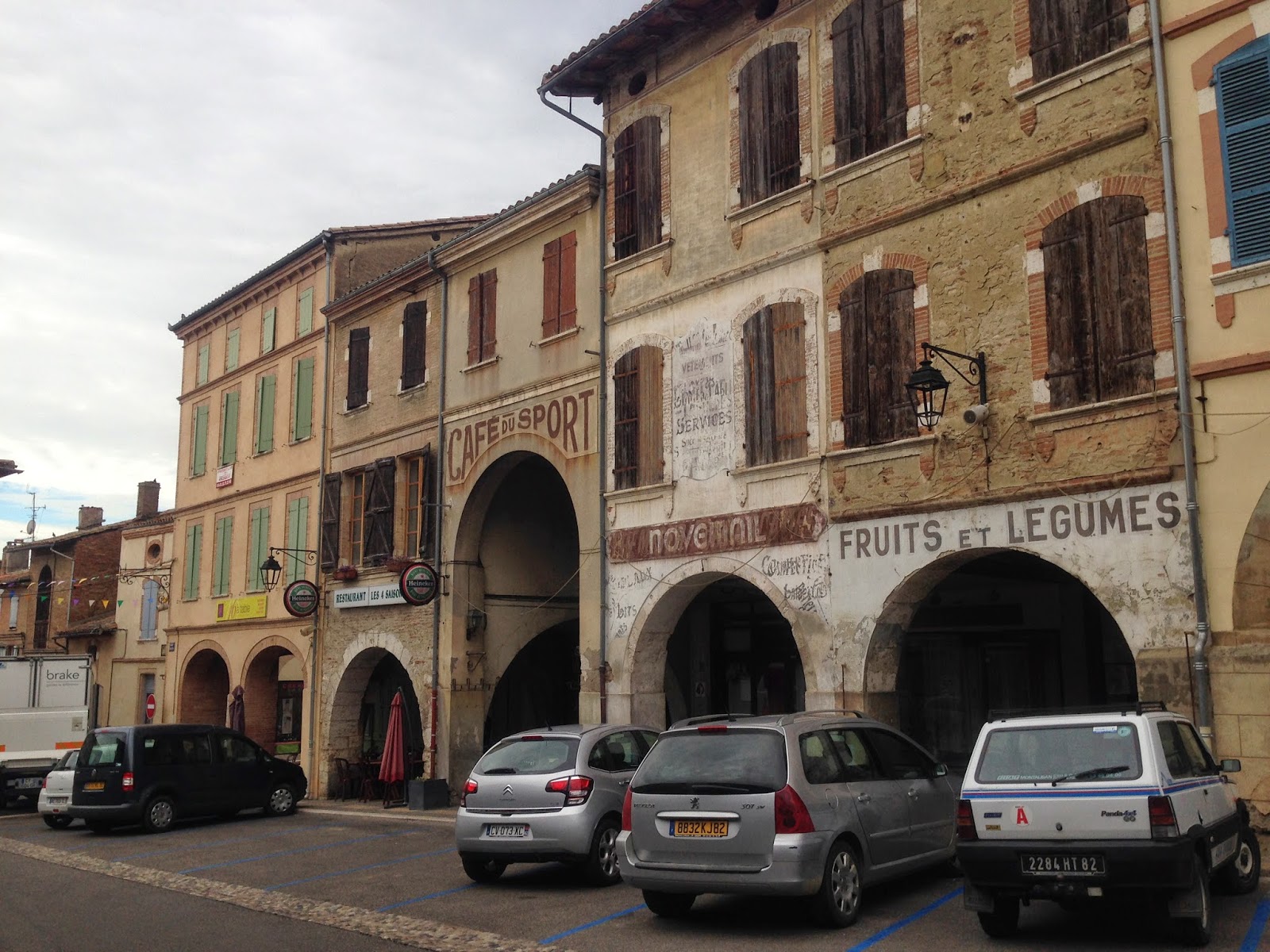 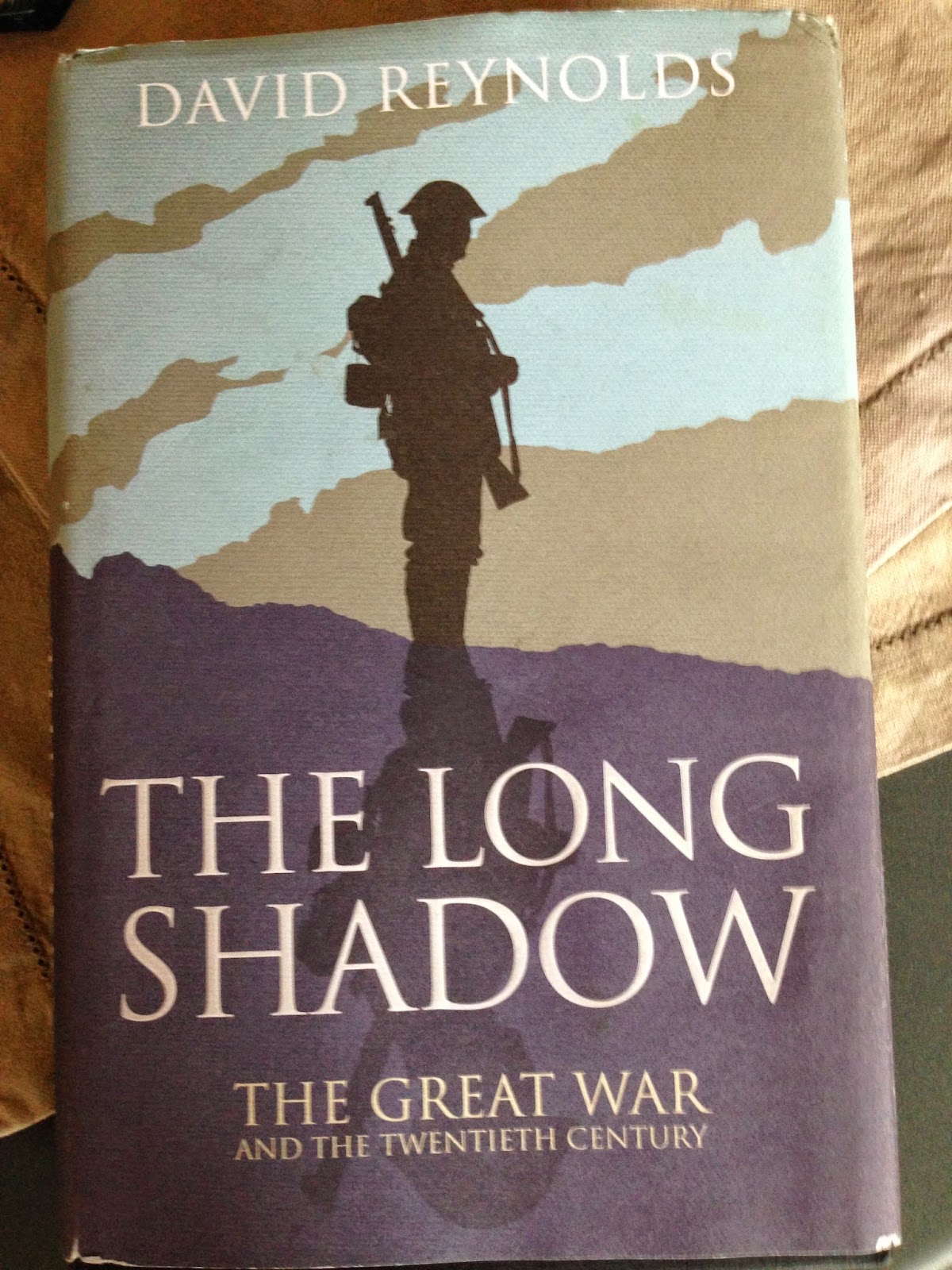 The wren that has taken to living in the wisteria above the front door has been joined by a goldfinch. Sophie spends her day, head craned upwards, daring them to fly down.

The font collects all the odd socks that Bob hasn't chewed and knots them together. The PON's find this new toy alluring. '' Must be the scent " I'm told.

Sophie has her fringe trimmed. She is much more affable when she can see what's going on and isn't caught by surprise. PON purists would be aghast.

In the afternoon we settle on the terrace. Time to finish'' The Long Shadow " - a new history about how the Great War shaped our identities . During the First World War there was a three minute silence every day in South Africa to remember sons and fathers fighting in France. This was then adopted as the two minute silence ( subsequently reduced to one ) still observed in Commonwealth countries. Not an easy read but a challenging one.

Isn't life amazing ? http://www.nature.com/news/lakes-under-the-ice-antarctica-s-secret-garden-1.15729
Posted by Angus at 7:11 AM

The FONT's creative assemblage of old single socks looks (to me) exactly like a penguin, looking upward, sporting a very jaunty striped scarf and a pair of different colored leg warmers around each shin. Do you see what I see? (I'm very very good at 'cloud games' as well!). Regards from the
Westcoast of Canada.

Exactly what I thought :-)

Loved "the font's' sock knots. For extra fun, an old tennis ball before you tie the knot, the sock toy ibecomes a great throw and fetch object. My two golden retrievers love this combination! Of course using old socks has taught my dogs that socks really are for chewing on, so perhaps these toys aren't so cheap after all considering my two now think all unattended socks in our house are potential toys!

That should say "add an old tennis ball"

For some reason Bob doesn't like playing with tennis balls. He runs away from them -. Can you explain that aspect of canine psychology ? Socks or knotted pillowcases are his thing.

My mother would approve of Sophie's haircut. Having complained about me 'hiding my eyes' as a teenager, then the same for teenage granddaughter, now she has Bertie in her sights.
Cheers! Gail.
PS A penguin?

'The largest unexplored ecosystem on Earth — making up 9% of the world's land area'. Amazing and fascinating, but part hope of me hopes that these incredible places aren't spoilt by our curiosity.
Merlin has worn his fringe short for a long time. I love to see his eyes and I am sure he is (a little) less skittish for it.
x

Penguin……Puffin……whatever. Cheers from the Westcoast of Canada.

We had an Old English Sheepdog. Purists said he could see through the fringe....he couldn't. Was always running into door frames and trees. Finally had to have a pony tail.

Our kitten Pumpkin used to bring us presents of socks (and once a pair of knickers from the dirty linen basket!!) that she found - we guessed that it was the scent. So I would imagine the PONs love the scent of your socks too. Whatever it is, it looks as though they are having a FAB time!

We still observe the one minute of silence here for the fallen, especially at funerals of dignitaries and official ceremonies.
Angus, I must commend you for posting the most interesting articles and videos.....I enjoyed this one a lot.

I'm sure the sock toy was a big hit! Sort of like the way a box at Christmas can sometimes be more exciting than the gift inside.

When the canine and were taking dog training classes, one of the other dogs seemed a bit unobservant. The instructor got some scissors, trimmed the long fur in front of the dog's eyes and voila...the dog was smart. He wasn't dim, he just hadn't been able to see clearly through his bangs.

Like Gail's Mum, I like to see the pup's eyes and your two look much cuter snipped! Someone once told me dogs didn't mind hair over their eyes and I must ask just how people know this. When small children are learning to put on their shoes, they often put them on the wrong feet and don't seem to mind, but they like them right feet better!