A demon with the clippers. 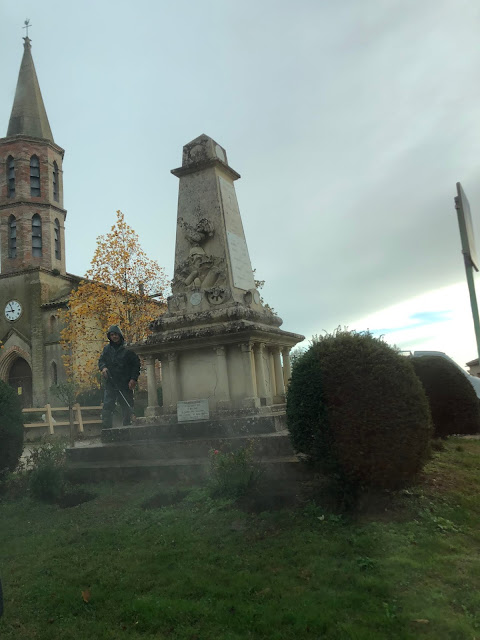 There's a chill wind blowing as we head off to the bakers. This morning they're power washing the war memorial ahead of Sundays ceremony. The water from the jet wash blows everywhere. Most of it seems to end up on the poor workman, who is drenched, rather than the stonework. 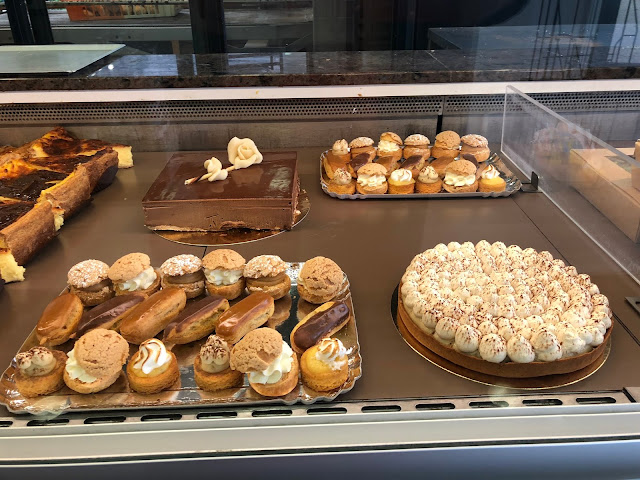 In the bakers a very 'brown' collection of cakes.

Angus pops into the hardware store to buy some picture hooks. In the lobby they have a display of '' Illuminated Apparel ".  Angus finds himself studying the display closely. 'Why in heavens name would you want to wear that ?' he finds himself thinking. Another sure sign ( they're coming thick and fast ) that I've become my father. 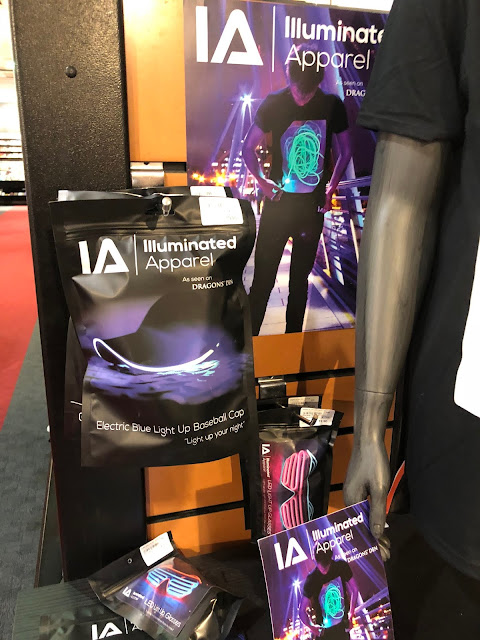 Back to the village to find the wind has died down. The war memorial is looking wet. Perhaps when it dries it will look brighter ? The workmen have started to install a wooden fence. First impressions are that it's too big and too heavy and out of proportion. let's reserve judgment until it's in place. The village is now the proud owner of a car park that no one ever uses, a petanque court that's used once a year and now railings round the war memorial that wouldn't look out of place in a stockyard. 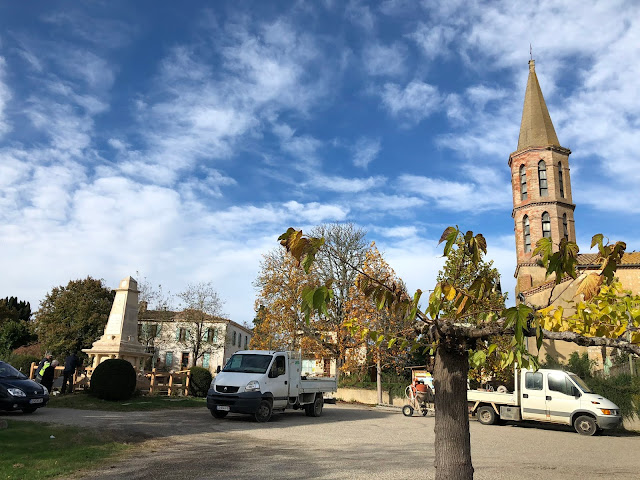 While Bob goes off for a walk round the lake with 'The Font' Angus and Sophie head off to the Arab barbers by the railway station in the little market town. The Arab barber is a demon with the clippers so I'm in and out in ten minutes. 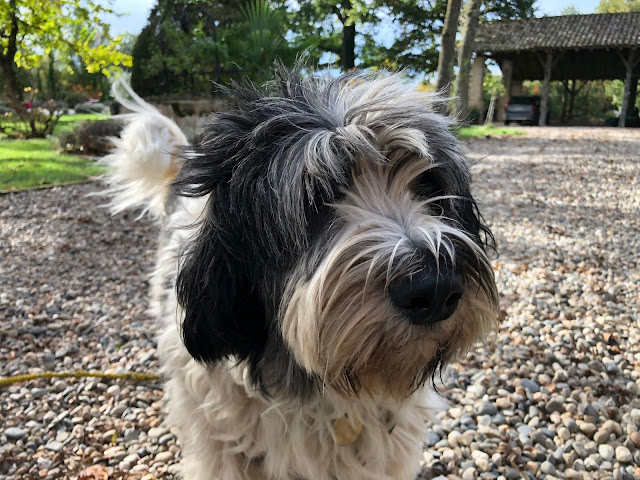 Sophie seems unconcerned by the trip to the barbers. She adopts her ' If you're not worried why should I be ? ' attitude and settles down for a doze. Ahead of us a six year old boy who squeals with delight when the shears tickle his scalp. His mother tells him to behave. Sophie sits up and looks in utter amazement. 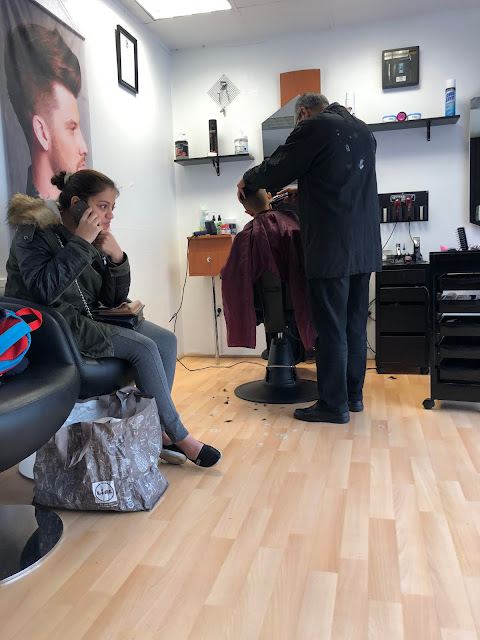 Those little things too unimportant for a diary but which taken together make life, life.


"The scent of rum in your voice makes my head spin ". This is perhaps the most French video ever: https://www.youtube.com/watch?v=tsqG176hmUY

Oh dear, that fence is rather unsightly and as you say well out of proportion to what it is surrounding.

Hmmm - the bakers offerings are rather beige although we often can't go past a nice eclair.

Maybe they'll paint the fence to tone it down a bit

I'm guessing that Angus did not tell the barber he wanted to look like the man in large photo on the left...
As for Stromae - it takes a certain confidence for a young man to carry off pink flowered 'leisurewear', but mostly I was transfixed by the glimpses of the guitarist's socks.
Have a great Friday!
Cheers, Gail.

The fence doesn't much resemble the old photographs.
I am surprised the boulodrome is used but once a year. Ours gets a workout on Thursday nights in summer--the competitions sometimes stretch until 3 or 4 a.m.--I know, because we live close enough to hear the announcements. And villagers go to practice. It can be busy on weekends, but even during the week there will be an old man practicing his toss.
There's a company in London that makes "smart" clothes you can change via an app on your phone. You also can send "hugs"--if you have a special shirt, you hug yourself, and embedded haptic sensors pick up the data, which is transmitted to another owner of the shirt. The sensors then vibrate on the other shirt to give a hug sensation.
Don't ask me why.

Hari Om
...that's the trouble with an overflow of technology - it has to find somewhere to go... YAM xx

I thought from your headline that you had tried to trim Sophie.

The word 'demon' would certainly be in any sentence describing Sophie and the grooming table.

How amazing that one can buy a shirt that gives you a hug.

I am going out on a limb here, possibly the one that was lopped off from the tree on the right front in the monument picture, maybe . . . A sturdy fence was built knowing that children would be playing on it ?

I have seen those type shirts being worn by people on motorcycles, weaving dangerously in and out of traffic on the freeway.

Yes I vote for the man in the picture on the left wall. Oh, are we voting? It seems voting is what has been going on all week in the US.

Your saying the Arab barber is a demon with the clippers reminds me of the military barbers giving "trainees" their first haircut. I think they did it in 5.