Lynched by a mob. 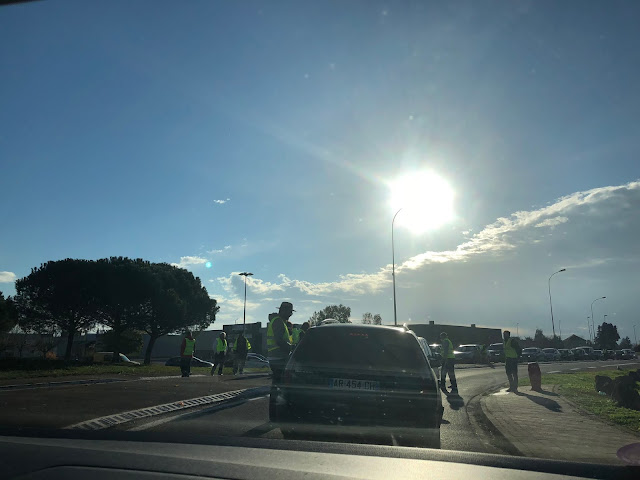 At the roundabout a dozen gilet jaune protesters are blocking the road. They're letting one car through every three minutes. There's only two cars ahead of us but there must be at least eighty coming in the other direction. Office workers heading off to the Airbus factory in Toulouse. The line snakes back to the next roundabout. The protestors block the road by marching backwards and forwards across the zebra crossing very slowly. One man thinks it amusing to lie down and pretend to be asleep.  A lady stands and smokes her e-cigarette while doing a little on the spot dance. Each driver is asked to roll down their window and sign a petition demanding lower fuel taxes before being allowed through. Angus replies in Swedish ( with matching Swedish chef accent ) and denies knowing a word of French, English or German. He ( and two vocal PONs ) get waved through in super quick time. One of the protesting women turns to her male colleague and says ' We've got a right idiot here '.  She doesn't say 'idiot' but the rather less politically correct 'thicko'.  I think of shouting out something in French as we drive off but think better of it. Being lynched by an angry French mob is not in todays schedule. The PONs go wild in the back. 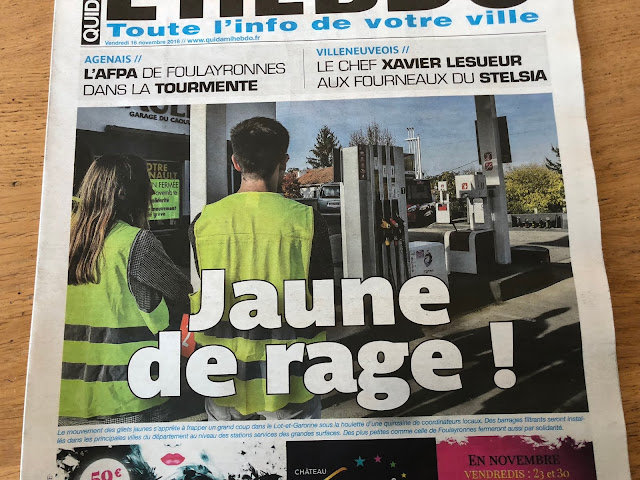 This mornings croissant is small compensation for all the hassle . It gets a 6.8 / 10. Something about the dough that's more like loaf than croissant. The crust is super flaky rather than flaky which generates a small blizzard of crumbs. The PONs approve. 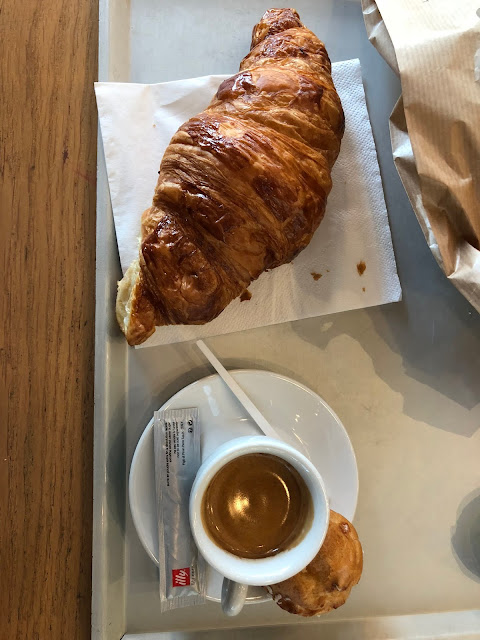 On our return home Bob gives 'The Font' a full and detailed run down on this mornings events. 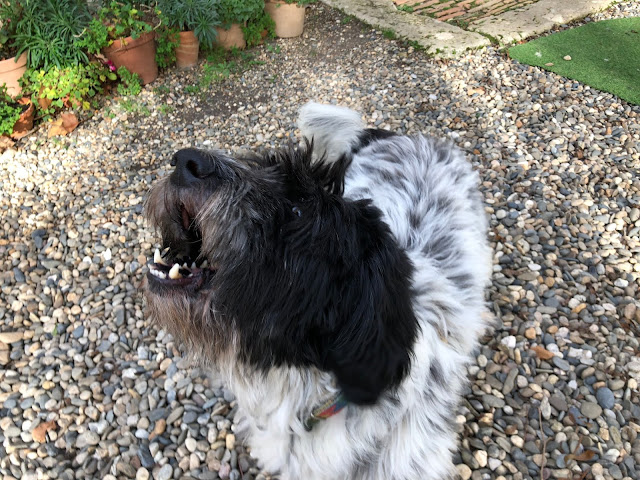 In similar circumstances I might deploy some NE Scotland Doric. Bertie would no doubt also provide backing vocals.

I have taken the same passive-aggressive approach in similar circumstances, but not knowing Swedish I used Swahili, which is almost 100% sure to not be recognized.
We didn't leave the house at all, rather than risk running into the mob. Their anger is misplaced--the gas tax is to counter pollution, and since diesel cars have been found to be far dirtier than their manufacturers had claimed, it's only normal that there's a bigger tax. But I guess the people buying Qashqais, Land Rovers and Capturs aren't interested in pollution. It's a bit like people protesting a tax hike on cigarettes. I have a hard time sympathizing. OTOH, if the government cared about pollution, it wouldn't have included full-size pickups as professional vehicles eligible for tax breaks.

Great strategy! Bouncing Bertie reminds me that long ago a fellow Aberdeen university friend and I used Doric very effectively in the posh Angelina tea room in Paris. Recently I've taken to speaking Norwegian to the kind people who call to tell me my computer has a fault and that it can be sorted by going through a few simple steps including handing over control of it to them. Very satisfying!

I suspect manipulation by the various political extremes to work up a nice bit of civil unrest. Carbon taxes have been demonstrated to work, so I too am not very sympathetic to the protesters, and will no doubt get an earful from at least one of my friends as a result.

It's the anger borderline violence that surprised me. They were surrounding the car, banging on the windows and shouting. Bad enough with dogs in the back of the car but if I'd had toddlers I would have been much less relaxed about the event.

The media plays up the unhappiness in the UK and the US but the level of barely hidden aggression we faced this morning indicates that Brexit level divisions exist elsewhere.

Hari Om
Very few folk understand that taxes are about improving things for everybody (in theory...) There are also few folk who have sufficient income to not worry about anything which will cause it to become even less. The imperative of bread on table versus whether the air is a microgram cleaner over the next five years... is kinda what drove La Revolution, n'est-ce pas? Annoying though it be, I see both sides!

Meanwhile, the experience of a blockade of faux escargot brought us entertainment from Angus and the PONs!!! YAM xx

Good on you for avoiding confrontation with the protesters. I don't like their tactics and as a woman I would feel threatened by their behavior. It almost wishe you had a big snarly barky dog rather than soft looking Pons.

No doubt this will cause another drop in Macron's ratings although I don't think he'll give in to the pressure, at least I hope not. Btw I checked on Google and found that the last time the US raised gas taxes was in 1993!

The PONs consider themselves to be fiercely intimidating.

except in California, where funds are going to much needed road repair...

I think your speaking Swedish was the smart thing to do, and kept you all safe.