Best in the world variety. 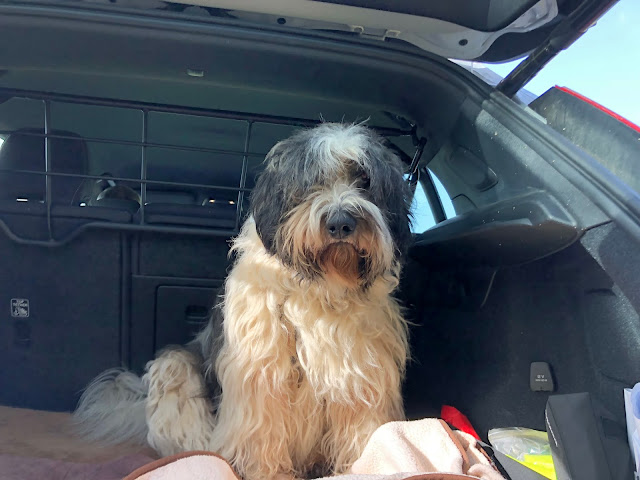 A busy start to the day. Angus talks to men in dark suits about Nord Stream 2, Joe Mancin as the next W.Virginia governor and the leisurely roll out of the vaccine in France ( the UK manages in a day and a half what the French do in a week ). Angus would really like to get back to see the dentist ( words I'd never thought I'd write ) but can't make travel plans until he's had the jab. At this rate it's goiong to happen in November. 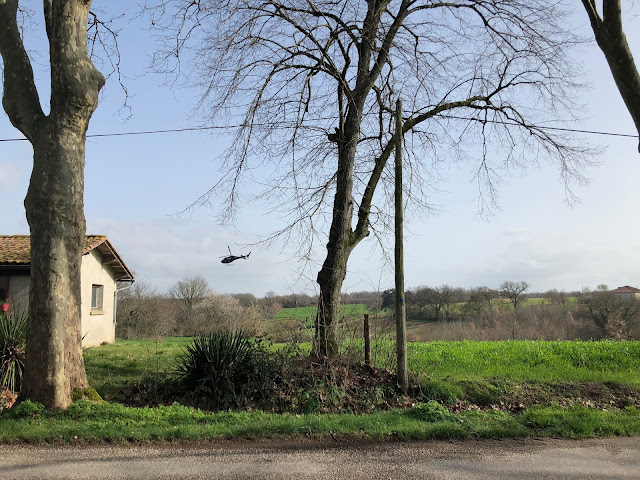 The electricity company helicopter flies over checking the power lines after the recent gales. Great flying skills but a noisy wake-up call for the villagers. It's just as well we're up and about because the security company is on the doorstep at seven thirty.  This is a surprise as I'd only phoned in the fault last night. The technician lives in a neighbouring village and has opted to schedule us as his first visit of the day. He is not a talkative man so we have no indication of what's caused the system to go down. Sophie takes a keen interest in what he's doing but soon tires of him when it becomes apparent he's not brought biscuits. The repairman works diligently and quickly. The surprising thing about France is that half of the workmen are of the 'best in the world' variety. The other half aren't. The builder and pool repairman fall in this second category. 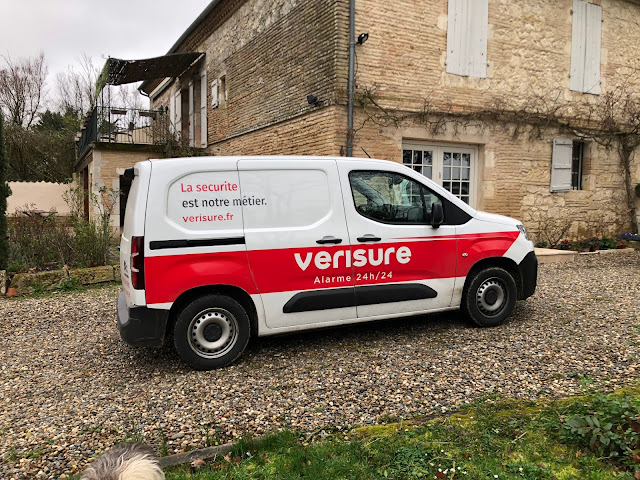 It's hardly surprising that after the helicopter wake up call and the arrival of a repair man Sophie feels the need for a quick nap on the doorstep  in the start of day sunshine. 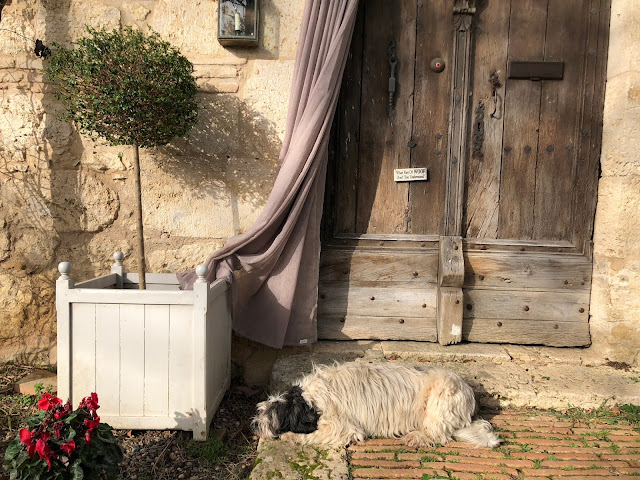 This is something I don't get :https://monolithtracker.com/
It is highly improbable Sophie will ever appear in something like this :https://www.farfetch.com/fr/shopping/women/moncler-x-poldo-cape-pour-chien-mondog-item-16177366.aspx?storeid=9339
Posted by Angus at 7:13 AM

When we lived in Norway we saw a dog of Sophie's general style wearing an all over snow suit - paws, head, tail, and a small opening for toilet needs were all that was exposed. It was trailing through the mountains (in deep snow) behind someone seriously kitted out as a photographer and didn't look the least put out by having a snow suit on.

After the shenanigans by the Volvo folks, it is good to know there are also some "best in the world variety" repair people in your area as well. Their truck certainly looks very smart. Your link makes me realize that the number of dog clothing stores in Tokyo has declined dramatically over the past ten years or so. There used to be several right in our neighborhood but they are all gone now. Maybe people are doing their shopping online, but I suspect the dogs may have risen up in protest. We do have one very good pet supply shop that carries some rainwear, but that's about it. Cherry had a bright red raincoat that we used occasionally in the early years, before we realized she preferred we hold an umbrella for her. (She was not a country girl like Sophie.)

We think Sophie would look rather fetching in one of those suits. Think what it would do to tame her "just pulled through a hedge backwards" look - no more need to groom after each wild and windy walk! Wearing one might encourage even more attention.
Generally tradespeople here are reliable and mostly turn up when they say they will (give or take the odd hour or two!), and often ring ahead to say they are on their way. The thing I still find strange is the fact that if they say they will come in the late afternoon, but don't specify a time, it could mean that they arrive any time until 9 p.m.! Very occasionally we've had men working up until midnight!

Bertie says that 217€ would buy a lot of dog treats and some humans have their priorities all wrong. Gail notes that if she charged the 'living wage' for her time spent knitting his Nordic Snowflake jumper, it would have cost at least that much!!

Our 8 year old Doodle, Lola, has finally figured out that her red plaid winter coat isn't the nemesis she thought it was.
I recently saw on IG a small dog with snowball covered legs getting them removed by, of all things, a kitchen wire whisk!
I tried it on Lola and it works to remove them and she doesn't mind. Of course she doesn't have to pick up the pile of snow left afterwards on the floor.

What a brilliant idea.