Earlier in the week, when we were waiting for our jabs at the medical centre, a man wandered in to the reception to make an appointment for a vaccination. I'd expected that the staff would give him a date a month or six weeks in the future. Instead he was given an appointment the following day. Now, according to this mornings radio,  it's official. You can either turn up at the surgery in the evening to see if there's any vaccine left over or you can book up, whatever your age, and try for an appointment in the next 24 hours if there's a slot available.

Does this mean that the system is working to perfection ? Or, does it mean that take up of the vaccine(s) isn't what had been hoped for ? 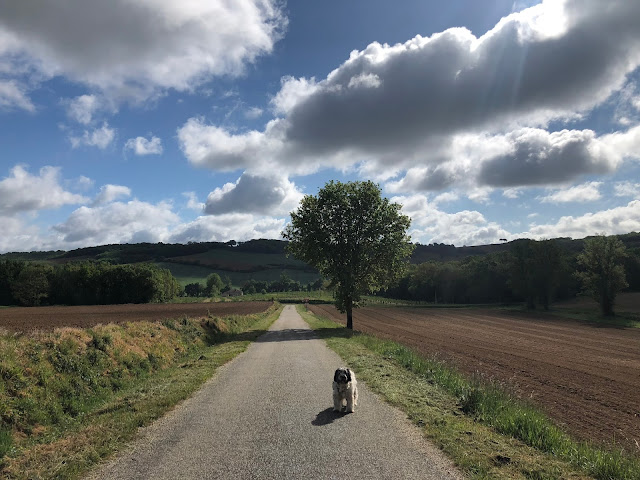 Here, the world is  calm and peaceful. A bit of a breeze this morning. The clouds ambling along above us. It was voting day in Scotland yesterday.  Despite the stormy weather turnout seems to have been high. It remains to be seen whether this helps or hinders the Nationalists with their call for independence. Sophie displays a haughty indifference to her companions conversation. She's much more interested in some fox poo she's discovered on the recently cut grass verge.
The man with anger management issues drives by. He stops long enough to tell us his court case against the builder has been delayed again. The fourth postponement due to the pandemic. 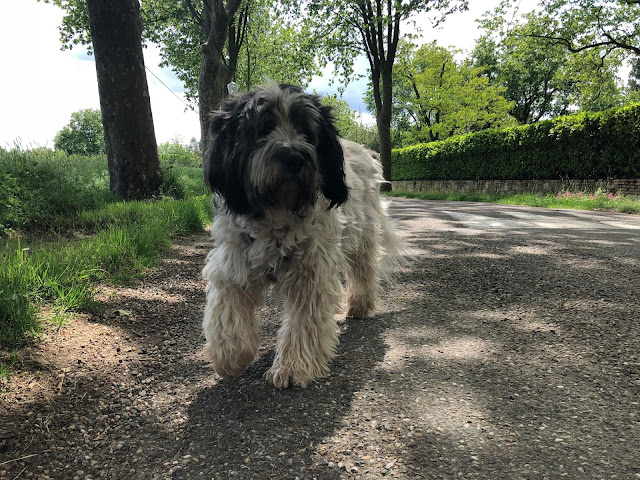 Joan Collins is 82 and is releasing a new album of her greatest hits. The radio plays this as we head off to the river. Her voice really did have a remarkable tremulous clarity to it :https://www.youtube.com/watch?v=BjA3FHAwIfk

The word on the street (or more specifically my cycling group's WhatsApp) is that take up of the second vaccine shot has been low in the less well off areas of Aberdeen, possible reasons being a concerns about the AZ blood clots issue, the vaccination centre being two bus rides away or the fact that people think they are safe and the pandemic over (despite the latest news of a worrying surge just up the road in Elgin).
I await the Scottish election results with interest and some trepidation. Cheers, Gail

I know a number of people eager to get a shot but still too young. If you're that keen, and if the vaccination center has doses and openings on their agenda, then why not get maximum shots in arms? The supply of Pfizer-BioNTech has increased dramatically. Vaccinating those who are eager will help to convince those who are reluctant. Especially when things open up and we have to show proof of vaccination to enjoy them. I might see whether my kid, who would be among the last to be vaccinated, can benefit from one of these don't-waste-the-dose openings.
Joan Collins is a goddess.

I can't understand the reluctance of some people to refuse to have their vaccinations - or the song and dance they make about it. They will make even louder complaints if they catch the virus. I'm pleased to have had both my shots, and to have an "official" piece of paper to prove it! After my second shot I just filled in the necessary info. required online, and in an instant received the completed paperwork, which I've now printed off and am carrying round with me. Apparently I had the Modern/Lonza vaccine, which gives me 98% protection. Not that I expect anyone to ask me for proof of vaccination locally!
Er.... I think you mean Judy Collins, Angus? Joan Collins is a tad older than 82, I think, doesn't sing, and is/was given to wearing huge hair and enormous shoulder pads!

You are absolutely right - Judy it is ! Well spotted .

I think most governments goals is to ramp up the vaccinations and get it into as many people as possible. Appointments are made just to space people out during the day, rather than everyone turning up at once. I've had both Pfizer vaccinations now and am glad to have the protection.

Poor India. It is hard to watch the news reports.