There is no wealth but life. 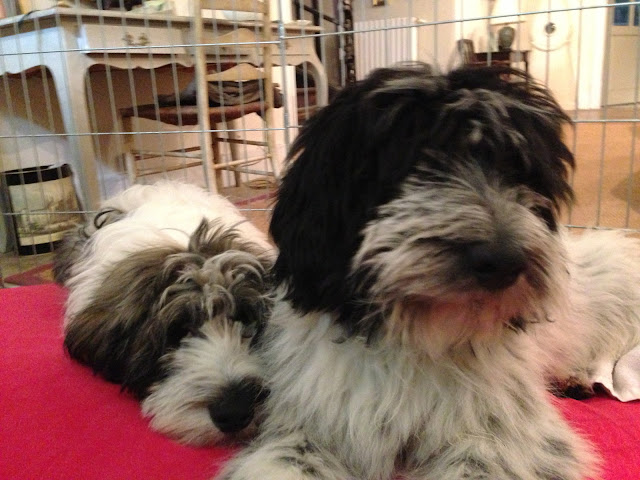 Three dog beds shredded and destuffed. A fourth ordered from Germany. This one carefully avoids saying it's indestructible . Instead the marketing blurb settles for an altogether more reasonable promise that it's ' robust construction can withstand most wear and tear '.

Bob and Sophie perch serenely on top of the new bed. It's come in a rather memorable red. I'd ordered blue but there's a little note in the bottom of the box saying they're out of that colour.

The little angels appear calm and placid but the second my back is turned the mischief resurfaces. The new bed faces the full enthusiasm of two five month old PON's. I'll give it a month before it's shredded just like the others.

A month! That would have been a miracle when Jack was a pup!

Well it is pretty!

Your words of wisdom which begin each blog post have been very uplifting during the past three months of my back pain, surgeries and hospitalizations. Seeing the daily adventures of Bob and Sophie brightens my day!

Thank you Bob and Sophie for helping Gail gain some perspective on my juvenile shredding antics.
Toodle pip!
Bertie.

Back pain ! You're in our thoughts.

You never know, this one may last. At least the manufacturer's comment sounds honest.

ANGUS - really? A month? Have you viewed your second video closely? My guess is it will last (perhaps) the weekend. Greetings from the Westcoast of Canada.

It's made of thick canvas so I'll stick with a month ! But you may be right ...

'The font ' has just given them their morning 'turn down ' service. You were right. The hugely expensive bed has been taken away. ' They're too young for a bed ' the informed decision.

"Can withstand most wear and tear" does not apply to Bob and Sophie.
Oh dear, no more bed for now......

Its hot anyway - better lying on the tiles...
What about getting them sth. to herd - two geese, I could send you a pair of turtledoves who adopted my terrace to do their walk abouts - so Sophie and Bob are occupied for a little while... lol love from Southern Italy Susanne, Daisy and Kiri

Perhaps a bolt of strong fabric and a sewing machine purchased and you could teach the darlings to sew up a new bed every fortnight? Our Tucker - although doesn't destroy his bed - will drag his blankets out of his kennel every other day - just so he can lay in comfort with his pack. Our black lab used to suckle his...

Just put a big old planter filled with dirt in their pen. I am sure "the font" would enjoy the daily mop-up!

As we expected. Maybe spraying the bed with some Bitter Apple Spray might deter them.
Were Wilf and Digby such chewers?

Digby certainly was. He was also a climber. Both character traits Sophie seems to be carrying on .

It's a nice, cheery color. Perhaps Sophie thinks there's a flower pot buried in the stuffing?

The now one year old pup tried the same stunt with our couch yesterday! Cotton canvas seems to incite furious digging in her. There is nothing wrong with using old bath towels for a puppy's bed. Inexpensive, still cushy and no worries if the towel is destroyed.

That "RED BED" may not be long for the world by the looks of the digger-twins antics. Sophie seems to be the leader and Bob the copy-cat! What a fun house you have.
Karen and Kelly Rathje

Perhaps time for a cut down cardboard box (staples removed) filled with some old blankets or towels?

It is a lovely shade of red! Küster is nineteen months old and he still can't be trusted with a bed! The stuffing is out and the zipper is dissected before you can say Bob's your uncle!

And Tucker's got you all beat...3 and still chewing the towels that are in his crate. We've tried the bed a few times...it's gone back up. We might just be selling it and using towels for his life !!

Maybe you should get a towelling bed