Keep your fears to yourself but share your courage with others. 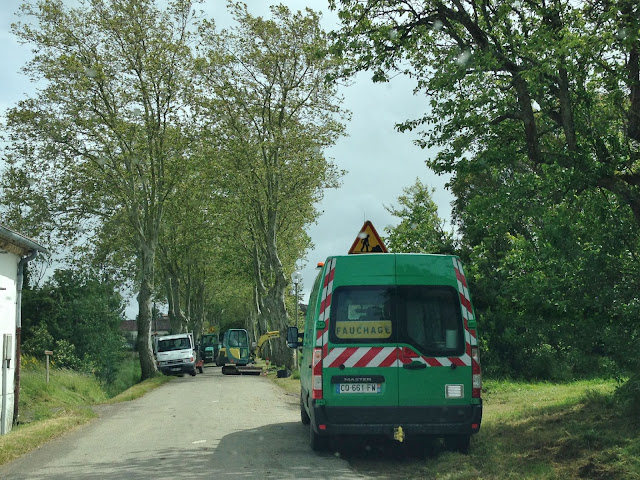 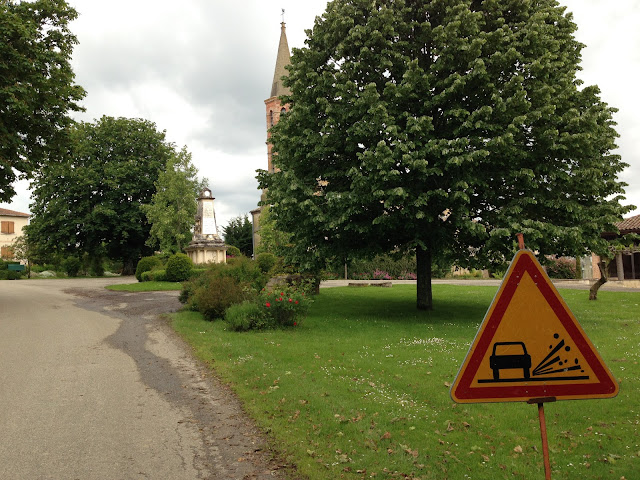 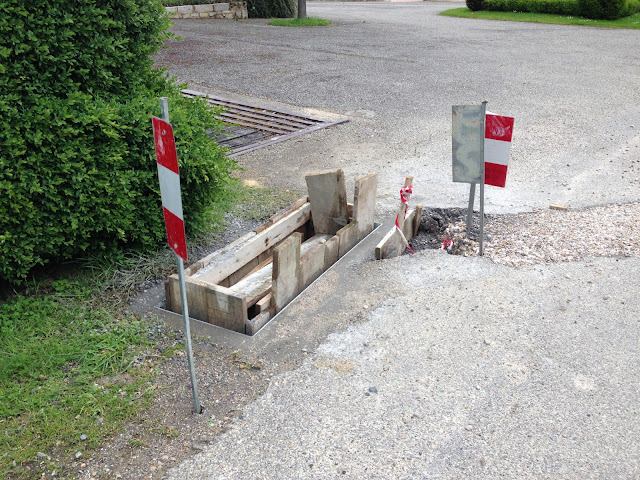 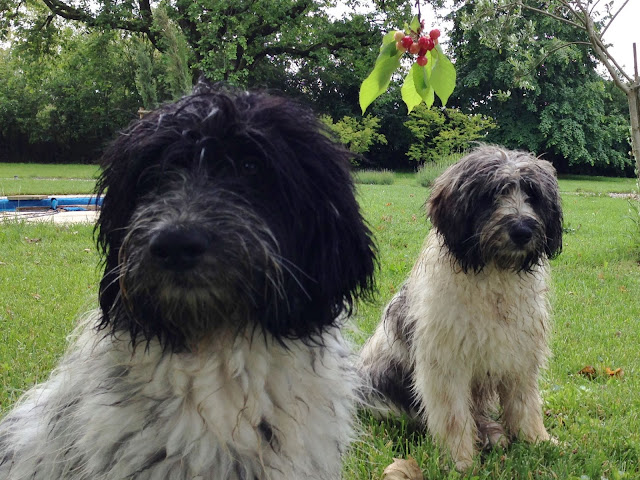 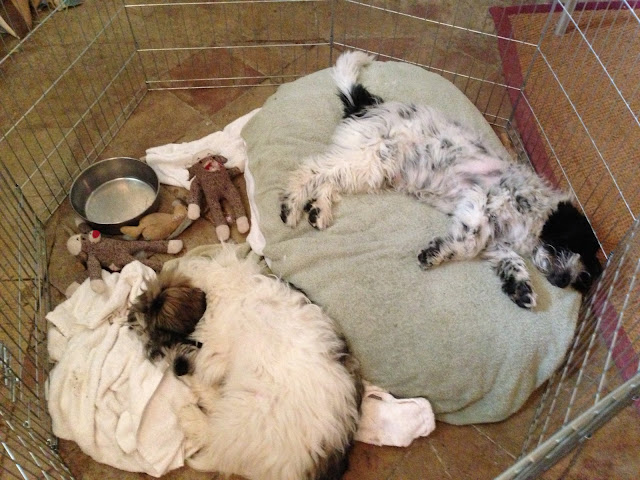 Much excitement. A green tractor, a green van with orange flashing lights and a white truck  carrying a small mechanical excavator  appear. They roll through the village first one way, then the other. The convoy does a 'u turn' at the crossroads and parks opposite the old widows house. A group of chain smoking workmen emerge and  put out roadwork signs at either end of the lane . The cows look at them. Amid some confusion the small mechanical excavator is unloaded. The workmen argue, then go for a two hour lunch break.

In the afternoon the workmen dig a hole . They then stop to examine it. Happy the hole is in the right place a trench is dug. This is then immediately filled in .Warning markers are placed around it. The workmen block the lane with their vehicles.   Around four they pack up and leave.

Bob and Sophie also dig a hole then fall asleep.

Five months old in a week and a half. Today we must go down to the vets to discuss THOSE operations. Sophie or Bob first ? How will we keep  one quiet and recuperating while the other is full of energy ? Is five months the right age for both of them ?
Posted by Angus at 7:31 AM

Them sure is some sad looking wet puppies you got there!

To me Bob has a rather satisfied look on his face while Sophie appears a little disgruntled. Perhaps she is wondering how on earth Bob managed to get even more earth rubbed into his face than she did.

That is a bit of a dilemma about the operations. I say drug them both up with pain meds, even the one who has not been operated on. Just joking. Sort of .

O my you don't want to wait too much longer. I have to make a choise also! love the faces today!

It's going to be a challenge keeping them out of the mud while the wounds from the operation heal...

I know your vet will advise you on the best age and if to do both at once or not, so my only suggestion is to get both Bob and Sophie used to wearing "the cone of shame" (Elizabethan collar) BEFORE they have surgery just in case you need to stop them licking their stitches.

Make it fun - bit by bit get them used to walking around, eating, drinking and wearing one while they have a nap (I look forward to the movies), so they don't get the same shock Riley did the first time he got home from having surgery. He was doubly miserable as he couldn't navigate around the house or up the stairs, or work out how to eat his food. He just froze in place and whimpered, but without it on he chewed. You may also need to have both pups wear a cone at the same time, if your flower pot movies are anything to go by, as I'm sure one will destroy the cone worn by the other given the chance!

'That' operation is often done about 6 months old, but the vet will know by examining them...sometimes it has to wait a month or two further. Could both pups be dealt with at the same time, then there won't be one jumping about and lively to disturb the other.

I like the photo contrast of "Being Naughty" (wet and dirty) and "Being Nice" (sleeping like angels).
Five months old already????
I tend to think that they should both have the operation at the same time, so they can console each other in their misery, and get better together, but the vet will advise you best.
The wonders of the French workmen....digging holes seems to be one of their specialties....or not?
Have a wonderful weekend.

Everyone is right about letting the vets help you with the decision. And as you well know, Sophie's surgery will be a bit more "complicated" than Bob's and will require a different/more recovery time. I would be leaning towards having both procedures done at the same time--They are partners in everything else, why not this too? :-)

One of Merlin's siblings had the op very early. This resulted in her looking quite different to the rest of the litter. She had a perpetual juvenile appearance. The breeder said this was because the procedure was carried out too soon. I would leave it as long as possible, but I do appreciate how tricky this might be, having a brother and a sister.

You'll want to get Sophie neutered before her first heat, which will then eliminate the later risk of breast cancer. You can choose to wait a bit longer with Bob. Some vets wait until 14 months for larger breeds but if you do it now, he'll be less likely to become dominant or have the urge to roam.

Adorable muddy snouts:-). There is some controversy about the age for males, not so much females. Usually around 6 months, though boys can be held off longer. There are also questions about whether the male op really does stop aggression, so it's really more a matter of long term health. Don't think you have to worry about Bob becoming aggressive, though, from what we've seen so far! And you're socializing them so well......

Sophie's recovery will take longer and she will need to wear her surgical collar (" the cone") longer. Be aware that while she has her collar on and she cannot disrupt her suture line, Bob may be more than willing to lick the itchy/ painful surgical area, with her permission, and cause problems.
You might contact Polish Lowland Sheepdog Clubs in various countries regarding all aspects of the surgery. These owners have a wealth of breed specific information that you can then discuss with your vet.
Love to all.

Just remembered what Bertie's very Aberdonian puppy class leaders said about the timing of 'the op' for male pups. That vets only recommend operating early the sooner to get your money!

You guys are so cute!
Mom and I enjoy reading about you!
I love the vet myself. Good luck with your "s-u-r-g-e-r-i-e-s".
Mandu

Right, that sounds good to me.

I vote for getting the procedures done at the same time if that fits into the vet's schedule. Otherwise you might have problems keeping them calm and post op issues.

I learn so much from the comments here -- next time The Collar is necessary, I'll do an adjustment period pre-op. Got to your fourth picture today, wet and muddy faces, and burst out laughing. I was sure you were going to say The Kidz had been digging in the workmen's excavations.

I suggest you'll have both puppies fixed at the same time. Both will need to wear the Elizabethian collars for the time they have stitches (10-14 days) which will be about the same time with both of them regardless of the operation.
If you do it one at a time, you have double the time to watch over the puppies so that the other does not lick the other's wound.

I have had several PONs of mine spayed and neutered over the years: they all are in pain and whining for about a day after the operation and then ready to rock again! Very speedy recovery no matter if it is a bitch or a male!

But of course the vets in different countries have different suggestions and different customs that they are used to. So your vet might say something completely different. ;-)

Majka - Thanks. The vet is keen to see Sophie in mid-June, just after she's 5 months for the reasons you mentioned. We're coming round to the view that Bob will go in at the same time or shortly therefater.

Bob and Sophie are starting to look like grownup dogs! Believe it or not, we read a lot of scientific studies and decided to wait until very late to spay Shyla (14 months of age). Some studies are showing that certain orthopedic and cancer-related issues are less common in dogs who are spayed/neutered later (18 months is a common recommendation now). We were very lucky, because Shyla did not have a visible heat prior to being spayed (although our vet thinks that she had a "silent" heat, meaning that it was not perceptible to us or to other dogs).

I wouldn't recommend waiting for everyone (the risk of puppies is the main downside, imho)but my research gave me the courage to wait until later with Shyla than we'd ever waited with any dog.

I don't know if it's true there in France, but here in Colorado, dogs are most likely to go into heat around the equinoxes (March 21, Sept 23). We timed Shyla's spaying to avoid a March heat...

Had two done at the same time, and after the first day....that 'keep them quiet' was hard to enforce!

Love that photo of the muddy pups.

Oh those muddy, lovely faces! We had that for the past 2 days - solid rain, wet, muddy paws and snouts. Lots of laundry.

We told all our male dogs when it was "time" that they were going to get tutored. Fooled them every time!