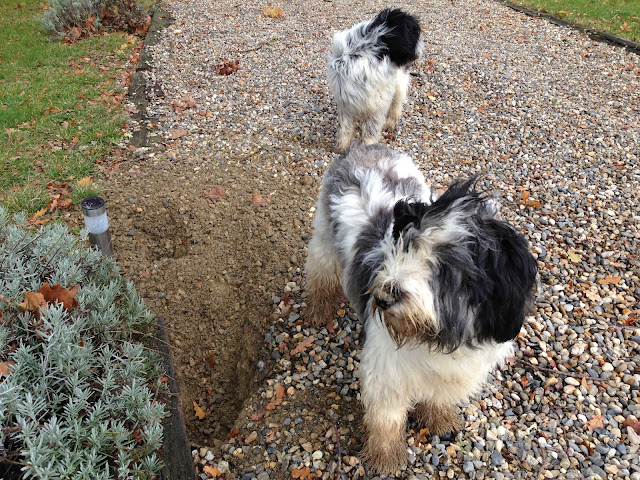 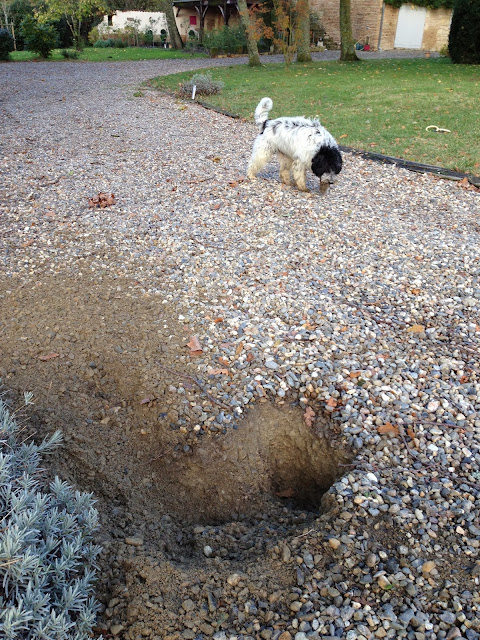 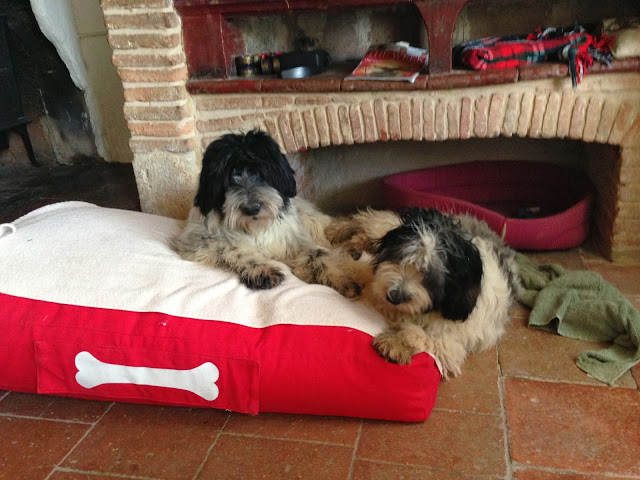 Sophie digs a hole. I go to the barn, get a spade and fill it in.  An hour later Sophie re digs it. This time it's in a slightly different place and noticeably deeper. Angus mutters something immoderate while he fills it in for a second time. The little angels are then banished to the upstairs kitchen where they can do least damage.

50 years since President Kennedy was assassinated. Another of those '' where were you when ? " anniversaries.  The memories of an eight year old. A young American exchange teacher silently weeping when he heard the news.    ( Memorable because it was unheard of for male role models to show emotion in that decidedly pre-modern age ).  Newspapers edged in black. Solemn music replacing the scheduled radio programmes. The headmaster calling us all together and quoting the line 'From this day to the ending of the world ...it shall be remembered '.

Maybe Sophie is just looking for the perfect place for a hole--one you will leave alone.

In French class 50 years ago.

I was even younger than you. I don't remember the assassination (I was 6), but I do remember the black and white pictures of the funeral on the TV. A funeral flame? Jackie Kennedy looking devastated. Nothing at school. Were you at school in Scotland?

The bed PON resistant ? Only as long as someone is supervising them to make sure the holes they've already chewed in it don't get any larger !

I was a wee girl (2 years old) when President Kennedy was assassinated....and therefore have no memories of that day. However, I've viewed many documentaries that make me feel as if I were there on that day.
What a poignant picture you have painted with your male teacher shedding a few private tears when he heard the news.....enough to leave an impression on any young child.
What is leaving an impression on me today is the size of Sophie's holes....how long does it take her to make a hole that big? Furthermore to save your sanity, you may as well put the spade away for now....smile.

I was 10, in 5th grade. The memories are vivid. Looking back on that time I now realize how insulated we were from violence, now we are exposed to it every day. I would go back to the simpler times in a heartbeat when the bad news wasn't blasted at us from every direction in what seems like a daily or weekly basis. On a lighter note, it's probably not too late to rename Sophie, does Digger fit? What characters your little guys are!
Karen & Kelly Rathje
Iowa USA

I was 22 years old when I cast my first presidential ballot for Kennedy. He made young people feel important to him, something that older politicians really didn't do. Then I was 25 when he was assassinated. I was working in a tire store and one of our employees came in with the news. What a dark day! I still have trouble believing in the results of the Warren Commission and suspect it might all come out one day.

I was in Athens having dinner with an English friend. Someone burst into the restaurant and said "Bang! Bang! Bang! Kennedy!" The bartender explained what had happened. We left the restaurant in shock and found almost all of Athens outside with newspapers being hawked on every corner. The next day, I rode a bus to the American Embassy to sign the condolences book and everyone in the bus, realizing that I was American, came up to me to say how sorry they were, as if I were a member of the family. To this day I still remember the Greek word for assassination.

I had just been picked up by a friend from my last class of the day. we were silent. the radio our only connection to what was happening.
I asked him to take me straight home. my little grandmother met me at the door . . . tears streaming down her face. "oh tammy. he was so young."
then I stayed home the next few days and watched everything on television. and finally the tiny salute of three year old john junior.

Nancy at the Farm said...

I was in second grade at Wasco Elementary School in Illinois. Mrs. Etherton, my teacher, came in with the Principal. She was crying and Mr. Peterson told us we were to get our coats and satchels because the bus was outside to take us home. He said the President had been shot and had died in hospital. We were pretty young to get a firm grasp on the situation but I remember coming home and sitting in front of our black and white television with my three brothers watching Walter Cronkrite's runnning news on the situation. Every channel was the news. And there was an awful silence that hung. When we went into town from our farm the quiet was deafening. People just went about their daily tasks but almost by rote, no talking, few conversations. The sidewalks were pretty much deserted. What could anyone say? We could do nothing but cry. I remember my father saying very quietly, "It is over and this was the best we had."

I've read only a few of the commentaries and have avoided the teevee this week, but your small paragraph about Kennedy's death brought me to tears. In context, all these years on, it's intermingled with the later losses of Bobby and Dr. King. I still think that if Bobby had lived, the world would have been much changed for the better.

I was in 3rd grade in elementary school in Ellicott City, Maryland. Our classes dismissed early and I can remember the school bus being so very quiet. I went home and told mom what had happened and she told me, That's a horrible thing to say! She turned on TV and discovered that it was unfortunately true.

I was a very young (18) US military bride living in a small village in NW Germany. One of a handful of young Americans who had been assigned to a small German airbase. We had taken a German soldier to Hamburg to visit his family. As we were going upstairs to their apartment the father came out and called out that "Kennedy ist tot, Kennedy ist tot". I will never forget those words. We went in to watch on German TV not understanding what was being said. Innocence was lost that day. In the days following the villagers left flowers, notes, food outside our door knowing that Americans lived there. Such kind gestures.

i remember the day well…i was 3 years old and remember my mother crying on the phone and the bulletins on the TV…
what is it with mud and dogs?!…:)
xoxo

My mom often talks about sitting in school and hearing the news, too.

Perhaps Sophie knows a secret that you've yet to discover...

Its been interesting to read your recollection and the comments for this post about the day JFK was assassinated. It has of course been on the news here all day and on the news this evening they are showing the thousands of people who braved the freezing rain to attend the ceremony at Dealey Plaza. I was only two years old, so I do not remember it, but of course remember my parents telling about it--I truly was/is a very sad day in American History.

On the flip-side, glad that dog bed hasn't become history--Yet!

6, living in Harpenden. I just remember overwhelming sadness at seeing so many people devastated. A terrible day.

Have you tried burying a balloon in the hole and leaving it as a partial hole to redig.
Good luck

Interesting to read where the others were at the time of Kennedy's death. I was 6, in first grade in a Catholic school, in a town right outside of Boston. I remember watching the funeral and the drums. Every time hear funeral drums, it takes me back to that day. I felt sorry for Caroline, we were the same age--and I wanted a pony called Macaroni !

PS--The 3 year old terror--oops terrier--has managed to chew his bed too. I'm waiting for him to unstuff it !!!

I'll be forty six next month so no memories of the day for me but I have to say I have felt a quiet solemnity reading your memory and all these responses, but along with the sadness there is also something hard to define that feels sort of special and very respectful reading all these simple but profound memories.