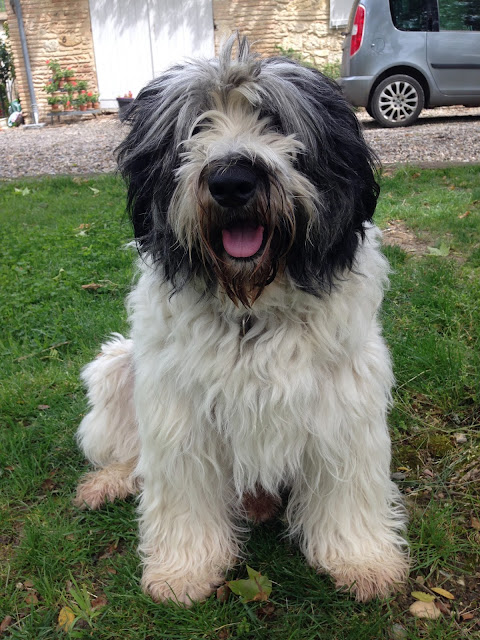 Sophie's morning starts well but after charging round the garden the bad hair syndrome soon manifests itself. 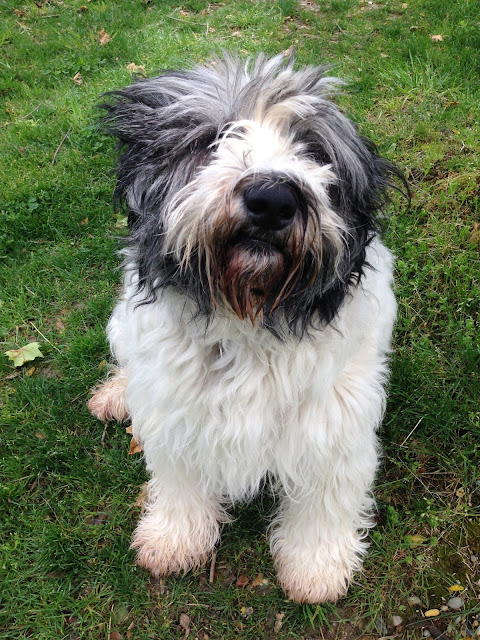 Monsieur Bozo the drainage engineer appears at first light. He brings with him an enormous truck carrying two large green septic tanks. A smaller truck and a mechanical digger complete the convoy. The drainage work was scheduled for September last year but has been repeatedly delayed by an ever more creatively apologetic Madame Bozo. 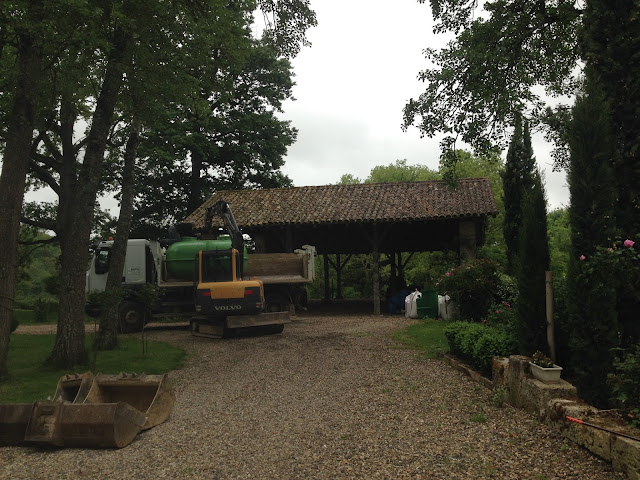 Three centuries of French plumbing have gifted The Rickety Old Farmhouse with a 'reflux' problem.Once or twice a week, in the small hours, Angus wakes to an olfactory assault. Some assaults are pleasant. Many are interesting.  All can be traced to the large eighteenth century drainage cistern under the house.

'The Font' finally suggests that the plumbing be attended to. The words ' don't prevaricate ' and 'modernize' are used. Monsieur Bozo and his team of morose lads are called, provide a somewhat vague quote, and in the lack of any alternative drainage specialists - are contracted.

Bob and Sophie find all of this activity intriguing. They carefully monitor the morose lads, who true to form , stand in the flower beds smoking. The next two weeks can only increase the PON duos excitement - algorithmically.

Monsieur Bozo surveys the site with the air of someone for whom cost is no object. ' Don't worry M'Ongoose. I think we'll be able to save some of the roses '. It's a Friday so he and his team are gone by lunchtime. Monday is a holiday. They expect to be hard at it on Tuesday. '' Shouldn't be here more than three weeks " he adds before disappearing. 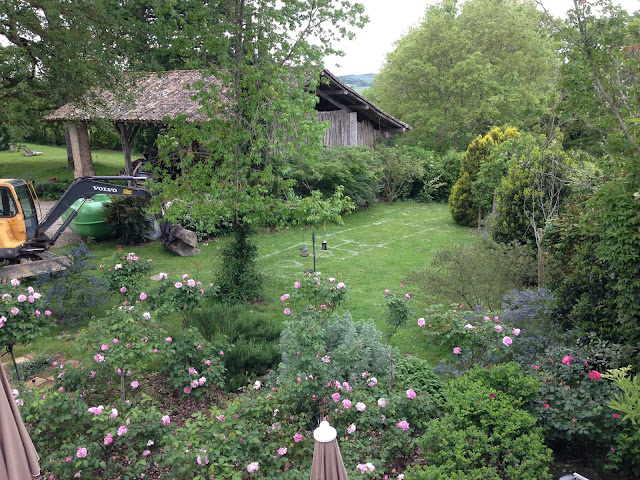 White chalk markings have been drawn out on the small area of lawn behind the barn. This presumably is where the excavations will start.

What could possibly go wrong ?

Oh Angus - that last sentence - don't even think it !
Three weeks to do the job? Did you find out which three weeks - as in... a) do they follow on consecutively b)work a week, go off somewhere else for a specified/unspecified time, c)one week in the next three months or d)random days making a total of three weeks?
When we had our new kitchen fitted we were told it would take three weeks, but were naïve, and didn't think to ask which three weeks ! It turned out to be three weeks (odd days and almost, once, a whole week) between July and October... August, as you know, is a holiday on most of the Continent....
Wonderful games of Throw the Furry Fox on the horizon !

Oh my! I shutter to think what could possibly go wrong!!!

We're getting our snacks ready for three weeks of 'computer theatre'.....sorry.

I suggest that a few cases of Pauillac might dilute the "challenges" that lie ahead!

This doesn't sound good. Not good at all.

We live beside the Dordogne river and occasionally get that odour of burst drain. We are told "It's just the way it is". Not sure if this is true but the mairie workers seem to be always digging up small sections of pipe under the streets. Interesting how the french don't appear to be bothered by it. Bonne chance with those three weeks and perhaps it would be a good idea to relocate your rose garden for this summer....just a thought.

What could possibly go wrong when you hire someone with the name Bozo? Hope there's not too much clowning around! ;)

Angus,I predict you'll be the one with reflux before this is all over.

Get a "siphon" on your drains. It will keep the sewer smells from rising. Though emptying the cistern probably wouldn't hurt--as long as the lack of water doesn't make it cave in (happens with emptying pools).
Our village's salle polyvalente reeks of sewage every time the wind is marin. Makes the exercise class more challenging.

"I think we'll be able to save some of the roses" was a red flag for me. The chalk lines are ominously close.

It's Sophie's insouciant expression that just completes her touseled look in the second picture.

Best wishes on the project. I've read a few hilarious accounts by ex-pats about house projects. Keep an eye on those guys so they dig only in the right place!

looks to me like they are preparing to dig their own grave! Hope not, but you better count heads at the beginning and end of every work day!!

I wish you the best on this project...what could possibly go wrong with Monsieur Bozo in charge?
I know Madame Font will keep her eye on the proceedings....I am with her on this one....don't prevaricate!!!
Hang in there.

I will be hoping that your beautiful roses are the only casualty.

I think what worries me in all this is the "vague quote".