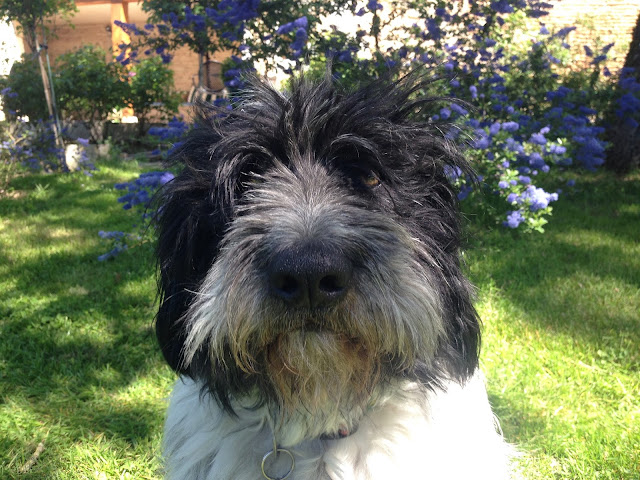 Bob is blessed with hair that always falls into place. 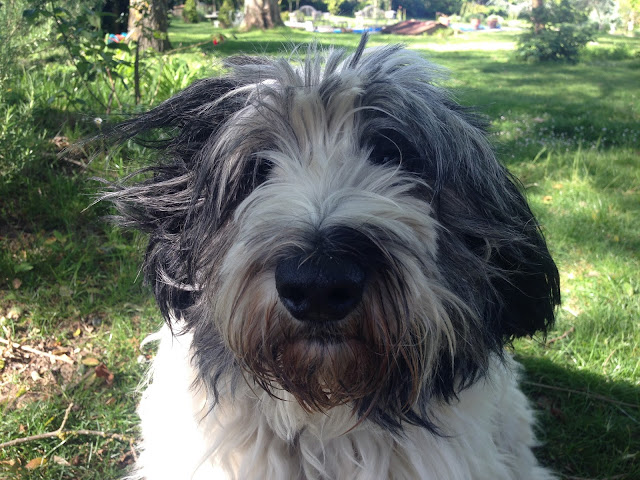 The wild boar are arguing in the woodland along the lane. The sound gets louder. Bob is harnessed up . 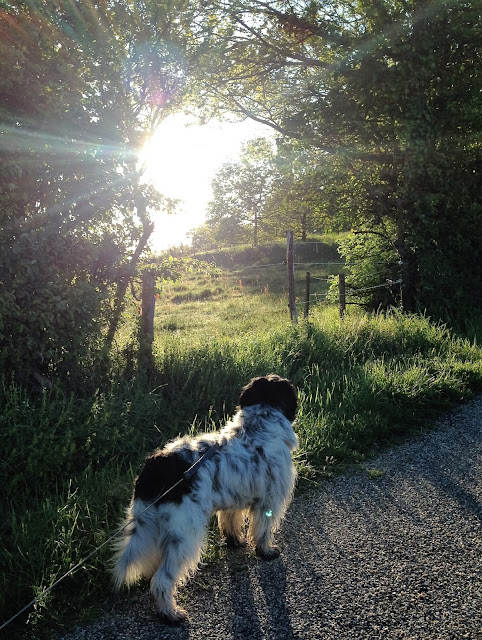 After that it's a day for lying in the courtyard, sitting on the stump seat, barking at passing pilgrims ( the creaking statue has attracted quite a following amongst those who set a low threshold for miracles ) and playing Throw The Furry Fox.

The mayor stops by to tell us that the Belgian lady has taken to 'flipping the finger' at her horse farming neighbours. In case we haven't understood he demonstrates what flipping the finger is. In the slightly embarrassed silence that follows 'The Font' asks '' Are you sure ? ". ' Oh yes! Quite sure ' he replies. For good measure he then demonstrates again. An even more embarrassed silence follows. We now know what 'renversant le doigt' means in French. The mayor doesn't give his opinion about the bright yellow colour the Belgian lady has started to paint her illegal breeze block wall. 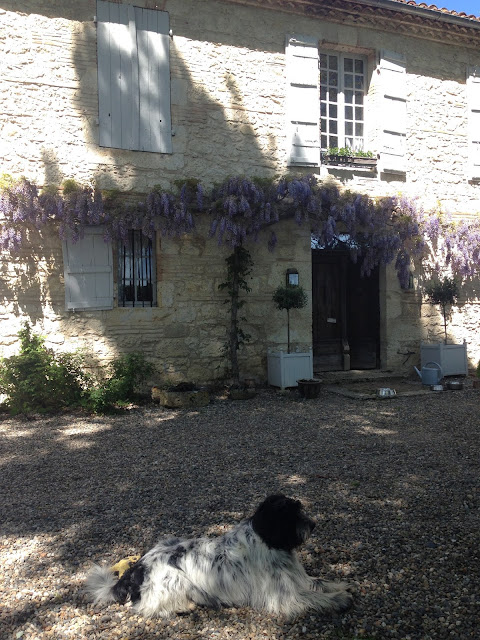 Another type of strawberry joining the Gariguettes on the market shelves. Those little things that mark the passage of the year. 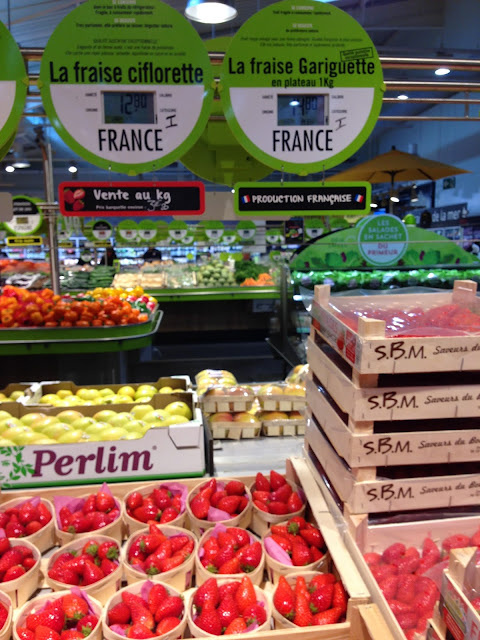 And here's something interesting or as interesting as a company press release can be. In an attempt to safeguard the privacy of its citizens, Monaco, the playground of the rich, is banning drones. It's even installing a system to shoot them down. http://www.aveillant.com/news/aveillant-radar-selected-worlds-first-complete-civil-drone-protection-system-monaco/


And a last minute addition about deaths in American hospitals. Cheerful reading . https://www.washingtonpost.com/news/to-your-health/wp/2016/05/03/researchers-medical-errors-now-third-leading-cause-of-death-in-united-states/

There are an awful lot of people out there who set a low threshold for miracles, Angus. It looks as though your little village will have a busy summer. Now if Bob has any sense, he'll persuade a few of those lost souls to a game or two of Throw the Furry Fox !

This sceptic had to laugh at the phrase "those who set a low threshold for miracles"!
Cheers, Gail.

Where he's sitting, Bob looks like he's wearing a splendid May crown of ceanothus! His eyes are saying "Must I wear this, really?"

I am grateful we have no arguing wild boar! However, we have been warned to be on the look out for an abundance of copperhead snakes. It seems that our warm spring has brought them out early. Several curious dogs, on their leashes, have already been bitten. The miracle is their owners got them to their veterinarians in time!

The picture of Bob looking into the sun is very beautiful. Somehow the close at hand snarling of angry boar doesn't seem a fitting accompaniment.

I like the article about Monaco banning drones, it is creepy how they are used to spy on neighbors, etc. And I heard about medical mistakes being the third highest cause of death in the U.S. Yikes! Why is that Belgian lady mad at her neigbhors, I love horses.

Creak rather than speak.

The little lady in the purple hat has much to answer for ....

In Italy I once found a previous generation of PONs arguing with an enormous adder. The adder was dealt with and the PONs banished inside. A large glass of Gods amber nectar was consumed afterwards.

the mild spring has meant the boar are everywhere and fractious.

The horse farm appeared on the other side of the lane overnight and she's never forgiven them for intruding on her patch of paradise.

A lovely post today, although I rather wish you had somehow gotten a video of the mayor demonstrating his digital skills.

The low threshold for miracles is rich! It reminds me of a skit on Saturday Night Live, with "Father Guido Sarducci," who said: "To be made a saint in-a the catholic church, you have to have-a four miracles. That's-a the rules, you know. It's-a always been that-a. Four miracles, and-a to prove it. Well, this-a Mother Seton-now they could only prove-a three miracles. But the Pope-he just waved the fourth one. He just waved it! And do you know why? It's-a because she was American. It's all-a politics. We got-a some Italian-a people, they got-a forty, fifty, sixty miracles to their name. They can't-a get in just cause they say there's already too many Italian saints, and this woman comes along with-a three lousy miracles. I understand that-a two of them was-a card tricks."
BTW, my husband, who is quite an expert on "gros mots," calls it "le doigt d'honneur."

I think Sophie looks adorable tidy. It's poor Bob that looks tousled.
I could tell you a little about that third leading cause of death. Errors at all levels. And it will only get worse.

I need a large glass of Gods Amber nectar just reading about your encounter!

Sophie must sleep on her right side.