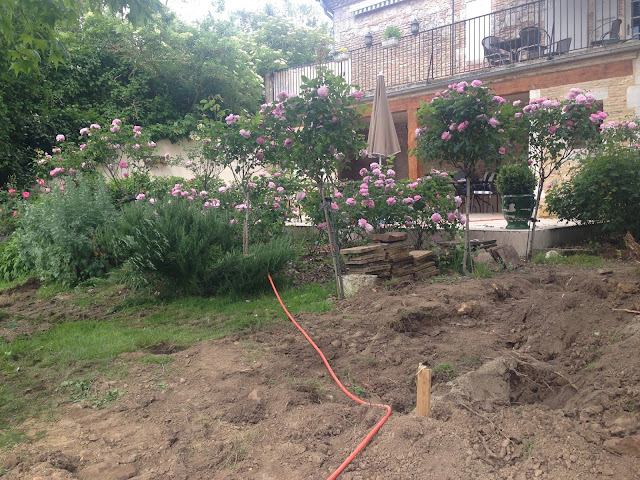 We're without water ( the mechanical digger has ruptured the pipe that leads up the hill from the lake ).

The pipe that feeds oil to the boiler has also been inadvertently severed. '' No need to worry M'Ongoose " says Monsieur Bozo. '' Your hot water should be back this evening ".

A morose lad drives a truck into the metal gates on the driveway. The gates no longer close.

On a more positive note the irrigation system has been repaired and reconnected to the well so that the transplanted roses can be watered.

The Bozo family is big in drainage. One branch installs new drainage systems. The other branch empties existing ones. Mid morning we're joined by this second branch of the family. Two enormous orange lorries park in the courtyard. More morose lads appear. Tubes are inserted into the septic tanks and the pumps are switched on. Regurgitated odours sweep the air. Bob who has never widdled indoors, widdles indoors. Some smells just trigger those sorts of reactions in even the best brought up of boyz. 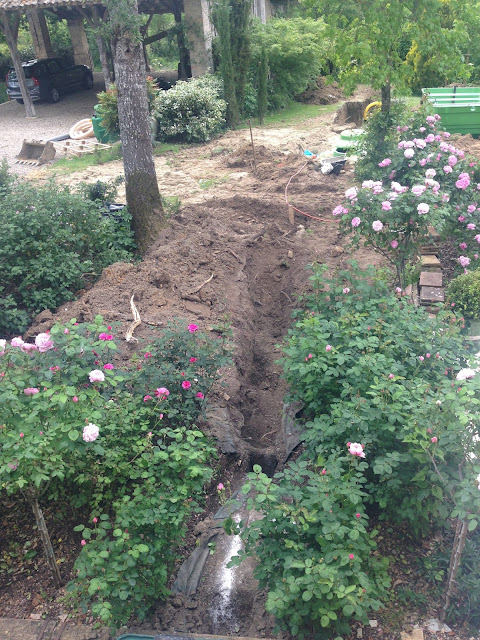 In the rose border a trench is excavated so that the pumping machines can access the ancient fosse septique under the terrace. 'This holds more than my trucks can carry ' says a Bozo brother authoritatively. He then adds ' We'll need to come back tomorrow '. 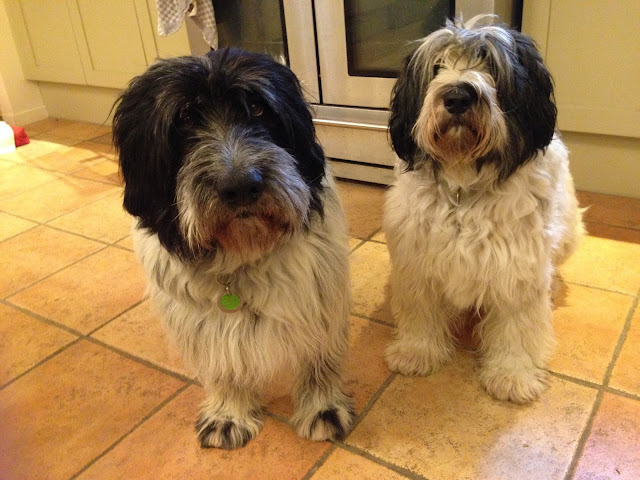 Bob has developed that unmistakable  ' Is everything alright ? ' look. 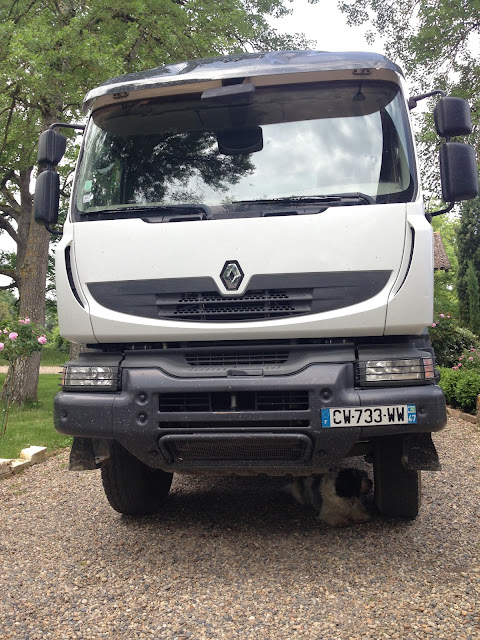 Sophie takes an executive decision and disappears under a truck for a nap. 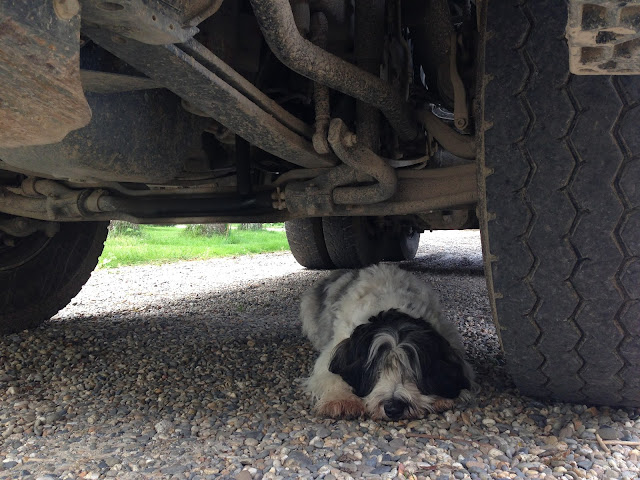 Sometimes even the most independent of girls needs somewhere quiet to gather her thoughts.

Oh Angus - you all have our heartfelt sympathy - we've been there too, and got the T-shirt ! The whole thing sounds like something from a "Carry On" film. Make sure the morose lads check very carefully under their vehicles before driving off.

Have you considered moving out for a couple of months?

Oh my lfe! It all sounded so straight forward when the plans were outlined last week....but my 'spidery senses' were twitching even then.
Wishing you swift reconnection...in all areas x

Why did I know this would happen?
When our pool was dug, we discovered many things. A three-inch thick layer of tarmac, then six inches of gravel, six inches of dirt, and another three inches of tarmac, followed by gravel, etc. Way down deep, they ran into a buried electric cable, about two inches thick. Looked serious. Calls were made all around to find out what it could be. Finally, our crazy neighbor declared he would cut it, and that would provide answers (he spent decades as a project manager on roads and bridges in Africa, so I guess he thought this was nothing). He was right--it was defunct. There also was a strange pipe. Turned out HIS water came off the street, turned right sharply for a detour through our yard, then passed to his property. He was the one without water for a while, until the pipe got diverted.
You, too, will one day wake up from the nightmare that is Bozo Drainage, and it will all be done and the grass and roses will have grown back. One day.

It's a good thing you have a sense of humor

Additional wing on the Bonzo home in St. Bart's.

Brave souls.
I know I have to steel myself for the very same disruption, sooner rather than later. I watch with interest and send happy thoughts.
x

Oh boy. Never a dull moment is there?

I know I should be issuing words of sympathy, or at least consolation. Instead, I am wiping the tears from laughing so hard.
Like so many others, been there done that.

I am in the middle of 'done that' !!! When I look at the above pictures the same question comes to my mind: ' why must there be so much destruction, in order to repair something?' I am so very sorry that you must endure all of this upheaval.

I hope the morose lads somehow managed to fix the gate so that it closes again. I would hate for Bob and Sophie to wander off outside....we don't want the same thing happening to our favorite PON's like the teacher's dogs.
Please make sure Sophie comes to no harm resting under the truck especially if it's the one that is already filled to capacity and the driver wants to make a speedy departure.
I feel your pain.

It's all part of the French experience....

Perhaps you should employ one of those archaeological cameras that survey sights from the air, BEFORE your next project. No telling what else you may fine....