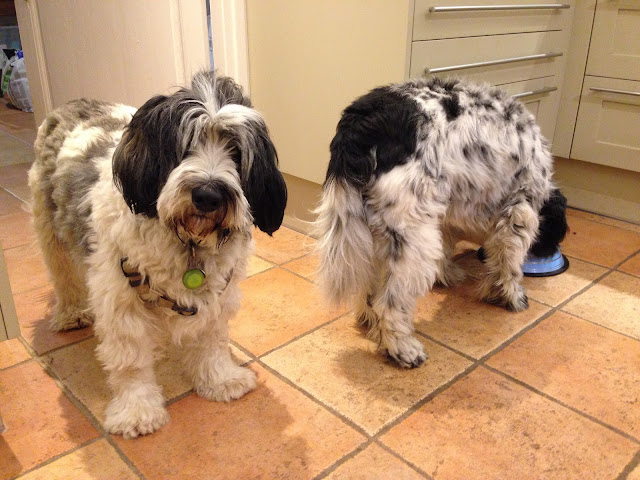 Sophie wolfs down breakfast. The family diva devours her meals in the style of a stray dog that's been given a ticket to a Las Vegas '' all you can eat " buffet.

She then waits for her brother to finish his kibbles. Bob, aware of his sisters impatience, eats slowly. Very slowly. Sophie fidgets. This makes Bob eat even more slowly. 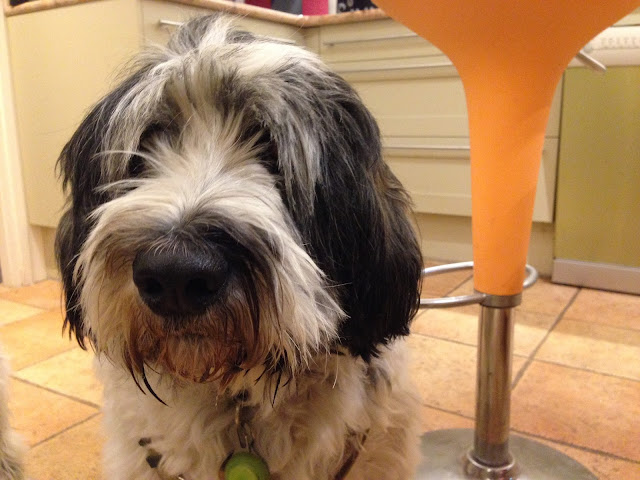 Outside the village hall twelve of the fourteen spaces set aside for election posters have now been filled . 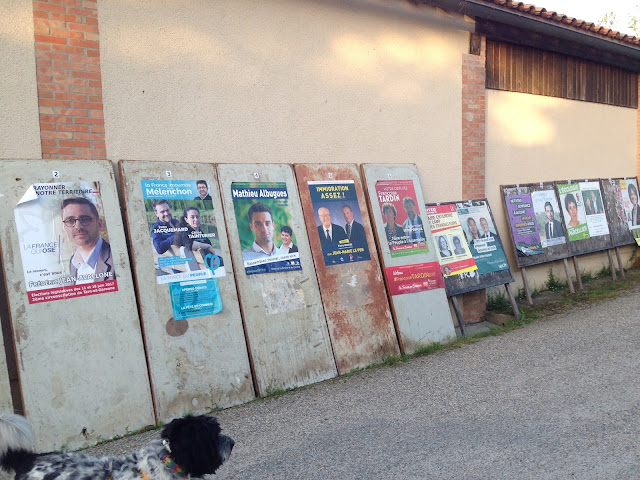 The latest addition a poster from the Pirate Party. ''Don't trust anything'' its decidedly downbeat message. 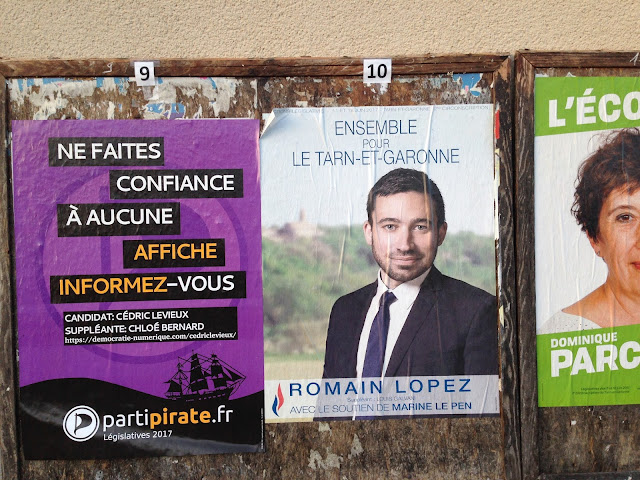 After this nihilistic start to the day it's off to the bakers with the PONs. 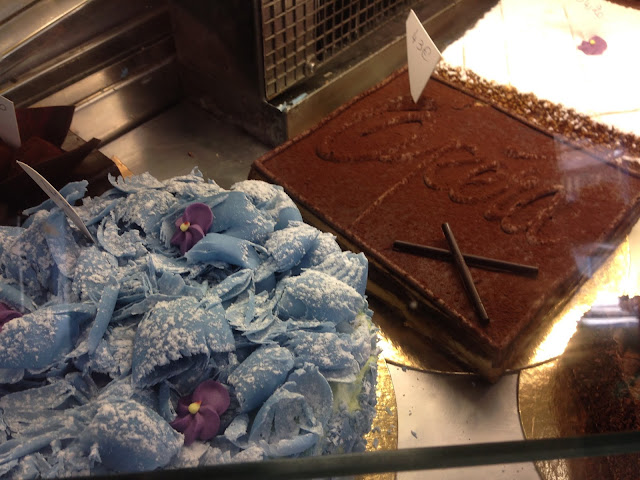 There is a choice between a large blue thing and an Opera.

We choose the Opera. Bright blue things are best left to children's parties. 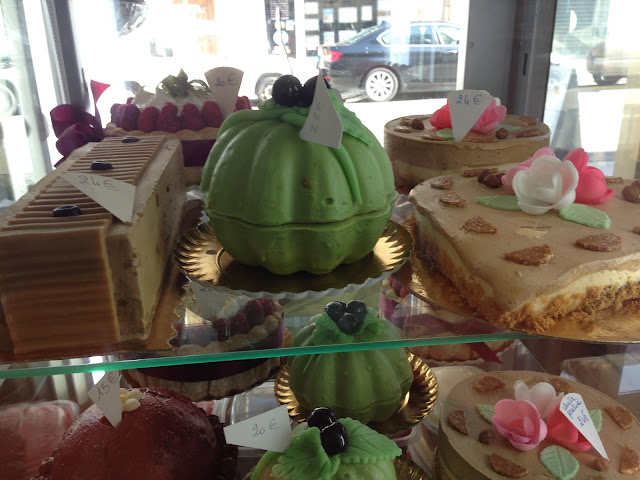 On our way out we notice a collection of coffee gateaux and the bakers summer specialty - melon cakes.

We promise the baker that we'll return for a melon cake on Friday.

The PONs get croissant slivers.

For Bob and Sophie this is turning out to be quite possibly the best day ever .

What would Bob do if Sophie "helped him finish his breakfast"? Eat quickly or necessitate a trip to the vet for Miss Sophie perhaps? That large blue thing looks lethal - I'll betcha the tykes would be high for hours after a slice of that!

Sophie, about the eating business, Gail tells me that brothers can be deliberately irritating, and you just have to put up with it.
Toodle pip!
Bertie.
PS Never trust blue cakes.

In 4 1/2 years we've never known Bob growl at Sophie. He simply ignores her and if needs be sits on her. Sophie, by contrast, turns into a shrieking dervish if Bob so much as looks at her yogurt pot.

Oh we had a pirate party at the last federal elections. It was about privacy and copyright or something along those lines. Don't believe they won any seats. I may have have given them one of my votes. We had to choose five parties in order of preference or something along those lines. Once the early preferences were allocated, they seemed as good or better an option than many of the alternatives. And they had a great name!

We were going to tell you about our Pirate party, but Heda (above) said it all. We're thinking Bob may have passive-aggressive tendencies.

The blue cake looks like it might be violet flavored--a specialty of the Toulouse region. I haven't gotten on that bandwagon.
What, if anything, is inside the melon cake? Years ago, I made a pinata cake, which was filled with candy. Not easy but it was a big hit with the tykes.

Oooh coffee gateau - definitely !
One can't blame Bob for deliberately taking his time in front of his impatient sister.
If there are fourteen candidates and each has only one vote from each of the 67(?)souls in your little village, however does any party win ! Do they battle it out with fisticuffs behind the Village Hall, after the results !

Gosh I am so jealous of all the cake you buy. Opera is a fine choice.

Bob and Sophie have quite different temperaments and manage their meal times well.

That blue thing is frightening.

The melon cake is fascinating. One vote for the blue creation at least being very pretty. I wonder what flavor it is.
“Don’t trust anything” seems a rather defeatist philosophy, especially for one seeking election.
But then people seem charmed by shallow clichés now.

It's so easy to fall in love with Bob. And Sophie,too for her comical ways.

Perhaps the Pirate Parry expects to be trusted by the iconoclast fringe ?

Agreed! They are a lovely pair and I love how they interact, plus I loved when Angus said Bob never growls at his sister.

Maybe it's a boy/girl thing.
Edward and Apple eat precisely the same.
xx