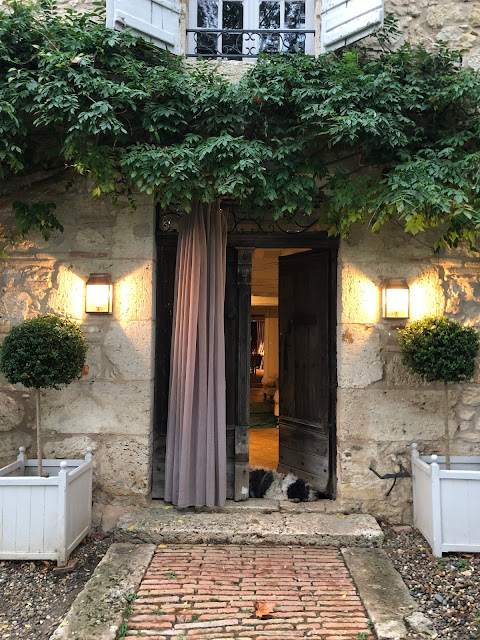 The builder glides past in his large, new, shiny, all electric Mercedes van. He stops to say he's not forgotten us.  ' I'll be along in October M'Ongoose to finish off the work ' . ' Finish off ' is a glorious  and imprecise understatement. What he really means to say is ' I'll be along next month to put up the pergola that I promised to have completed in April '. M'Ongoose bites his tongue. Better late than never. 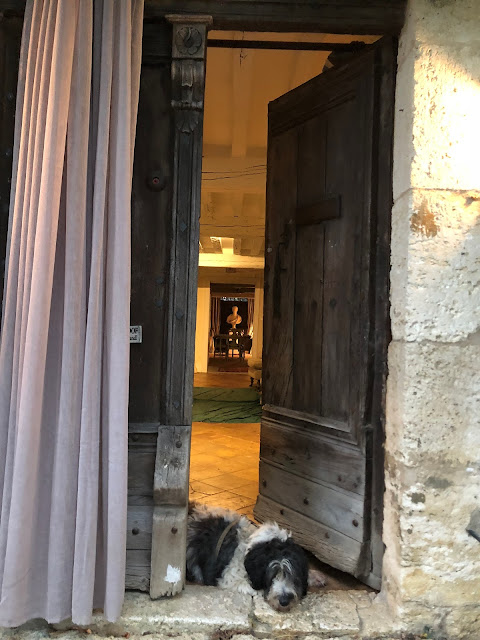 Towels are laid in the hall for Sophie to lie on. She ignores the towels and opts to position herself at the front door, nose out, rump in. Soon, as the temperatures fall, she'll be ushered inside but for the time being this is her favourite spot.
The old mayors grand daughter comes to the front gate to borrow two sets of stepladders. She slings a plank between them and is soon six feet off the ground trimming the ancient yew in the churchyard. You'd think there might be health and safety issues involved with a solitary young woman working six feet in the air , in the rain while trimming a yew with power shears. If there are she's oblivious to them. She waves as we pass on our morning walk. Sophie is delighted to discover that after the overnight rains the little stream is once again gurgling gently. 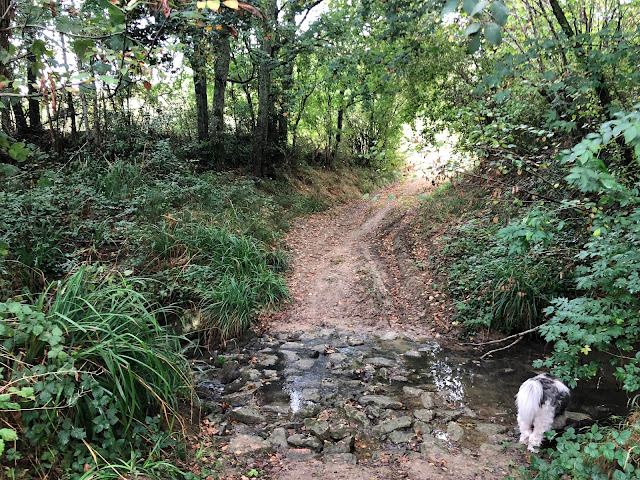 The gardeners return to finish off the laurel hedge along the lane. Much of this was trimmed on Saturday but for some reason the final 10% had to be left until this morning. M'Ongoose again bites his tongue.
'The Font' heads off to the local charity dog pound with old towels, poo bags, treats for the canine inhabitants and a cheque . These are all gratefully received. The cheque is particularly welcome. It is for the amount we've saved by not dining out over the last six weeks. A pandemic bonus.  'The Font' is better at going to the dog pound than Angus who would invite all the inhabitants  home. 16.000 dogs are abandoned every year in the UK. In France that number is close to 200,000. The dog pound ladies are saints. 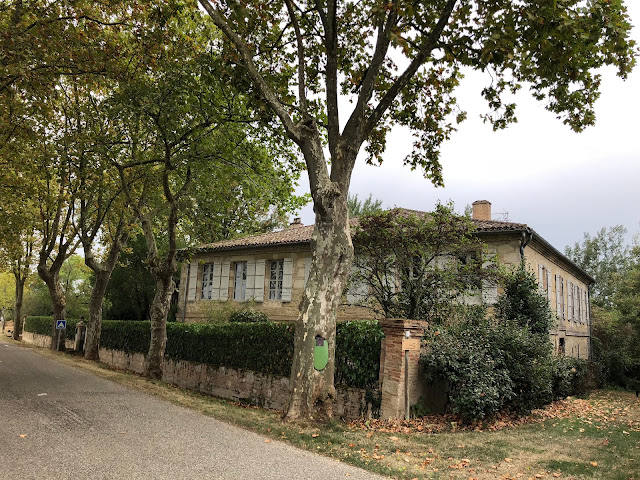 This is interesting . You may need to click twice: https://www.reddit.com/r/MapPorn/comments/iva65m/population_density_through_the_years/?
Who remembers film for cameras ?:https://leejo.github.io/2020/08/14/the_market_for_discontinued_film/
Posted by Angus at 6:32 AM

Sophie looks like she's posing for a Christmas card in that first shot today - it's a lovely, welcoming photo. Cherry would love to lie with her head out the door to our apartment so she could bark more effectively at the delivery men and the man with the vacuum, but I don't think it would be practical. Interesting links again today. My daughter took a course on photography last semester, and the historical section was striking - each new technical wave just wipes out the old one, from the Daguerreotype to film and now to digital cameras on our phones. I wonder what's next? I pulled out an old box of negatives I have stashed away, as she had never seen one.

Well done The Font for helping out the dog pound. TUnfortunately there are predictions of a spike in dog abandonment in the coming months when people who acquired a pet on impulse during lockdown tire of the responsibilities of dog ownership.
Thanks for yet another fascinating map link. I watched with interest how Oklahoma filled in in the 1890s when oil was discovered and so territory previously thought of as useless and designated 'Indian Territory' suddenly acquired a value to the white man...

I am not allowed in a pound. In face, without my husband, I could become a dog hoarder.