Not much to report. Loic the heavily bifocaled gardener comes to blow leaves. He is followed round the garden by a PONette that loves to roll on her back  in his carefully constructed leaf piles. Loic is oblivious to the chaos unravelling behind him.

A black C-A-T has taken to sleeping on a bench on the downstairs terrace. When Sophie heads out into the garden for her start of day comfort break the black C-A-T scurries away over the garden wall. Sophie seems to be completely unaware of the C-A-Ts presence. This has been going on for two weeks now  which makes me question my canine companions credentials as a guard dog.

The man with anger management issues has been on holiday to Spain. 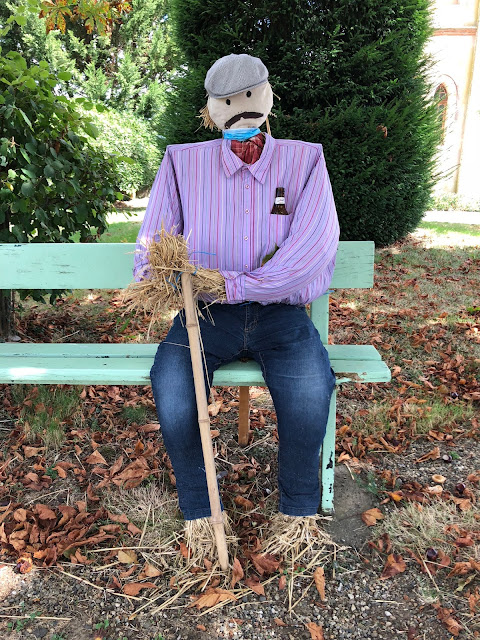 This morning I notice that the scarecrow on the bench outside the church has a bottle of  San Miguel Spanish beer in its shirt pocket. Seems like the anger management man has a sense of humour. 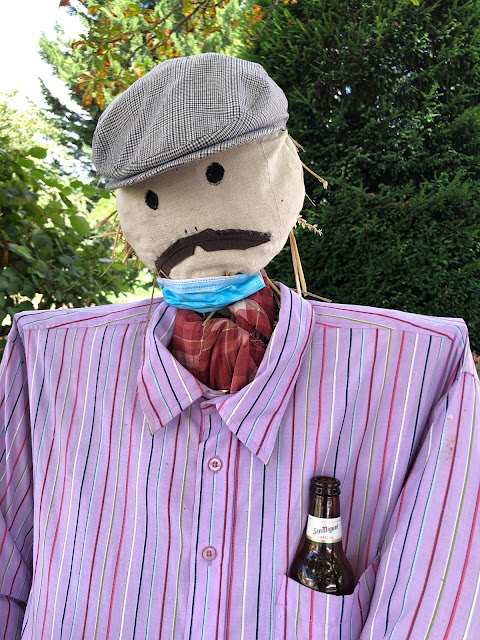 Another perfect day.Warm but not hot as we head off along the lane. 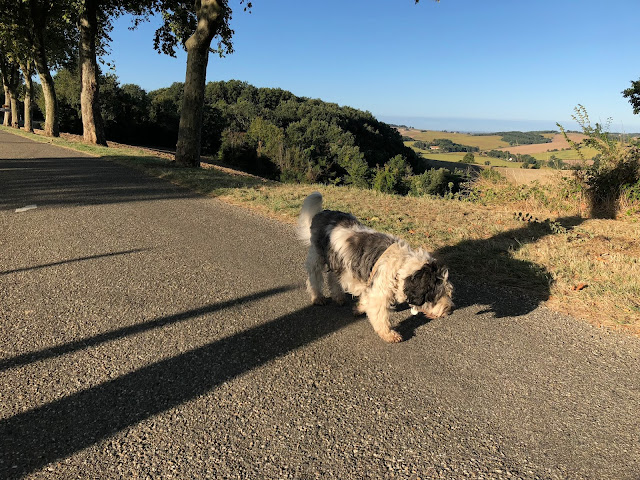 At the municipal bins we come across a giant yellow machine that has been parked there overnight. Closer examination shows it to be a sunflower harvester. The ferocious cutting blades at the front something you wouldn't want to get too close to. 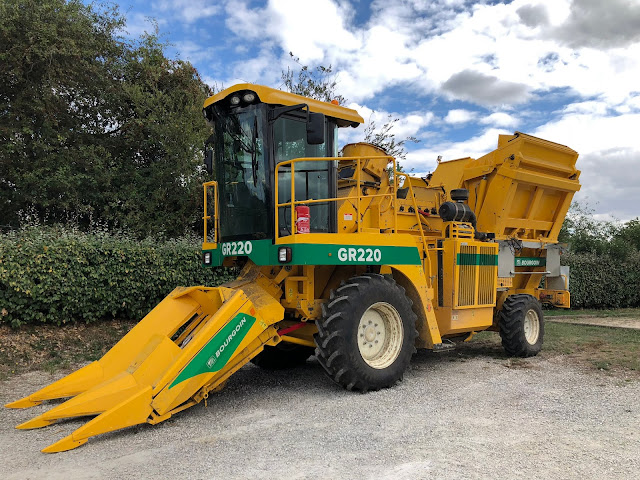 All the fields here have the sprinklers working  : https://www.reddit.com/r/Whatcouldgowrong/comments/inwe0v/wcgw_broadcasting_news_close_to_sprinkler/

The sunflower harvester is mightily impressive - never even imagined such a thing might exist, but of course it must with those vast fields of sunflowers. It's interesting that Sophie doesn't notice the cat. Sometimes Cherry will pass right by her nemesis Jack the Boston Terrier (he lives in the apartment next door) on the street without seeing him and then bark ferociously when we get home and she detects his scent in the elevator. Lately I've been attributing this to fading vision, but if I think about it, it's always been so. I guess it would make sense that sight might not be a PON's strongest sense, given the fringe that covers their eyes?

After studying generations of PONs I'd have to agree that sight isn't their primary sense. However, they can smell food from 100 miles away.

Bertie's credentials as a guard dog are probably still more limited than Sophie's. I put it down to poor vision. If he does spot a C-A-T (or other unacceptable animal) he will immediately and noisily react, but often, even one is quite close, he just doesn't spot it.
Any sort of harvester with sharp prongs out front is a particular source of concern for cyclists on narrow country lanes...
Cheers, Gail.

Hari OM
...oh... the sunflowers will be no more... Angus will have to find something else to make the reader grin wide! YAM xx

I haven't seen a sunflower harvester like that, although we increasingly have sunflower fields here as vineyards get ripped out and consolidated for mass agriculture. The grape harvesting machines are scary, too. Very tall, with vertical blades in the center, like a monster in a horror film. My kid used to be terrified when one would pass.
Why would anybody go to Spain this summer, when the virus is rampant there? And why are Spaniards coming here? For a few weeks, they have been the most prevalent tourists in these parts (judging from license plates and accents heard in town). More British license plates, too, despite quarantine. Maybe word is out that nobody polices it?

No Brits here but the car park outside the medical centre was full of Spanish registered cars. I counted 11 of them. An unusual sight in a backwater as quiet as this. Madame Bay says she went for her knee ointment prescription and found she was the only person in the waiting room who was French. Perhaps everyone in Spain has headed north to avoid the 2nd wave - lots of Madrilenos around.

What a posh scarecrow.

How strange, we are over-run with French cars here! Perhaps there is some vast house-swap in operation!
The majority of virus cases are in the north of Spain, around the two biggest cities, Madrid and Barcelona, and in the south, in Andalucia. This part of the country has been amongst the lowest for cases throughout the pandemic. Since the beginning of July there has been no shortage of tourists, and it's been business as usual.

It is a posh scarecrow - I wonder if someone is missing his Sunday best shirt!

Oh how I envy your warm but not hot weather! It was 116F on Sunday with smoke-filled sky. Today the fog has rolled in and it's a comfy 70. Just about to take the ROTTette out for a stroll.