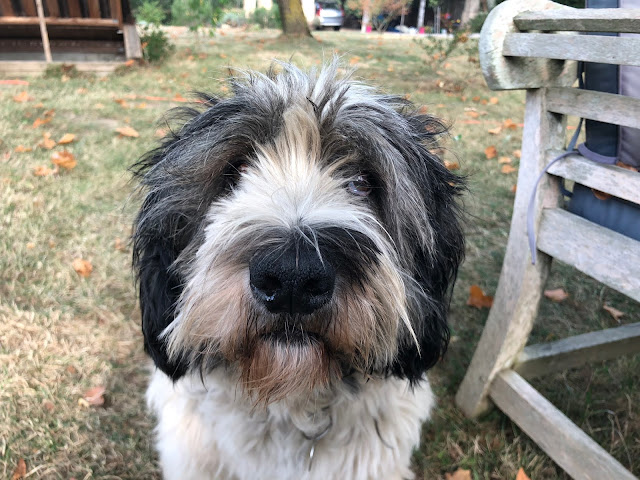 Sophie is bathed, towelled dry and brushed. How easily those words trip off the keyboard. How complex this confluence of actions proves to be in real life. Today the towelling dry is accompanied by ear piercing squeals that alert the world to the fact that she's being tortured with an electric cattle prod. Angus informs the family diva that she's a walking advert for C-A-T ownership. 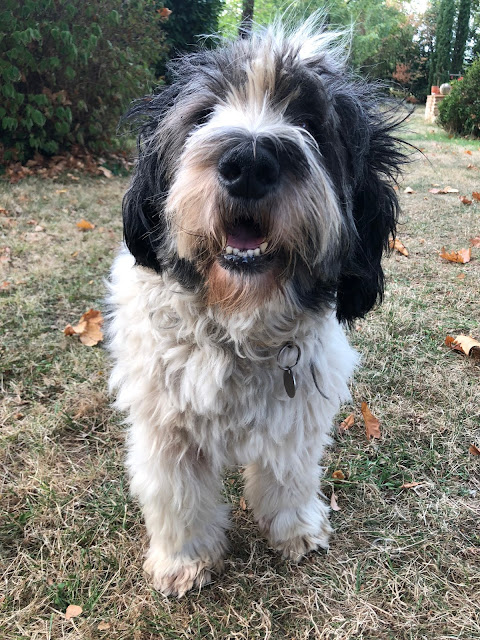 Within seconds of getting down from the garden table Sophie's morning torture is forgotten and she's ready to head off in search of croissant ends. After the traumas of canine bath time her master wonders whether a revivifying slug of Gods amber nectar might be in order but decides its too close to breakfast. 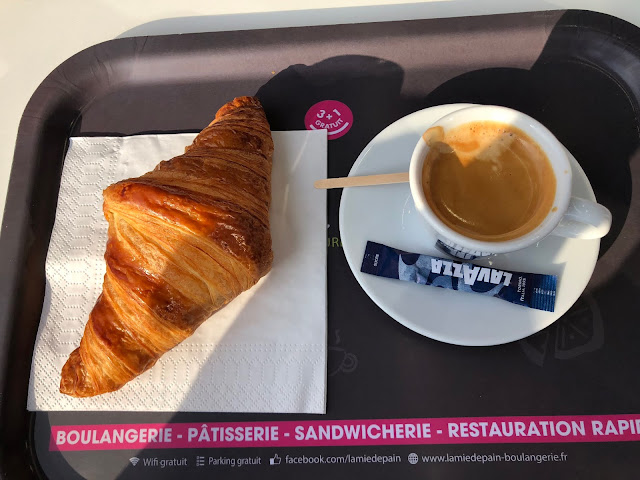 Todays croissant more than acceptable. Two men, cheek by jowl,  without masks, are busy having a heated conversation in a corner of the bakers. Angus glares at them. They carry on regardless. Some people just don't get the basics of pandemic hygiene. 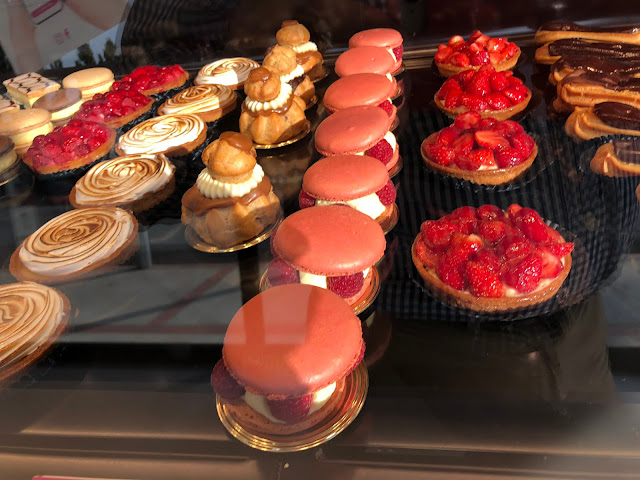 The Zoom video call requires all sorts of set up. Seems you have to tech-test Zoom calls to make sure Zoom calls function properly. Trial dialling, sound checks and so on. At the last minute the laptop decides it won't work - ie it won't hold onto a signal - so the desktop it has to be. This is something of a surprise to Angus who suddenly finds himself facing a group of earnest Americans from behind a cluttered desk in his office.  'The Font' takes the view that anyone seeing this backdrop will feel that Angus isn't spending his fees on a life of sybaritic self indulgence. It is also hoped no one focuses on the coffee cup rings on the desk. The mood amongst the folks in dark suits ? Less than 50 days to go and there is near unanimity about the popular vote, much less so about the electoral college. 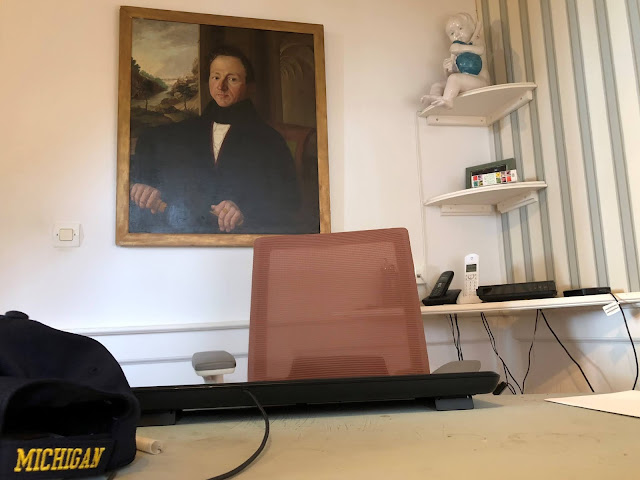 PON owners will relate to this :https://www.instagram.com/p/CE-MQ98hYu_/

The croissant looks very acceptable, the behaviour of the maskless shouting men much less so. Those sort of people are immune to hostile glares. Is this really the first time that Angus has Zoomed? Bertie and I are hoping that Sophie got a look in! Cheers, Gail.

The difference is that this is the first time to such a large audience - which is rather different to a standard family call with a sheepdog diva wandering in and out and ' singing' when she gets bored.

Something similar happened to me when I had my first Zoom meeting last spring. I had myself all set up with a perfectly dignified bookcase behind me but that computer wouldn't pick up the audio and I ended up with my treadmill for background instead. I was horrified until I saw the vacuum cleaner and realized my client was working from her laundry room.

Thank you, thank you for the Calamityware link! I have been really struggling with what to buy for Christmas this year, as most of the things from last year have hardly been used thanks to the pandemic, but you have solved my problem as to my husband. He loves blue and white willow ware, an enthusiasm I don't ordinarily share, but these designs are pretty amusing so I just ordered six of the dinner plates. Our current plates are all chipped and we keep thinking we'll buy some new ones at the pottery fair, but who knows when that can happen and in any event, as you say, these are very appropriate for the times.

Hari OM
... and then there is the growing problem (in Auld Reekie at least) of PPE litter; folk having complied just enough to be allowed to sit on the buses, then tossing their masks to the ground willy-nilly when they alight. I actually think your backdrop says 'business efficient'. YAM xx

American voting is a strange system. We have an election coming up here. You just have a party vote and a vote for your local MP. Then count them all up.