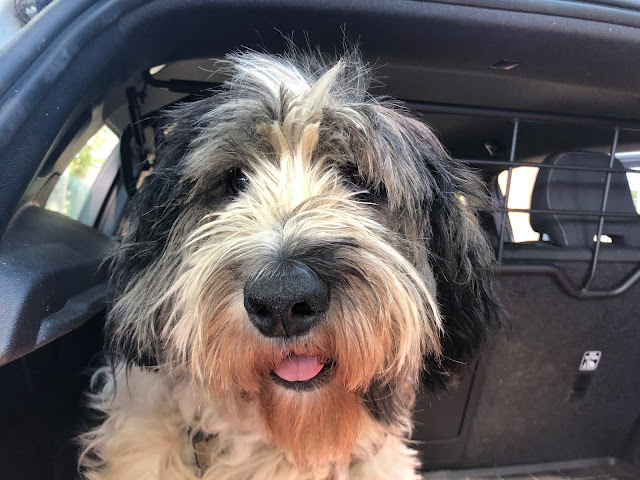 It has been some time since Sophie had a bath. This morning on our way back from the cafe I observe that her beard has turned the colour of mud.

Preparations for her bath are made in great secrecy. The shampoo bottle opened ready to pour, the hose attached to the taps to ensure the water temperature is just right, towels placed ready to mop up the excess water. 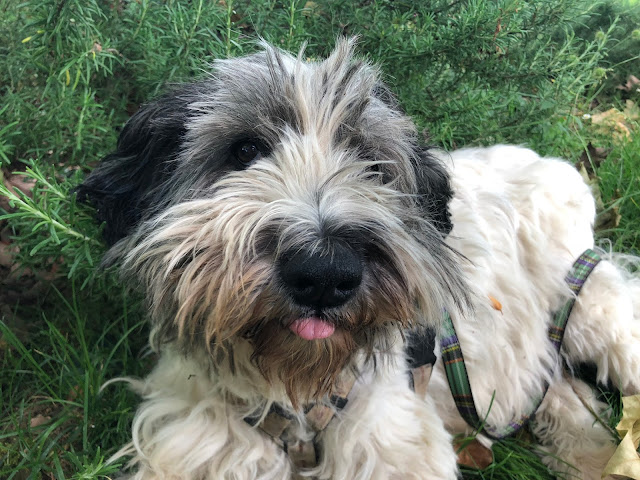 Somehow, Sophie has got wind of what's being planned. She has disappeared but is , after some searching, found hiding in a rosemary bush in the garden. She turns on her back and pretends to be dead. Then she turns on her side  and tries the same trick. Her harness is put on and a lead attached in the belief this may make her more amenable to being led towards the shower room. Treats are offered.  In practice it means we have a harness and lead attached to a PONette that doesn't intend to go anywhere. You'd think well into our third decade of PON ownership we wouldn't be so naive.

Twenty minutes later Sophie makes the mistake of heading indoors to the safety of the kitchen. En route she is kidnapped and plonked, inelegantly, in the bath. She quickly accepts her fate with stoic silence. Silence does not mean she's happy with her lot, merely accepting of it. This is the aristocrat on the way to the guillotine approach to being bathed.

Half a chilled carrot sweetens the bitter pill. We get the full  on guilt inducing  ' How could you treat such a poor maiden so ?' look. She now looks arctic white rather than 'smudgy'. Forgiveness may take a few days - or weeks. 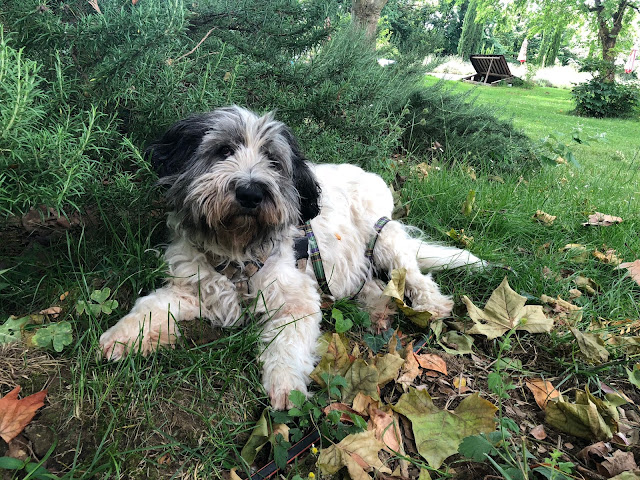 This was playing on the car radio this morning and got the day off to a good,pre-bath, start :https://youtu.be/qQrgto184Tk?t=138

From the London shop linked to yesterday - the perfect dog treat :https://www.labourandwait.co.uk/collections/latest-additions/products/dog-treats

Maybe she figured rolling in the rosemary bush would pass for a nice fresh smelling bath.

Oh, poor Sophie - surely a Jaffa cake or two would be the ultimate persuader?
It reminds me that Inca needs a shower too, and it's almost warm enough for a hose down outdoors!

While I surely feel sorry for the indignities that Sophie has been made to suffer, I am also overwhelmed by your bravery and determination. We gave up bathing Cherry after about six months. It wasn't so much the bath itself, it was the brushing out and drying that she really objected to. Weirdly, but fortunately, she adored going to the groomers. With Charlie, we haven't even attempted the do-it-ourselves route, so he will soon be off to the groomers (oddly named "Dumbo") for another herbal bubble bath. Cherry's been gone six months yesterday, and Charlie turned eight months old today. He's going through his "teenager" period at the moment, but, although the will is there, his ability to wreak destruction on the household is limited by his size.

The French teacher has a mobile groomer come to the house. We may try this but there again it may work once but Sophie would soon get wise to what's going on.

Roll on the summer heat !

Rolling in rosemay bushes has the side effect of adding more dirt and twigs to the pot pourri that already exists in her fur !

Sophie's baths are very occasional too .... perhaps that's what makes them such a dominant feature on PON ownership.