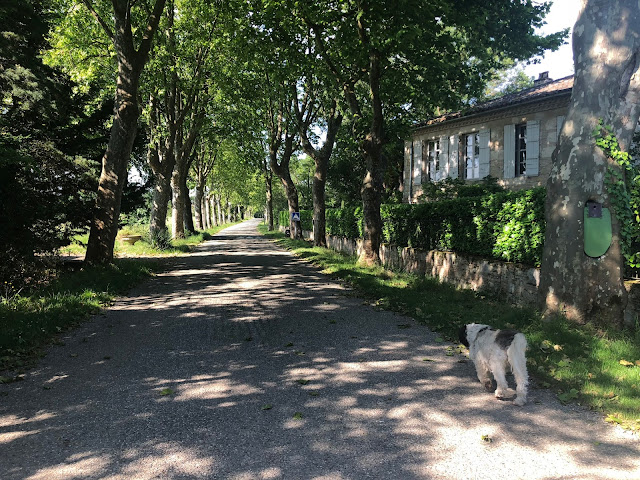 Monday, the thermometer got close to 30. Today, thunderstorms and strong winds are forecast but you wouldn't know it. Sophie's morning tour of the village is completed under skies that are bright and cloud free. 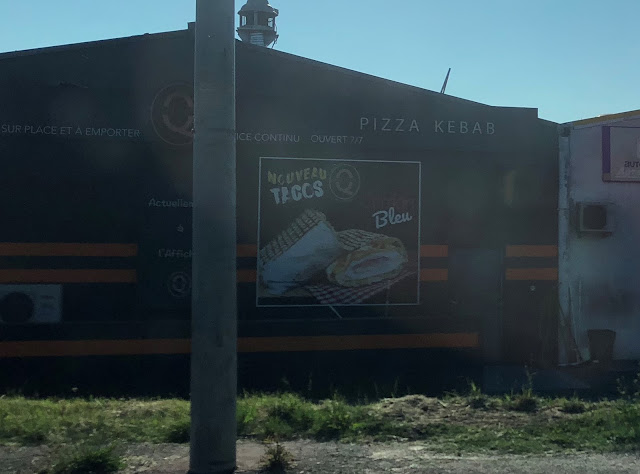 Yet another new Tacos outlet has opened up by the roundabout . It's in the building that used to have a sign informing us it was ' Your number one choice for Pizzas'. Before that it was ' Your number one choice for Kebabs'. Ham and blue cheese the variety shown on the poster. There is nothing the French love more than fast food.  For more on the unlikely advance of tacos in France this is a good introduction :https://www.newyorker.com/magazine/2021/04/19/the-unlikely-rise-of-the-french-tacos
Our croissant ok but not earth shatteringly good. Angus scores it a 7/10. Sophie is less demanding. The way her tail is wagging I'm guessing she's given it a 12. She ignores the municipal refuse workers with an aloofness that indicates 'fans' are a tiresome part of a divas life. 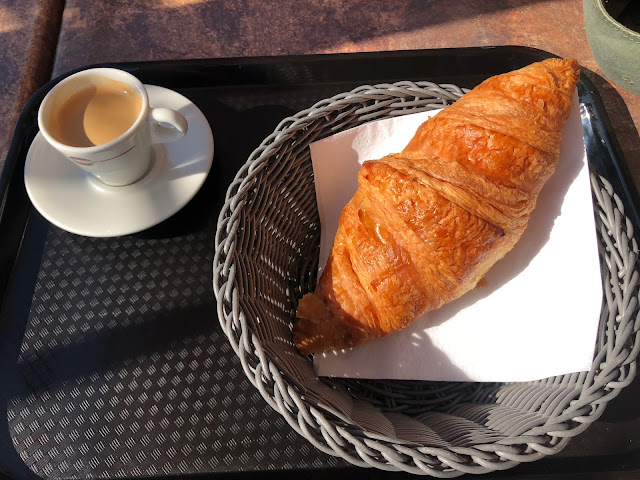 Look closely and you can see mother moorhen and one of her rapidly growing chicks heading into the yellow irises. Both mother and chicks seem to be growing in leaps and bounds. 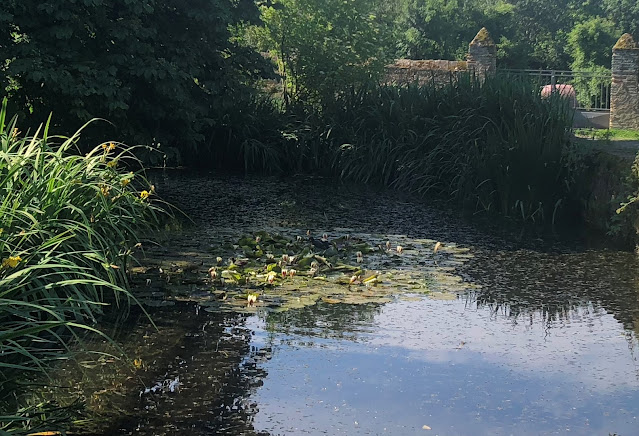 Sophie is in fine fettle and is currently waiting for the post lady to show up. A PON girls life never has a dull moment. 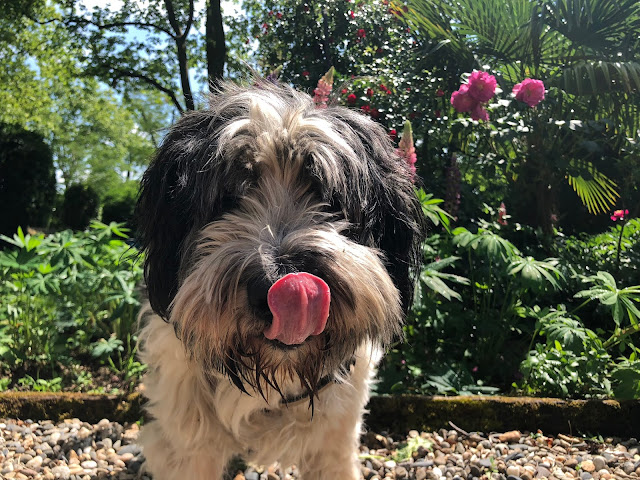 Tweet du jour :https://twitter.com/alisonmartino/status/1397552682416574467
The Ford 150 is apparently America's best selling vehicle although I've never met anyone who owns one. Next years model will be all electric and, in a twist, can keep the lights in your home burning for 3 days if the power goes out. With the 'temperamental' power supply to the village that would be handy around here. I'm not sure what the determined couple in the ad are supposed to be doing but they certainly look as though they're happy to have their home all wired up to a Ford :https://www.ford.com/trucks/f150/f150-lightning/2022/#2022-f150-lightning-homepage-image--6c6f2f74b3af2435765c5aa30176b01e-ai
Posted by Angus at 6:32 AM

For years I have wanted to open a real Mexican restaurant here. On my trips back to the U.S., I would make it a point to eat Mexican food every single day, at least one meal if not both lunch and dinner. I'm not in F&B, so that's a hurdle, but I see huge potential for big piles of loaded nachos at apéro hour. I have no intention of trying the "French taco."
Two of my brothers have F-150s. Suitable for hauling deer carcasses when hunting. Or hauling materials to build a house, which both of them did. Terrible gas mileage. The point about the battery as backup power is one of the big-picture angles of EVs--use them as distributed storage for the grid. And when the batteries are no longer nimble enough for driving, they are still good for other uses and the idea is to install them in homes to store electricity from rooftop solar panels.

Oh, wow, I'm pretty excited about Vintage Los Angeles. Although I'm from the East Coast, I'm a complete sucker for LA style. We used to live just above Sunset Boulevard on the road above the Chateau Marmont. The house we lived in was owned by the former wife of Melvin Belli, the "King of Torts," who also (briefly) represented Jack Ruby. The house below us was owned by Marvin Mitchelson, the lawyer who invented "palimony," who would stroll around the grounds in his bathrobe - we heard that house was later purchased by Johnny Depp, who also leased our former house and all the neighboring houses so that people wouldn't be able to peek down at him. And if I were to move back to LA, I would definitely buy an electric Ford 150 to tool around in. We actually have a wonderful authentic Mexican restaurant in our neighborhood in Tokyo. It's the first place I plan to visit once I am two weeks past my second shot.

I'd settle for a 7/10 croissant over a French fast food taco.
Interesting point about alternative uses for the electric vehicle battery.
Top UK temperature yesterday in Kinlochewe, just down the road from Torridon! It's even sunny in Aberdeen this morning.
Cheers, Gail.

It makes me smile to read that the best tacos, pizzas and kebabs are available in France - the home of gastronomy! Along with a decent croissant, I love brioche, and have found a very passable traditional style loaf in one of the local supermarkets.
Our weather today is exactly as yours is predicted. Earlier Inca and I took a stroll in the sunshine along by the sea, then on our way home I popped into the supermarket for a few items. I wasn't much longer than 10-15 minutes but when I came out the wind had picked up, the skies had turned a greyish navy blue and looked distinctly threatening. Now, as I type this, the thunder is crashing overhead, lightening brightening the room, and the rain is pelting down. The only compensation is that it's warm, but even that is a debatable plus, it will probably turn horribly humid later.

Hari OM
I've arrived late. Blame the fine weather. It continues in the 20-22 range here by the Hutch... please let it continue to end of week as Gail and Bertie are coming to stay - which will be my first outside contact since forever... YAM xx
(spotted the coot - thank goodness for the onboard magnifier!)