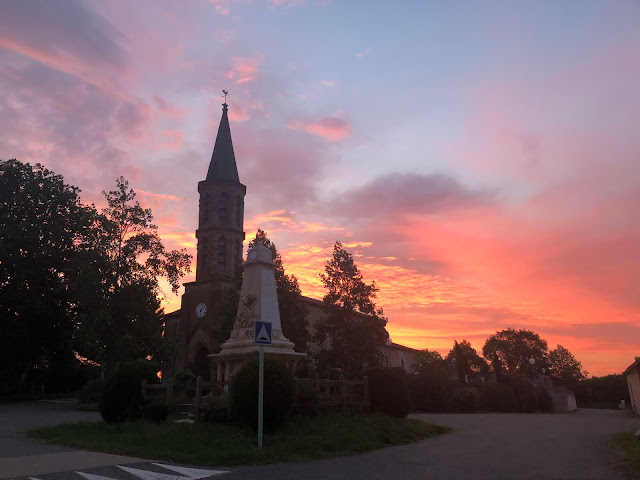 Just gone six and the morning sky aglow with orange and reds. A shepherds warning that storms are on their way ?
Eagle eyed bloggers will note that the family diva has had a summer cut. Home trimming is much less stressful for owner and diva than a trip to the groomers. I tell Sophie that the 'informal' look is all the rage. She is also told that there were no deaths from Covid in the UK yesterday. Now, that's good news. 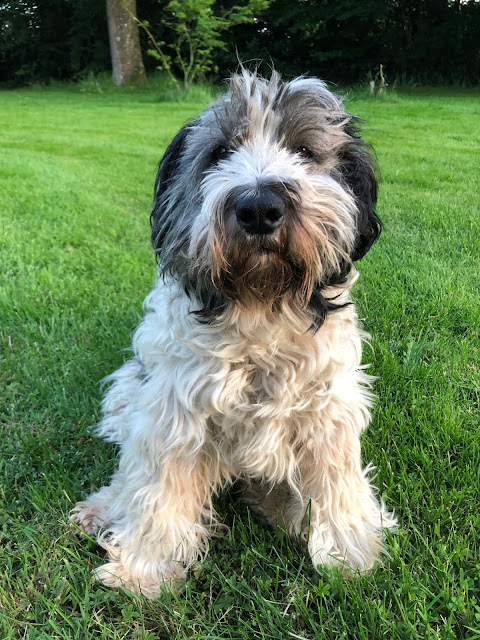 This mornings croissant looks the part but is 'underwhelming'. I'm guessing croissant quality may bear a direct relationship to how recently it's left the oven. This one has been on display for a good couple of hours and has lost it's joie de vivre. Sophie disagrees - she smacks her lips when presented with two croissant ends. She also emits some very loud snorts. The PONettes ultimate seal of approval. There is a brief shower as we're finishing off the croissant. Dog and master scurry back to the warmth of the car. We're in the little Volvo today. The big Volvo is having problems. Having downloaded and transmitted the diagnostics Angus has made no less than 14 ( yes, that is fourteen ) calls to the dealer to find out why it's playing up. No response. 'The service manager will definitely call you back today'  becoming irksome. 'The Font' wonders if ( after the ten week dispute with the little Volvo )  we've been put on a corporate data base that flashes up a sign that says ' Grumpy customer. AVOID ! '. Angus thinks it more likely that it's just abysmal after sales service. 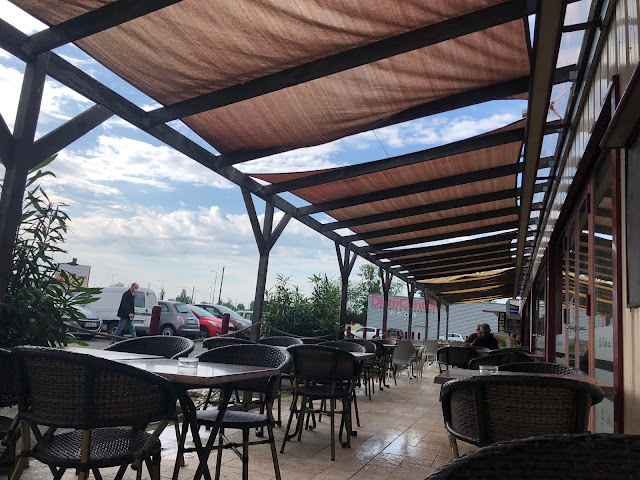 We stop off at the hardware store to have glass cut for the terrace lanterns that were delivered with broken panes. While we wait there's time to explore the aisles. Paint colours in French stores are very different from those you find in Scotland. 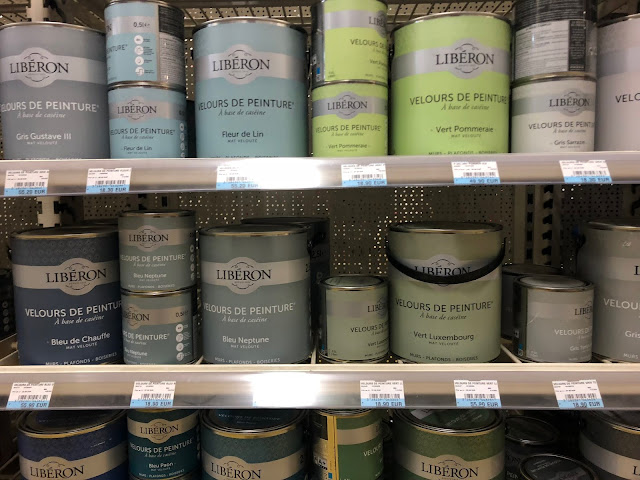 As with all languages it depends what age you start learning them :https://www.zmescience.com/science/what-is-the-hardest-language-to-learn/
Most dog owners already do:https://gizmodo.com/will-we-ever-be-able-to-talk-with-our-pets-1846924640
Posted by Angus at 6:32 AM

What a beautiful sunrise.
Bertie, who has also just had a home summer trim, notes that some dogs can even read and comment on blogs!
We are heading west this morning to escape the haar.

A very stimulating post today! Your photo at the top is beautiful, and I immediately heard, in my mother's voice, "Red sky at night, sailors' delight, red sky in the morning, sailors take warning." I guess that would apply to shepherds as well. As to grooming, Charlie pretends he doesn't like it, but the groomers sent us a video of Charlie in the bubble bath that gives it all away. And your link on languages was very encouraging, as Portuguese is in the "easiest to learn" category (another "check" for Portugal). It's very annoying that Japanese is so difficult and not really useful anywhere outside Japan. I'm pretty sure the parrot is up for becoming trilingual (anyone who thinks we can't talk with our pets, or that they can talk with us - or with each other - is invited to breakfast at my house!).

Sophie does look really svelte today - and rather proud of her new haircut. Perhaps it's relief at not having to endure the groomers, so a win-win all round?
Near neighbours, who are Swedish, have the same model Volvo as yours. I must ask them if they have had any problems with theirs. They came back with it after a trip home. If they haven't, then I wonder if the problem starts once French dealers get their hands on it - a pay back for not buying French? Who knows what their thought processes are! There is no excuse whatsoever for the treatment you've received.
We're going to take a quick turn around the neighbourhood before the rain starts up again - the ground is just about drying out, so hopefully no muddy paws.

We have very human-centric ideas about communication. Certainly animals can communicate within species and between species as well--probably, as with humans, with occasional gaffes lost in translation. Different does not mean lesser.
Some scientists think plants--especially trees and mushrooms--also communicate. Just because we can't decode it doesn't mean it doesn't exist.
With all the interest in extraterrestrials lately, I also wonder, why they are always depicted so human-like, in similar size to us, with arms and heads, etc. What if they swim through their atmospheres, which likely are different from Earth's? Or something else? And also communicate in other manners than sounds of a certain range of pitches that humans can perceive? It's too much like "When Horton Hears a Who," in which another world exists in parallel, just on a tinier scale and with Seussian curves.

Hari Om
that's that the film Arrival was all about; that the aliens were entirely different and had not learned earth language from radio signals - a film I really enjoyed for that reason! Yxx

Hari Om
the other measure of weather conditions here is the hills. I watch those hills closely. The closer the get to me the more likely it is that rain is on the way. The last three days, they were distant and shimmering. Just because I have visitors imminent, they have come several metres closer... we'll see what tomorrow brings!

I love that the paint pots have the colour on the outside that they claim to have on the inside. YAM xx

Lisa! I heard the same words in my mother's voice!

The top picture is simply beautiful. And Sophie is très chic!