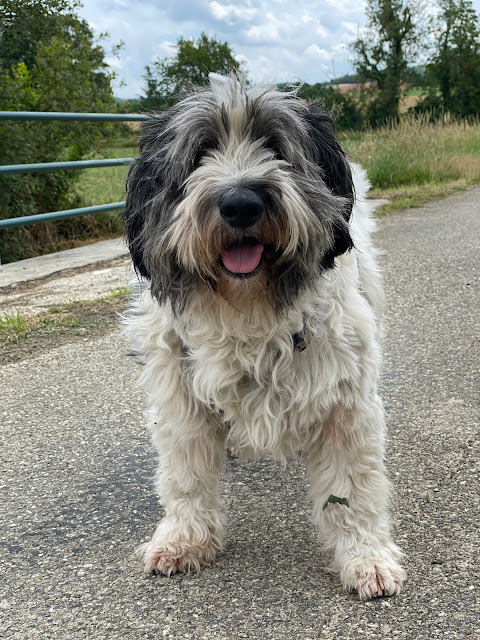 A stormy Monday morning. The heat from the Sahara battling it out with cold air from the Bay of Biscay. We manage to get our morning walk done before the rain starts. By the village hall door we meet the old mayor. The turnout in yesterdays election was low. Less than half the villagers bothered to vote. Usually they all, nonagenarians included, turn out. Out of those that did their duty the government candidate got 3 votes, the candidate for the ecologists 15. The National Front got 7.
Angus wonders if the low turnout might have had something to do with the 2020 football tournament. It's called Euro 2020 even though , thanks to the pandemic, it's being played a year late. The popularity of the tournament is enough for the baker to have made some ' Football Donut's ' for keen soccer fans  ie eight year old boys heading off to school. 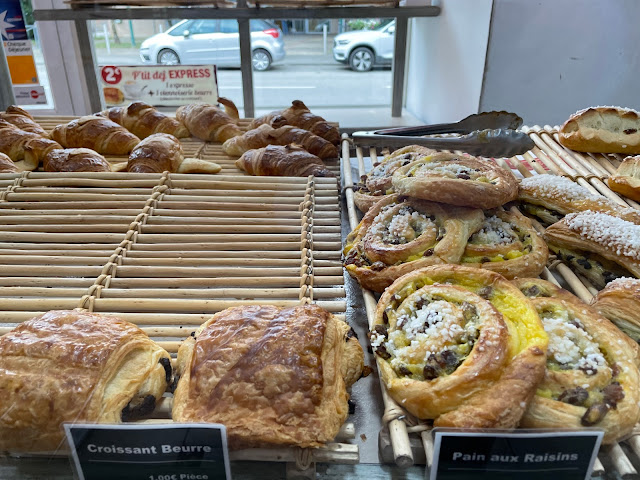 This morning we're in time to get a croissant although they seem to be flying off the shelf at a remarkable rate. Folks are heading back to work now that the pandemic curfew has been lifted and stopping en route to pick up breakfast. A sure sign that life is, for the moment, reverting to normal. Talk of the Indian variant is widespread on the UK radio but notable for its absence here in France. Why spoil a good summer ? A 'specialist' on the seven am bulletin informs his listeners that the Indian variant is 'only a problem for the English with their links to the sub-continent'.  The hotel and restaurant owners across the country will be hoping he's right. 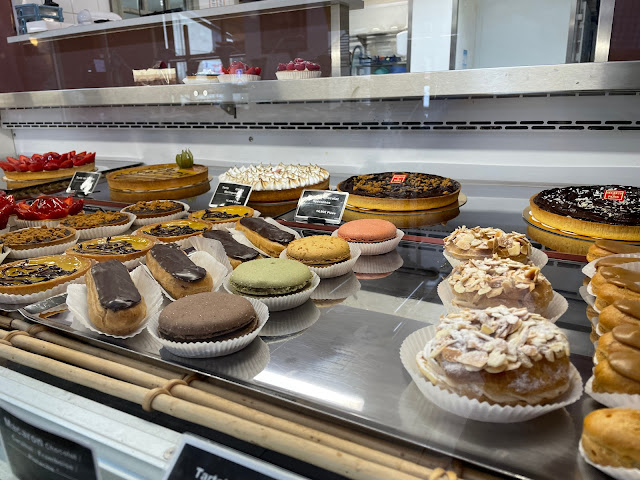 We consider picking up a couple of oversized macaroons but opt instead for two rather pedestrian looking apple tarts. Sophie is of the opinion that there is no such thing as a pedestrian apple tart ... only delicious ones. 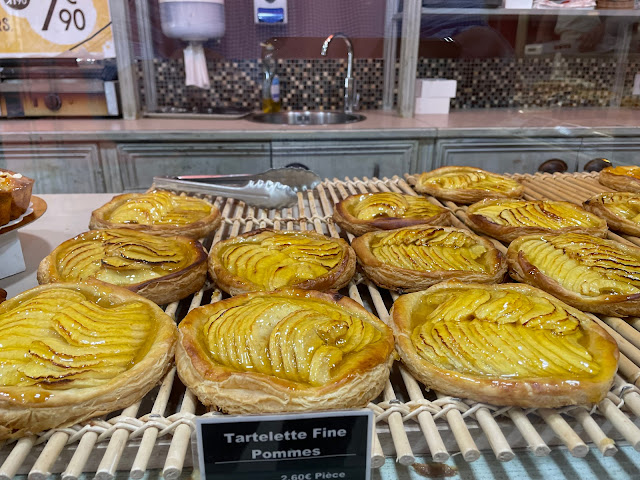 Nothing pedestrian about THOSE apple tarts. Beautifully arranged.

Interesting to note that the UK's traditional 'greengrocer's apostrophe' appears to have crossed La Manche and has reappeared at your local bakery.

The donut's might be pedestrian, but certainly not the tarts! Sophie looks raring to go notwithstanding the weather. Hard to tell what's going on with the Indian variant in Japan, as the government is diligently not testing. Our third state of emergency ended yesterday, just as we seem to be embarking on a fifth wave that is projected to peak just around the time of the Olympics. In theory, there are still some restrictions - for example, restaurants are supposed to serve alcohol only until 7 p.m. and only to singles or groups of two - but, in fact, at least in our neighborhood, nobody's been paying any attention to the restrictions for weeks now. Vaccinations are starting to roll, finally, but it's still going to take quite a while.

Just what I was going to say!

Our apologies to 'The Font', and belated Birthday Greetings. We hope that she had a good day.
Sophie looks slightly bemused by the results of the village election, and is possibly pondering the ramifications of the lack of confidence in the Government.
We certainly wouldn't turn our noses up at the apple tarts - they look good. The doughnuts (English spelling), greengrocer's apostrophe included, look just the thing for an eight year old, but not something I'd fancy sinking my teeth into.

Sophie looks quite jaunty this morning!