And consequently you lived continually in paradise. 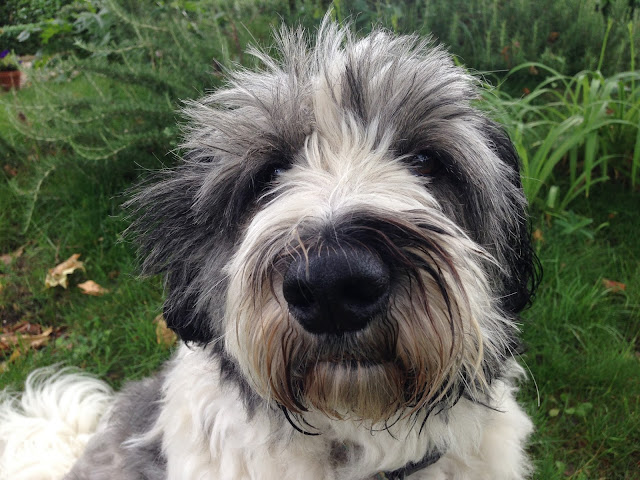 This, in translation, is a poem about a dog by a Swedish poet, Lars Gustafsson. It could be sad but it's a poem full of the wonder of life written as only a Nordic poet could write it. An insight into the seasons and the water and the light and the miraculous. Intelligent and wry.


The line, "In front of closed doors you lay down and slept sure that sooner or later the one would come who’d open up the door " made this dog owner smile. In the early morning I read it out loud to Sophie who falls asleep across my feet.  It's high summer here and we're avoiding the heat.


Elegy for a Dead Labrador
by Lars Gustafsson

Here there may be, in the midst of summer,
a few days when suddenly it’s fall.
Thrushes sing on a sharper note.
The rocks stand determined out in the water.
They know something. They’ve always known it.
We know it too, and we don’t like it.
On the way home, in the boat, on just such evenings
you would stand stock-still in the bow, collected,
scouting the scents coming across the water.
You read the evening, the faint streak of smoke
from a garden, a pancake frying
half a mile away, a badger
standing somewhere in the same twilight
sniffing the same way. Our friendship
was of course a compromise; we lived
together in two different worlds: mine,
mostly letters, a text passing through life,
yours, mostly smells. You had knowledge
I would have given much to have possessed:
the ability to let a feeling—eagerness, hate, or love—
run like a wave throughout your body
from nose to tip of tail, the inability
ever to accept the moon as fact.
At the full moon you always complained loudly against it.
You were a better Gnostic than I am. And consequently
you lived continually in paradise.
You had a habit of catching butterflies on the leap,
and munching them, which some people thought disgusting.
I always liked it. Why
couldn’t I learn from you? And doors.
In front of closed doors you lay down and slept
sure that sooner or later the one would come
who’d open up the door. You were right.
I was wrong. Now I ask myself, now this
long mute friendship is forever finished,
if possibly there was anything I could do
which impressed you. Your firm conviction
that I called up the thunderstorms
doesn’t count. That was a mistake. I think
my certain faith that the ball existed,
even when hidden behind the couch,
somehow gave you an inkling of my world.
In my world most things were hidden
behind something else. I called you “dog,”
I really wonder whether you perceived me
as a larger, noisier “dog”
or as something different, forever unknown,
which is what it is, existing in that attribute
it exists in, a whistle
through the nocturnal park one has got used to
returning to without actually knowing
what it is one is returning to. About you,
and who you were, I knew no more.
One might say, from this more objective
standpoint, we were two organisms. Two
of those places where the universe makes a knot
in itself, short-lived, complex structures
of proteins that have to complicate themselves
more and more in order to survive, until everything
breaks and turns simple once again, the knot
dissolved, the riddle gone. You were a question
asked of another question, nothing more,
and neither had the answer to the other.

The quest of the human to understand the dog....and the dog just content with the way things are going. Thanks.

I love the idea of living together in different worlds.
What dog owner has not wondered what exactly goes on in the head of their faithful friend, and how they see us.
Cheers, Gail.

Angus, you come up with the most intriguing things! Thank you

A wonderful read. Thanks for posting this.

So that's what my Labs were thinking....now I know.

A very thought provoking poem. I remember The Font wanted to name Bob, Lars. You said no, he is Bob. Bob the dog!

With the benefit of hindsight we could have settled on Bo.

"Two of those places where the universe makes a knot in itself . . ." Thank you for sharing the great wonder of this poem. Deeply touching.

the photo of Sophie is the perfect illustration for the wonderful poem. She just doesn't care about all those questions. "Where ARE those collard doves?!?" having much more significance to her...

That's wonderful. Thank you.
Is the translation from a denizen of the ROF?

Thank you for sharing that wonderful poem. A question came to me as I finished reading it: Do long cold and dark winters produce better poets?

Thank you for sharing that wonderful poem. A question came to me as I finished reading it: Do long cold and dark winters produce better poets?