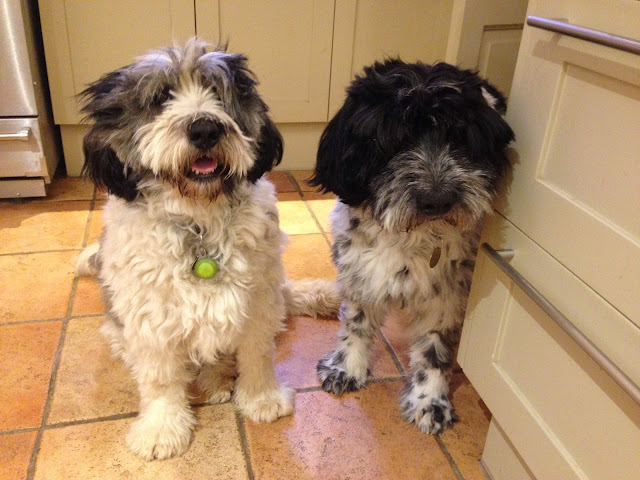 Another scorcher of a day. The PONs are out with their master at 5:30. The mayor, resplendent in a  pair of dungarees and his red plaid pork pie hat is standing in the flower beds outside the church watering the rose bushes. He greets Bob and Sophie. They, observing the hosepipe in his hand, maintain a respectful distance. The national 'Village Fleuri' committee are coming on their annual tour of inspection on July 3rd. The mayor is hopeful that we might get a second rosette. Last years attempt was ruined by The Very Old Farmers son who sprayed weedkiller over his lawn. This somehow leeched into the village pond and killed the water lillys. The judges were not impressed.

The school children have been sent home. The class rooms were redecorated over the Easter holidays and the electric fans, that were supposed to have been safely stored away, have been lost. New ones can't be sourced until next week. The temperatures inside the class rooms hit 40 degrees.

Bob and Sophie are grateful for the cold tile floors. The Rickety Old Farmhouse with its metre thick stone walls remains gloriously cool inside. 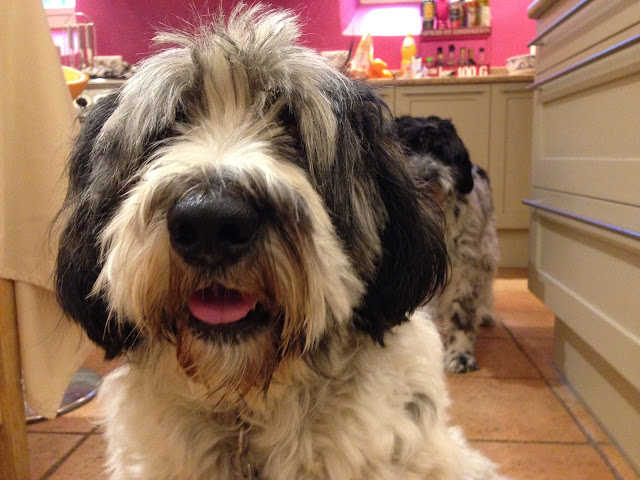 The PONs get two long morning walks and then, bar brief comfort breaks during the day, are inside until sunset and  it gets cooler . They are adjusting to the new routine with relative good grace. 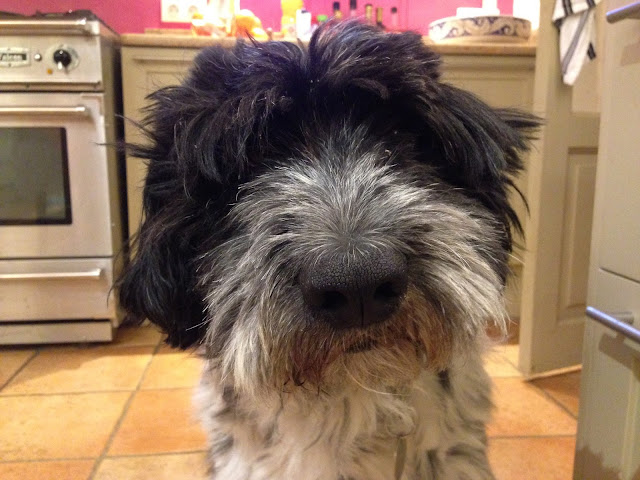 The first field of sunflowers is almost in bloom. 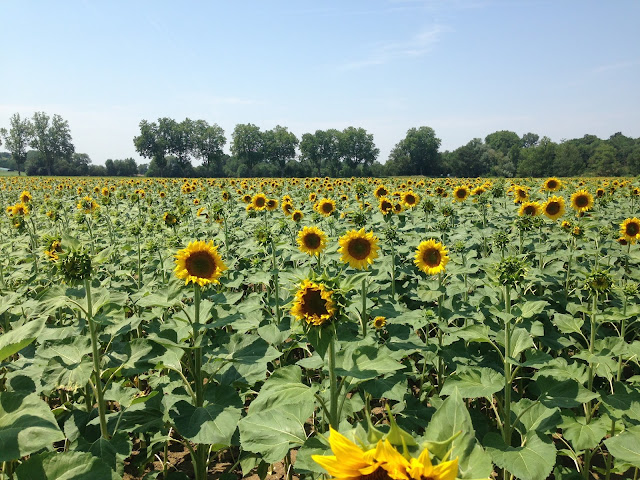 In the greengrocers local corn makes an appearance. The hot weather has again overloaded the air conditioning system . A thick bank of cold air condenses as fog which cascades out of the chiller unit onto the aisle. The PONs find this intriguing ... and refreshing. 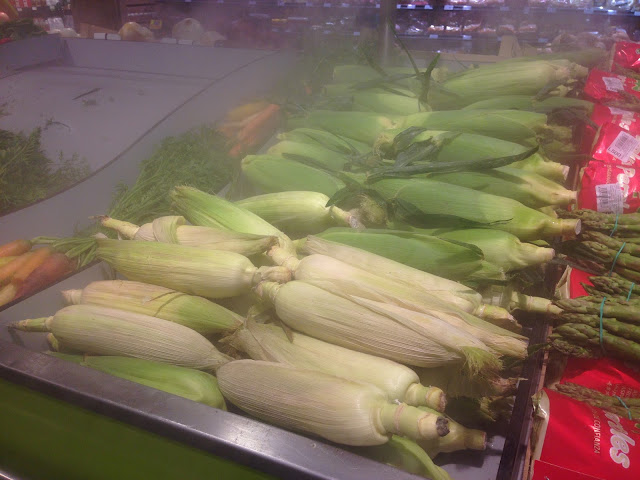 It is notable that corn on the cob has entered the European palate - I thought that might be a Rubicon - Americans eating what is solely farm animal fodder - do you ant "the font" elegantly partake of this 4th of July classic?

Inside is best when it's hot.

It's still pitch dark at 5:30 here (we're CET too) so we struggle out about 45 minutes later, when it's still supposed to be cool. This year we've noticed how much warmer it is, especially without the usual refreshing breeze. Not much fun for a girl Lab in a fur coat !

We're forecast to reach 102F here in the Texas hill country (about 75 miles due west of Austin) today.
It's been so hot in Phoenix, Arizona, that some airlines have cancelled flights. The intense heat must interfere with the mechanics of the planes. Apparently temps reached 122F (is that 50C?) yesterday.

As Sheila mentioned, Arizona is having record temps. not sure of Phoenix which is usually hotter than Tucson, but here in Tucson, we have been having temps of 115 degrees F, so mum and I only go out early in the morning cos she (and her wheelchair) cannot handle the extreme heat. Mum had some minor eyelid surgery on Tuesday, so she cannot even go into the pool (plus she cannot find any of her swimsuits!!).

Any news from the Old Farmer?

He's waiting for the results of the tests to see whether the operation needs to be done again.

With 115 degree temperatures I'd want to live in the pool. Hope the eyelids are healing quickly.

The donkeys sleep under the oaks, the cows just seem to switch off.

Bob has enough sense to lie in the shade. Sophie has no sense whatsoever and chooses to lie in direct sunshine. She is always escorted out and back in .

We love it. The French seem to cut it up in quarters before serving it.

It's not fully light but by the time we're heading down the hill to the stream the sun is starting to rise. By 7 it's 25 degrees.

My absolute favorite picture is the one of the sunflowers. I could not imagine having the opportunity to see that on a regular basis. So beautiful.
We might make it up to 32C inland in Vancouver BC, should rank as our hottest day so far this year!

Sunflowers are one of the most cheering flowers; I like this picture of the early bloomers.

The corn that is fed to farm animals is a different variety appropriately called "field-corn" which is harder and also used for many bio-based products. The corn that 'we Americans' enjoy in the summer is called 'sweet-corn' picked when it's soft and sweet - It's delicious steamed on the grill in the husks salted with butter, or boiled the traditional way on the stove.